Michael Lavers’ passion for Mercedes saw him set up Silver Arrows Automobiles in Putney, London, almost 40 years ago. He loves the 500E. It was the next four-door hot rod after the 6.3 and 6.9, beautifully built, with awesome torque that makes you want to play.’

Neil Dickens set up The Hairpin Company ten years ago and has since sold many exotic classics – but has a soft spot for the 500E and especially the E60. Many have passed through his hands. ‘Wealthy collectors want the very top, time-warp cars – it’s hard now to find really good ones.

With immaculate examples available from £20, now’s a good time to step up to the ultimate Q car. Little-known outside Mercedes-Benz aficionado circles, the 500E is rather special – and rare. All are left-hand drive and each car was hand-assembled by Porsche on its 959 production line, to standards higher than even Mercedes-Benz could manage.

Conceived to trounce the BMW M5 E34, it was faster accelerating (just) but more expensive, and it was aimed at a more refined market – businessmen who needed to cross continents in the minimum time and arrive relaxed.

In period it was £a force of almost tidal proportion’ as Automobile tester Larry Crane enthused, adding This is it. This is the best car in the world. This is the reason I work for a car magazine.

Subtlety was the theme. You’d need to look closely to spot the differences from a standard W124. These include 25mm wider.

The all-aluminium, quad-camshaft, 32-valve V8, adapted from the 500 SL, was state-of-the-art and high-revving, taking off above 3800rpm. The gearbox was tuned to ensure a seamless surge of acceleration the instant it was needed along with super-smooth changes. Where the ultimate E60 version felt dramatically fast, the standard model was deceptively rapid. Testers reported that the model’s excellent ride and handling in the dry were let down by a lack of poise in the wet, and that the traction control was over-protective. However, modern tyres improve grip.

These cars are capable of huge mileages – they’re the ultimate autobahn-eaters – and beware, because many have been clocked. Service history is vital to verify the mileage and to confirm a car has been properly maintained. A clean engine bay is a good sign, but a fully stamped service book backed up with supporting invoices is best.

Though durable, mechanicals wear out eventually – engines can top 400k miles, but gearboxes may need rebuilding by 150k.

Top sales destinations were Germany (5475 cars), USA (1528) and Japan (1167), Mercedes-Benz UK says it imported 24 examples of the 500E and five of the E500 – though MB Germany figures show 58 exported new to the UK. Genuine UK cars have the speedo marked in mph plus side indicator repeaters.

Rust is the big enemy, as on all late W124s. Front wings go first where they meet the bumper, as do the wheelarch lips. Replacements are available and just bolt on. 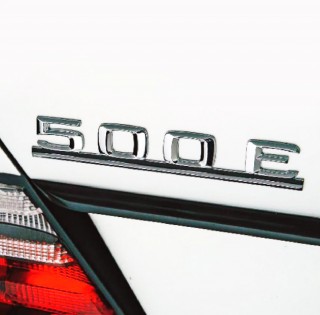 Check the inner wings and suspension strut top mounts for cracks. The same applies to metalwork around the front/rear windscreens, sunroof and rear lights, under the boot seal, inside the rear wheel arches, behind all plastic trims, under the washer bottle and the anti-lock braking system pump in the engine bay, and the boor floor. Also look behind the jacking point covers in the sills, and underneath at the front suspension wishbone mounting brackets.

The engine is magnificently durable as long as it’s been given basic maintenance, but it is advisable to replace timing chains and especially the plastic guide rails every 120,000 miles or 12 years. If this is neglected the rails go brittle, break and allow the chain to jump – or jam it, destroying the engine. Oil pressure should be 3bar when cold, dropping to 1 bar at idle when hot, but still hitting 3 bar by 1500rpm. 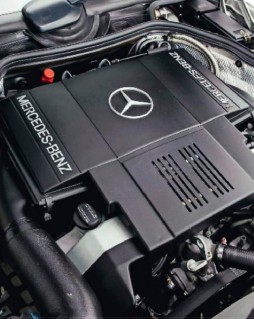 Lower readings may be caused by a faulty sender – or serious engine wear.

Gearboxes are reliable if given regular oil changes (30,000 miles), but will wear out if neglected. If there’s a power surge between changes or it clicks in reverse a rebuild will be needed very soon. Catalytic converters are not available at the moment. The centre silencer and back box costs around £150 for the centre and an original back box is £250.

Check all the electrics work – these are complex machines and infrequent use can wreak havoc. Get a technician to check the computers for error codes indicating past or intermittent problems.

Degraded wiring in the upper (and lower) engine harness, which can be replaced, causes many problems including failure of

the electronic throttle actuator (about £850). Remove the airbox to check for brittle insulation. Rough idle and low power at high revs can mean a failing mass airflow sensor and EZL ignition control unit failure causes one or both cylinder banks to cut out.

By modern standards 500E brakes are marginal. They also eat pads and discs rapidly and can even boil the fluid. E500s were better, using SL600 brakes. Upgrades are also available, the most popular being the “Silver Arrow” brakes from the R129 SL.

Used calipers usually sell for around £500 in good condition, pads and discs are c£200 new from ATE aftermarket. These brakes require at least 17-inch wheels plus on non-facelift cars and facelift lower control arms to make the discs clear the dust shields/lower ball joint (about £200 each aftermarket). For the rear, R129 600SL brake calipers cost (c£450 for rebuilt calipers) plus £150 for discs and pads. Early cars need new dust shields from the W210 to make the discs fit. Alloy wheels corrode and get damaged by kerbing; some types are costly to replace. Diamond-cut, high-sheen wheels have been unobtainable new for years – only silver finish can be found.

Interiors are very hard-wearing but high mileage takes its toll, so look for worn or cracked leather and sagging seat padding. Retrimming is expensive – even a complete secondhand interior for the W’124 Sportline (which uses the same seats) is £1200 and the E500 inserts can be sourced and fitted separately. The headlining can sag, and the rear screen delaminates at the corners. The optional electric sunroof helps hold the headlining up, but leaks and blocked drains can wreak havoc.

Check the air conditioning and climate control works – it might just need re-gassing, but more often the evaporator coil fails (a 20-hour dash-strip replacement job), as do the vacuum pods (of which each car has six, and it’s a dashboard-out job to replace four of them).

Thanks to: Bramley Motors (bramleyweb.co.uk), where the 1991 500E featured here is for sale; Mercedes-Benz Club UK (mercedes-beftz-club.co.uk); 500eboard.com

“One contemporary tester wrote, This is the best car in the world and the reason I work for a car magazine”

The badges show the Mercedes-Benz three-pointed star, but 500Es and E500s were hand-assembled by Porsche. From 1994 the 500E became the E500 with body-coloured bumpers, larger brakes and other W124 upgrades.

I first set eyes on an E500 in Casino Square at the 1993 Monaco GP-1 believe all F1 drivers were given one. For years I watched adverts until one popped up in Scotland. It had done 60,000 miles in three years, but was in very good condition.

Apart from a cracked distributor cap and worn rear top shock bushes it has given no problems. The front wings started to bubble, so I replaced them, I was recently offered £25k for it – what I paid for it 15 years ago.

My 1994 E500 is the perfect sleeper. The build quality is fantastic – really, it’s a coachbuilt automobile. Yet it can be a daily-driver or filled with luggage and taken on holidays. Servicing is easily accomplished, compared with exotics of similar performance (including the E60). I knew the car was capable of far more than I could experience safely on public roads, so I entered an open road rally in Las Vegas, Nevada, Since then I’ve returned four times, and we scored third in the 130mph average speed class in 2011. The suspension has been renewed and upgraded, with larger brakes from the Silver Arrow SL500,

Replacing the timing chains a few years ago was a major cost. I’ve also replaced the alternator (over-revved at 160mph) and had the leaking power steering pump rebuilt.

The previous owner of my 1991 500E imported it from Japan, disassembled it and bought almost everything new for a full restoration, but never started. I’d wanted one since driving a mate’s 500E15 years earlier, so I bought it.

While assembling the car I was even more impressed with some of the engineering solutions as well as the build quality. Not that much needed replacing – the cats were rattling and the throttle actuator wasn’t working correctly. I rebuilt the engine, drivetrain, suspension, steering, brakes and everything else underneath, just because I like having my cars in perfect mechanical order. I added AMG suspension bits and SL73 brakes.

External differences from a standard W124 are pretty much limited to the wheels, arches, air dam and track width

E500: Updated alongside other W124s for the 1994 model year. About 2600 built up to September 1995, Larger brake discs, body-colour bumpers and facelifted headlights, grille and bootlid. Prices are 10-20 per cent above 500E, and condition and mileage count for more.

Popular upgrades range from reprogramming the ECU to removing the speed limiter. Boosting the standard engine to 600SL or AMG spec and even up to 6.5 litres has been known.

Larger wheels and lower-profile tyres are popular modifications, but be wary of nonstandard wheels, which may not fit well; 16in rims are best for comfort, up to 18in for grip and handling. Another popular trick is to modify the automatic transmission to start in first gear rather than second – it will normally only start in first if the accelerator is floored, resulting in a jerky kickdown (or by moving the gearlever first to B, then to D).

Find detailed advice on upgrades and all aspects of these cars on 500eboard.com – joining is a must.

5.0 V8 can top 400k miles, if looked after. Cabins are hard wearing but non-working aircon is costly to repair.