YOUNGTIMER Turbocharged by German company Lotec in the 1990s, this 317bhp 320E is now for sale in the UK.

“Following the engine modifications, Mr Kellermann took the car to then independent AMG in March 1994.”

Trust me, it really does go well,” says Kris Petrov, owner of the Lotec 320E that I find myself driving. Keen to explore what the addition of a Garrett T03 turbocharger has done to this W124’s road manners, I slow the car to walking pace, select first on the dog leg gearbox (the same ZF unit that can be found on the 16-valve 190Es) and following a quick check in the mirror I stamp on the accelerator pedal and prepare for the turbo to kick in.

As the rev needle soars past 4,500rpm, by which time the speedo is nudging 80km/h (50mph), it quickly dawns on me that a massive, peaky punch of power won’t be coming. There is simply a linear and very refined delivery of the certified 317bhp – an improvement of 100bhp over a standard 320E. Sadly, Kris can’t say for sure how much extra torque the turbo offers, but we both agree there’s more than the standard 229lb ft at 3,750rpm. 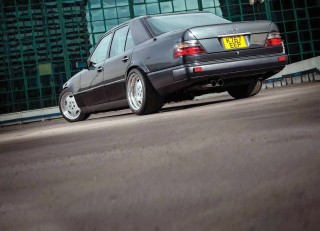 I have merely glimpsed what the car is capable of, but Kris has a much better idea, having driven it home from Germany after buying it. “I’ve had it up to 220km/h [137mph] and there was still plenty of power left. I took it no higher mainly for my own personal safety, but also because I had my wife with me and she was not happy with me going at those sorts of speeds, ” he explains. “The gentleman I bought it from told me that the car was TÜV [Technischer Überwachungsverein – Technical Inspection Association] approved in Germany up to 260km/h [162mph], but when it had TÜV approval it was with a standard Mercedes exhaust, but it now has a stainless steel sports exhaust fitted to it, which should be releasing a few more horses.”

The matter of the exhaust hadn’t gone unnoticed during my time behind the wheel. Dropping the window a little on our run, I was able to savour the purposeful sound emanating from the twin tailpipes, which give a statement of capability rather than simply seeking to attract attention. Addictive may be too strong a term, but were this my 320E, I’m pretty sure every journey would involve a minor detour through a tunnel or an underpass to savour those smile inducing sounds.

Leaving Sindelfingen on October 5 1992 and registered in early 1993, the 320E was bought by Fritz Kellermann of Rothenburg in Germany, who shortly afterwards set about transforming of the car, handing it over to renowned German tuning company Lotec. The firm promptly fitted the Garrett T03 turbocharger along with the associated intercooler to Mercedes’ M104 straight-six, a power unit that could be found in pretty much every model range that Mercedes was producing in the early 1990s, such was the company’s belief in its engineering make up. In addition to the turbocharger, you’ll find a Lotec-Novotronic control box on the inner side front wing, which remaps the engine management system to ensure the changes to the fuelling, induction and extraction of exhaust gasses are catered for. 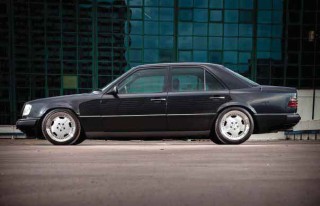 With the engine upgrade complete, the next step was to change the wheels, the original 6.5Jx15 front and 7Jx15 rear items replaced by 7.5Jx17 and 8.5Jx17 alloys respectively. As is the requirement in Germany, even for a simple wheel swap the car then had to undergo TÜV assessment, the 320E gaining its certification on July 12 1993.

Following the engine modifications, Mr Kellermann took the car to then independent AMG in March 1994. The company stiffened and lowered the suspension, and fitted SP8000 tyres, size 235/40/17 up front and 255/40/17 at the rear. AMG also fitted wings from the 500E to accommodate the meatier road stance. At the same time, clear lens front indicators replaced the original orange items, and darker light lenses were added at the rear – all of which required further TÜV approval.

On the congested roads of south London, I did not expect to properly test the car’s suspension, but within five minutes I was seduced by just how well it was coping with the far from perfect roads. Granted there is a degree of road noise from those impressively sized tyres, but for the most part the car feels planted and solid, resolutely refusing to let any imperfections in the road’s surface reach occupants. Kris, of course, has a far better understanding of the car’s handling capabilities, saying that “it feels very secure and very comfortable.” 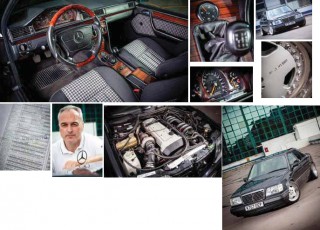 Whilst the upgrades were taking place, the owner fastidiously kept up with his annual Mercedes-Benz service schedule, right up until he sold the car to his brother, Peter Kellermann, in September 1995, whereupon it received a new stainless steel exhaust, for which the car once again underwent TÜV approval. The 320E was then sold to its last owner before Kris, one Mr Juri who, despite keeping the Mercedes saloon garaged most of the time, had the engine rebuilt and fitted a new set of Bridgestone tyres.

“I previously owned a W124 3.4 AMG, but I didn’t really get on with the automatic gearbox, so I sold it and started looking for something even faster – with a manual gearbox,” Kris remembers. “Someone told me about this Lotec tuned W124, so I had a look at it and really liked what I saw – the car was on a new set of Bridgestone tyres, I liked the exhaust sound, and how it sat on the road, so I bought it. That was back in September 2015, and I drove it straight home from Stuttgart via France. I really enjoyed that drive. It’s such a nice, fast car.”

Formed in 1962 by Kurt Lotterschmid, Lotec began as a racing car constructor with its design taking six wins in the 1969 Formula V series. The year 1975 saw the company develop bodykits for Porsche models. Come 1990 and it had built the unique C1000 supercar for a customer in the UAE, a Mercedes V8 twin-turbo engined monster with 986bhp and a claimed top speed of 268mph (see our October 2014 issue). One year later, Lotec produced the Ambassadeur, which could be a tongue-in-cheek take on Mercedes’ 300 ‘Adenauer’. In 2000, Lotec launched the Sirius, another supercar with Mercedes power at its heart, this time a V12 twin-turbo generating 1,183bhp.

TÜV is an abbreviation of Technischer Überwachungsverein which translates as Technical Inspection Association. This is an umbrella name for a number of organisations that work to ensure that all types of products, not just motorcars, are safe for human beings and the environment, with many of the organisations responsible for the administration of International Standards Organisation certifications (ISO). As well as administering driving license tests, any modifications to a car – even something as simple as fitting a new set of alloy wheels – require TÜV approval, resulting in a documented change to the vehicle’s specification, after which the car can be used on the road.

“The car feels planted and solid, resolutely refusing to let any imperfections in the road’s surface reach occupants”