CLASSIC CHOICE Prepared for the race track yet entirely street legal, this 300SL ‘California Outlaw’ is a one-off!

There are sports cars and then there is the 300SL. As one of the most desirable classic cars in existence, the W198 Mercedes-Benz has achieved unique celebrity status, and Thomas Rosier of Rosier Classic Sterne in northern Germany can call a very special version his own.

By all accounts the 300SL is one of the most beautiful cars in history, a legend, a dream on four wheels. Premium level in all respects – a car that entranced New York when it was unveiled at the International Motor Sports Show in 1954. Born as a racing car, celebrities cruised the famous boulevards of the world in it. Mercedes-Benz made a statement at the right time and showed the world that Germany was still able to build motorcars with superior technology. Mere years after the unconditional surrender of the Third Reich, the Swabians presented a car which symbolised the determination of a whole nation.

And what a start: in 1952 racing form, the 300SL won races such as the Carrera Panamericana and Le Mans. Two years later the road car followed, and no matter which manufacturer a person loved most the 300SL’s beauty was universally applauded. In many ways this car was the epitome of Germany’s Wirtschaftswunder, the economic miracle. 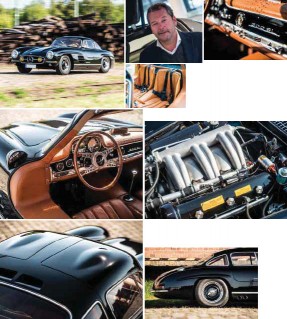 The 300SL’s M198 engine was based on the 300 Adenauer’s M186 motor, but enhanced with higher compression and fuel injection – the latter aspect a first for a Mercedes-Benz and helped to produce 212bhp at 5,800rpm. Peak torque of 203lb ft arrived at 4,600rpm – and by that time the engine really was roaring! The block was tilted 45 degrees to fit under the low bonnet line, and a dry sump lubrication system was added too.

The Mercedes’ form was unique. And taking into account that people in those days travelled at a maximum speed of 50mph, the speed of a 300SL was breathtaking – this coupe capable of up to 162mph depending on the rear axle ratio. It is this mixture of cutting edge design, motorsport pedigree and rarity (only 1,400 were made in under three years) which makes the 300SL a highly desirable and fascinating motorcar.

RACER FOR THE ROAD

Complete with an ostrich leather interior, Thomas Rosier calls his 300SL Gullwing the ‘California Outlaw’. It was in 1927 when his grandfather laid the foundations of the Rosier Mercedes dealership. Thomas’ father inherited a huge interest in cars – beyond the usual business. He purchased this 300SL in the USA in 1986, before selling it to a local customer three years later to fund Thomas’ own business, a Mercedes-Benz dealership in Oldenburg, Germany. Decades later, at the end of 2014, Thomas was offered a black Gullwing…

“I was stunned by the car’s grace. It was love at first sight,” he remembers. “But I had no idea that it was the very same car that my family owned previously.” One thing led to the other, a deal was done and a few weeks later, in early 2015, the 300SL Gullwing arrived in Oldenburg – delivered with the original numberplates used by his father. That was precisely the time when Thomas Rosier’s passion for classic cars reached a whole new level. 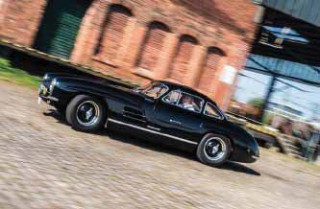 Apart from the connection to his family, what else about this SL fascinates Thomas? While in the US, the 300SL was rebuilt to the individual requirements of the previous owner for racing purposes, gifting it some very distinctive features. Most noticeable is the complementary contrast between the cognac coloured interior and the black body colour; the seats, dashboard and the racing roll bar are all covered with ostrich leather. The material’s texture may polarise enthusiasts, but the quality of craftsmanship is indisputable. Elsewhere, a handcrafted four-spoke steering wheel fits in perfectly with the philosophy of competitive motoring, while the combination of 205/70VR15 tyres on black Rudge wheels enhances the sporting ambience further still.

The exterior is backed by a range of special equipment and systems under the bodywork. They guarantee a high degree of efficiency, dependability and safety, and comprise an aluminium fuel tank, an integrated fi re extinguisher system, Koni sports suspension, an NSL motor racing clutch with hydraulic release bearing, a side exhaust system with temperature monitors, and a modified ignition system – all of which radically improve the characteristics of the car.

Arguably the most distinctive and beautiful modifications, however, are the bubbles in the door tops which form the roof area. Helmeted occupants would be restricted without them, as the previous owner also saw fi t to lower the roofline by an incredible 80mm, while adding a small sports mirror on the front wing, plus integrated foglights, and minimalist bumpers – all to re-emphasise the car’s swooping shape.

And how does it drive? Sharp. Precise. Defined. No messing about. It drives as it should. It feels at home both on the ’Ring and country roads alike. Back in Oldenburg, this Gullwing is a symbol of what unites all employees in Rosier Classic Sterne: a sense of what makes cars unique. “We are passionately committed to restoring cars in a creative and innovative manner, and to a very high standard,” says Thomas, whose company has achieved the rare certification of Mercedes-Benz Classic Partner and is thus one of only 10 in Germany.

Optimising the spatial and technical prerequisites, Thomas created a 1,200-square-foot, bright and modern workshop hall. Recognising the potential importance of a perfect infrastructure for restoration work, Thomas put almost all areas under one roof, including engine reconditioning apparatus and a body shop. Only saddlery and carpentry work are done by a third party. There is even an 800-square-foot warehouse stocked with new parts available for customers to buy through the company. Rossier Classic Sterne would not be complete without a successful sales operation, and the company will source cars for clients upon request. You could call that a full house.

In 2011, Rosier Classic Sterne GmbH was recognised as a ‘specialist for historic vehicles’ by the German Association of the Automobile Industry. Web www.classic-sterne.de Tel +49 (0)441 209 780-10

Thomas Rosier of Rosier Classic Sterne. A hand made steering wheel; smaller mirror. Ostrich hide provides a unique twist. Four-point belts for the bucket seats. 300SL defined by its doors and 212bhp engine. Space had to be made for racing helmets. Superb Rudge wheels, and side exiting exhaust. Roofline sits 80mm lower than standard.

“Arguably the most distinctive and beautiful modifications, however, are the bubbles in the door tops which form the roof area”