There’s no denying that the E60-generation M5 has mellowed into a true-blue modern classic. While critics were sometimes quick to decry the design finesse of the Bangle-era BMWs, the E60’s shape, in particular, has a certain timeless quality which still looks crisp and fresh today – it’s almost surprising to think that this is a model which went out of production a decade ago… and that this generation of 5 Series first hit the market way back in 2003! 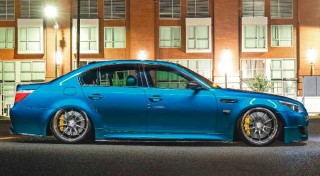 None of this is lost on Rommel Canlas of Santa Clara, California, who’s gone to great lengths to accentuate the evergreen form with contemporary mods, to bring the E60 M5 kicking and screaming into 2020. And he’s an eminently appropriate puppetmaster for such a task, given his frankly quite astonishing obsession with BMWs. It goes without saying that we come across a lot of truly committed Beemer fans in our line of work, but Rommel is markedly more devoted than most. Just check out his current stable – taking up garage and driveway space at the Canlas household right now are, in chronological order, an E36 M3, an E46 M3, this E60 M5, an E70 X5 M, an E90 M3, and an F80 M3. The E36 is currently under the knife, receiving a full Varis kit and Dinan Stage 2 tune. Suffice it to say that if you cut Rommel open, little BMW roundels will spill out (not literally, please don’t try that), and it’s the M badge in particular that appears to have wrapped him up in its exotic and tantalising wiles. “My first car back in 1997 was an E39,” he says, which explains a lot. We’ve got a lot of time for the E39, it was stellar when it launched and it hasn’t got any less brilliant since. You can imagine why taking that model as a starting point would launch somebody off into a lifetime of marque loyalty. “It’s the ride quality and the style that makes the BMW brand special to me,” he says, and again that makes perfect sense.

“The performance upshot of all this is 542hp and 398lb ft, creating something that magnifies all of the very best elements of this stellar engine and makes them, well, more. Harder, better, faster, stronger”

We hardly need ask why he bought this E60 M5 then, and the answer isn’t a surprise: “It’s because of the sound of the V10,” he grins. And he’s right, the S85 offers the same sort of visceral resonance, at once guttural and sibilant, that one might encounter when battling a chimaera or giving Medusa’s hairdo a hard time. Even in stock form it’s an absolute hellbeast of a motor, the 5.0- litre headbanger boasting an aluminium block and DOHC heads, double-VANOS, individual electronically-actuated throttle bodies, aluminium oil-cooled pistons and a forged crank along with a quasi-dry-sump setup. This was all enough to serve up a vivid 507hp and 384lb ft in showroom spec – and, crucially, the S85 revs to 8250rpm, howling with a wail that makes angels weep.

Entertainingly, this lunatic world-crusher of an engine is something that Rommel viewed not as endgame, but merely a starting point – a reality evidenced by the fact that he’s thrown the entire Dinan catalogue at it in order to angry the thing up even further. “I always choose Dinan when it comes to performance mods, that’s the plan every time,” he says. “With the M5 I’m running Dinan’s Stage 3 performance software, along with its high-flow throttle bodies, high-flow air mass meter/intake, and 13% underdrive crankshaft pulley kit and replacement belt.” The howling fury of all this is colourfully accentuated by a Supersprint X-pipe and Tubi exhaust, and it’s hard to put into words quite how furious it sounds; that said, if you stick your head out of the window right now, wherever you are in the world, the odds are that you’ll probably hear it. The performance upshot of all this is 542hp and 398lb ft, creating something that magnifies all of the very best elements of this stellar engine and makes them, well, more. Harder, better, faster, stronger. The addition of a Dinan LSD certainly raises a smile too. This California-bred bruiser isn’t all about racing between the traffic lights, it’s been made for thrills.

“The car was in very good condition when I bought it,” Rommel continues. “I got it from a friend, and he’d really babied it. The first thing I did to it was fit the Wald body kit – I knew that design was the one I had to have because it looks so aggressive and yet classy at the same time, and you don’t see many E60 M5s with this kit at all. Jesus from German Auto Body moulded it to the bumpers so it looks clean; it took him three months to perfect it, partly because I ended up changing the colour from Interlagos blue to Atlantis blue.” This was definitely the right way to go, as the chunky and imposing lines of the M5 work beautifully with the summertime vibes of this superb paint shade. It’s not something you see a lot of on the E60, you’re usually more likely to find silvers, blacks or greys with these big-booty 5ers, but the feelgood brightness of it is a refreshing and perfectly judged reworking of the familiar form.

“The first thing I did to it was fit the Wald body kit – I knew that design was the one I had to have because it looks so aggressive and yet classy at the same time, and you don’t see many E60 M5s with this kit at all”

At the beginning of the project, Rommel fitted the car with KW V3 coilovers, although as the build progressed he had a conceptual change of heart and decided to fit Air Lift Performance suspension with 3P management instead. “I decided to use airbags so I can use the car in pretty much any place, unlike when I had coilovers which limited where I could go,” he reasons. An eminently practical solution, there’s no arguing with that, and it certainly looks badass as hell when it airs out. This is also thanks in large part to the rather splendid wheel choice. Again, this is something that Rommel addressed quickly after buying the car and then changed his mind about; to begin with, the M5 was treated to a set of DPL SL5 three-piece split-rims which is, of course, a very fine choice, but when he spotted the current design his head was turned quicker than a distracted boyfriend meme. “I saw the Advan RZ-DF wheels at SEMA and I just had to go for it,” he says. “They’re pretty lightweight, and I just love the deeplip look.” It’s an attractive double-five-spoke design, with the slender spokes and significant gaps between them offering the perfect opportunity to show off the brakes behind. The factory-standard M5 stoppers do a decent enough job but there’s plenty of room for improvement, especially in the looks department, and if there’s one state of mind that truly characterises the V10-engined brute, it’s that more is more and bigger is better, so Rommel’s seen fit to swap in a Brembo GT big brake kit at either end. Very pleasing to the eye, isn’t it? And the devastating nature of the retardation is almost enough to entirely separate face from skull when he jumps on the brake pedal, which is no surprise when you consider it comes with massive 405mm discs with six-pot calipers up front and a 380mm disc and four-pot caliper combo at the rear. 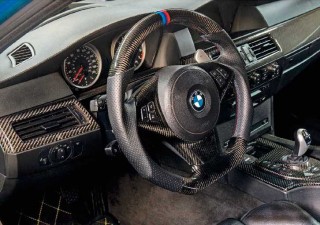 This theme of form and function working in harmony is one that continues to the interior. No-one could ever accuse the M5’s innards of being sub-par in stock factory guise, but Rommel’s keenness for levelling-up knows no bounds, and the most noticeable upgrade here is the carbon fibre steering wheel – a Dinmann item which is complemented by a platter of accompanying carbon trims from the same source. Audio upgrades were dealt with by Music ‘N Motion, who upgraded the speakers with MTX ones and added a pair of subs and amps into the mix in a custom boot build. Avila Custom Upholstery in San Jose was then drafted in to retrim the seats in sumptuous diamond-stitch Alcantara, along with trimming the door panels to match. The overall effect is one of sportiness as well as premium luxury, which is very much in keeping with the M5 ethos. And if carbon’s your bag, check out the rest of the exterior upgrades; it’s not all about the Wald body kit and killer paint, Rommel’s also done his research and cherry-picked an assortment of high-end aero parts to take things to the next level. Dinmann was once again tapped up for goodies, supplying the carbon fibre side skirt blades and rear blades, while the CF roof spoiler is a Hamann piece.

While it’s true that the E60 design has mellowed into something almost timeless in a modern context, sometimes evolution does benefit from a helping hand; a little human intervention to grease the wheels and ease the progress. That’s precisely what Rommel’s done here. A serial BMW enthusiast, tapping into his lifelong passion to reframe the M5 in today’s image – it’s got the looks, the power, the luxury, the stance… a classic formula with a contemporary twist.

THANKS Thanks to Jesus at German Auto Body, Canan at Dinmann, Devin at Speed Element, Menard and Andrew at Music ‘N Motion, and David at David Auto Works 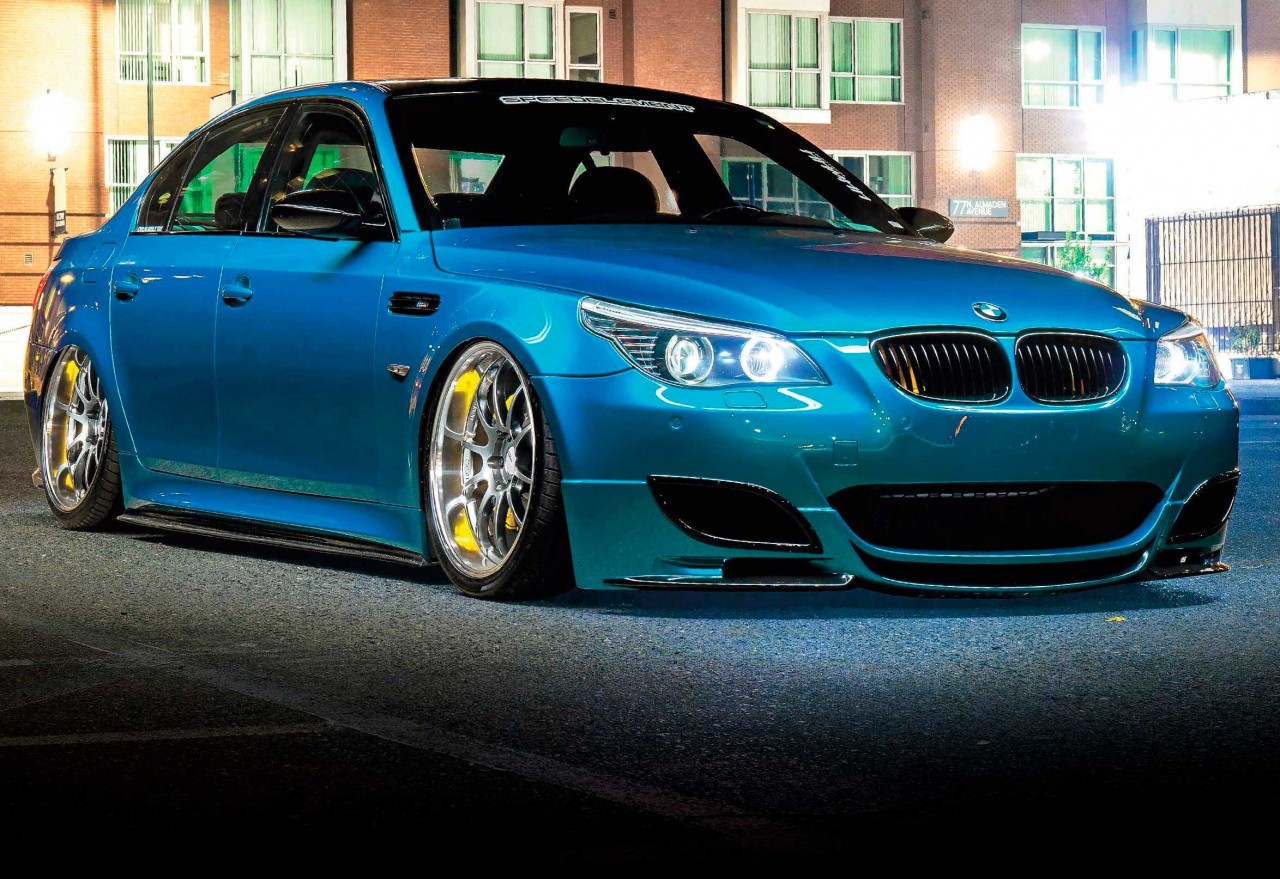 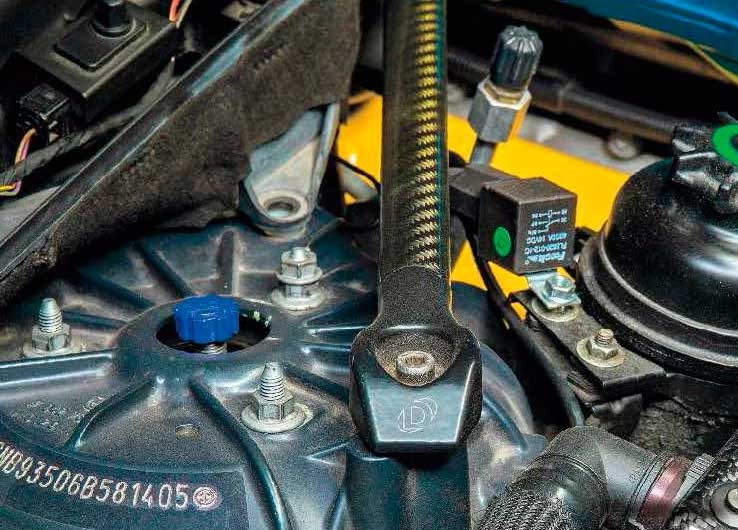 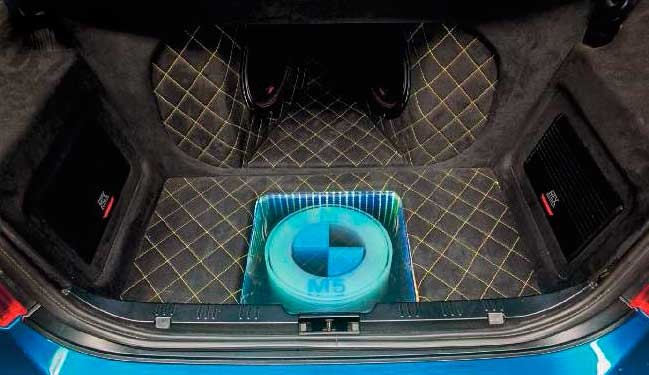 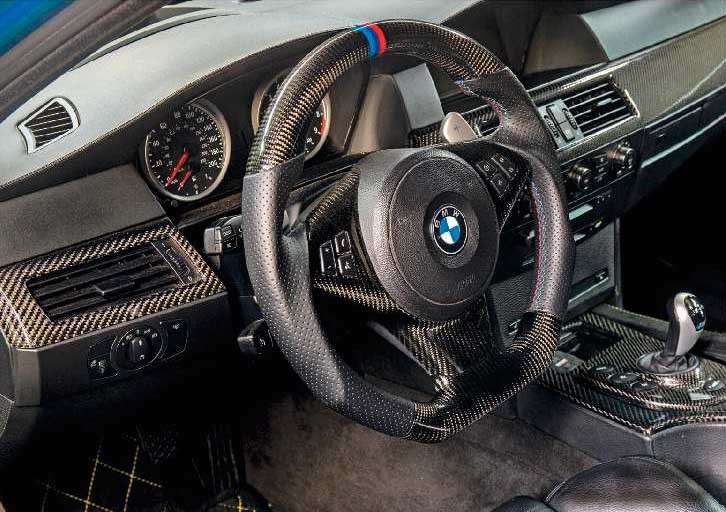 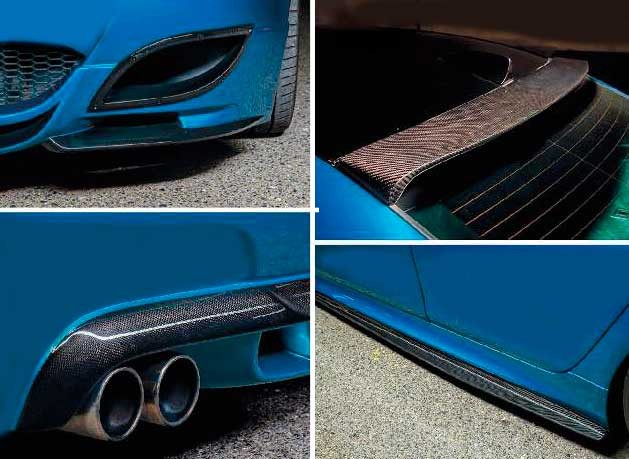 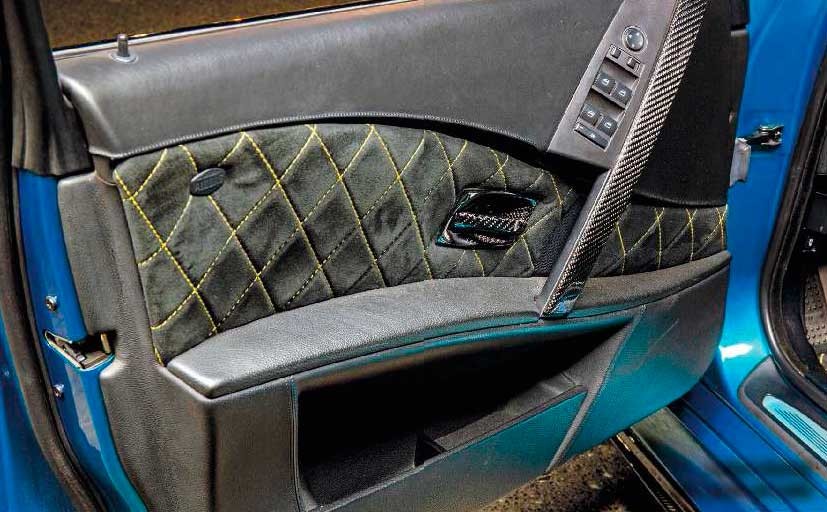 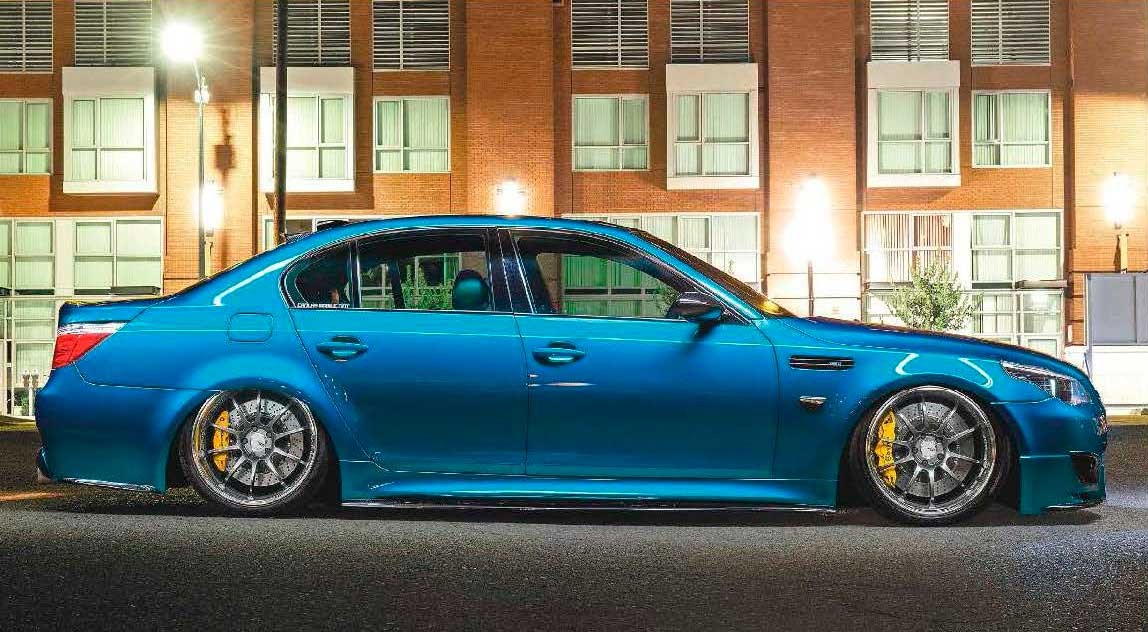