The Audi 100, launched in 1968, was something of an unexpected success. Debuting as a four-door saloon, and quickly followed by a two-door version, it provided a luxurious step up for drivers who’d started out in Beetles, and the Coupe S iteration that arrived in 1970 saw the launch-spec 1.8 motor bored out to 1.9-litres to offer a heady 113bhp. Demand was so strong for the 100 range that the Ingolstadt production line simply couldn’t cope, and Volkswagen had to knock up a separate line for them at Wolfsburg – which, interestingly, means that the Audi 100 was the first water-cooled model to be built in the VAG heartland. However, as popular as the C1-generation Audi 100 (which ran until 1976) was in period, it’s fair to say that survivors are pretty thin on the ground these days. 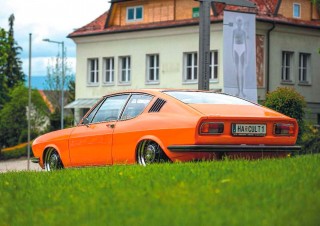 And this is especially true of the Coupe S – out of a total production run of 830,000 or so 100s, just 31,000-ish were sold in slinky fastback form, and the number of remaining roadworthy examples could probably all be collected together in an average-sized barn. Nevertheless, they do occasionally pop up on the market, and when Kevin Spannberger spied this ’1976 model poking its head into the classifieds, he just had to snap it up.

This was in fact a pretty bold move for our hero, as his previous motoring adventures had always concerned cars which were, shall we say, a little more solid. “I’ve always been into cars, ever since I was a child,” he says, “and right from the very start every car I’ve owned has been from the VAG stable. My previous projects included a Mk5 VW Golf GTI and a C5 Audi RS6, so as you can see I preferred ‘strong’ cars!”

So the acquisition of the 100 Coupe S was a real step into the unknown; Kevin had had projects before, but nothing that involved a full resto, nothing quite this in-depth. But fate has her whims, and it’s gratifying to note that the car found Kevin rather than the other way around: “It came into my possession almost by accident,” he recalls. “I spotted it out of the corner of my eye while I was looking at other things, but after a quick double-take I went in for a closer look and fell in love with the shape. I didn’t even think about the logic of it, I just knew I had to have it.” And so, he just had to find a way to make it his. Out of nowhere, all of a sudden, the idea of owning a Coupe S was as vital as oxygen. Now, there’s something that really needs bearing in mind when buying a car of this age, should you perhaps be considering taking on such a project: 1976 was quite a long time ago. Not in the grand cosmic scheme of things, sure, but when it comes to decaying metal and ageing plastics and seizing mechanicals… every day is a fresh corrosion and, much like you don’t notice such things on a day-to-day basis with your own skin and hair and whatnot, when you view it on a longer timescale the degradation is inevitable. It didn’t help that this 44-year-old car had spent the latter half of its life thus far sitting unused, gradually returning itself to the elements from whence it came. The crux of the matter here is that when Kevin bought the car, it wasn’t simply a case of jumping in, turning the key and cruising to a show – he had a little bit of work to do!

“For me, the 100 Coupe S is the most beautiful Audi ever”

Nevertheless, this is not a man who mucks about with such matters; he knew what he wanted to achieve and he got stuck in. One thing which proved particularly helpful (and was a major factor in buying the car in the first place) was that it was mercifully complete – a runner with a full interior, so there was no need to search the world for obscure trim pieces and hard-to-find accoutrements. Even so, it was no simple task, and it took a full 350 hours of hard graft to repair and perfect the shell, cutting out all the rust, replacing the damaged panels with fresh new ones, getting everything aligned and finishing the whole thing in that vivid jaffa paint. This last part was taken care of by refinishing supremo Philipp Tscholl; once the body was finessed, it was delivered to him to save as much of the original orange paint as possible and colour-match the new bits in a seamless fashion – the result is utterly flawless, stunning, and far more involved than simply blowing the whole shell over in a new coat. The originality that remains tells an endearing tale. 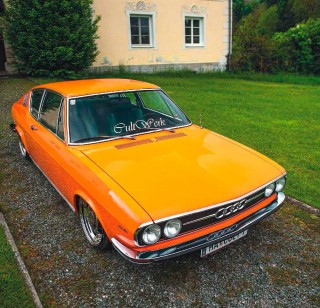 Incredibly the entire resto took under a year to complete, which is attributable to Kevin’s clarity of vision. “Right from the start I had an image in my mind of how it would turn out… and it’s actually ended up even better than in my wildest imagination!” he beams. The fulfilment of this vision took superhuman effort too, because Kevin is a details man – the project would have been finished even quicker, but he’s obsessive about quality and was adamant that everything be perfect, even the bits that nobody would see. Because if there was something sub-par hidden from view, he’d know about it and it’d always be niggling at him. As such, when it came to building up the car from a bare shell and a big pile of bits, every single piece of the car was either cleaned to a mirror shine or simply replaced with a new part. It turned out that, despite the car being bought complete and not necessitating that aforementioned worldwide hunt for parts, he kinda fancied doing it anyway. “This was the hardest part of the project,” Kevin laughs. “Finding the correct bits for these cars isn’t easy, sometimes tracking them down feels like a miracle. It’s something that only specialists and experts can help you with, you’re not going to find these things on eBay.”

Naturally, as you’ve no doubt deduced from the badass stance of this 100, we’re not only talking about a straight resto of a classic car here. This isn’t Classics Monthly. And there were two key elements that Kevin had in mind in order to amp up the awesomeness of this flawlessly crafted specimen: air, and wheels.

“I knew from the start that the car wouldn’t be staying on its standard wheels, although I wanted whatever replaced them to be in-keeping with the character of the Coupe,” he explains. “So the plan was simple: take the original 14” steels and turn them into something more special! I bought a second set of similar wheels and began reworking them myself into custom 3-piece split-rims.” The results are incredible, measuring a meatier 17” in diameter with the polished lips surrounding the original centres and hubcaps – it’s a design masterstroke, and true testament to Kevin’s impressive skill set. What’s particularly pleasing is the patina of the caps, which provides a lovely contrast to the mintyfresh perfection of the paintwork it juxtaposes. Then it was a case of crafting a custom air-ride system, pieced together and modded to his own specs, to get the retro coupe airing out like a champ. It really is outstanding, and it’s particularly amusing to see how Kevin has to crouch right down to ground level to fill it with fuel when he airs out at a petrol station…

This, then, is a build of contrasts. It’s nothing like any car Kevin’s worked on before, and yet he knew from the moment he saw it that it was the one for him. It’s also not especially quick, and it’s certainly not something with a massive tuning aftermarket dedicated to it, but of course this just makes it all the more fun. The Audi 100 surprised the world when it arrived on the scene all those decades ago, and in 2020 it hasn’t lost any of its capacity for shock and awe.

Below: Have you seen a prettier looking 100 Coupe S? We doubt it. Below: 9×17-inch custom 3-piece splitrims with stock Audi centres and caps and polished lips are a work of art.

Top: Super-low and serioulsy retro. Kev’s 100 Coupe S is a stunning Creation. Below: We can see green vinyl interior making a comeback in 2020. Well maybe not.

Dream Audi: For me, the 100 Coupe S is the most beautiful Audi ever

Favourite modification on your car: The rims, because I built them myself

Hardest part of the build: The bodywork, it had holes everywhere!

The Coupe S was very much the niche model in the Audi 100 range, representing less than 4% of total sales, although an intriguing twist in the tale could have seen it developing into so much more. In 1973, Audi and Porsche’s respective engineering departments collaborated to explore the sporting potential of the model. Two prototypes were developed: codename V3 was stuffed with the V8 engine and rear axle from the forthcoming Porsche 928, boasting around 350bhp, while V4 had widened bodywork to accommodate all of the 928’s wider-track running gear. These were actually development mules for the 928, with V1 having been based on a Mercedes SL. Ah, but what could have been…