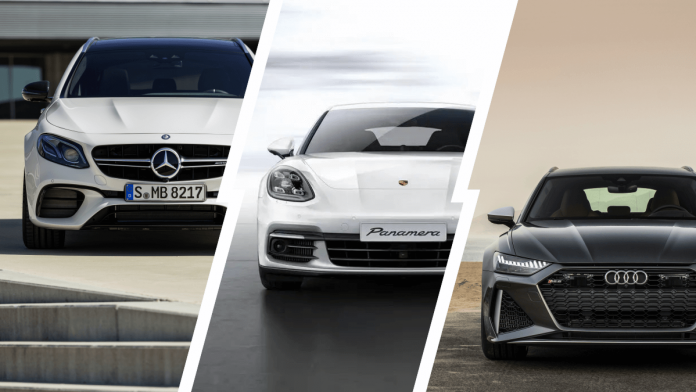 The new 2021 Toyota GR Supra 3.0 is the long-awaited legend reborn, and no, it is not a station wagon. It is a Japanese sports car powered by a 3.0-liter inline-6 turbocharged engine taken straight out of the BMW Z4, producing 382 hp and 368 lb-ft of torque. The 0-60 mph sprint takes just 3.8 seconds, and flat out, it would do 155 mph. Indeed, this is the fastest and the most powerful production Supra ever.

“What does that have to do with station wagons then?” you might ask. As a less popular market segment in America, station wagons are a rare sight. However, this makes it unique and attractive to that specific market.

Interestingly, some manufacturers disagreed that family-oriented wagons should be boring. In fact, they would engineer these wagons to perform and behave like a proper sports car while carrying 5 people inside with luggage and child seats. Believe it or not, some even made it faster than the already utterly quick GR Supra 3.0.

Thus, to put an end to your wonder, here is the top-three list of station wagon vehicles that are faster than the 2021 Toyota GR Supra 3.0.

The Audi RS6 Avant is one of the quickest and sportiest-looking station wagons out on sale today, and it has finally entered the States started this year. Based on the great Audi A6 Avant, the RS6 is longer, wider, lower, and much faster.

The engine is a strong turbocharged V8 that puts out enough power output to smoke the GR Supra off the line, especially with its Quattro AWD system providing an enormous amount of grip. However, this doesn’t mean you can’t have fun in the RS6. Just like in the GR Supra, you can also be a total hooligan in the RS6, thanks to its ability to send up to 85% of the power to the rear wheels when needed to allow a slight slip.

There is no way to mistake the RS6 for the normal A6 wagon with the aggressive-looking body kit. In fact, the RS6 only retains four parts from it—the front doors, roof, and tailgate, while the rest are almost entirely specific made for the RS6.

However, the practicality and functionality traits still carry. Specifically, with 101 cubic feet of passenger volume, it is the largest on this list. The interior quality is also very solid and sturdy, expected from an Audi.

Furthermore, with 190 mph top speed, the RS6 is the fastest station wagon on this list. Unfortunately, to unlock this figure from the standard 174 mph, customers need to pay $8,500-$9,000 extra for the Ceramic Brake package.

The AMG E63 S Wagon is Mercedes’ idea of a baller muscle car. Despite looking the most subtle and elegant, the E63 S is packed with an engine that roars the loudest and delivers the most brutal acceleration of the bunch, finishing 0-60 mph sprint in just 3.4 seconds.

With 603 hp under your right foot, the E63 S Wagon is the most powerful car on this list. As a result, not only is it much faster than the GR Supra—it even humiliates it.

Even so, Mercedes did not ignore the true purpose of a station wagon. The E63 S has the largest cargo space compared to the other two. Moreover, passenger space is decent, with enough space for five people. Besides carrying a Mercedes-Benz logo, the E63 S Wagon is undeniably luxurious.

However, although it may have the most foolproof and straightforward cockpit, some cheap materials are still found in areas that you would likely touch, and the overall interior build quality is not as solid as the other two wagons in this list. Rather disappointing for its six-figure price.

When you put the heart and soul of the Porsche 911 sports car into a body of a station wagon, the result is the Panamera Sport Turismo. ‘Sport Turismo’ is Porsche’s given nickname for its wagon Panameras, and the 4S E-Hybrid trim is the party piece.

Although it is no slouch, the 4S E-Hybrid Sport Turismo still has the smallest engine and the least cylinder count of the bunch, producing a power output of 455 hp combined. Hence, it is the least powerful when compared to the RS6 and E63 S.

It is also the least spacious inside. Besides, by adopting the highest price tag, it may not be the best value for money either.

However, the 4S E-Hybrid excels in other areas. For instance, the E-Hybrid system delivers an almost instant acceleration torque, and it is made so tough that the launch control system can be activated multiple times without having to rest.

It also arguably has the cleanest-looking interior, and the high-quality materials create a premium feel in the cabin. Moreover, with an expected 51 MPGe combined route, it is exceptionally economical. Its 21.1-gallon of fuel tank could get you to over 1,000 miles of range with careful driving.

Despite having a price tag that closely matches the other two wagons on the list, the 4S E-Hybrid Sport Turismo is still not the fastest wagon Panamera. The Panamera Turbo S E-Hybrid Sport Turismo is the top-of-the-range wagon Panamera powered by a twin-turbocharged V8 and two electric motors, producing 690 hp and 641 lb-ft combined. This spec would smoke the other two with a 0-60 mph time in 3.0 seconds. Sadly, its price starts from an eye-watering $191,700.

Nonetheless, the Panamera Sport Turismo is almost like a class on its own. It over-delivers in most aspects expected from a station wagon in terms of tech and poshness. If you are a Porschephile looking for a practical allrounder, this is the perfect car for you.

When you have the extra budget, these station wagons prove that you don’t have to sacrifice practicality for that sports car thrill. You might as well go faster than most sports cars you can buy in the market right now.

All three of them are an exceptionally great allrounder, and you can’t go wrong with any of them. The Audi RS6 is the most considerable if you are looking for a wagon with the sportiest vibe. It has the most aggressive look of the bunch, is packed with a strong engine, and has the largest passenger space.

The Porsche Panamera 4S E-Hybrid Sport Turismo is also a very compelling option if you are looking for maximum satisfaction in elegance, poshness, great driving experience, and outstanding fuel economy.

However, if it were our money, we would spend it on the Mercedes-AMG E63 S Wagon. Not only it has the most charismatic engine, but also the largest cargo space. It looks subtle, but at the same time, it is a total sleeper. It would keep up with most supercars on the road while being more practical than a family sedan, and our praises don’t get higher than that.