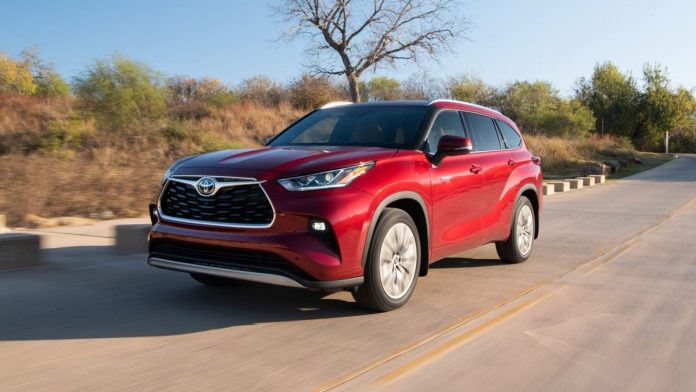 So. What can be so interesting about this people’s carrier? Well, the fact that it’s going across the ocean for the first time has to have some story behind it? In a year when Mitsubishi is counting its last days on the European market, we have Toyota going the other way round, bringing, for the first time on the old continent, the three-row Highlander Hybrid. Is the 4th generation the most sensible choice over the competition? Let’s try to find out.

What’s Going on on the Outside?

It’s now an old story that Toyota has reinvented itself. Since those sharp body lines on C-HR, Toyota isn’t the same anymore. The bar for the company is now way higher. And that’s a good thing. You see, no one says that the design has to be compromised by the functionality, and in this case, Toyota followed their proven formula. The front is neat and tidy and looks almost angry with a hood covering the front headlights.

A high-positioned hood guarantees good visibility, as you can see the front end that cuts down quite steep. The front grill is in an isosceles trapezoid form that continues in a fish-mouth-looking lower lip on the front fender (V6 XSE performance has a more aggressive facia). A high waistline continues on the side of the car and gives you the much-needed sense of safety.

The “no-more-boring-cars” design continues on the lower end of the front door with nice molds that follow on the rear doors, thus hugging the rear over fenders. Meanwhile, the rear lights resemble the posh cousins’ lights of Lexus NX. Looking from the side, the front A pillar in a black gloss finish gives a more dynamic look and maybe hints to Bi-tone versions in the future, similar to the RAV4; who knows?

The whole body sits nicely on a set of 18” or with a higher version on 20” alloy wheels. A part of the standard colors like black, red, etc., there a couple of metal-looking greyish colors on offer that can enhance those edge lines quite nicely.

In an Era of EVs, a Non-Plug-In Hybrid?

These days, EVs are the big thing, but I haven’t seen any sign on petrol stations that says “out of gas” yet! Yeah, someday for sure. But not yet. So why not only gas engine without those funny electric bits? You can buy that as well, but you’ll miss all the fun. This 4 pot 2.5L engine comes from the 4th generation of Toyota Hybrid engines. The full name is Toyota Dynamic Force engine, and that’s not an overstatement. It’s all aluminum and has little in common with the previous mill. 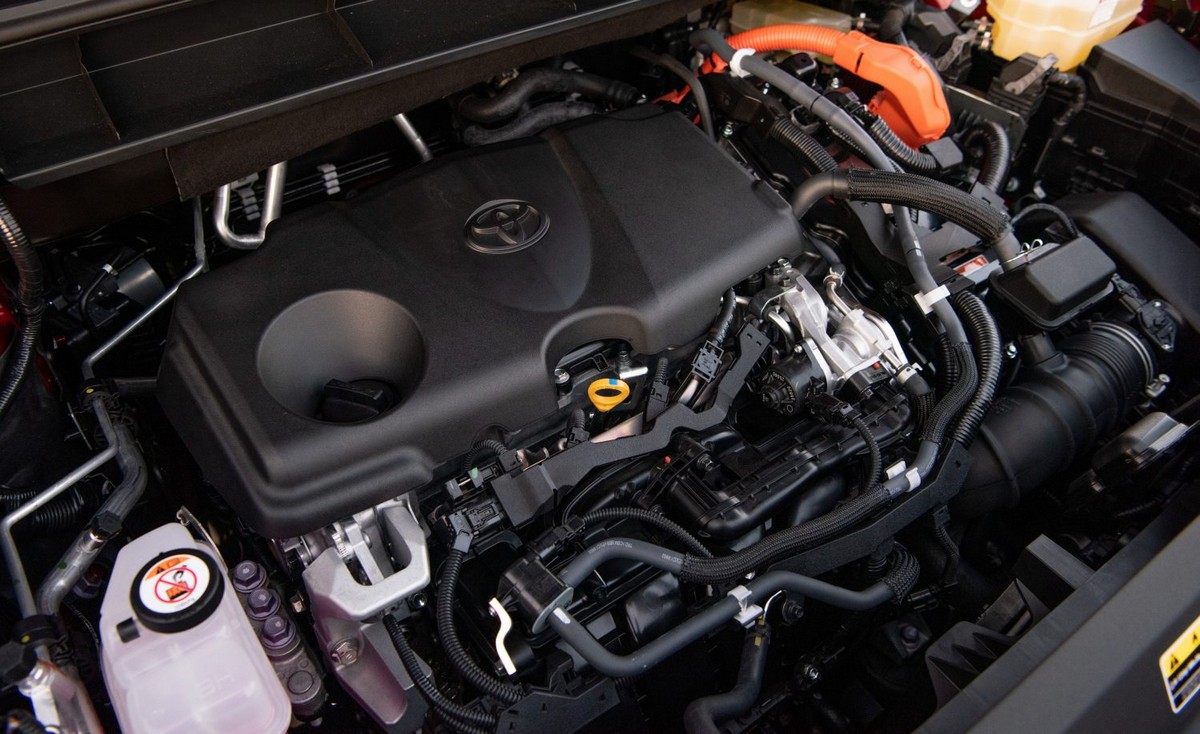 Coupled with the new e-CVT transmission, it delivers seamless acceleration, with minimized “rubber” effect, this time. Hence, it can finally let you feel all those 243 combined horses.

Moreover, the Highlander Hybrid has a rear electric motor that drives the rear wheels making it AWD on demand. Without any mechanical shafts, it reduces the power loss delivery, returns better fuel consumption, and it’s cheaper for maintenance as well.

Everyone Has its Own Micro-World in There!

A lot of room and enough cup holders for everyone; that’s expected from a Highlander, right? But the interesting thing is that it’s built specifically for 3 rows of seats and not a 2-row model fitted with an extra row. You see, some vehicles are designed as 5 seaters, but somewhere on the way, they become 7 seaters. Not this one. The Highlander Hybrid knows what it is and what is its purpose in this world.

Front passengers have a lot of room thanks to adjustable and comfy seats. There is also gigantic storage in the front seat armrest that can accommodate a (wo)men’s purse.

The instrument panel helps additionally with the vertical position, giving a lot of legroom as well. There is a lot of space for whatever doesn’t fit in there too, with an antislip rubber mat that helps stuff stay where you left them.

In the second row, depending on the configurations, you can have 2 or 3 seats. However, the middle seat is a bit stiff and not suited for extended travel as it’s not independent but part of the right-hand seat instead.

The third row can have a bit more breathing space by sliding the 2nd row by 7 inches forward. The angle of the backrests is also adjustable. As usual with these types of cars, you’ll have to be a kid or quite fit to enter the 3rd row.

Good Quality Throughout the Cabin

The used materials have an almost premium feel, and quality with only the lower parts of seats and door trims made of rigid plastic. You won’t touch them anyway unless on purpose.

I like the climate and main multimedia knobs and button controls as well. I mean, we all know that trend dictates touchscreens, but when is it enough? It’s about safety as well, not just the looks. It’s so intuitive to reach and adjust the A/C without any distraction.

Graphics on the displays could be more up-to-date, and it’s simply amazing how a company leading in technology can’t (or won’t) change the one (simple/cheap) thing that has a lot of visual effects and attracts buyers. But, hey, Toyota was always weird in some ways.

What Does it Do for Your Safety?

Pretty much every Toyota available on the market incorporates the 2nd generation of Toyota Safety Sense.

That means that it will follow the lanes and keep you safe even if you are a bit distracted. If you even miss some speed limit signs on the way, the incorporated camera will detect it and show it on the dash as well. The radar cruise control will get in hand while following another vehicle as it’s smart enough to adjust the speed accordingly and even slows down to a complete stop. That radar is elegantly hidden behind the Toyota emblem and can even detect pedestrians and bikes running in front of the car. 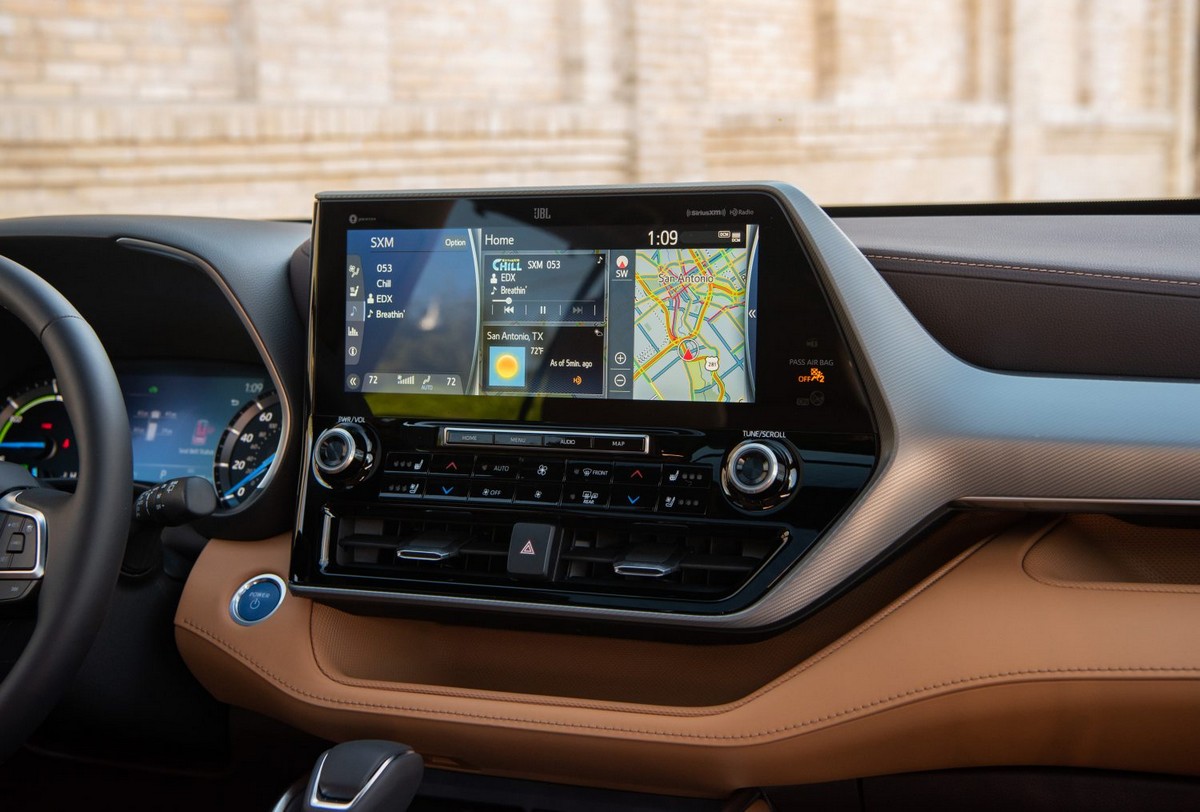 You won’t have to think about switching on and off those high beams as the TSS angel does it by itself.

That is active safety.

Passive safety consists of 8 airbags for your peace of mind. Another thing that got Highlander top ratings from the IIHS and NHTSA is the robust new platform called GA-K. It’s a version of TNGA adapted for this purpose, and it’s designed to make sure that the vehicle while drives safely and absorb any potential damage if needed. It’s made with extensive use of high-strength steel and, on the plus side, gives excellent feedback from the road.

Does it Run as it Looks?

It runs better than you’ll expect. This powertrain has decent horsepower but to calculate the maximum torque to a hybrid is a different thing. You can’t find a piece of information regarding combined torque delivery, but it’s enough for 3500 lb of towing capacity. And for this kind of vehicle, that is all you need to know.

Toyota Highlander Hybrid accelerates from 0-60mph in sub 8 seconds. It doesn’t sound swift, but just to put it into perspective, a vehicle that weighs 4500 lb and can carry the whole Profesor Sherman Klumps family can accelerate better than mk1 Golf GTi! It is also as fuel-efficient as the ol’ german hatchback with 35 mpg. That’s more than enough for me. On the plus side, you won’t need to organize your road trip with power stations on your mind as it’s a self-charging hybrid.

How Much Does it Cost?

Should You Buy it?

If you like to travel with your big family and don’t want to make too many gas stops on the way, this is the right choice. Toyota Highlander Hybrid drives very comfortably and with minimum noise, making it a perfect companion for longer travels. Safety is the best on offer at the moment. So yes, I would plan my next road trip with a Highlander Hybrid on my mind.