In the car modifying sphere, some people are more visible than others. This is due in part to their own feelings about privacy or self-promotion, but also owes a lot to the snap-ability of their cars and, yes, their tribe mentality. Today’s modifiers hunt in packs, their squad goals clearly set out on Instagram for all to see, each troop galvanised by a hashtag. #TeamVossen, for example – well, you can guess what that’s all about. Boys and girls who proudly run Vossen wheels. And within that circlefondling enclave, you’ll find ardent flagwaver Felix Kauer. 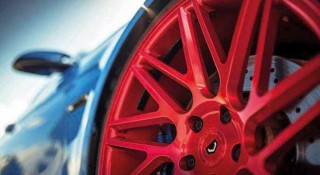 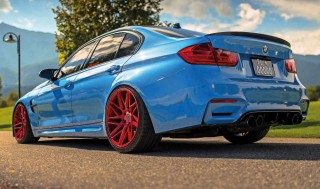 “It’s a kind of self-expression,” says Felix, gazing fondly at the brutal M3 that’s ticking and pinging beside us after a spirited run down some challenging, twisty roads. “Some cars are more or less perfect right from the factory, while others… well, with others you can be like ‘OK, if it had this or had that then it’d be perfect’. That’s why I modify cars. I’m building my dream car each time. The uniqueness is baked right in.”

This typifies a common approach to BMW’s iconic and aspirational M3. Ever since the E30 emerged kicking and screaming from its homologation birth, enthusiasts have been drawn to these cars’ ineffable sense of purpose; some enjoy the factory-specced purity, others see them as a blank canvas for insane horsepower or feverish weight-saving and track mods, but most seek simply to augment, to enhance. To take an excellent base, and just polish off one or two of the corners. Anathema to some, but wholly necessary to others.

This sparkling Yas Marina F80 isn’t actually Felix’s first foray into the shiny wonders of #TeamVossen. It all began with a rather different BMW – an F11 530d. Undeniably a cool car, but there’s a world of difference between a diesel 5 Series and an M3. You can see why he made the switch. “It’s a 2015-model M3,” he explains. “It was pretty new when I got it, it only had 7000km on the clock. The reason for choosing it as a base car for this project? 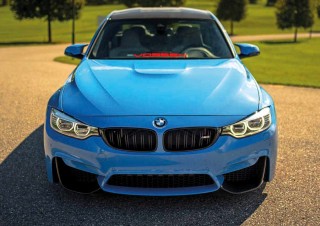 Well, the M3 has always been a dream car for me, it’s just as simple as that. I did a bit of searching online and found this car for sale at a dealer in Nuremberg, Bavaria, so I called them and said ‘I’ll buy it’!”

So, with the gloriously Smurf-like hardcore four-door safely ensconced within the Kauer garage, it was time to draw up a battle plan. And it turned out to be a pretty simple one, to be fair. “I wanted to change the rims and the suspension at first, that’s it,” he shrugs. Fair enough.

That does dovetail rather neatly with what we were getting at earlier – for some, the M3 is untouchable, but Felix is among the camp who view it as almost perfect. Almost, but not quite. And his motivation for this, his inspiration? Were there any Hot Wheels F80s out there flicking his switch? “No, there was no car I wanted to imitate or emulate,” he says. “It was all just my imagination.”

Now, the F80 M3 is a phenomenally accomplished piece of kit in stock form, that goes without saying. You’d have endless fun with an unmodified car and possibly may never wish for more – when you’re looking down the barrel of 430-odd horsepower, the 0-62mph dash despatched in four seconds plus change and all manner of other trickery, it delivers on a lot of promises. And Felix certainly didn’t want to cock up that formula – coming from the 530d, this had sent all of his expectation curves rocketing skyward. 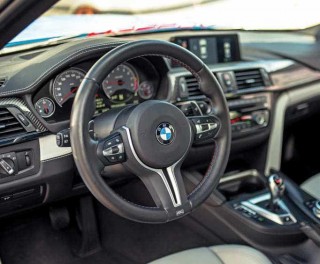 But, as is his way, that’s not to say he didn’t want to massage it a little… so you’ll now spot a set of Akrapovic tails poking out of that pert little rump. The genius of the Akrapovic Evolution system is that it provides three separate and distinct benefits: first off, it gives you more power – about 17hp more. Secondly, you also get more torque – call it 13lb.ft. And finally, being niftily crafted from titanium, you get a handy 7kg weight saving over stock. Oh yeah, and there is one other benefit – it makes the M3 sound astonishing. Like a swarm of infuriated bees trapped in an oil drum, all simultaneously taking off. “It’s quite good to drive,” he ponders.

“Not as sharp as the E30, but still…” Yes, we sense he’s being a little mischievous here. This precision-honed speed missile is plenty sharp, thanks to what he’s got going on under the arches. Sure, BMW’s M Division may have pulled countless allnighters worrying about how well their new baby would handle, and probably all got signed off for stress as they agonised over spring rates, but that’s none of Felix’s concern. He’s junked all of their endeavours in favour of a KW Variant 3 coilover setup, and the roadholding it’s bestowed upon the chassis really is something to marvel at. The fact that it’s hunkered down the body over those mighty wheels isn’t a thing to be overlooked either.

Ah yes, so we arrive at the wheels. You’ll probably have spotted that they’re quite big. What you’re looking at, in fact, is twenty firm inches of forged Vossen meat – VPS-314Ts, to be specific – boasting a robust 9” of girth apiece across the front axle and a perception-troubling 10.5” out back. And if you’re making that kind of a statement, you wouldn’t just settle for a mundane silver finish, would you? What would be the point of that? 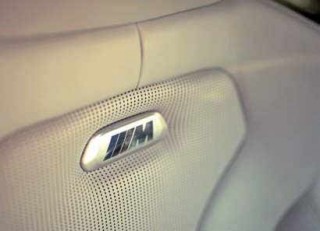 “The wheels are pretty large, we didn’t know if they were going to fit,” Felix laughs, artfully pretending that he hadn’t had it all measured up by the micron beforehand. “But it’s worked out perfect, and I love the way they look against the Yas Marina blue paint.” He’s not alone in this opinion either; as you might imagine, the reactions have been pretty positive.

“Yeah, one or two people have taken photographs,” he smirks. “And for some reason, one person really wanted an autograph!” The wheels aren’t the only exterior additions, though the others are a little more subtle compared with the bold finish on the Vossens. While The F80 M3 is an aggressive machine, there are plenty of options available if you’re looking to give it a bit more presence and a touch of individuality, as Felix did, which is why he’s hit the BMW M Performance catalogue and treated his M3 to a few carbon goodies from within. Up front you’ll find a pair of carbon flaps, that is to say the lips either side of the snarling central maw of the front bumper, and to balance these the rear has been fitted with a carbon boot lip spoiler and a subtle but very sexy carbon diffuser, which really finishes off the rear end a treat.

What’s next, then? Have these subtle but well-chosen mods opened the floodgates to future lunacy, or is this fella now happy with his lot? “Well,” he considers, rubbing his chin thoughtfully. “I do also drive an RS6 Performance, although I’m keeping that original. I think the next project’s going to be a Ferrari 458 Italia on air suspension.” Blimey. Where do these youngsters get all their disposable income, eh? 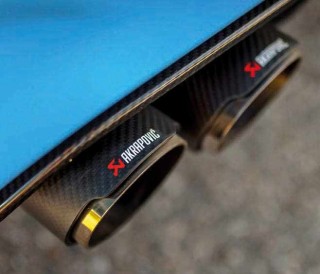 Felix sniggers at this age-based snidery. At 26-years-old, he’s hardly a youngling in the game. “You’re never too old to modify,” he counters, “although, yes, I do have to check with my girlfriend sometimes that it’s OK…” Understandable, of course. Wise counsel to guide the hand on the tiller of #TeamVossen 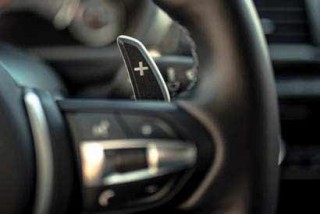