There’s nothing that gets our blood flowing quite like a big power E30. Not just because it’s an E30, which everyone loves, and it has lots of power, which everyone also loves, but because it’s taking such an unassuming car and absolutely transforming it, taking it so far beyond its original form and being able to face the challenges that comes with building something like that. Not only does it take skill to build a car like this, it takes skill to drive it, too; E30s can be a bit wayward and tail-happy anyway if you’re a bit overzealous with the throttle, so once you start getting some seriously big numbers into one, you’re going to have quite a wild machine on your hands. It’s this raw, back-to- basics interaction between driver and machine that’s just one of the reasons why so many people are more than happy to say no to being sensible and say yes to building a monster E30. 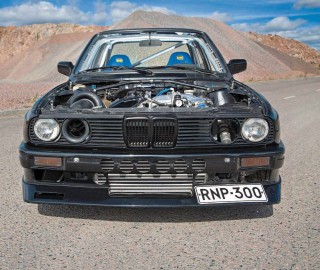 Perttu Sikanen is one such man and it will be no surprise at all to learn that he comes from Finland, because Nordic countries and crazy turbo BMWs go together like strawberries and cream, and the same applies to Perttu and BMWs. “I’ve liked them since 2001, back when I was a kid,” he tells us, “and my first car was an E30 316,” so he’s clearly a man with good taste and that taste is geared towards the classics. He clearly also likes a bargain, which is how he came to own the particular car we’re looking at today.

“I bought this E30 because of the price,” he grins, “it was so cheap, plus it had an LSD,” which was good, but there was one thing which was less good, and why it was so cheap… “The engine was broken,” says Perttu, but seeing as he was never going to keep this car stock that really wasn’t a problem. “I bought the car in 2005 and my plan was to just build the car faster and faster year by year,” and we’d say it’s mission accomplished because after 12 years of building it’s very fast indeed. You see, Perttu hasn’t spent the past decade and change building this car just for fun, he set out with the intention of taking it drag racing and competes in Finland’s Blacklist drag racing series with not just the only European car but also one of the fastest cars in the whole country… 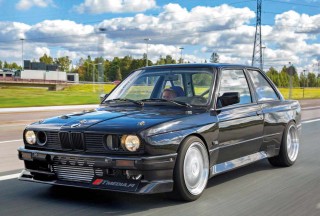 It’s impossible to look at a car like this without immediately being drawn to the engine and what an engine this is. With no engine to speak of when starting out on his epic E30 build, Perttu was free to choose anything he deemed fit for the task in hand; it also had to be something that could grow as the project grew over the years and his engine of choice was the M50B25. This sturdy straight-six loves a turbo and there’s a lot of scope for big power, making it the ideal candidate, and with some serious mods over the past 12 years it’s been transformed into an absolute beast. For starters, it’s no longer a B25 and has been stroked to 2.8-litres and fitted with CP Pistons and Eagle rods, an M52B28 crankshaft, ACL bearings, Enem 292° cams, chromoly valve plates, stiffer valve springs and an uprated cylinder head. This sets everything up nicely for the turbo, and Perttu has chosen a Holset Pro55 for this build, a mighty item rated to 1000hp and perfect for this build. It sits on an AIG Motorsport exhaust manifold with the downpipe leading to a 4” exhaust while on the other side of the engine is an eBay intake manifold. Naturally the fuelling has also been suitably upgraded to ensure that the engine gets enough of the good stuff, that being E85 in this case, and Perttu has fitted 1750cc Bosch injectors being fed by twin Bosch 044 pumps and a Bosch transfer pump. So just how much power does all this add up to? The answer is a Tarmac-trembling 823hp, backed up by a mighty 601lb ft of torque, produced at a heady 1.9 bar of boost. Perttu’s fastest pass to date is an astonishing 9.7 seconds at 148.5mph, which makes it as fast as a Bugatti Veyron Super Sport and faster than every other hypercar currently on sale, including the McLaren P1, LaFerrari and Porsche 918 Spyder, all of which would set you back over £1million each, so we reckon Perttu’s got himself a bit of a bargain here.

Of course, just building up a massively powerful engine, sticking it in an E30 and hoping for the best isn’t going to cut it and there’s plenty going on beneath the surface to ensure that all that power makes it to the Tarmac without destroying everything in its path in the process. Perttu has fitted the ZF Type-C five-speed gearbox from the E36 M3 and it’s been bolstered with a triple-plate Quartermaster clutch and Bling Factory flywheel while power is transferred to the rear wheels by a motley drivetrain crew made up of a modified E34 M5 cardan shaft, E34 M5 3.45:1 ratio diff and custom driveshafts. The chassis has also been suitably upgraded with D2 coilovers up front and Avo rear items, poly bushes front and rear, the rear control arm mounts have been raised by 3cm and Perttu has also added rear camber adjustment. While brakes aren’t so important out on the drag strip, this car does get driven on the road and that’s where you want to make sure you’re able to control 823 rampant horsepower which is why you’ll find four-pot Wilwood calipers up front with 310mm discs while at the back sit 300mm discs with E34 calipers. The wheels are 17” Keskin KT1s, eights up front and tens at the back, but for drag racing these are replaced with a pair of 10×15” wheels wrapped in Hoosier 10x26x15 slicks for maximum traction.

These are actually the reason for the car’s outlandish outward appearance as Perttu explains; “I wanted to run fat slicks, so I had to make the car wider,” he says and that’s exactly what he did. The car’s been fi tted with fi breglass E30 M3-style front and rear arches but the rears have been widened further still, adding an additional 5cm per side and giving this E30 some incredible road presence, though obviously being able to squeeze some seriously wide rubber under the rear arches is what this endeavour was all about. The removable bonnet is also made from fi breglass, the side windows are all polycarbonate, the front bumper wears an aggressive front lip and has been drilled to provide the huge front-mount intercooler with maximum airflow and there’s a side-exit exhaust complete with heat shield. While everything you see has been done for a reason and with a purpose behind it, the fact that it all also happens to give this E30 an incredible sense of menace and huge road presence is most definitely a good thing.

As for the interior, with this being an out-and-out drag car, you can forget about creature comforts, it’s all about stripping weight, removing every nonessential component in order to make the car as light as possible so it can go down the drag strip as quickly as possible but that doesn’t mean it can’t look good, though. Everything is very neat and tidy in here, there’s no mess, no exposed wires, it’s been executed with real care and precision. At the back there’s an upholstered rear seat-delete panel, the door cards and side panels are made from aluminium, there’s a full roll-cage, a pair of OMP single-piece bucket seats with Williams six-point harnesses so that Perttu can scare his friends, and a Luisi two-spoke steering wheel. While you would usually expect to see a big power, turbo BMW’s interior absolutely covered in gauges, Perttu has kept things nice and simple here, with just the essentials. There’s a boost gauge mounted in the centre console but there are two oil pressure gauges, one next to the boost gauge and one right on the steering column, allowing Perttu to keep an eye on the car’s vital fluids, and there’s also a shift light, essential when you’re hammering down the quarter mile faster than the fastest cars money can buy.

To call Perttu’s E30 epic would be an understatement. He’s taken a broken bargain of an E30 and turned it into a full-on, no compromise drag beast and it’s one hell of a machine. We feature a lot of turbocharged BMWs and they’re all awesome but very few of them have been built with a purpose and that’s what sets this car apart. It was built to go down the quarter mile as fast as it possibly can, that’s what it does and it’s very good at it. Perttu’s not done, though, he wants to go even faster… “I want to break the Finnish quarter mile record, which is 9.5 seconds at 155mph,” he says, and based on what this E30 is capable of now and how capable Perttu is at extracting vast amounts of power from his E30 and driving it extremely quickly, it’s only going to be a matter of time.

“So just how much power does all this add up to? The answer is a Tarmac-trembling 823hp, backed up by a mighty 601lb ft of torque, produced at a heady 1.9 bar of boost”

“While brakes aren’t so important out on the drag strip, this car does get driven on the road and that’s where you want to make sure you’re able to control 823 rampant horsepower” 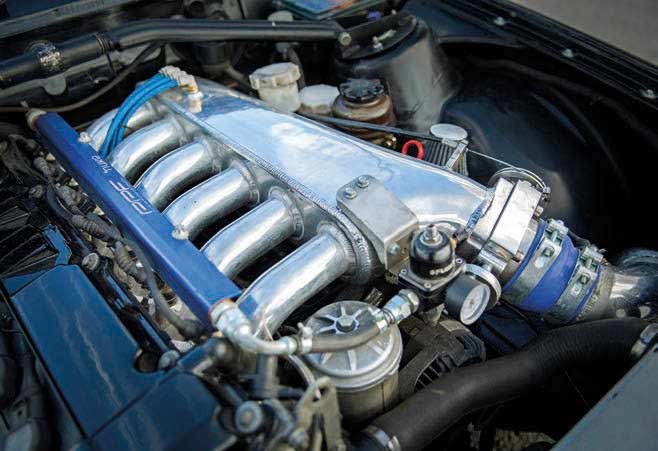 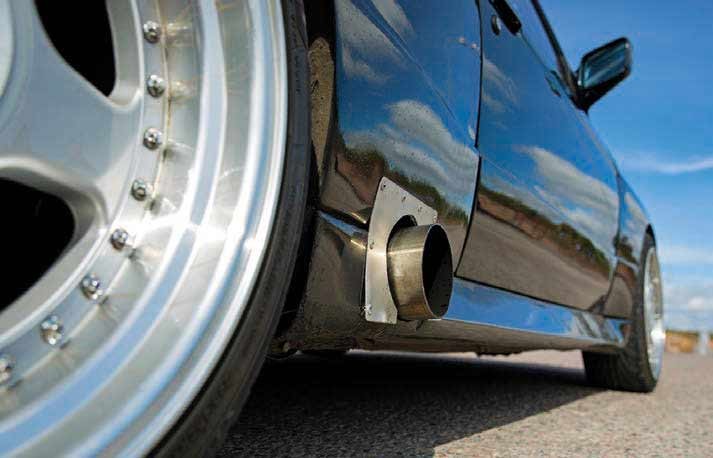 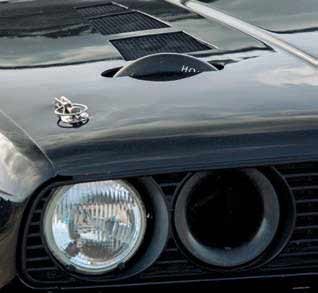 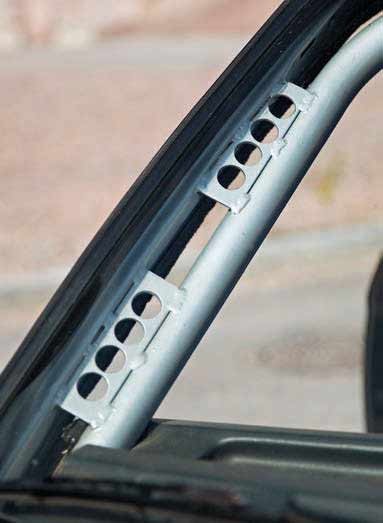 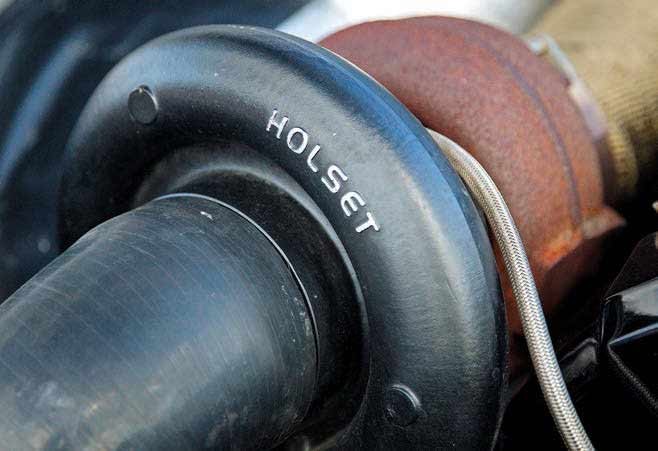 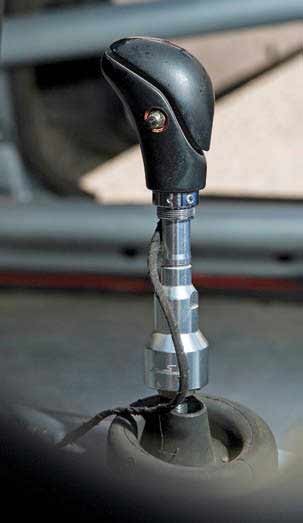 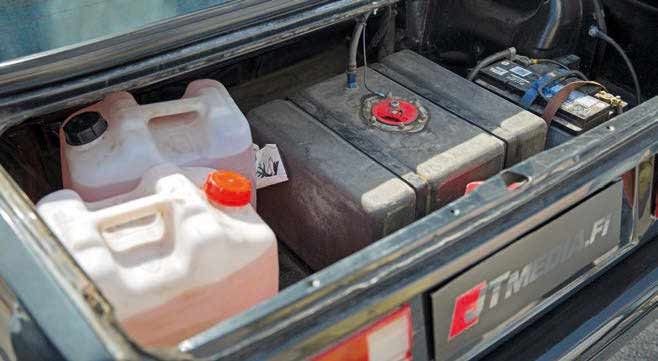 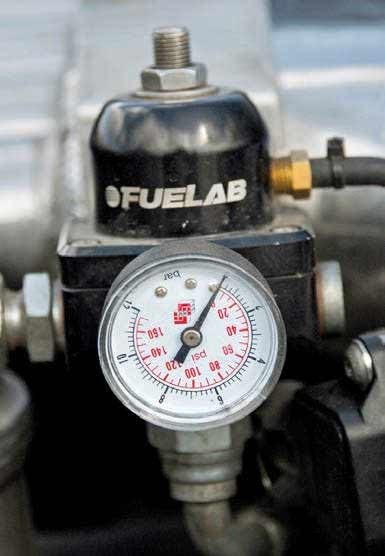 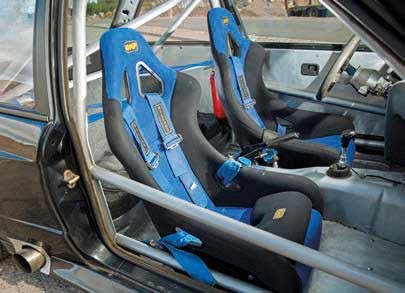 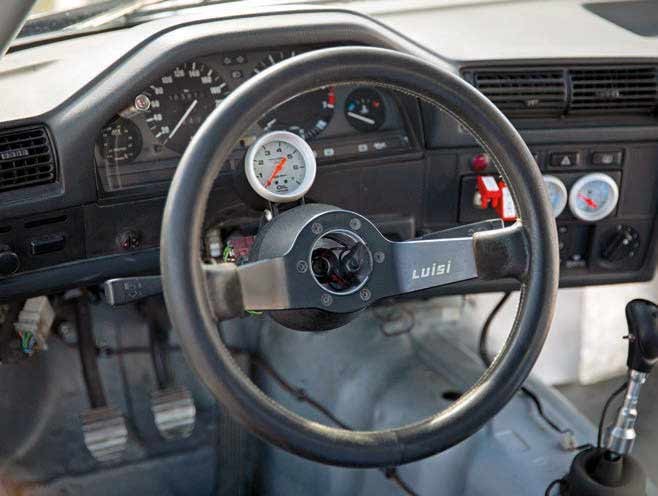 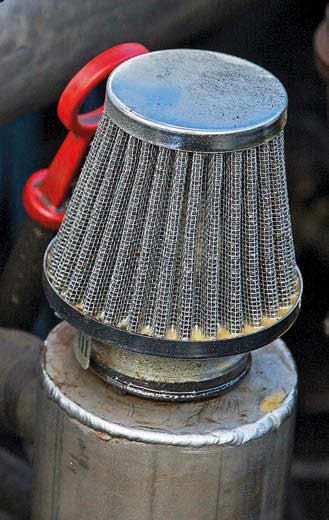 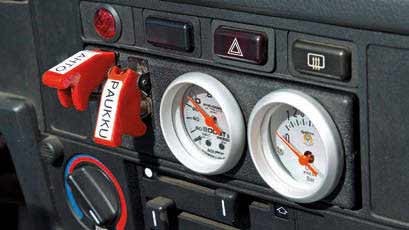