As the cliché goes, fast estates are for people who like to haul gear and haul arse. But what if you like to look good while you do both? Well, some would argue any reasonably sporty longroof will achieve that, but for those who really want to stand out, you have to go to extra lengths. This is exactly the situation Kiyoto Furuyama found himself in back in August 2010. A hardcore wagon lover from his early days thanks to his love of surfing and golf (previous cars included a GX70 Mark II wagon and an E34 525i Touring), Furuyama-san wanted to get back into an E34, but step things up a notch. Starting with an automatic 540i this time, he wanted to make it much more like the super-rare M5 Touring, but with a shakotan-inspired twist, and after enjoying the car in stock form for a year or so, got to work sourcing parts.

Furuyama-san then turned to the wheels and suspension, fitting a set of M Parallels, Spoon Rigid Collars, Racing Dynamics anti-roll bars and cheap Taiwanese weldin coilovers (pretty much the only option at the time in Japan) to spice things up. However, he never really liked the wheels and suspension, so set about investigating potential upgrades. Unfortunately, it turned out locally-available suspension choices hadn’t really expanded since Furuyamasan fitted the original coilovers, so he was kind of stuck. And while many other wheel choices existed, none really fitted the aesthetic he was trying to create. 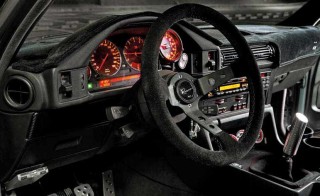 Thankfully, a chance encounter with the head of Scream, a tiny Japanese coilover manufacturer that generally only builds to order, solved both problems. Having befriended the owner, Furuyamasan told him he wanted a proper bolt-on solution that would also allow him to slam the car, and as you can see, he delivered. Fortuitously, Scream’s owner also knew the head of J-Wheels, another tiny company making custom parts in western Japan, and this opened the doors to the hoops you see here. According to Furuyama-san, J-Wheels is so small they have no website, no catalogue (although they have three basic designs to choose from), and you have to just tell them what you want for them to build you your wheels. Choosing a custom version of the MS01 five-spoke option, Furuyama-san was happy to see they turned out very close to what he had envisioned, and he gets the added privilege of knowing he’s the only person in Japan with that exact set.

Having sorted the car’s stance and braking, Furuyama-san added a Recaro SPG seat for himself to spice up the interior a touch, then turned to the more serious task of upgrading the drivetrain. From the very beginning, his plan to make the car more ‘M5-like’ included swapping the auto’ for a manual, but again, finding the right part turned out to be harder than he thought. “When I searched for manual gearboxes, most were overseas, and postage for such a heavy item would have been prohibitive,” he says, so he limited himself to combing through the very small number of local offerings, hoping to find one that matched his requirements. He didn’t but, luckily enough, in January 2013 an E34 M5 saloon that he actually followed the build page of came up at auction for a very reasonable price (“I could get the whole car for just the cost of a manual gearbox shipped from overseas”), and that allowed Furuyama-san to make the car much more than just ‘M5-like.’ Now he could actually swap the coveted late-model 3.8 engine and six-speed manual wholesale into his wagon and essentially get himself a stanced M5 Touring without having to pay the ludicrous prices good ones command these days. 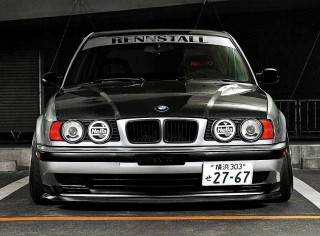 Unfortunately, as is often the case, the swap itself wasn’t easy. As befitted its auction price, the donor car had been well abused, and many little engine-related things, as well as a clutch, gearbox and diff overhaul, needed to be taken care of before the engine and drivetrain could be fitted safely into the Touring’s body.

Due to the difference in body length, workshop Elite Motors in Yokosuka, south of Yokohama, also had to fit a custom exhaust, and, just to ensure even better sound, power and reliability, also added a K&N pod filter and Okada Projects Plasma Direct ignition coils. Of course, all the remedial and custom work, plus the small, but important upgrades, added to the overall cost, but Furuyama-san says it’s been worth it. “It’s great fun to drive. It’s completely different [from the previous set-up]. In terms of pure speed, it’s probably not that much faster than the old engine, given that was a torquey V8, but the sound, and how the six revs out, is almost like a bike motor. I suppose you could call this car a very convenient motorbike,” he laughs. And Furuyama-san should know – he used to ride a modified CBX400 back in the day, too.

One side benefit of buying the particular M5 he did (aside from the LCI drivetrain) was getting the rare Car Factory Uejima carbon bonnet with it. “I actually chatted to the shop about getting one, but then this car came up for auction. So it was a complete coincidence”. As you can see, the glossy carbon number offsets the factory silver paint perfectly, as well as tying in with the other exterior changes Furuyamasan has made over the course of the build, such as the M Tech front bumper with blacked-out grilles, Schnitzer rear bumper, black M5-style mirrors, subtly stretched wheel arches and Hella high beam covers. 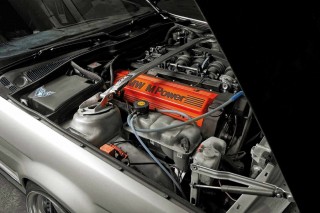 Finished off with the Rennstall windscreen banner, the silver and black theme looks stunning under the lights of the Yokohama car park location we used, the strong but subtle lines and curves of the classic E34 exterior working brilliantly with the sharp, angular building roofline.

Inside, Furuyama-san added more spice after the engine swap with an upgraded Recaro LX for his wife to sit in, a very solid-looking Rennstall shifter, Renown 100 Motorsport suede wheel (which comes standard with the M tricolour stitching), Mooneyes dash cover, Schnitzer hand brake lever, Schroth six-point harness for the driver’s seat (which he admits is just for show), a trio of Defi supplementary gauges and column-mounted tach. He also installed the entire M5 dash cluster to ensure, along with the ECU and necessary wiring changes, that the car works as intended. Everything behind the front seats is stock though, as the car still has to serve its practical purpose of hauling golf clubs, surfboards or shopping when needed.

So, having got the car to this stage, what does Furuyama-san have planned for the future? Well, for starters, by the time you read this, he may well have already swapped to a set of Hamann PG-1s, which he bought in Bali, of all places (his company happened to have an employees’ retreat there in January and they were up for sale online shortly before he left) and were being reconditioned and re-sized at time of writing. Because of the move to 11.5” rear barrels, he’s likely going to have to get the rear arches widened further, too. Given the engine has now done well over 100,000km, Furuyama-san also plans to overhaul it, then swap out the nearfactory induction system and fit a set of ITBs, complete with lovely velocity stacks. Rather interestingly, he says the idea for this mod came about after seeing Michael Hack’s E30 Touring in our June issue. Finally, there may well be a respray in black or gunmetal (“something dark”), and possibly an interior re-trim, but after that, Furuyama-san says he’ll be done. 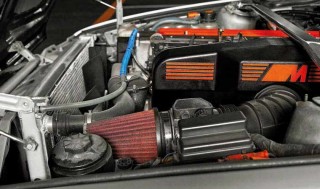 Irrespective, he plans on keeping the car for a long while, and just enjoying the mix of fun, practicality and award-winning style (the car took home trophies at both Stance Nation G Edition 2016 and Wekfest Japan 2017) he’s achieved by building this unique beast. Thanks to the Star-spec Direzzas he currently runs, even with the car’s stance-oriented camber, Furuyamasan gets enough grip to have fun on the Tokyo Bay area motorways, and shifting through the gears to rev out that glorious S38 would no doubt never get old. The fact he can do all that on his way to the beach or golf club, carrying his equipment without any hassle and not a care in the world, is surely the icing on a very delicious cake. 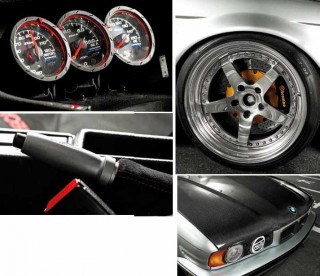 THANKS Thanks to Scream, J-Wheels, Miyaban Body Works, Roncraft and Elite Motors for all their assistance with this build 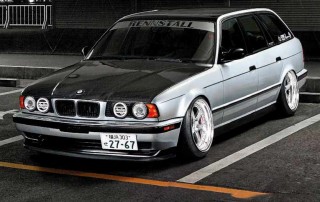 “Starting with an automatic 540i, Furuyama-san wanted to make it much more like the super-rare M5 Touring, but with a shakotan-inspired twist”

“Furuyama-san could actually swap the coveted late-model 3.8 engine and six-speed manual wholesale into his wagon and essentially get himself a stanced M5 Touring”