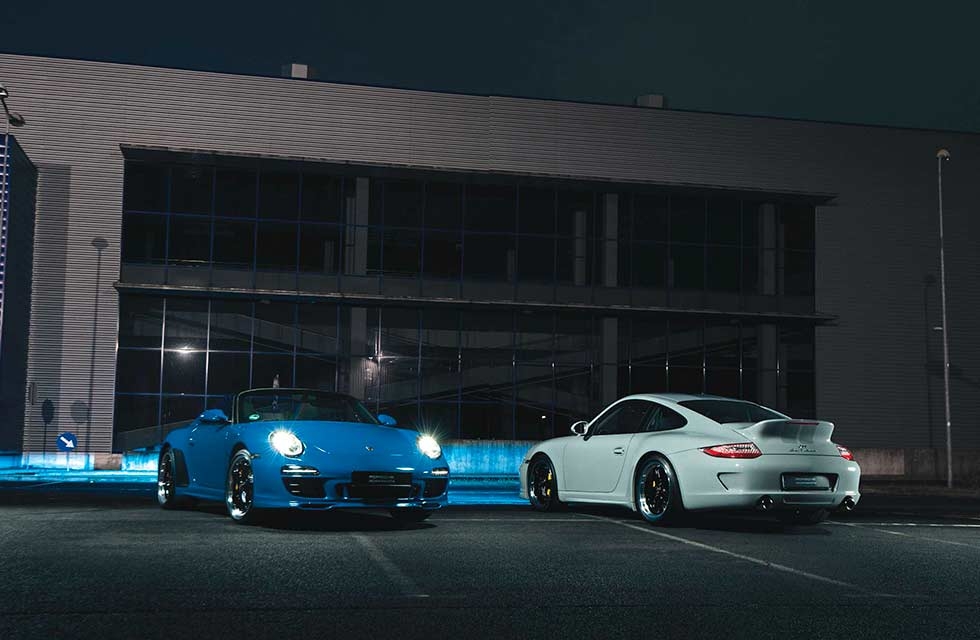 Where Exclusivity Began. As the new 991 Speedster is prepared for production, we revisit two 911s that shaped the modern Porsche Exclusive lineage – the 2009 Sport Classic and 2010 Speedster… Story: Matt Zuchowski. Photography: Maciej Kintop.

In 1955 Max Hoffmann, a well-known car supplier for the sybarites living on the American east coast, made a call to Zuffenhausen to ask for a cheaper and sportier version of the 356. In return, he received the first Porsche Speedster. His idea was brilliant in its simplicity; it took not much more than a raked windscreen and elimination of part of the equipment to create a more focused, distilled version of the Porsche formula. The 356A 1600 Speedster rose to such prominence that throughout the following decades its idea was repeated five times, in the form of 930, 964, 993, 996, 997, and now, 991 Speedster.

The 991 iteration of the famous body style will presumably be once again the most coveted 911 derivative of its time, the final act in the current generation’s production cycle. Before we get a taste of this special car though, we thought we’d reacquaint ourselves with its direct predecessor, the 997 Speedster, to determine what to expect from it. But to get the full picture, we need to dig a little deeper.

It was this car that displayed the power of Porsche Exclusive…

Arguably, the 911 that started the retrospective Porsche movement as we know it was the 997 Sport Classic of 2009. In the cynic’s eyes it wasn’t much more than a humble 997 Carrera S with a handful of bespoke details and a unique finish that pushed its price way beyond the flagship 911 Turbo – and beyond any rationale. But with its long-time-no-see double-bubble roof, ducktail spoiler and Fuchs wheels, this was a 911 for those in the know; indeed it was a special car. Porsche fans loved it and collectors yearned for it, they bought all 250 cars allocated for production before you could count that far. Now sellers value them at around £250k to £300k apiece, more than twice their original asking price (and roughly five times the price of 997 Turbo of the very same vintage).

The 911 Sport Classic played a pivotal role in the Porsche Exclusive department’s expansion. The skunkworks garage was set up in 1986 in response to the growing demand for individualisation that the previous Sonderwunsh (Special Wishes) programme, which had operated for nine years, simply couldn’t accommodate. Even if the Porsche Exclusive nameplate was yet to be widely recognised in 2009, the department already had several advanced and truly special 911s under its belt. Those included high-performance 964, 993 Turbo S, some little-known Turbo Cabriolets, and two Speedsters. Those were a rather unsuccessful 964 Speedster that failed to meet their 3,000 unit production estimate by selling in less than one thousand, and a little known 993 Speedster of which just two were built. With today’s individualisation mania, Porsche Exclusive is a heavily promoted sub brand with a global reach. It even gave its name to some of Porsche’s most, well, ‘exclusive’ models. In 2014 the Panamera Exclusive Series and in 2017 the 911 Turbo S Exclusive Series for example. But it’s much more than just a name. Even though the division operates within Porsche’s main headquarters in Zuffenhausen, it has its own dedicated team working in a separate facility using its own manufacturing methods.

Last year’s 911 Turbo S Exclusive Series can be regarded as a recent highlight for the workshop, this special model can also be viewed as a spiritual successor to the 911 Sport Classic. There’s clearly a pattern here. These limited edition models mark the end of any given 911’s reign – the 991 generation together and the 2019 Speedster being a case in point. Just like it, the pair of 997s in our photos ended the 997 era. Let’s remind ourselves how they did it.

I grasp the Speedster’s keys. As in the Sport Classic’s case, here the 3.8-litre flat-six has also benefited from a slight power hike, result being 402hp and 420lb ft. The fact that the forthcoming Speedster will still be naturally-aspirated is quite a statement, but in the time of its predecessor, the 911 line-up was still mostly turbo-free. The contemporary 3.0-litre turbo Carrera motor may impress with its flexibility and effectiveness, but surely it can’t match the aural drama of what I’m dealing with tonight? The 997’s engine wakes with a spine-tingling bark. Soon it settles into low revs, but the red tachometer needle clearly wants more as it dances happily on the analogue dashboard in search of the 7,250rpm redline.

To my surprise, the first thing that makes me excited is, objectively, the least special about this car. After all, its six-cylinder boxer engine doesn’t differ dramatically from the one that could be found in the common decade-old 911 S or GTS. Nonetheless, taken out of this context, it makes a glorious impact and complements this truly fine sportscar.

There’s still so much fun to be had from a smartly-specced, but still pretty basic, late-2000s 911, which, technology-wise, this Speedster effectively is. Fitted with voice control, PASM suspension, a seven-speed PDK gearbox, and PCCB brakes, this 2009 car comes remarkably close to current equipment standards. The active suspension makes a good first impression as it provides a supple ride while rolling slowly. As speed rises, it keeps the body in taut control as it should. Then there’s the steering, which with hydraulic assistance, is a gem. The electrical setup of the current 911 may be miraculously good but, at best, is just as good as this one.

Of course, there are also places where Porsche and its suppliers have made significant progress over the last decade. The pedal feel of the carbon ceramic brakes is one of the welcome improvements, while the dual-clutch auto ‘box possibly has made not even one, but two steps forward during last ten years. Not that much of this means anything today as the “No.000 of 356” plate displayed on this car suggests, it has assumed the role of (Porsche Museum) garage queen. If this car is meant to be admired, so be it.

After all, it does make quite a visual impact, doesn’t it? Mixing well-known 911 motifs with a distinctive two-humped tonneau, it really looks like a Porsche’ Speedster. Just like in 1955, it didn’t take much to achieve this effect. The windscreen got shortened by 77mm, but, unlike the previous Speedsters, this car’s windsreen rake remained the same as in the other 997s. The body is 40mm lower than a conventional Cabriolet, making it the flattest 911 of its generation. In combination with the 997 4S, extended arches (and the 964-style black decorative film mounted in front of the rear fenders) it also looks to be the widest.

For a complete sense of occasion, the Speedster’s creators borrowed lightweight aluminum door panels from the 911 Turbo and a front lip spoiler that debuted on the nose of 911 Sport Classic. They designed and constructed the folding roof and the double-bubble tonneau cover especially for this model, still, effectively forcing the side windows to take on a unique shape as well. In good old Speedster tradition, the owner has to do without rear seats or any aid in getting the roof above his or her head. The mechanism is operated by hand and one needs to get out of the car to unload it, but the procedure remains logical and ergonomic in a very German way. The solution serves its purpose even during heavy rain. A close examination of the 991 Speedster Concept reveals that the new car might feature a far more spartan solution, a lightweight cloth attached with eight Tenax fasteners. Before we see the production version of the car, the jury is still out on whether this is just a car designer’s fantasy or production reality.

After the main design work was done, it was Porsche Exclusive’s turn to make the Speedster even more desirable. The final result is a highly elegant combination of some distinctive black details and Pure Blue paint that was created especially for this model. Even if it hasn’t appeared on any other Porsche model to this day, even rarer (and thus more coveted) are the Speedsters finished in plain Carrera White, the other colour option that was available upon request.

The cabin boasts even more details that make this car something much more than just yet another 911 derivative. There are some unique and quite striking parts, like the aluminum handbrake lever with Speedster lettering, and the chequered flag motif embroidered in the seat centres. Even without these trinkets, the cabin would still be quite a special place to sit, Porsche Exclusive’s exceptional attention to fit and finish has managed to single-handedly elevate the final effect well beyond usual 997 fare. Virtually everything you touch here is leather, including not only door panels or dashboard, but air vent frames and seat bolsters.

Truth be told, the Sport Classic took this level of individualisation a step further, throwing into the mix such gems as leatherclad coat hooks. Possibly, it was this car that displayed the power of Porsche’s Exclusive department most explicitly during its nascent times, as it had nothing more than just some body and cabin details to play with in its quest to create a 911 that stands out. And stand out it did, ending up as possibly the hitherto most convincing reference to the 911s of yore. With its blatant ‘70s inspired bodywork details and cabin colours, this quirky limited edition 911 was a 997 like few others, if maybe not as appealing to the wider audience as the 991 Turbo S Exclusive Series that arrived eight years later.

The new 991 Speedster will likely be an improvement on this 997-based car on all fronts. For starters, it won’t be based on a Carrera S. Instead, Zuffenhausen engineers have decided to go big this time by basing the new creation on the GT3, effectively making the drop-top version of Porsche’s street-legal racecar we’ve longed to see. To complete such a feat, Porsche Exclusive has been aided by other two special divisions of the company; Porsche Design and Porsche Motorsport.

These three great offshoots have teamed-up so that the new Speedster may deliver the same USP it has always stood for: the purest, rawest, and the most back-to-basics 911 driving experience of its time.

These limited edition models mark the end of any given 911’s reign..