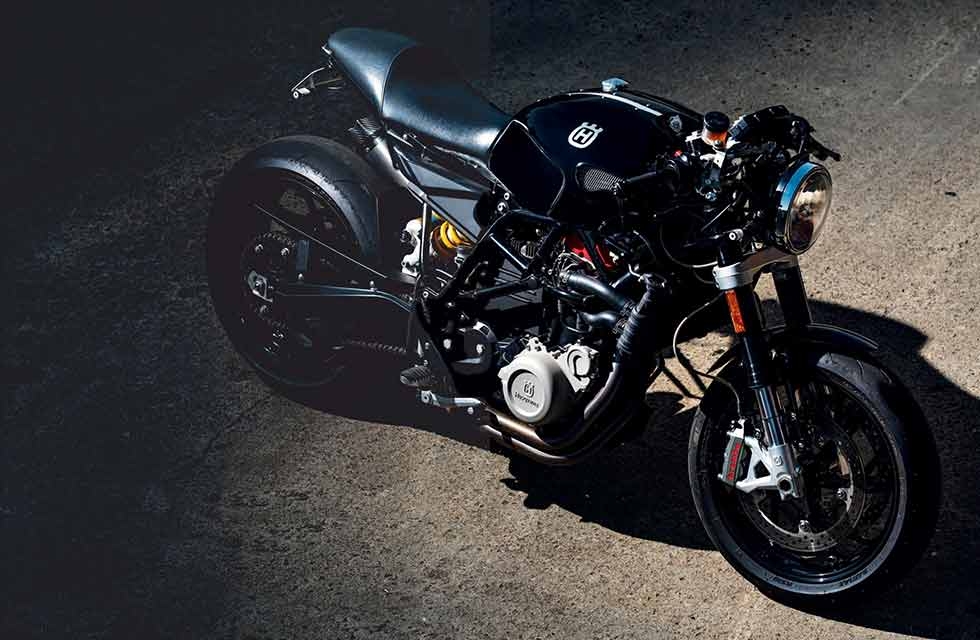 Melbourne’s Joshua LaPirow and Bikecraft’s Brad Wiseman transform the world’s biggest moto crosser into the most unique cafe racer in Australia. Nothing is more naked than a stripped Nuda!

Well, here’s another one you don’t see everyday, a cafe racer based on Husqvarna’s short-lived Nuda 900R. Eh? The what? The Nuda was Husqvarna’s first road bike in 50 years, developed when the company was briefly owned by BMW. The Supermotard-style street bike went on sale in 2012 powered by a highly modified F800 BMW twin to rave reviews, but was axed three minutes later when BMW sold the company to KTM in early 2013.

Longtime scratcher and clubman road racer Joshua LaPirow was one of the canny few to see it for the bargain it was and nabbed one before they were gone. “I had owned a Honda CBR600RR for around five years at the time and I wanted something which wasn’t a sportsbike, at least in the interim,” the 30-yearold investment consultant says. “The Nuda 900R was different from other Japanese bikes I owned, well made (it’s kind of a BMW after all) and relatively inexpensive for a Euro bike with monobloc Brembos and Öhlins suspension. It was by all accounts a good motorcycle to own and overall it didn’t break the bank. I bought it brand new from A1 Motorcycles in Ringwood (Melbourne) in 2013 for $13,500,” against a launch price of $16K plus orc.

“After riding it for about 12 months, I came to grief near King Lake in Victoria. The damage was only superficial, so I opted to modify the bike given the cost of replacement OEM parts, and to satisfy my ambition to own a custom motorcycle as I had always wanted something different like a cafe racer, but based on a modern layout. After surfing the web for ideas, I noticed the LSL website which, at the time, had a project Nuda 900 which had a bunch of simple panel replacements and a headlight replacement.”

Rather than tackle the project himself, Josh called on expert help in the form of Brad Wiseman from Bikecraft in Mordialloc.

“Brad’s intuition and vision about how each of the mods fitted together was second to none, particularly in the case of the clip-ons, which were (Ducati) 1098 items from Gilles Tooling,” Josh says. “Clearances, diameter size, wiring and position all needed to be finessed and the end result was perfect. Brad was able to source the tank cover, headlight, and front fender from LSL in Germany which, from my recollection, weren’t being produced by the company at the time. Lastly, the seat was cut to shape perfectly and the paint came out exactly as we wanted.”

The LSL bodywork transforms the Nuda from oversized dirt bike to classic cafe racer, but the kit never went into production before the Nuda was discontinued so very few were sold. LSL preferred to fi t the few kits they had themselves to ensure quality control; any others had to prove their worth before LSL would part with the parts.

The LSL petrol tank is a dummy (as is the original Husqvarna tank) with the actual 13-litre fuel cell hidden low in the chassis. The dummy LSL tank comprises two halves, split down the middle, with an alloy strip that forms the spine. The front mudguard is also from LSL, as is the headlight.

Apart from that, the seat, multi-adjustable Gilles Tooling clip-ons, Rizoma mirrors and indicators, and a titanium Arrow exhaust, the bike is pretty much stock as a rock, including the engine, which was already radically modified by Husqvarna in the factory. It shares not much more than the crankcases, cylinders and heads with the underwhelming BMW F800 parallel twin, with an extra 100cc, more compression, larger valves, 25 per cent more power and, most importantly, offset 45-degree crankpins to make it fire like a traditional Harley-Davidson and add a truckload of character. There is literally no other engine like it on the planet!

More recently, Josh did a big suspension upgrade with Race Center in Brunswick, with FD-02 cartridges in the fully adjustable Sacks USD forks and a matching FD-02 package on the Öhlins down back.

“The suspension upgrade was done only recently, whichmy old man pushed me to do, as I was relatively happy with how everything was,” Josh says. “Both ends were substantially rebuilt and lowered with Race Center’s in-house technology. Darren was great to deal with, knowledgeable, and ultimately made the bike handle brilliantly, not to mention look a whole lot better with the lowered stance.”

The cost of the build was $7500, plus $2500 for the suspension. It was a seamless build completed in 12 months. “I’ll concede that the effort put into this build was modest in comparison to some of the other super custom builds out there. But I’m absolutely happy with the result. Naturally, I think everyone likes to compare what they have with others, and I’m glad (lucky) that I have something unique in a Husqvarna cafe racer.” Not that they’re ever finished.

“I’d like to get some rear-sets made,” Josh says. “I reckon it’s the only remaining piece of the puzzle. I considered getting some wire-spoked wheels and custom triple clamps made, but at this stage I’m happy enough with the standard items.”

Any advice for other first-timers considering their inaugural builds? “Try your best to imagine what you want the build to look like,” Josh says. “Use social media (Instagram is best) for inspiration. Then speak to a bike builder (if you need to) to establish those key, essential mods you’ll need to get the bike looking as close to what you imagine, like the seat unit, tank and handlebars. Then establish those secondary items, which might not be as important, like levers, rear-sets and calipers.

“For those primary and secondary items, to the extent possible, make a budget! If the amount exceeds what you can afford, look at ways to rein in aspects of your build. Or consider taking more time. There is no harm in that. It’s obviously not an exact science, and the likelihood will be that things cost more than you plan. But having some plan is better than no plan.”

Husqvarna was a Swedish armaments manufacturer founded near the town of Huskvarna in 1869. It started building bicycles in the late 19th century and motorcycles in 1903. It added its own engine factory in 1920 and enjoyed some racing success in the early 1930s, including four consecutive Swedish GPs.

The factory had a second run on the world stage 30 years later with lightweight two-stroke off-road bikes that made a mockery of the stodgy British four-stroke fare of the time, winning 14 motocross world championships and 24 enduro world championships.

Husqvarna’s motorcycle division was sold to Cagiva in 1987, and production transferred to Varese in Italy. (Staff unwilling to move from Sweden started Husaberg in its wake.) BMW Motorrad acquired Husqvarna in 2007, with the intention of operating Husqvarna as a separate entity.

In 2012, the all-new Husqvarna Nuda and Nuda R street bikes were released (the R scored better brakes and suspension). Styling was off -road influenced, based on a new frame, but the big news was the 900cc engine, a highly modified BMW F800R parallel twin that featured bigger bores (up 2mm to 84mm), longer stroke (up more than 5mm to 81mm), 1mm larger valves, raised compression ratio (12 to 13:1) and offsetting the BMW’s 360-degree crankpins by 45 degrees to make it fire like a Harley. Power was up by 20hp to 105hp at 8500rpm.

Alas, BMW sold Husqvarna to Aprilia in January, 2013, and the Nuda was discontinued, bringing an early end to what was a very special parallel twin. Good luck finding one.

BEST Literally one of a kind; didn’t break the bank; awesome engine

NOT SO GREAT Nothing at this price