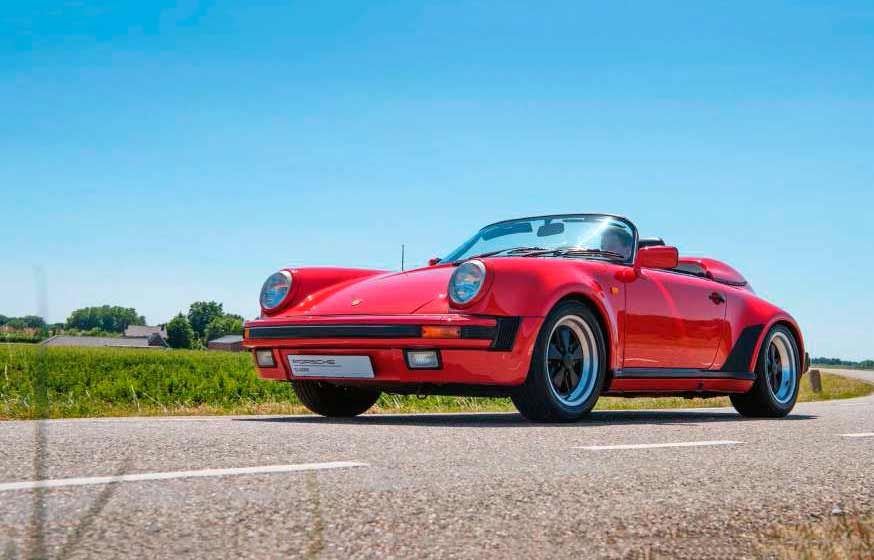 The 991 concept is Porsche’s fourth generation of 911 Speedster. We take a look at the first iteration, which celebrates its 30th birthday next year. Written by Kieron Fennelly. Photography by Rich Pearce.

Porsche rarely misses an opportunity to produce an anniversary model, but it is significant that the 991 Speedster Concept celebrates 70 years of the sports car rather than 30 years since the best known 911 Speedster, the impact-bumper 3.2. In fact, there was a 356 Speedster built from 1954 for the US; a specific cut-down and denuded barchetta sold for owners who wanted a competitive weekend racer. Not offered in Europe, the Speedster was the choice of the thinking American club racer who might otherwise have bought a Corvette, an Austin Healey or a Triumph TR2. The Speedster’s replacement was effectively the 1955 550/1500 RS Spyder as Porsche’s competition-build models switched to mid-engine.

When the 911 was launched, its subsequent race-oriented versions – the S with its various Sportpaketed upgrades or the race-engined R – were all based on the Coupe, as there was no open version of the 911. A somewhat half-hearted attempt to make a 911 convertible to replace the 356 Cabrio had been abandoned, with problems of structural rigidity gone unresolved. After the ruckus stirred up by Ralph Nader, future US legislation seemed likely to outlaw open cars. In the circumstances Porsche’s Targa model, conceived quickly in 1965, appeared to ill the gap in the market for an open sports car.

Ten years later Porsche knew how to make an open 911 sufficiently rigid: work on a possible Cabrio 924 had shown that a combination of the transmission tunnel and stronger passenger bulkhead largely overcame structural concerns. However, this was at a time when under CEO Ernst Fuhrmann, development of the 911 had been halted in favour of the transaxle 924 and 928. Board member for engineering Helmuth Bott, an open car devotee, was frustrated at this, as there was now no technical reason not to reintroduce a convertible, and as far as Porsche sales personnel were concerned there was plenty of demand to justify the model. Fuhrmann however was increasingly determined to make his legacy at Porsche the 928, and would not hear of it. Worse, feeling more and more isolated by his universally disliked stance on the 911, he is said to have threatened Bott with dismissal if the chief engineer persisted in a pet project of a simplified convertible 911, a latter day Speedster. Always loyal, Bott dutifully rolled the partially completed prototype out of his workshop in Weissach and into a discreet lock-up at the back.

Then Porsche underwent one of those sea changes, which seem to occur at ten-year intervals during its history. Fuhrmann left Porsche, and his replacement Peter Schutz, a Berlin-born US citizen, was the proverbial new broom. An engineer with a sales background, Schutz was quick to realise that the 911, that very symbol of Porsche, was also the only car of Zufenhausen’s three-model range which in fact made any profit. One of his first acts was to restart the 911 development programme. This enabled Weissach to proceed with the upgrade of the SC to the next 911 and to disinter plans for a convertible version, a hole in the line-up that Schutz, with his knowledge of the American consumer, could not comprehend. When he saw Bott’s tentative Speedster, he gave his second in command enthusiastic permission to develop that too.

The early 1980s were a time of intense activity at Porsche: Ferdinand Piëch’s Audi Quattros had excited everybody, and both Ferry and Bott thought at least some of the future lay in four-wheel drive. The engineering priority became what would become known as the 959, the Porsche 4×4 turbo supercar.

A joint venture with McLaren to supply the Woking firm with Formula 1 engines would occupy Hans Mezger’ group, and a return to sports car racing (also stopped under Fuhrmann) took further engineering resources. The remaining budget for the 911 was absorbed first by the Cabrio and development of the 3.2. Nevertheless, with Schutz’s typically enthusiastic support, which extended to authorising a production run of 200 cars, the ‘Bott Speedster’ as it had become known, started to take shape.

The idea was to repeat as far as possible the 1954 barchetta, which apart from its racing windscreen was no higher than the tops of its doors. The design studio produced a styling model, and in early 1983 a group under 911 programme manager Friedrich Bezner set to work to replicate the original. Of course there were no sporting pretensions for this new Speedster, which was based up to the waistline on the stock Carrera. What made it special was the wraparound windscreen, no more than five-inches high, and its top covered by a vast glass-fibre cover with an aperture for the driver. There were neither screen wipers nor any weather protection, but before these mundane practicalities could be addressed the project was again shelved as more pressing matters absorbed its development engineers.

However, three years on and with the 25th anniversary of the 911 on the horizon, Weissach once again dusted of the Speedster and presented it at the Frankfurt IAA in 1987. This Speedster was a typical concept car, intended to portray a ‘Clubsport’ version of an open 911. Like the original 1983 prototype it had the low windscreen and glass-fibre cover, and this time behind the driver’s seat was a slightly ostentatious roll bar. This was as exotic a 911 as the public had seen for years, and partly on the strength of its positive reception Porsche decided to launch the model as a derivative of the current Carrera 3.2 rather than wait for the new Type 964 as had been its original intention. In any case, engine development difficulties meant that the 964 launch was delayed by over a year; it made sense to market a production Speedster while the concept was still relatively fresh, even if it entailed using the existing 911.

Michel Thiriar, who has written extensively about Porsche Speedsters, says the production car, available from September 1988, was produced from Cabrio bodyshells which were modified by craftsmen in the old Reutter body shop at the back of Werk 2.

Naturally, the Speedster differed from the concept in that to obtain type approval it had to have windscreen wipers. No longer a vestigial wind deflector, the Speedster had a proper windscreen, though it was visibly more steeply raked and a good three-inches lower than the 911 Cabrio’s. Gone too was the all-over glass-fibre cover, replaced by a neat body-coloured item, slightly hooped to mimic aerodynamic shapes of old which masked the space where the Cabrio’s rear seats would have been. This hinged up to reveal a manually erected hood which Porsche was at pains to emphasise was not waterproof. Said to be a struggle to assemble, most Speedster hoods were destined to stay folded away. As its maker suggested, this would be a distinctly fair-weather Porsche. In other respects it was all stock 911: the wheels were seven- and eight-inch Fuchs, the engine the same 231bhp RoW or 217bhp US/Japan 3.2 and gearbox and suspension standard. Electric adjustment for the seats included height adjustment, and the headlight washers were fitted. To add to the Speedster’s appeal standard production was with the Turbo bodyshell, though about 160 narrow-body cars were made for specific customer orders.

Even today the 3.2 Speedster is a striking 911; 30 years ago it was decidedly racy looking, but over two years only 2,100 were built before the 3.2 range was withdrawn. This was partly to do with availability of Cabrio shells, but also with demand, which ultimately tailed of after an enthusiastic reception.

The Speedster would have stood more of a chance at the beginning of the decade when its shape and the air-cooled 911 itself were newer designs and the growing strength of the dollar assured a ready market in America, even if a Speedster would inevitably have duplicated the Targa and newly launched 911 Cabrio.

By 1988 the dollar was in free fall, as were much of Porsche’s vital US sales. A North American list price of almost $66,000 was somewhat theoretical said Motor Trend, whose appropriately named correspondent Jeff Karr got his hands on a Speedster in October 1989. He remarked that most punters were having to pay over $80,000 by the time leather seats, a limited-slip differential and various dealer premiums had been added; a 3.3 Turbo Targa could be had for less. This was the paradox of a 911 whose hood “ripped your fingernails of” and let in floods of water if not restricted to strictly blue-sky weather, an expensive toy likely to occupy the third stall in your garage. Yet, Karr remarked, as you drove of you were likely to capture more attention than anything else on the roads of the time.

The paradox continued: the original 1954 Speedster was cut down and lightened for competition and sold more cheaply. The widebody 3.2 Speedster not only cost more, but weighed more than its Carrera equivalent. On the other hand, on Motor Trend’s skidpad it achieved a higher lateral ‘g’ than the newly introduced 964 Carrera 4. On the open road it lacked the power steering and slick short-shift gearchange of the later model, yet its throttle response, handling and above all soundtrack were addictive, until you tried to go above 70mph, by which time the buffeting was deafening. A man who owned several over the years, Michel Thiriar comments on the “incoherence of the Speedster,” yet road testers were, like Karr, mostly generous in their praise. Helmuth Bott once said that the basic concept of the 911 “is so interesting that something will always occur to us to keep it attractive”. The subsequently assured classic status of the completely impractical 3.2 Speedster underlines how right he was.

Thanks The 3.2 Speedster in our pictures is for sale at Porsche Centre Gelderland. For more information visit porschecentrumgelderland.nl or call +31 (0) 26 356 0 911

BELOW Lowered and more steeply raked windscreen is a key hallmark of the Speedster’s unique design, which below the waist is standard 3.2 Carrera. BELOW Most of the First 911 Speedsters came with the 3.2’s widebody; shape of short side windows differs greatly to Cabriolet.

Porsche Speedster through the years

356: Built at the behest of US distributor Max Hoffman who said Porsche needed a cheaper model, the first Speedster was effectively a roofless 356 with a rudimentary windshield and simplified interior. A US-only road-going model of which 4,000 were assembled, it put Porsche firmly on the racing map in America.

964: Porsche reprised the 3.2 Speedster theme using the-then current 911, but despite an interior borrowed from the RS, a manual transmission and power steering, the 964 version offered no other advance over its predecessor and looked like a slightly desperate attempt to shore up lagging 964 sales in the early Nineties.

997: Two decades later, Porsche took up the Speedster idea again, but now the objective was clearer: a collector’s 911, production limited to a symbolic 356 units. Once again a hooped cover distinguished this lowered windscreen, two-seater 911, but the hood mechanism was not automatic as one have might hoped.

991: Apparently based on the GT3 rather than the more softly sprung Carrera, the concept suggests this will be closer to the original barchetta, a point emphasised by its silver paint and bonnet-mounted fuel filler. Its manual gearbox and centre-lock wheels also emphasise sporting pretensions. Production is likely in 2019; the only certainty is that its price will not undercut the base 991.