The Mercedes Benz SLC, built for a decade until October 1981, was the car the classic market overlooked until it was almost too late. While the R107 SL roadster on which the SLC was based has been collectable ever since its production ceased, and hence survives in substantial numbers, the C107 coded coupe became forgotten and unloved once the striking 126-series coupe arrived to replace it. A total of 62,888 SLCs were manufactured, hardly an inconsequential number, yet they are rarely seen, most having been sent to the scrapheap. 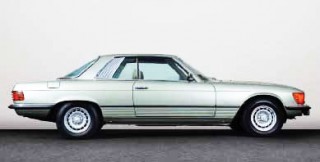 Perhaps people felt the SLC, 360mm longer in wheelbase and length than the SL, and with awkward rear window trims (there to disguise the fact that the rear windows could not be fully lowered), lacked the SL’s graceful lines. Values stayed low, which meant that relatively minor problems could spell a one-way trip to the crusher.

But things are now changing. As it has become apparent just how scarce these big pillarless coupes have become, collectors are having second thoughts and prices are rising. They are still to be found for £4,000 to £5,000, which gets you into a rolling project, but the big difference is to be seen at the other end of the market, with prices now closing on R107s.

So now is almost certainly your last chance to pay reasonable money for one of the most expensive and exclusive Mercedes from the 1970s. They are mechanically simple in most respects, immensely durable and there are lots of specialists who know them through and through. Just add bravery.

The Paris motor show of October 1971 saw the C107’s debut, six months after the SL roadster had been unveiled. The first model to go on sale, in February 1972, was the 350SLC using a 3.5-litre V8 engine producing 197bhp, this coming to the UK market two months after. In July 1972 the 450SLC was added but sold exclusively in North America until February 1973, its 4.5-litre V8 with US spec emissions equipment producing a paltry 192bhp; when it was launched in mainland Europe, and the UK, output was 222bhp. 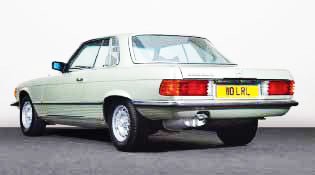 Both came with a three-speed automatic transmission as standard, but in some markets the 350 could be ordered with a four-speed manual gearbox. However once the 450 arrived, the 350 was dropped from the UK range, so is a very rare car here. SLCs were set up for comfort, with long coil suspension springs and Mercedes’ usual recirculating ball steering. In 1974, no doubt in response to the ‘oil crisis’ that had gripped the world since the previous year, Mercedes installed its 2.7-litre, DOHC, M110 six-cylinder engine, good for 182bhp, in both the SL and SLC, the latter badged 280SLC. It had a four- rather than three-speed automatic gearbox, and could also be ordered as a four-speed manual, which some were.

The 280SLC was not sold in the UK at that point, therefore the 450SLC was the sole C107 delivered in Britain throughout the 1970s. Between November 1975 and February 1976 all three engines were modified for lower emissions, mechanical Bosch K-Jetronic fuel injection replacing the electronic D-Jetronic, and transistorised ignition replacing the time honoured points set up. The 450SLC’s output dropped slightly to 214bhp.

This is classic old school Mercedes-Benz. You sit behind a huge steering wheel, facing a dashboard that as well as being almost identical to the R107’s looks solid and functional, and you have the usual springy seats, more likely to be trimmed in velour than leather. The rear seat will take two adults, but space is not generous. 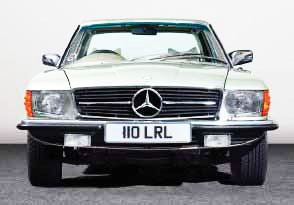 The 4.5 V8 is woofly and relaxed, but the pace is not quick, due in part to the lazy three-speed gearbox. Specialised five-litre cars apart, the late arriving 380SLC is widely reckoned to be the best model, thanks to the M116 engine being more lively, and the four-speed automatic more responsive than the three-speeder. The 2.7-litre in the 280SLC changes the car’s character, as it needs to be revved to shift the car briskly (though the C107 is not significantly heavier than the R107). Handling is failsafe, not at all sporty but well balanced.

The days of running, MOT’d C107s going for £1,000 to £2,000 are gone, those either no longer in existence or taken in hand. Nonetheless, few other classic Mercedes models show such a wide price range, seen for sale in classifieds for £5,000 to £6,000 but also at classic specialists for 10 times that, such as the 1975 450SLC with just 18,000 miles photographed here, offered by high end classic sports car specialist Howard Wise in Essex for £49,995. Cars without bodywork or mechanical issues, but not concours, are to be found in the £10,000 to £20,000 range. The sub £10,000 cars are usually offered privately, the top priced cars tending to appear only at classic dealers. However we’ve noticed of late that sellers are increasingly using the various classic auctions.

Bruce Greetham, director at Redditch based SL specialist, SL Shop, immediately warns of the problems of pre 1976 cars’ fuel system. “They have the early D-Jetronic injection system which is complicated to fix when it goes wrong,” he says, “and specialist knowledge is needed to understand it.” The rubber pipes tend to perish and leak.

The M117 V8 is reliable and long lasting, although sheer age can now work against it. For example, the exhaust manifold is likely to be rusted solid against the engine’s iron block, turning a straightforward task such as changing the manifold gasket into an engine-out job. This problem does not affect the all aluminium 380SLC M116 engine.

On all M117 engines, you must check the condition of the camshaft chain – a long length of chain that serves both cylinder banks. A rattling noise means it could be about to break with potentially devastating consequences for the cylinder heads and valves. Also check the condition of the camshafts, by removing the oil filler cap and looking in at the state of the cam; if it’s worn, the opposite one is likely to be in the same condition.

From far left: No SLC apart from the 450 5.0/500 can be thought of as truly fast, but plentiful torque makes the V8s great cruisers, the in-line six not quite as effortless; almost all cars are an automatic.

There are no particular issues here, but once again age can be the enemy. The suspension and subframe bushes are likely to be worn, which affects handling, making the SLC feel vague at the front. It’s also likely that all of the suspension dampers will be worn and possibly leaking too.

Even when new the C107’s steering lacked much feel, and with wear added vagueness sets it. It may leak too, and to check this you will need to inspect from underneath, as leaks will not be spotted by looking in the engine bay. If the system ‘groans’ when lock is applied, the fluid in the steering reservoir may be too low. For brakes, it’s simply a question of checking for wear, but disc/pad replacement is not expensive at about £300.

The SLC is surprisingly long at 4.75m; rear side window slats a curiosity.

If there is a lot of body rust, walk away. “The body must be checked for advanced corrosion in the bulkhead areas, chassis legs, inner and outer sills, boot floor and floorpans and so on,” Bruce warns. “If this is evident on the car, then in most cases it is not worth undertaking repairs unless the car has some sentimental value. You can easily invest well over £60,000 on restoring a C107.”

Early cars came with steel wheels and colour matched hub caps, while later models had ‘Mexican hat’ alloys, all rims 14-inch. If the alloys are in poor condition, a set of four will be easy enough to source for £150 to £200. But if the tyres are worn, budget over £200 for each one – 205/70VR14 is no longer a mainstream size, so you’ll need a specialist classic tyre such as a Pirelli Cinturato.

The body must be checked for advanced corrosion in the bulkhead areas, chassis legs, inner and outer sills, boot floor and floorpans.

The interior is another crucial aspect of a C107. Most had a deep pile velour trim, which, unlike leather, does not look better with age. “The early interior fabrics are now hard to find, and the cloth is very expensive,” Bruce comments.

As on most classic cars, a sunroof is more of a curse than an asset. “The sunroof models can suffer with drainage problems front and rear, water leaking all the way down into the sills,” Bruce tells us. He also points out that the engine ECU (electronic control unit) is mounted in the passenger footwell, and if it suffers water ingress as a result of leaks into the cabin, the engine may run poorly.

After decades being shunned, during which it almost became extinct, the 107-series SLC has been rehabilitated in the eyes of collectors, and some now even hail it as a nicer car to drive than the R107 roadster. It’s certainly a better prospect if you don’t want the full exposure that a convertible subjects you to.

But affordable as they still can be, ownership of a C107 can never be half-hearted. You must be prepared to spend money maintaining it properly, and the uncomplicated nature of its design is not reflected in running costs, which will be high, at least until you get it sorted to your satisfaction. That said, look after an SLC when you buy it and the car will look after you when you come to sell it.

Rally car for the road 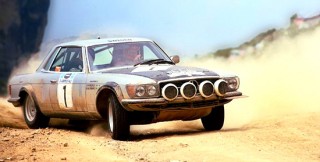 The 450SLC 5.0, introduced at the Frankfurt motor show in 1977 amounted to Mercedes’ first ‘homologation special’. With its five-litre, all aluminium V8 40kg lighter than the 4.5, and producing 237bhp/296lb ft, and a further 80kg shed through use of aluminium for the bonnet, bootlid and bumpers, and special lightweight wheels, this was the car Stuttgart entered in the World Rally Championship from 1978 to 1980. Badge apart, you can tell it from a regular C107 by the small black plastic wing on the bootlid, and the grey finish on the lower side bodywork. Furthermore, the seats are set slightly lower.

It received a four-speed automatic gearbox and slightly modified engine for 1980, though output remained the same, and was rebadged the 500SLC. Road trim production of both models totalled 2,769, and all came in left-hand drive. Even in their rallying days the cars lacked a high profile, and have never been celebrated in the way some homologation cars have (for example the 1990 190E 2.5-16 Evolution II), hence their values remain relatively modest. That said, good ones that do come up for sale will probably be £40,000 plus.

Rust is likely to be found ahead of the windscreen, on the floor, chassis legs, wings and doors

Early cars have electronic D-Jetronic injection, which is temperamental, and leaks

Thank you to Howard Wise in Essex for the loan of the 450SLC Tel 020 8418 9191 Web www.howardwisecars.co.ukand to SL Shop in Worcestershire for technical advice, and parts and servicing prices Tel 01386 791072 Web www.theslshop.com

THE BACK END SPOTTED FOR SALE

They are mechanically simple in most respects, and immensely durable.