How much does it cost to run an Audi RS6 C6

RUNNING AN RS6 How much does it really cost?

With C6 RS6s starting at around £25k, it’s never been easier to get into one of Audi’s V10 supercar chasers. And what a tempting proposition it is: 572bhp and 479lb/ft with 0-62mph in 4.6secs and potential for an easy 700+bhp with some minor tuning work. They also look great with blistered arches and that aggressive front end, and we don’t need to tell you how practical they are. But, and there’s always a ‘but’, what will it cost you to run one of these things? We spoke to some owners to find out what it really costs to run one of these 572bhp supercar chasers… 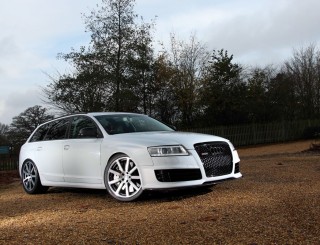 The first thing to get straight is that the RS6 C6 is a highly tuned performance car from the factory. Consequently, maintenance, servicing and replacement parts can be very expensive. At almost two tonnes it’s also a large heavy car, so it will be hard on things like tyres and brakes. For example, a pair of OEM brake pads will set you back around £200. The C6 is quite unforgiving on its brakes (especially if you drive it in a spirited manner), so you will get through plenty of pads. If the discs need replacing too, budget for around £900. That said, aftermarket items can be found for significantly less.

Depending on how you drive the car, a set of tyres may last 6-10,000 miles. Again, the car is heavy, so the fronts especially, will suffer from wear as the RS6’s natural tendency is to understeer when pushed hard. You should be running premium brand rubber on any RS Audi, so you’ll be looking at around £250-300 per tyre for a 275/35×20 tyre from the likes of Dunlop, Pirelli, Michelin or Continental. One area you should never skimp on is tyres.

Regular specialist servicing is a must for any RS6 C6. You can never have too many oil changes carried out, but be sure to get it done at least every 10,000 miles. The gearbox oil and filter should also be done every 20k miles (around £360), to keep the tiptronic unit it fine fettle. A major service will cost from around £600.

Although the RS6 C6 is generally a very robust and trouble free car, there are several known issues which must be factored into any prospective purchase. The first is the o-ring oil seal, which perishes over time. This leads to a small oil leak, which will only get worse if left. The part itself costs pennies, but due to its awkward location (thanks Audi), it’s a tricky job. Some specialists drop the engine, which adds significantly you the labour rates, but others, such as Unit 20, can don it in situ for under £2,000. This will need doing at some stage and the higher the mileage the RS6, the more likely it is to occur. If you find a car with documented proof of this being fixed, it’s a big plus point.

Of course, with the engine being dropped, many owners take the opportunity to have other work carried out at the same time. If you’re planning a hybrid turbo swap, this is the ideal time to do it.

The coolant pipes can corrode and leak, which if not dealt with can lead to engine failure. Again a good specialist will check areas like this and catch anything before it develops into something major and expensive. The same can be said of the DRC system, which although much better than the C5, can still suffer leaks with age. A replacement pipe and DRC re-gas will cost around £500.

This is the one thing that all RS6 owners agree upon – the C6 is s thirsty bugger. Around town, you can expect around 7-12mpg, which equates to around 60 miles for £25 of 99-RON fuel. You can get around 25mpg on a motorway run (if you drive very steadily), but be in no doubt – fuel economy is not the RS6’s strong point. If you hammer it, you’ll see below 10mpg – lower still if you’ve tuned it or take it on track. On average, an 80-litre tank will set you back over £100, and last around 250 miles – which always smarts a bit. As a comparison I drove to Manchester and back (360 miles) recently for around £60 in my A6 3.0 TDI. In an RS6, the same trip would have cost me around £140. But, then you need to ask yourself what you really want out of your Audi. If fuel economy is important, then, maybe a 572bhp, 5.0-litre twin turbo car isn’t for you. An RS3 for example would be far cheaper to run. On that note, the RS6 C7 is reckoned to be significantly more economical, dues to its more efficient 4.0 TFSI V8 and up to 30mpg is achievable on a motorway run.

Totally dependant on your age, driving history and where you live of course, but for most RS6 owners, who seem to be in their 30s and 40s, insurance isn’t actually too bad. Around £500-800 per year seems to be an average, but this will be affected if it’s been tuned. The fact it’s a ‘sensible’ family car seems to go in its favour, as opposed to something like a Porsche, even though it’s often just as quick.

So, given the potential for high running costs associated with the RS6 C6, is it still worth owning one of these V10 monsters? Well, having driven plenty of them, both stock and tuned, I have to say, a resounding yes. These things get under your skin. They are so refined and practical around town, but one squeeze of the throttle and they become animals, even in stock tune. Yes the consumables are expensive and yes, the RS6 is one of the thirstiest cars around, but they offer such thrills, that most owners will soon forget about these things. As long as you buy a good one (preferably one that’s had the oil seal issue fixed or factor in around £2k to get it done) then you can look forward to many miles of trouble free V10 fun. The C6 may cost more initially than a C5, but by the time you’ve spent up on fixing the wellknown issues (DRC, gearbox, etc), you’d be close to C6 money anyway. We will not see the likes of this engine again, so now’s the time to experience one for yourself.