The R8 coupe was launched to critical acclaim back in 2015. It’s lighter, faster, more advanced and arguably better looking than its predecessor. But Audi wasn’t finished yet, because in 2016, the Spyder appeared. I was fortunate to attend the UK unveiling in London and have to say I was mighty impressed with it. In pictures it looked very special, but in the metal, well it was nothing short of stunning. So when those nice people at the Audi UK PR office said I could test one for a week, I was rather excited. The only downside was this was December, so the weather wasn’t ideal for testing a 530bhp, £164,000 R8… 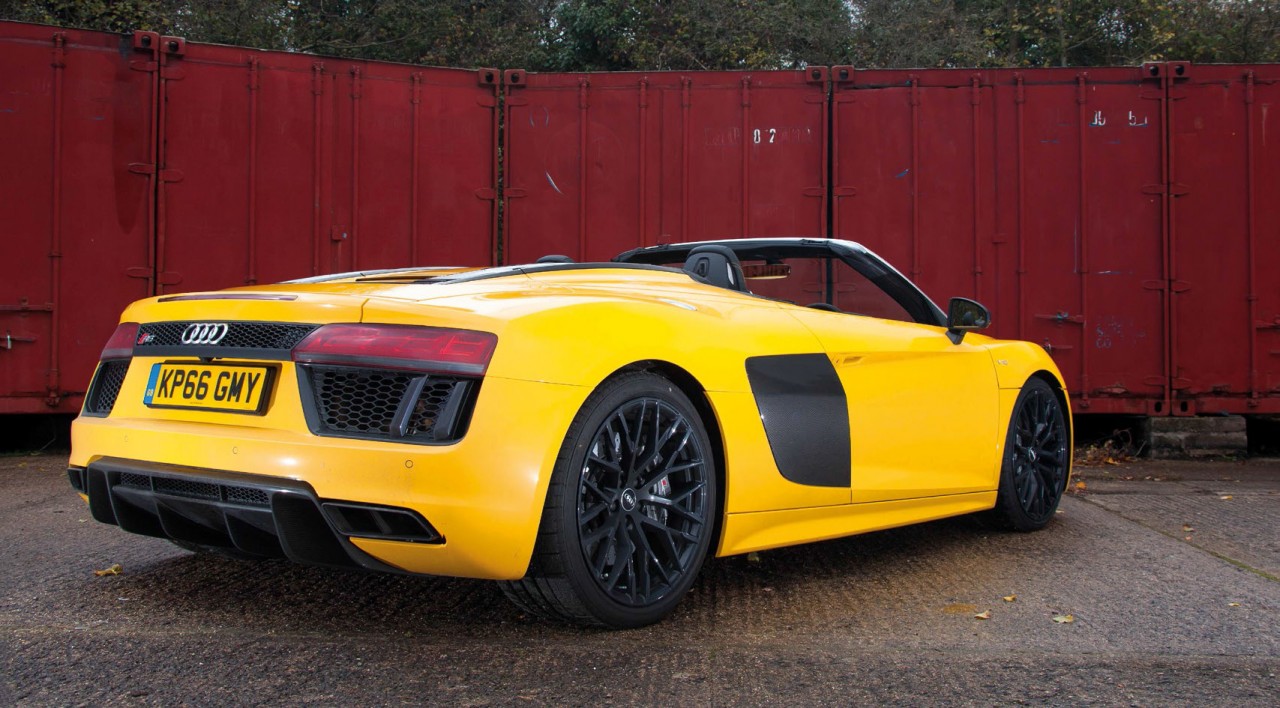 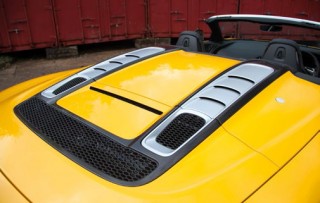 The Vegas yellow R8 arrived on a blustery Wednesday morning and immediately caused a stir in the street. But that was nothing. When I pushed the red start button on the steering wheel and that V10 crackled into life, the entire street (and the ones behind) were made aware. A quick spin around the block drew admiring glances from pretty much everyone and once back on the drive, my wife said me she could her me coming from three streets away. The exhaust was set to Sport, naturally.

Having driven the R8 Coupe, I was familiar with the controls, including the drive select and virtual cockpit. Even so, I spent a good ten minutes playing around with settings. Everything in the R8’s fabulously appointed cabin is easy to navigate and very intuitive. The design is simple, yet very pleasing to both view and touch. The highlight is the sports steering wheel, which has satellite buttons for the essential controls – the start/stop, exhaust sound, drive select and of course race mode. As you’d expect, you sit nice and low in the supportive Nappa leather seats and the driving position is excellent. Once I’d got comfortable, set the exhaust to loud, the drive select to dynamic, and the shifter to sport, I lowered the roof. 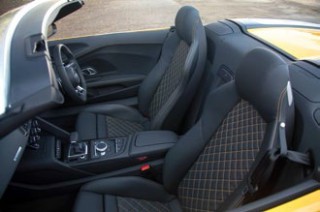 The roof itself is a fully acoustic fabric unit, which folds away in around 20secs. It’ll do this at speeds of up to 31mph – I know because I tried it. The rear mechanism whirs away behind you and the whole thing takes on an almost mesmerising quality as the roof is efficiently stowed away and the rear deck slots back into place. The deck itself is one of my favourite features, with the sculpted and vented design really adding something to the R8’s already attractive lines. The carbon pack fitted to this test car (a £4,900 option) looked especially good. 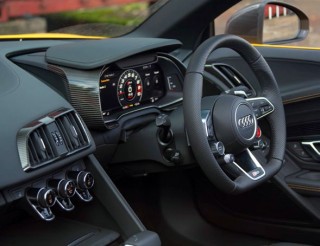 Wit the roof down; you of course get the full effect of that delicious 5.2 V10. If you thought it sounded good in the Coupe, then you have to hear it without a roof to dilute things. I can honestly say, that the R8 Spyder at full chat with the roof down is one of the best sounds I’ve ever experienced. That shrill, metallic bark of the V10 as it revs behind you will make you grin like a fool. I took several friends out for a drive and every single one laughed out loud when I nailed it. Above 5,000rpm it really is spine tingling.

My office is based on a small industrial estate and a bright yellow R8 soon had a small crowd around it, when I arrived for work. One of the forklift drivers, Wayne admitted, “That’s my dream car,” and was over the moon when he sat in it. He was rendered speechless when we went for a blast along the local country lanes, roof down of course. For me, that was the defining memory of running the R8 for a week. Everywhere I went became an occasion. From dropping my lad off at school, to going for lunch at my favourite country pub, everyone wanted to know about the yellow R8. “How much is it?” How fast is it?” “Can you take me out in it?” These were the questions that I was bombarded with wherever I went. I’ve driven some pretty special looking cars over the years, but this started more conversations, with everyone from kids, to grandmas, than anything I’ve ever known. And, it has to be said most comments were positive. A few said they’d prefer another colour and the odd one suggested they’d rather have the R8’s lairier sibling the Huracan, but generally people loved it. Of course, my little bald head poking out of the top on a bitterly cold morning also raised some smiles – I really must get a woolly hat. 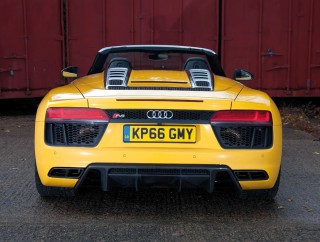 I decided right from the off that, unless it was raining, I was going to drive it everywhere with the roof down. I think that if you’ve shelled out for a convertible, then you should get the full benefit from it as much as possible – even if it is a bit chilly. Mind you, I did get some strange looks taking my boy, Sid to school in it on a frosty morning… Fortunately, the heaters are terrific and with the windows and clever rear wind deflector raised, there’s minimal buffeting.

The great thing about the R8 Spyder is that you can just get in and drive it. With drive select set to comfort and the S-tronic left in drive, you can just waft around with no fuss or drama. It’s a wide car, so you need to be aware on narrow lanes, but it feels very compact and easy to manoeuvre. But when you want to give it some beans, the character can change in an instant.

Switch to Sport and Dynamic mode, turn the exhaust up to full fat and go play. The 7-speed s-tronic box feels so well matched with the 5.2 V10. The changes are crisp and immediate and using the paddle shifters in manual mode you can really hang onto the gears and make it rev. The reward for this is that intoxicating sound that never gets old. In a tunnel it really is the stuff of dreams. It’s quick too. There’s no doubt the R8 is a fair weight, but it disguises the fact very well and you can use every drop of that 530bhp. 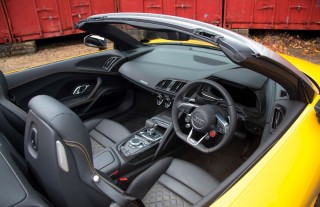 At the end of the day £164k is a lot of money, especially when you look at some of the opposition. But, if you’re in the market for a £128k car, another £36k probably isn’t going to faze you. Of course you could resist ticking some of the options, but they are so desirable, it would be hard. At the end of the week, I was very sad to see the R8 Spyder go. It proved to be practical enough to use day to day, made people smile and gave me so much enjoyment that I can’t think of any car I’ve liked driving more (original Sport quattro included). Be in no doubt, the R8 Spyder is an absolutely stunning machine.

Thanks to Will at FSUK gym for allowing us to use his car park for the shoot.