The concept of choice is something we take for granted these days. Sure, you may feel oppressed by the various political machinations that are playing out across the globe right now (we won’t delve too deeply into that, we’re not that sort of magazine) but there are certain basic freedoms that we all enjoy in a carefree manner on a daily basis which, were they to suddenly be rescinded, would make us really rather sad. Fancy strolling outside your front door right now, just to take a look at the sky? Feel like going for a pointless drive? Want to make yourself yet another coffee just for the hell of it? Go ahead, no-one’s judging. Treat yourself to a biscuit too. 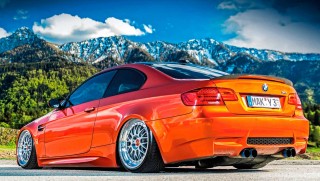 There are, of course, certain circumstances where people find themselves relieved of life’s more burdensome choices, and instead allow their decisions to be governed by the direction the cosmos seems to be guiding them in. And that’s OK too. Take Alexander Richter, for example. He’s the chap cheerfully ensconced within the sumptuously trimmed cabin of this near- hazardously orange E92. He calls a place named Wunsiedel home – that can be found in northeast Bavaria You know what else comes from Bavaria? Sure you do. (And if you don’t – look at all the shiny metal things flashing their wares throughout this mag. There you go.)

It’s not just proximity that’s led Alexander down the BMW ownership path either. “My dad owns a shop specialising in BMWs,” he says, “so ever since I was little I’ve been surrounded by BMWs. And now I work for BMW, selling BMWs.” We know, it’s a full-on assault isn’t it?

“I did once have a Mercedes E350,” he ponders scratching his chin thoughtfully, “but… no, having tried something else, I just had to get myself back into a BMW.”

Alexander’s first car was an E46 328i Coupe – which blows our lame first cars right out of the water – and since then he’s found himself wrenching away at an E34 M5, an 1802, and a Z1. So not just a bunch of old Beemers, but a selection of the finest cars the marque’s ever produced. He’s only 24 too, the jammy sod… and now this, an outrageously citrusy E92 M3. It was always inevitable that the next car would be carrying this badge, but why did he choose this particular model? 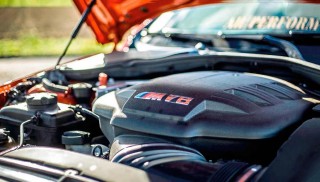 Our explanation comes by way of a personal history lesson. “I chose the E46 as my first car because it just seemed like the perfect starting point for me, and they weren’t that expensive at the time,” he reasons. “The engine was a key decision-maker; I love E46s still. And all of my cars have been modified to a degree – I can’t leave them as high as buses, so they usually end up running coilovers, and then every time the same thing starts.” We know what he means here. Once you start changing stuff, you feel like changing other stuff, it’s a slippery slope. “The sole exception is the Z1 – but that’s only because it’s in Class 1 condition and I don’t want to mess about with its originality.”

Okey doke, fair enough. But come on Alexander, get to the M3. “Yes, yes, I’m  coming to it,” he smiles. “You see, ever since I was a kid I always wanted to own an M3, and I also really love cars in unusual colours, ones that don’t often exist. So when I saw this M3 in Valencia orange I was completely in love.” If you’re not familiar with the shade – it’s a fair few tones adrift from, say, Sakhir orange – that’s possibly because this is a BMW Individual colour on the M3, and as you can see it really pops in the bright sunshine. It pulls off the clever trick of somehow visually shrinking the E92 as well, lending it an almost 1M-ish profile. Funny how befuddling an unexpected colour can be, isn’t it?

“The car was completely stock when I got it, and right from the start I knew I wanted to prepare it like a race car,” he grins. But that, evidently, hasn’t happened. Why? Because the E92 M3 is so damn good as a road car, that’s why. A few weeks of dominating straights with that bellowing V8 and mastering the curves with that perfectly- balanced chassis and Alexander was hooked. Suddenly #becauseracecar became simply #becauseM3. 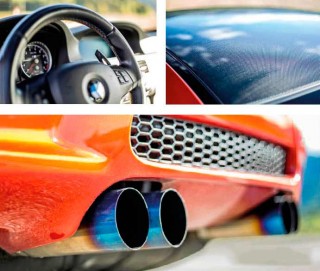 “I drove it around for five weeks, and totally changed my mind,” he admits. “Then I decided to put it on air…” Ah, but of course. What sensible man would do otherwise? The first order of business, then, was to tear out the OEM M3 suspension, as purposeful as it may be, and upgrade to a perfectly-tailored and fully righteous Air Lift Performance setup, rich in gravitational goodness with poise aplenty. Before long, Alexander felt that the newly-reframed attitude to altitude needed to be augmented by some fruity noises, so the stock exhaust was junked and replaced with a straight-through de-cat system with burnt titanium tips. Because V8s on open pipes are for winners, everyone says so. And then, of course, with the thing sitting on the floor and sounding rather rambunctious, the aesthetics needed a tweak (see what we were saying about these things snowballing?), so the car was treated to proper carbon fibre M3 GTS spoilers at either end.

“I fitted a set of BBS E88s in a square setup – ET20 10.5×19”,” he says. “They fitted in with the racing look I’d originally envisaged, and I wanted to retain at least part of that initial concept I also handmade some custom shift paddles at that time, and then opened up the headlights and painted them all black inside, with LED DRLs.” Subtle, huh? And still the mods kept coming, like a conveyor belt in a factory of awesome. A few other sets of wheels were tried out – although nothing really compared to the badass E88 rims – and then a white Nappa leather interior appeared, which is just about as far from Alexander’s race car brief as it’s possible to get Hey, it’s a free world, we can make these kinds of choices.

“I left the engine pretty much stock, aside from a remap and that exhaust system,” he shrugs. “I just liked it the way it was. The body’s all stock too, as I reckon BMW did an amazing job with the design of this car, it doesn’t need me bolting anything to it – I wanted to achieve an OEM+ look. But I was very keen to smash it to the ground too, naturally; I used Air Lift suspension because it’s the best available for the E92, and I’ve never had any problems with it “All the work was carried out at AH-Performance,” he continues. “Jan is an awesome guy – he spent around half a summer and one full winter on it, and honestly I’d give him any car I had to work on and just let him do it without looking.

He knows everything about this stuff and it always comes out perfect I have to say a big thanks to Thom and his guys too – they were just perfect.’

Alexander has a good long think when we ask him what his favourite element of the build is, and it ultimately comes down to a toss-up between the air-ride and the exhaust – although that alluring nappa leather certainly gets a look-in, as the juxtaposition of orange and white is just too gorgeous for words. 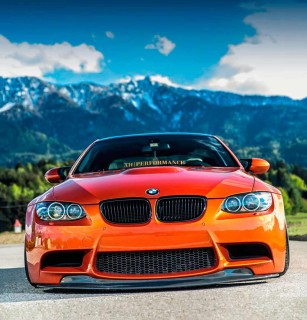 “Actually, no, my favourite thing about the car is opening it up on the autobahn,” he smirks, somewhat malevolently. “It feels amazing at 180mph, and the air-ride behaves perfectly at high speed – even better than coil overs.” See, it’s fun to break out of your conventions sometimes: a lifelong static enthusiast, won over by bags. Obviously Alexander’s not straying too far outside of his comfort zone, it’s not as if he’ll ever be buying anything other than a BMW… but within that ingrained remit, he allows himself the freedom of choice. Lateral thinking, offbeat decision-making, this E92 is choice in the most 1980s-slang way. Totally choice. And that’s a very special kind of freedom.

THANKS Jan at AH Performance, and also Alois at AH-Exdusive Parts

“I did once have a Mercedes-Benz E350 but having tried something else, I just had to get myself back into a BMW”