Let’s talk about colour. It’s hugely important to your enjoyment of a car. We’d like to think we’re not the only ones who’ve bought a car in that past that was the right car, but in the wrong colour and, as a result, we’ve really struggled to bond with it But sometimes an unexpected colour can really surprise you. Think of E30 colours and you’re probably not going to be thinking of Luxor beige as being among your top picks but, wow, Sandeep Gill’s E30 Cab is working that shade in a big way and we are loving it.

Sandeep grew up around BMWs, his dad owning an E21 and an E30 and they made a big impression when he was little. “I couldn’t wait to get into them and go for a drive!” he laughs. “With My dad being a mechanic and my uncle owning his own garage I had the opportunity to go to there on the weekends.

I would often do this just so I could sit in the BMWs that were there. My youngest uncle (who for the time was super cool) also had a passion for cars; he had this beautiful E30 325i M Tech 2 which he used to take me out in and let me drive it whilst seated in his lap.

This is where it all started… It was also a great way of spending time with my family,” he adds. That family bond remained when Sandeep got his hands on his first BMW, the very E30 325i he had loved as a young boy, which his uncle handed down to him. “It had been left neglected and hadn’t been driven for some time,” he explains. “All I had to do was get the car up and running again as the head gasket had gone. This car was special to me as it brought back fond childhood memories.” After this first E30 Sandeep switched to a Jag, before coming back to BMWs and working his way through an E38 735i, another E30 325i and an E46 325i Sport Touring before arriving at the car you see before you here. 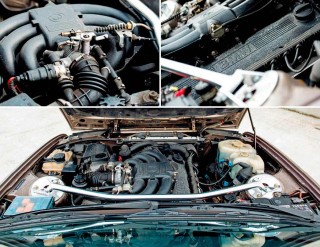 While someone else might have taken one look at this Luxor beige E30 and thought “nah,” for Sandeep the colour was a big part of its appeal, and it’s the first thing he mentions when we ask why he chose this particular car, but there were a number of other very good reasons to part with his hard-earned. “I had always wanted a convertible; it had fully documented history, loads of paperwork, bills and was an unmolested example. I wanted to put my own stamp on it, and I managed to get it for a good price,” says Sandeep. It wasn’t a mint example though, and needed some TLC as the dashboard was cracked, the fuel tank leaked when filled over halfway and there was a bit of rust in the usual places about the body, but nothing serious and certainly nothing that was going to put Sandeep off. His first thoughts were to drop it and fit an M Tech 2 kit, but then he realised that wasn’t the right direction to take this particular E30 in. “Once I got it home I couldn’t justify doing that to this pre facelift Chromie,” he says, “so, I decided to restore it mechanically and to lower the body slightly.”

Perhaps surprisingly Sandeep didn’t tend to the car’s cosmetics to begin with, instead rebuilding the engine, though that hadn’t actually been the plan. It turned into a big job and a lot of work that you can’t see has gone into this M20. The head was skimmed and then rebuilt with new valves and stem seals; new camshaft valve springs were added along with an uprated cam, upgraded belts all-round and new gaskets throughout including a new head gasket. Sandeep also added a new radiator, distributor, water pump and new spark plugs, resulting in one very healthy engine. “It took about six months in total,” he says. “The plan was only to service the engine as the car was running OK, but the deeper we looked we found things that needed upgrading or replacing,” and that’s the way we work, replace and upgrade, get everything like new and the results speak for themselves. 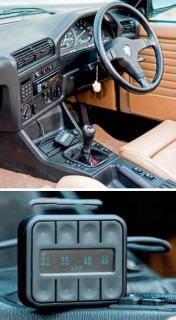 As Sandeep’s plan had always been to lower the car, it will come as no surprise to learn that, after spending six months under the bonnet, he was ready to sort out the stance. “I built this car on Spax shocks and springs, which dropped it by 35mm all-round, as I wanted it lower but I was on a budget as had just bought a house,” he explains and there’s life, getting in the way of fun, yet again. “I ran it like this for a few years, during which time I also became a father, and even though air-ride was my preference, as I wanted to get the car as low as possible, I simply couldn’t justify the cost As time went on and the kids got a little older, I finally came across an Air Lift kit with V2 management at a very good price and I couldn’t say no,” he grins. The car was handed over to Dips at Custom Cars to have the kit installed and as you can see, the E30 clearly loves air-ride as the drop is pretty outrageous, and the end result is stunning. Sandeep’s kept things simple on the install side, running a single tank tucked away in the boot, painted in body-matching Luxor beige, with a single Viair compressor mounted alongside it

A dramatic drop needs some dramatic wheels to complement it and Sandeep’s choice does not disappoint “Originally, I wanted Borbet Bs, Hartges splits or BBS RSs,” he says, all of them fine, fine choices, but then a little spanner fell into the works.

“I first saw the Schmidt wheels on a Jetta belonging to a good friend of mine, Parm Bhamra. One day Nick Sahota and I went to Parm’s house to buy some wheels for Nick; he bought the Schmidts and I literally fell in love with them. I think they are such a classy wheel, the Radinox dish looks awesome, and they suit the E30 so well.” He’s not wrong and not only do the wheels look good on the car, they look great against the beige bodywork, and with the arches rolled and modified for extra clearance they can tuck way up into the bodywork.

Speaking of bodywork, as mentioned earlier this E30 needed a bit of exterior TLC when Sandeep first got his hands on it, not that you’d have any clue about that now because it looks absolutely immaculate.

“I had a vision of the way I wanted it to look,” explains Sandeep, “sleek and low and as it came together I kept tweaking it to achieve the look I had visualised. I wanted the bodywork in pristine condition. I didn’t want to ruin the lines too much as that’s what sets the E30 off and all the body work was done by my uncle Paul at MP motors in Brentford.” The Cab’s been treated to a full respray, which is why that Luxor beige looks so silky and sexy, and a “Jimmy Hill” front lip has also been added, along with clear front and smoked side indicators. As with the exterior, Sandeep wanted to keep the interior as OEM as possible and didn’t want it to look too new as it could lose its character, which we can completely understand. Rather than having everything re-trimmed, he dropped the car off with Roger at Flux Trimmers who spent the next two weeks re-trimming the front seats, replacing some bolsters and Connolising the whole interior, including the door cards, and the results are stunning. Sandeep has also upgraded the audio and this E30 is now equipped with a set of Hertz 5.25 component speakers up front, Alpine 5.25 co-axial speakers at the rear with an Alpine head unit and it’s all topped-off with a Pioneer amp.

It’s taken Sandeep five years to get the car where it is today and it’s safe to say it was worth every moment and every penny that he’s put it into. He’s built a beautiful car, it’s so clean, he’s kept that classic E30 styling in its purest form and and it just looks good.

So is it finished? Is such a thing possible? Well, it certainly sounds like it is, at least for the time being. “I’m happy with the way the car is; now I just want to drive and enjoy it,” he smiles, before adding “sometimes less is more. That said I’m always on the lookout for new wheels,” he chuckles and that’s something we can all relate to.

THANKS I would like to thank my wife for being patient on all the late nights through the build, Sat Ubbey, Biggy, my dad and Paul at MP Motors Brentford, Dips (Custom Cars) I am very fortunate to be able to pursue my passion and am grateful for the help along the way, Roger Omolu (Flux Trimmers)

M20 might look stock but has been fully rebuilt. Air install is clean and simple, with a body-coloured air tank. Perfect ride height is just a button press away.