The BMW M5 has always been a symbol of Jekyll-and-Hyde ntortionism, wrapping improbable power up inside a relatively sober suit The genesis of the line, the BMW E28, took the engine from the BMW M1 E26 – which, let’s face it, was basically a Lamborghini with a BMW badge, ldnda – and plonked it into a four-door saloon that no-one but the initiated would have looked twice at on the road. (OK, it was a little more complex than that, but you get the idea.) Subsequent generations continued the theme in fine style, but it was the E60, launched in 2005, that really turned the wick up. Here was a car, on sale from your local dealership with a warranty and everything, that was packing a Formula One engine. 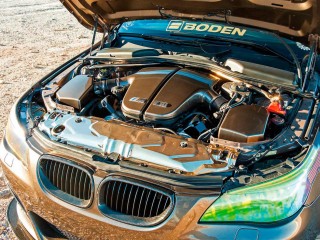 Well, alright, it wasn’t a Formula One engine, but it was very much inspired by the BMW Sauber F1 programme. The world’s first production saloon to be sold with a V10 powerhouse, that mighty motor was a high-rewing, 90°, 5.0-litre monster, with forged pistons and crank, cast aluminium block and heads, and a frankly absurd 507hp peak.

An M5 is more than just an engine, naturally – it must also be a luxury GT cruiser, a hyperactive sports car, a practical family runabout and an enthusiasts’ aspiration, and the E60 ticked all of these boxes with a thick red Sharpie. It was all the car you could ever need, it was perfect right out of the box.

However, as you may have gathered, we’re not all that enthused by standard cars around here, which is why the M5 you’re looking at is sporting more than a few tweaks. Its owner, Las Vegas resident Joseph Sybico, has achieved the impressive feat of improving upon perfection – taking a seemingly flawless base and making it exponentially superior in numerous distinct areas. It hasn’t been easy though! No, this has been a nine-year labour of love. Our buddy Joe’s worked hard to earn that ‘FASTDAD’ licence plate, but the fruits of his labours taste all the sweeter to his kids today. He’s the coolest pop in the school parking lot. 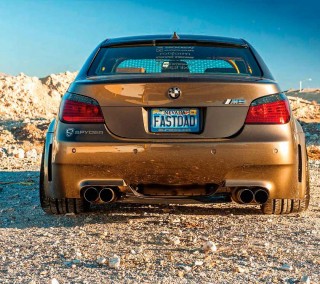 Intriguingly, it hasn’t always been about BMWs for Joe. It does sometimes take people a while to find their true path, and his motoring history had to get a bit of globetrotting out of its system before settling down in Bavaria. “I modified an Acura Integra to Japanese Honda Type R specs, then turbocharged it,” he tells us. “I also fully restored a 1960 Chevrolet Impala, which was running 14″ wires, air-ride, chrome everything…”

So why BMWs then, how did that all fit into this lavish Vegas lifestyle? “It was all down to my wife,” he grins. “She bought a new 3 Series in 2002 and that’s where the love began; the E46 platform hooked me in – in my eyes, the BMW lines are timeless classics and the inline-six motor is nothing short of perfection! Add the attention to detail in every model, and it’s something really special – and they were our first matching ‘his-and-hers’ cars too.” Before long, Joe found himself in a 4.4-litre X5 (sensible family choice, with two young boys – but not that sensible…!) – and the M5?

That was a little bit of mischief. “I basically bought it because I was able to bamboozle my wife,” he smirks. “I convinced her that it was a sensible upgrade from the E46 because a big sedan would be a better, safer family car!”

Sure, you can’t argue with that And having found this car in a local dealership, resplendent in its Individual Sepang bronze paint, it was love at first sight. Joe snapped it up, brought it home, and immediately started tearing it apart and changing stuff. “I’m very much a built-not-bought sort of guy,” he assures us. “I knew what I wanted to do, and I didn’t waste any time.” In the twinkling of an eye, that rorty V10 was exponentially amplified by a Dinan exhaust system, while Mrs S surprised Joe with a set of KW V3 coilovers to complement his shiny new 21” HRE rims. This, naturally, was merely the starting point of the adventure. 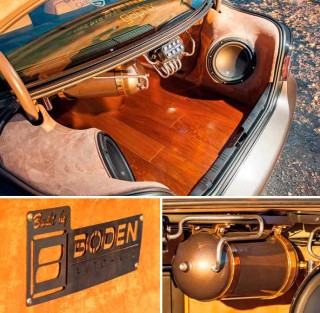 “Fortunately, over the course of this whole project, I haven’t run into any problems. Except maybe time itself,” he ponders. “I always want everything done yesterday!”

We can certainly relate to that And among the treats that found themselves being fitted not-quite-yesterday were a set of Evo Sport pulleys, RPI exhaust manifolds (gloriously devoid of cats or resonators), BMC filters, and a colour-matched air box and plenum. Oh yes, and the 24-carat gold-plated strut brace. Gold, you see, would become something of a theme. It’s just that sort of bailer outlook you find in Nevada’s zaniest city.

“I eventually decided to make the swap to AccuAir suspension, simply because I liked the idea of going up and down at the touch of a button,” he reasons. We imagine there’s more than a shade of that old Impala build rearing its head here too. The ingrained muscle car DNA that’s intertwined with the helices of every true-blue American does tend to filter its way through into all comers of reality.

“I did love the HRE wheels,” he continues, “it’s a great quality brand, and only fitting for a car like the M5. But I also loved the design, style and quality of the Rotiform WRWs, and ultimately chose to make the swap, to change up the look and try something new.

“Overall, I wanted to keep the build classy and tasteful, so the wheels fit in nicely, and that continues through to the interior I wanted to do something different there, to stand out from the crowd, and I looked at many different images and designs. I came up with my own ideas and collaborated with Boden AutoHaus; they took two months to bring my ideas to life, tweaking a little here and there. It’s my interior, done how I wanted, and I’m happy with the outcome!” The stock M5 seats have been retained – Joe couldn’t face losing them, they’re just too comfortable – but all of the innards have

been retrimmed in peanut butter-coloured leather and suede, with the door cards and floor mats trimmed to match the seat centres. So no dirty shoes in here, please… The boot install  is equally eye-catching, featuring an oh-so-on-trend wooden floor, custom sub enclosures, colour-coded air tanks, and genuine 24-carat gold-plated hardware, to match that strut brace and the gold-coloured roll-cage. It sounds brash on paper, but check the photos, it really works. 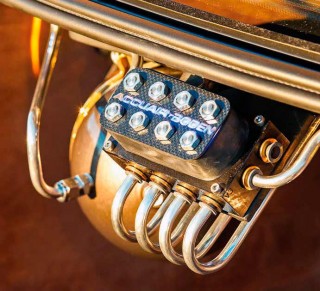 Rather more involved is the exterior treatment, with Joe embarking upon a unique, custom wide-body accentuation, all in cold hard steel. The quality of the work is such that you mightn’t know the arches had been modded so extensively unless you were a proper E60 nerd, but the in-your-face-ness of it all really speaks for itself. Those fat Rotiforms – the rears are 12.5” wide! — need somewhere cosy to tuck into when Joe airs out, and his lovingly crafted wings hug them like a warm cuddle at Christmas.

“It’s definitely a labour of love, and I don’t reckon it’ll ever be finished,” says Joe (but what project ever truly is?). “I’m really happy with how it’s turned out, and I think the AccuAir setup is my favourite upgrade so far – the ability to hit a button to lower it or raise the car up to go over a speed bump or high driveway is priceless. It’s a no-scrape zone!” Which is probably a good thing, if he’s rolling with the family aboard along with all of the gear that comes with them.

So what’s next for the M5, then? “That’d be telling,” Joe grins. “But I’ll definitely let you guys know if and when it gets crazy…” We’ve spotted that he also has a 1989 E30 and a 2008 E92 M3 in the garage, so it’ll be interesting to see which directions all of these things take. But for now, Joe’s happy to make good on the promises that the ‘FASTDAD’ plate dishes out. Trips to the supermarket and runs to soccer practice will never be the same again. 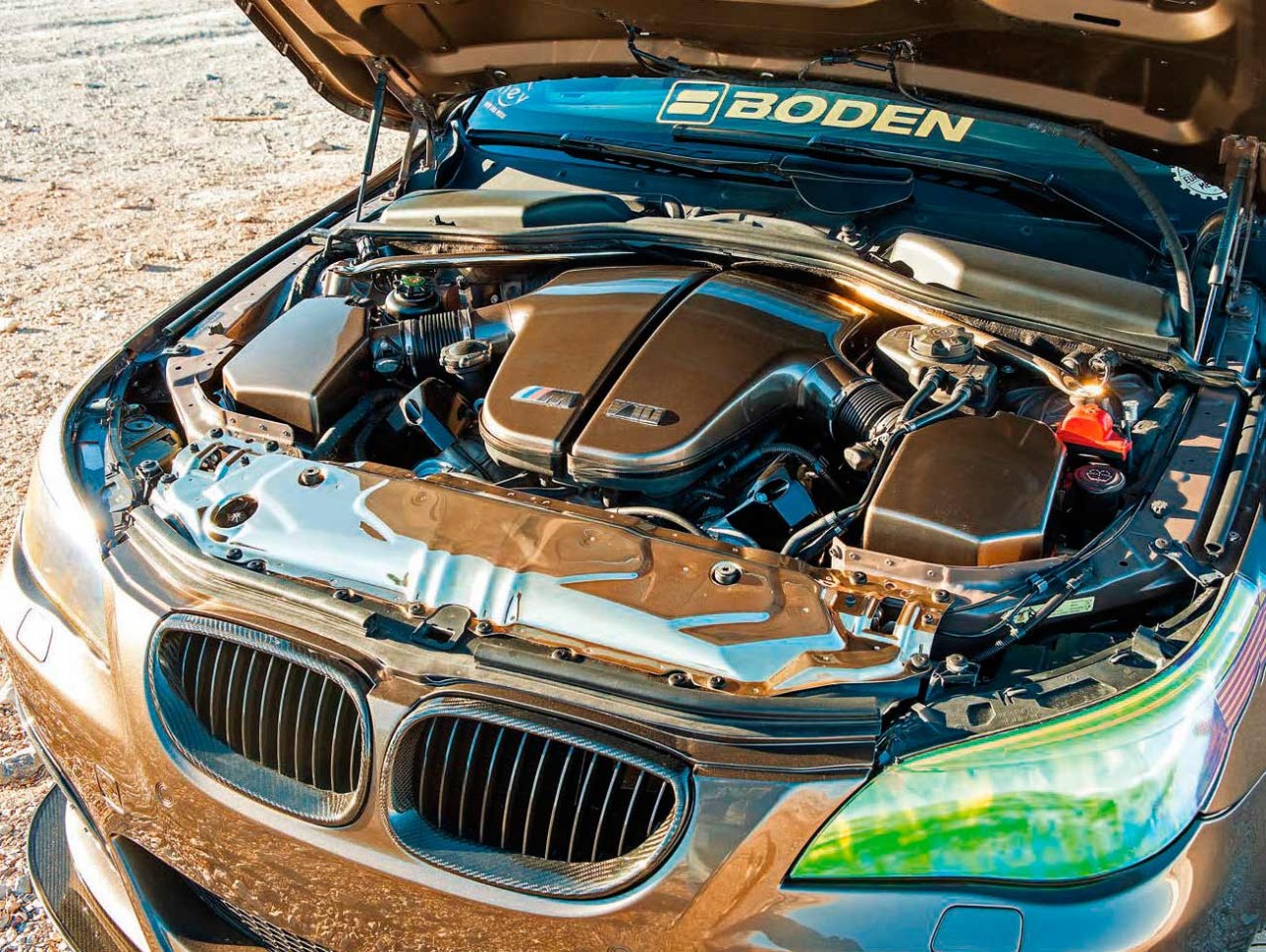 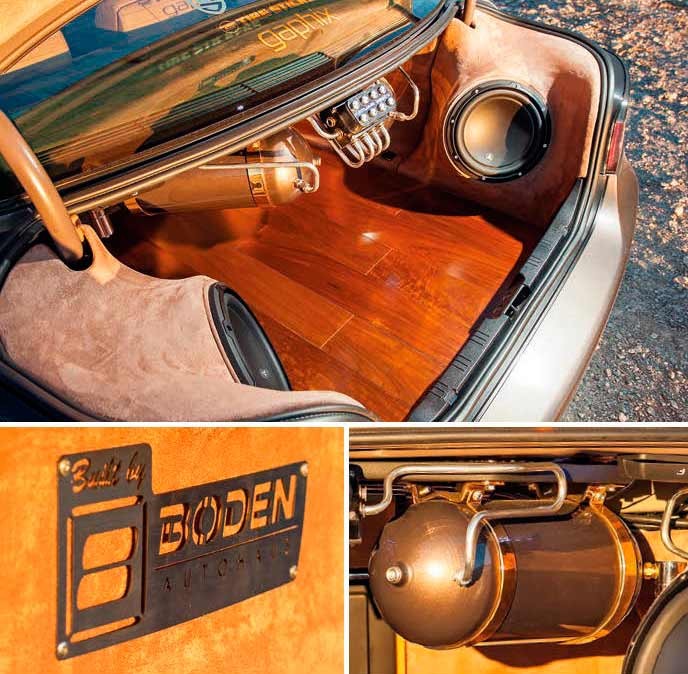 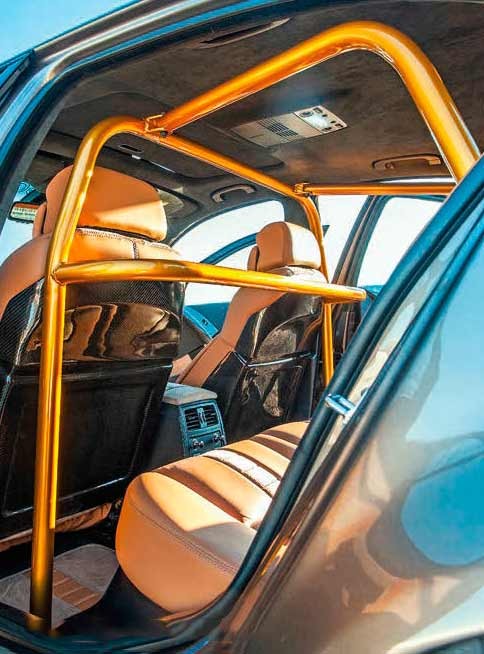 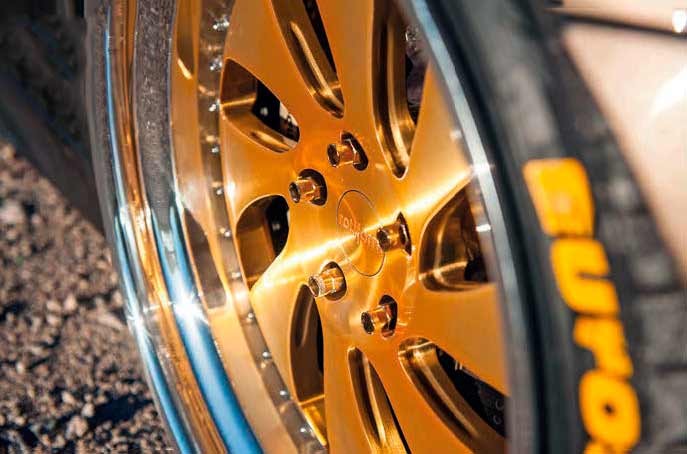 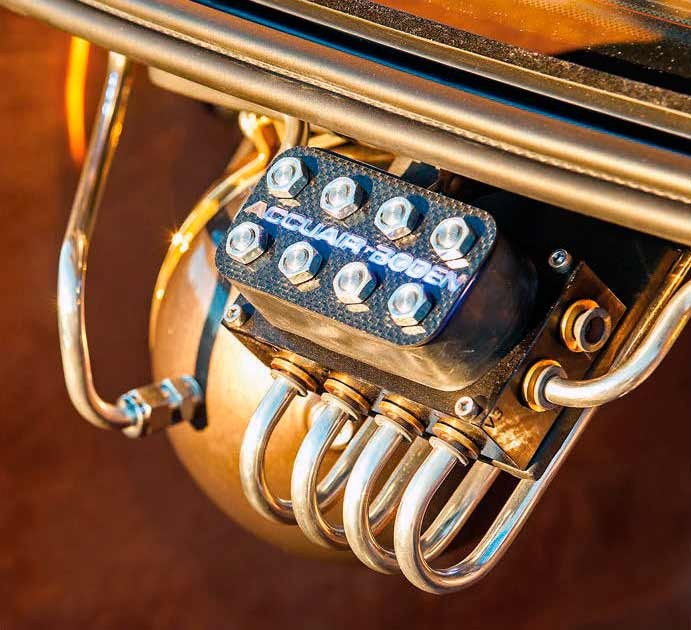 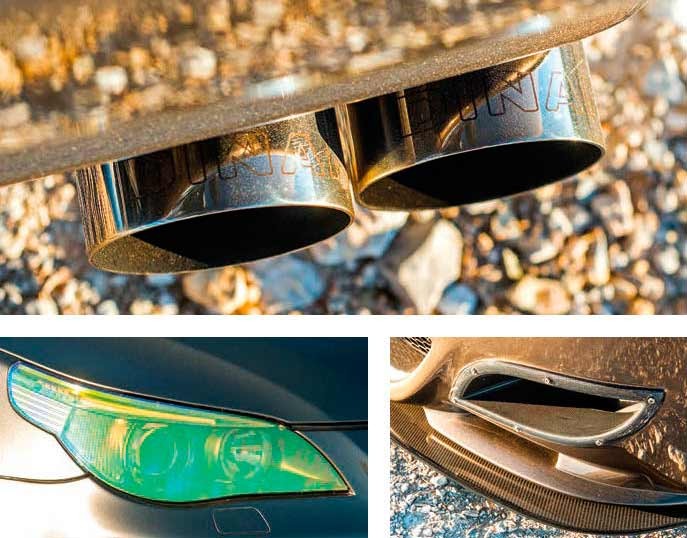 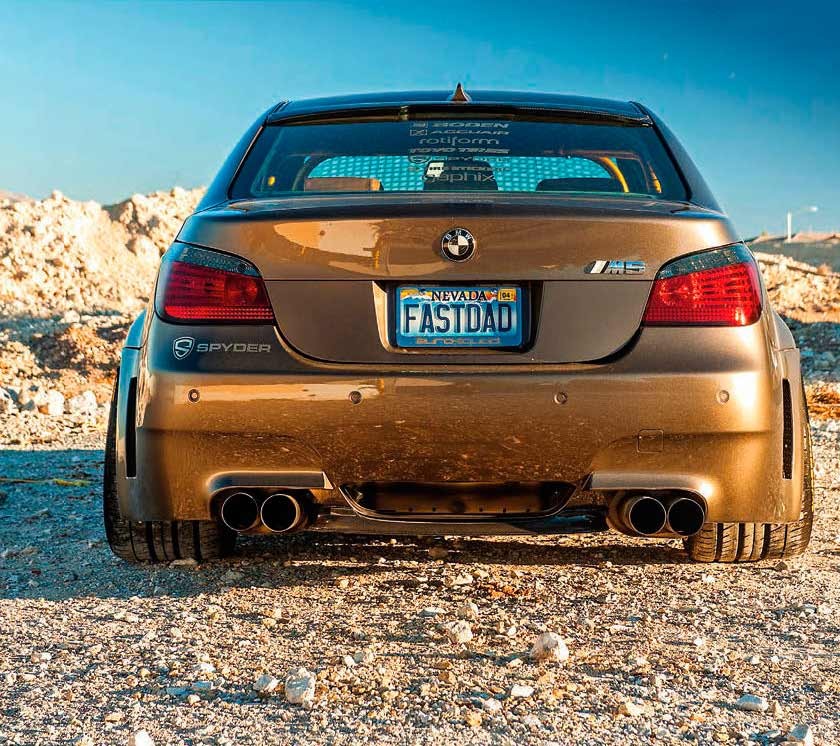 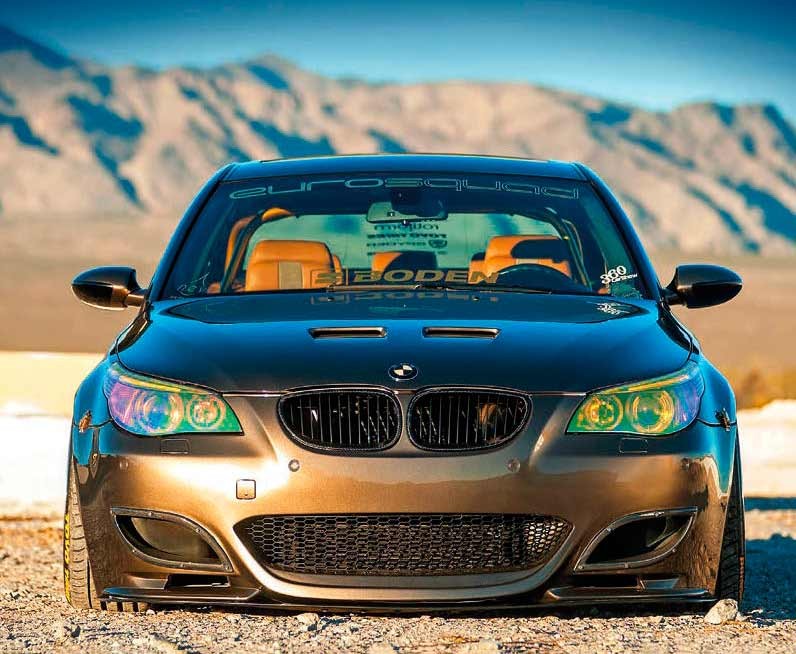 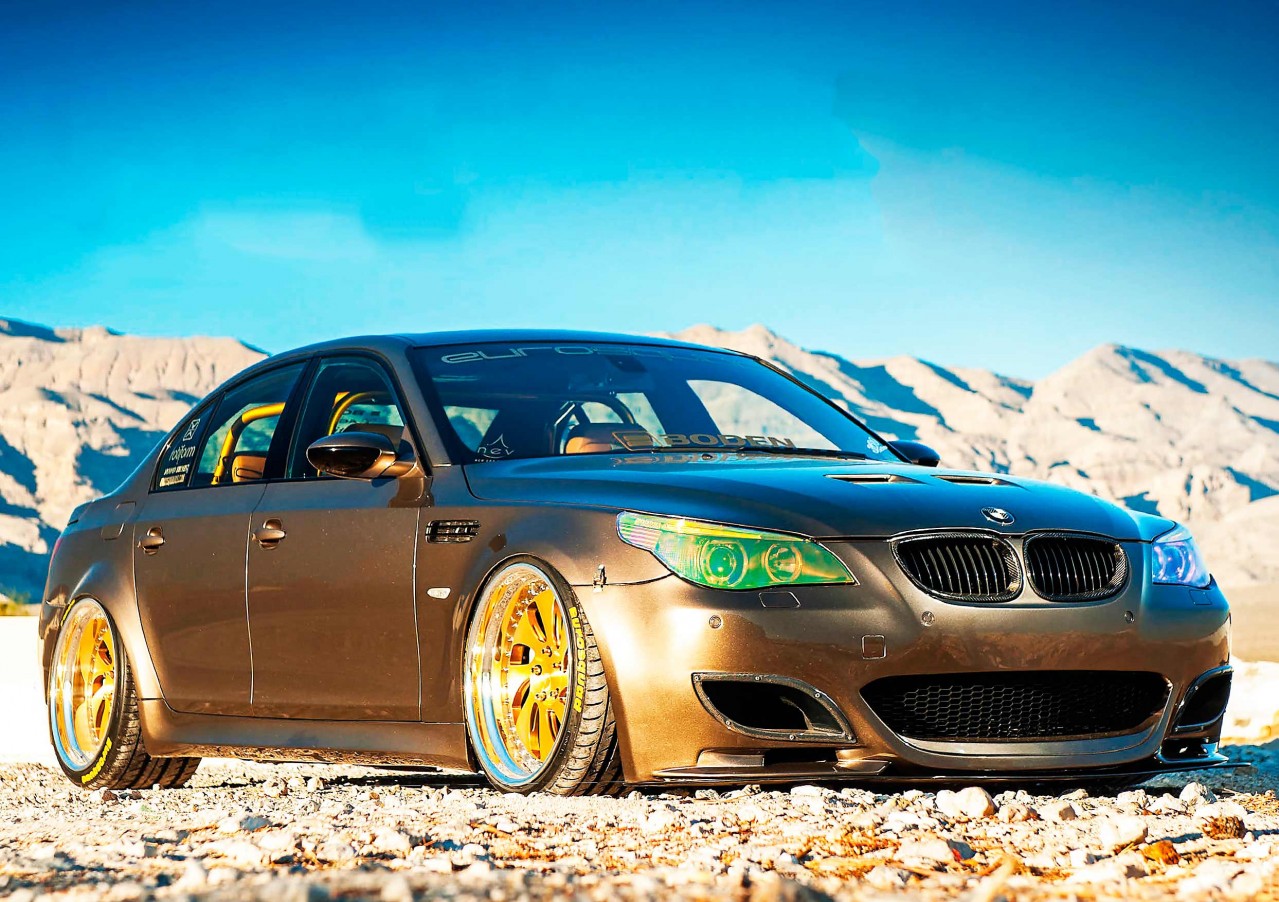