We love every car we feature, we’ve probably said that before, and if we didn’t we wouldn’t be featuring them, it makes sense. Occasionally, though, we come across a car that just looks and feels so right that we fall in love with it on a personal level and Gary Jerry’s supercharged E36 M3 is one such car. Everything about it is right, from the stunning Avus blue paintwork to the way it sits, the fact that it’s supercharged, everything just comes together and makes it the sort of car that you want to own, the sort of car that makes you go off onto Autotrader and start fantasising about buying one. Even before you start reading this feature, looking through the pictures will immediately tell you that this car has been showered with love throughout its life. 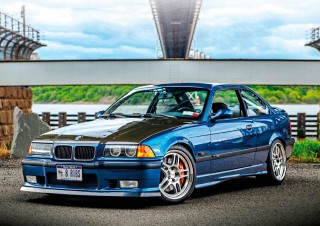 That isn’t surprising when you learn that for Gary this has been a very long-term relationship, 15 years no less, and this 1995 E36 M3 was his first BMW so it’s definitely been an involved ownership experience and he’s clearly smitten with the car. Gary first became interested in BMWs when he got smoked by an E36 M3 on the highway while in his 1986 Toyota Supra and decided he’d like to own one someday. But, when the opportunity actually arose, he didn’t jump at the chance to buy a BMW straight away. “I was working at a hospital,” he begins, “and a doctor found out I was into cars and we started talking. He mentioned that he had a ’95 M3 and asked if I was interested in buying it I told him no because it was the year 2000 and I was not going to buy another car, especially a BMW because they were expensive. I told him no thank you without even going to see the car. A year passed and the same doctor approached me again and asked me once more if I was interested in buying the M3 and that it was in the parking lot. I saw the car and had to put my poker face on… It was immaculate and only had 6000 miles on the clock. I asked him how much he wanted and he responded “Tell me a price” and that as long as it covered the balance owed on the car we had a deal. The amount was incredible, so cheap for the time, and that is how I got the car…”

Considering how immaculate the M3 was when he took over ownership it’s unsurprising that Gary had zero plans for the car to begin with, beyond driving it on the weekends, but that changed slowly. It was 2005 when he first started to build the car and that’s also when he set up Performance Auto Lounge and started modifying cars for other people, creating some stunning BMWs in the process, going from no mods to major mods in a very short space of time. “When I first started to build the car I was unaware of its potential,” says Gary, “so I did small modifications, due to having a warranty still on the car. I put every Dinan stage on the car, from stage one, which was a cold air intake and tune, to its stage one supercharger kit, which made 340hp,” and we have to interject here because a supercharger is not a small modification. Anyway, we’ll let Gary carry on. “After the warranty ran out and my knowledge was growing, in 2009 I upgraded the supercharger kit by mixing it with an RMS chargecooler upgrade kit and paired it with Karl’s Tune from Active Autowerke on an 11 psi pulley. In 2013 I thought I was done since I broke the 400whp mark (403whp) but I realised that I could do so much more, so after getting some blow-by in the coolant, which pressurized the hoses, I changed the head gasket to an MLS item and added 256/264 Schrick cams, uprated injectors and fuel pump, and I also upgraded to Active Autowerke’s TVack Pipe which gave me 20whp alone. With a Porsche MAF and 40 lb injectors power jumped to 436whp at 13 psi. After that I was happy but not satisfied, so in 2015 I worked on the heads with Jim from Metric Mechanic and boosted the car up to 17 psi and, though not fully timed, I am now at 458whp with Active’s water/meth kit and tune. It’s running rich at the moment so my plan now is to complete the tune to ensure it’s running perfectly. I also made an upgraded mechanical fan kit for the car which keeps it cool in high heat situations. My friends tell me they hear me coming from a mile away,” he laughs. 458whp is a lot, over 500hp at the crank, but what you have to remember is that Gary’s starting point was so much lower than our Euro M3s, just 240hp, so he’s more than doubled that figure which is quite a feat

Obviously the chassis needed attention with all these power upgrades going on and when it came to suspension, it was an easy decision. “I am currently an authorised dealer for Active Autowerke, Fortune Auto Suspension kits, UUC Motowerks and Himer Motorsport and I use their products to ensure that they are optimal for my customers. I also I believe the car has to handle great and instil confidence in the driver. I am using Fortune Auto 510 bespoke suspension, the first 510 series kit built for an E36 M3, with upgraded springs from Swift Springs. I’m also running Turner Motorsport rear adjustable camber arms, UUC polyurethane engine mounts, gearbox mounts, and polyurethane bushes for the front control arms, rear upper shock mounts and rear control arms. I’ve added a UUC short shifter, H&R anti-roll bars front and rear with Teflon-coated bushes and X-Brace Reinforcement.” With such a comprehensive line-up of chassis upgrades you can bet that this M3 feels razor-sharp out on the road and while we can’t appreciate how it handles, we can certainly appreciate the way it looks because it sits perfectly.

If you’re in Europe, the company that made Gary’s wheels is not likely to be a name you’re going to be especially familiar with, but Fikse makes some fantastic custom forged wheels and the Profil 5S is one of them. “I liked the way it looks and it is a proven race wheel, explains Gary as we discuss his choice. “I worked closely with Alan of Fikse in developing the wheel design for my car, it was a tall order but it worked out well and this is the only set designed like this in the world. I wanted form and function for the New York Streets and highways; I looked at other wheel manufactures, Work, HRE, BBS and ADV1 but nothing piqued my interest and, when you go to a car show, you see the same style of wheels on the cars. I did not want to be like everyone else,” and we definitely approve of that approach. The 18” Profil 5Ss measure 8.5″ wide up front and 9.5” at the rear and are mounted on a Motorsport Hardware stud conversion kit with 3mm spacers to just fill out those arches a bit better. Visible through the spokes are the bright orange calipers of the bespoke Raptor big brake kit that Gary had made for the car, and not only does it look spectacular, the four-pot calipers front and rear deliver some serious stopping power. 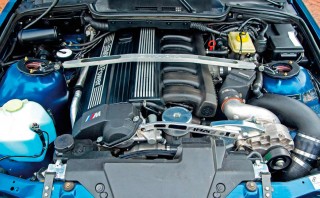 As far as exterior styling is concerned, Gary has barely touched the car, but the few subtle changes he’s made just help to enhance its natural good looks and definitely fit in with his “Adult Performance” styling philosophy. “I try to have all cars built like that because we are no longer inexperienced youths and we strive for perfection,” he explains and we totally get where he’s coming from. He’s fitted a VIS carbon fibre bonnet, which looks fantastic against the Avus paintwork and suits the car’s high performance nature, while the front bumper has been enhanced with a Max Velocity RS lip spoiler, and he’s also added a set of Umnitza Bosch headlights with xenons and angel eyes pre-installed. The interior, on the other hand, has received some special attention in the shape of a retrim and looks stunning as a result “I wanted the Vaders to match the two-tone door panels so I went with the original, dark-coloured outer sections and head rests and Dove Grey leather inserts with double stitching in red and blue, paying homage to BMW. Juan Morales, who is the premier electronics and audio guru, installed the six SPA Technique gauges, Innovate Motorsport XD-16 wideband AFR and then opened up my cluster and installed a K40 Calibre radar detector. They are all hidden when the car is turned off creating that stealth look and numerous people have copied that look, which I am proud of. I also added the Euro steering wheel in perforated leather and Alcantara.” It’s a gorgeous interior and the colour-matched seats just lift it and make it look special and the sort of place you’d gladly spend some time in. 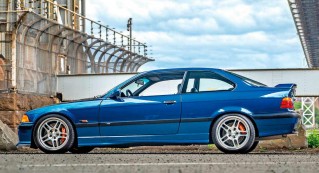 After 11 years of modifying and a complete transformation you might think that Gary has achieved everything he set out to do, but he’s not done yet. “I have some more work to do, but not much. I need to finish the time and maybe build the motor. I would definitely want to do more with the engine to see what it can produce. For a 3.0 it sure can hold its own against the newer, more powerful cars. And the look on the owners’ faces is priceless,” he adds, with a chuckle.

“I would have to say the supercharger, Schrick cams and Metric Mechanic head work are my favourite modifications on the car, because they just make it so lively and it’s reliable. Everyone who is building their turbo cars is always doing repairs but I can say my build has always been turn-key and reliable,” which counts a lot towards the enjoyment of your project. Gary mentions that he would like to own an F10 M5 but we can’t imagine him ever letting go of his E36. After so much time spent together it’s become an extension of him and that’s the sign of a keeper.