We reckon the E38 might just be the best 7 Series. We’d usually precede a statement like that by saying something along the lines of it being controversial but, to be honest, we’re not sure it really is. Let’s run through the timeline: E23, the OG luxury granddaddy, retro-cool for sure, but not so much of a contender these days in absolute terms. The E32 is better, a step up in terms of luxury, it gained those more familiar lines, looking like an XXL E34 with a twist, but maybe a little too old to impress now. We skip the E38 as we’ll chat about that in a moment and proceed to the E65 – a technological powerhouse and no mistake, but while it’s certainly got presence it’s not a great looker plus there’s a lot to go wrong and there was rather too much grey plastic interior trim for a luxury machine along with a horrendous steering wheel. The F01 7 Series really upped its game and, with new Fxx family interior architecture, it felt super-luxurious and upmarket, an awesome wafter and superb machine but, somehow, lacking a little soul and charm, lacking that certain something that just makes you want one. 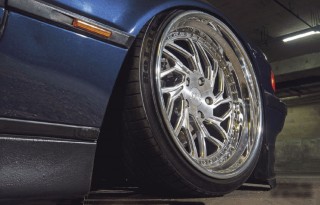 Which brings us back to the E38; it’s still a great-looking car, blessed with a very simple, elegant design, those long flanks, uncluttered, unfussy, clean, all of which means it still looks as good now as it did when it was launched. It’s wide and long, with an effortless sense of presence and luxury; it’s class, it’s importance, it’s success, power, but it’s not vulgar or brash. The cabin is lovely, there are lots of softtouch materials, there’s wood, comfort and quality without any ostentatiousness to it all. Above all, it’s a cheap car that doesn’t look cheap, which is a huge part of the allure and, beyond that, E38s look great with some mods and go from refined business express to all-out bad boy gangster with very little effort. As you can clearly see here.

The appeal of the E38 is therefore undeniable and Matt Hollands, the custodian of this air-ride-equipped machine, will happily talk your ear off about his love for the big Seven and BMs in general. “I’m not entirely sure when and where my interest came from, it was one of those things where I just fell into it,” he tells us. “The first BMW I owned was an E46 318Ci Sport which, at the time being 18 [he’s only 21 now], I thought was the best thing ever and, as with my other cars, one week after getting the car it was dropped on the floor and the whole idea of not modifying this one went out the window,” he laughs. The E46 followed on from a Mk4 Golf and was lowered on coilovers over a set of 17” Rondell splits; “Still to this day one of my biggest regrets was selling the E46 as it was the car which introduced me to a whole new group of people and the car scene as a whole,” he says, but modding is all about moving forward, looking ahead to the next project and selling the E46 meant he could move into something a little more grand.

“I always loved the VIP-style builds and the E38 was one of the cars which was on my watch list for a while,” says Matt as we move on to chat about his 728i. “This one I currently own popped up on my eBay, which I decided to bid on thinking I wouldn’t win it. Lo and behold, I was on the train home from work when my phone went off and it was the owner asking me when I would be picking it up,” he laughs. “At that point I hesitated and thought for a split second whether I should be one of those guys and back out of it or if I should just go for it… as you can guess I went for it and the rest is now history,” he grins and this is one accidental eBay purchase that comes with no regrets.

Luckily for Matt, his new E38 was pretty tidy, especially considering the age of the car, the previous owner having corrected some of the more common faults and tidied the car up giving Matt a good jumping-off point for his new project. “I knew straight away what my plan was with this car as I was planning it for some time, which was to go down the VIP route, it was just a matter of waiting for the right one to come along,” he says and he wasted no time in getting cracking with the mods. Step one was lows, because with its long lines the BMW E38 looks fantastic when dropped and, having always walked the static route, Matt initially opted for a set of E39 coilovers, which gave the Seven the lows it needed. This drop was paired with a set of 20” Style 297s, BMW’s rather funky-looking swept-design five-spokes, and the pairing of futuristic wheel design with classic 7 Series design was an excellent one. But it didn’t last long. “I could never get it low enough with the coilovers on the rear so I eventually decided to buy air suspension for it,” says Matt, and that has most definitely solved the problem although not without causing some problems of its own. “As you’d expect, dropping a 20-year-old car on the floor can come with its problems, which led me to replace every single suspension arm and ball joint,” he says but it was all worth it. He’s opted for a D2 setup, running twin polished tanks and twin Viair compressors, which makes for a tidy install that still leaves plenty of room in that cavernous boot, which is handy because this E38 also happens to be Matt’s daily.

The air-ride install was followed by a set of facelift rear lights, whose jewelled lenses work wonders for the E38’s rear and give it a much cleaner, fresher look, while the front end was treated to an Alpina splitter, which has been further enhanced with the fitment of a lower lip section. This means that when Matt airs out, that splitter/lip combo fills out all the space below the front bumper and leaves room enough for nothing more than the slightest gust of air to squeeze between the top of the ground and the bottom of his car. The Alpina splitter has been joined by a smattering of Alpina trinkets, like the exterior roundels, steering wheel badge and the brakes – which boast chunky four-pot calipers up front as standard – have also been treated to the Alpina script. 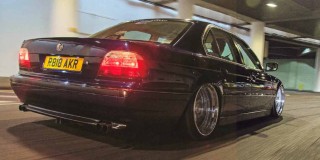 You may have noticed that peeking out from the rear bumper are four exhaust pipes, which form the end of the custom straight-through exhaust system and with BMW being a dab hand at creating some seriously sonorous straight-sixes, we don’t blame Matt for wanting to enjoy a bit more of that soundtrack, especially with the E38’s interior being so well-insulated and hushed. This Seven has some serious bark to it now, the unsilenced setup delivering a seriously meaty soundtrack, one which only serves to enhance this cruiser’s street presence and menace. The final styling touch was those headlights, xenons with LED angel eyes and they look really good, giving that front end even more presence and we also really like the fact that the amber corner lights illuminate with the sidelights, a neat touch.

Let’s swing back to the wheels, because you will have noticed that this 7 Series is no longer riding on the aforementioned Style 297s and is wearing a rather more flashy set of rims, ones which we think really suit this big Seven. “Deciding what wheels to get for the E38 was tough,” says Matt and we’re not surprised as you’re really spoilt for choice with one of these. 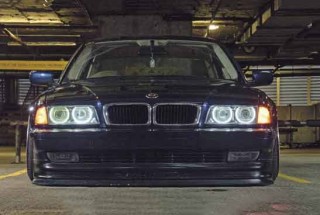 “All along I knew I wanted to get a set of splits for it but, due to budget restrictions, it wasn’t something I could do straight away meaning I settled for the BMW Style 297 wheels, which grew on me over time and I massively regret selling,” he laments, but what he’s ended up with is certainly no downgrade. “With the WCI wheels I currently have they came about just by chance as one of my mates originally ordered them for his 4 Series but WCI only sent him three wheels, which led him to buy another set in the meantime. By the time the fourth wheel rocked up he had no need for them, so I grabbed them off him. Originally I wanted to keep the build OEM and have a set of AC Type IIs but I think the WCIs will do for now,” he says and we reckon they definitely will. The wheels in question are WCI’s JB1s, measuring 19” across, 9.5” wide up front and 10.5” at the rear, with massively-deep polished stepped lips, exposed hardware and brushed silver centres and they look fantastic and work so incredibly well on the E38, tucking into those cavernous arches despite their considerable width; the combo of highly-polished and brushed surfaces is killer and there is a lot to love about these.

Matt has been diligently working on his E38 for two years now and, you will not be surprised to hear, it is far from finished. “Next I am planning on getting a respray, though I am currently undecided on the colour,” he says. “At some point I also want to either get bigger dishes on my current wheels or buy another set which has a deeper dish and add some more negative camber all-round. Once I’ve done that I will probably move on to getting the interior re-trimmed and adding a few other small touches.” The interior is currently completely untouched, offering up a sea of super-soft beige leather to relax in, and the only area that won’t be receiving any mods is the engine. “I decided to leave the engine standard as it’s never going to be a track car but more of a comfortable motorway cruiser,” he says. When it comes to the business of modding, it’s all about making a big impact and Matt has done just that, taking a super-slick 7 Series, seriously upping the sex appeal in just a few key moves and the end result delivers in a big way. 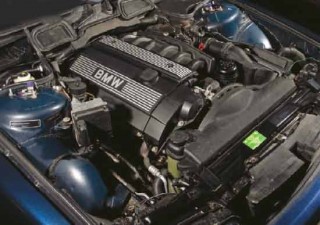 “The front end was treated to an Alpina splitter, which has been further enhanced with the fitment of a lower lip section”