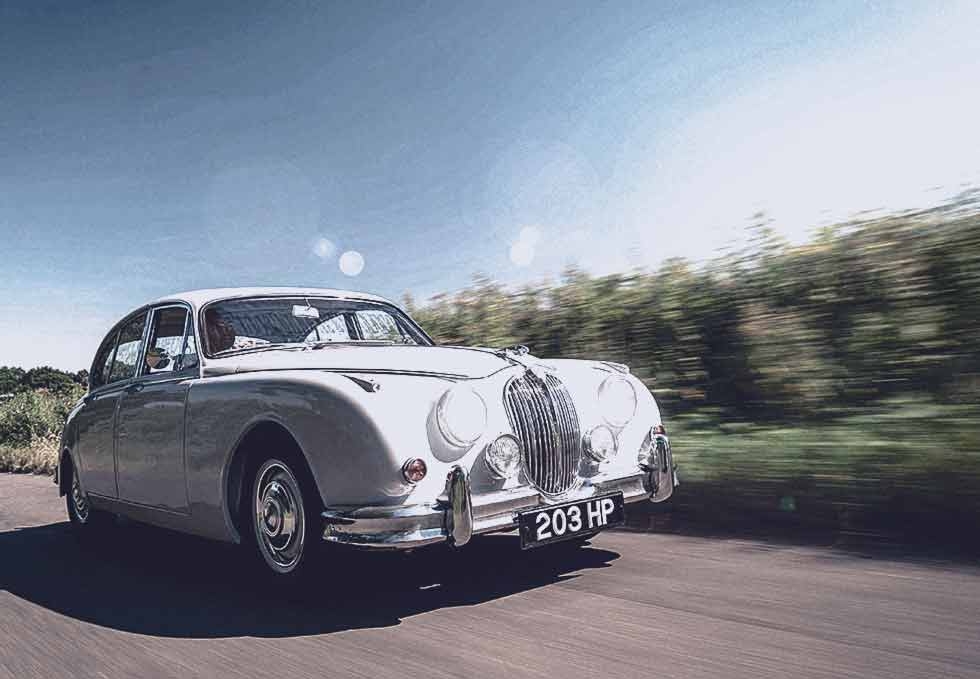 Special MK2 The first 3.8, rescued and restored. Home restoration the first MK2 3.8 Classic Jaguar The first MK2 3.8 home restoration. Restoring a car at home can often be a challenge, but perhaps even more so when the car in questions is the very first Mk2 3.8 – a car once used by engine man Claude Baily. Words: Ian Seabrook. Pics: Chris Frosin.

Classic car restoration can be a somewhat daunting prospect, but Andrew Smith is well versed in a bit of DIY revival, having previously restored Minis, Elfs and Hornets, a Volkswagen Type 2, several MG Midgets and Austin-Healey Sprites and an original Jaguar S-Type. With the S-Type completed, Andrew fancied another Jaguar-shaped challenge, and began scouring the country for a suitable project. “It had been bought by a banger racer, and wasn’t in great shape,” recalls Andrew. “But, the seller thought it was still too good to take around the oval and put it up for sale.” Andrew got the car home and began an assessment. “One of the worst areas was behind the rear seat back. Mice had been nesting here, and the panel was very rotten.”

“Few could know that it is the start of the most powerful Mk2 line, one which cemented Jaguar’s reputation around the world”

So, Andrew decided he needed a spares car. He managed to find one languishing in a barn. “Access was pretty poor,” explains Andrew. “People had been to view the car before, but gave up when they realised how difficult it was to get to the car. It had been crashed and had only been on the road for seven years. I bought it just for the rear seat panel. I had to take the running gear from my project Mk2 just to get it mobile, then drag it down a narrow lane before putting it on a trailer.”

But, as Andrew began to examine the first Mk2, he started to notice how low some of the build numbers were. “Every number seemed to be one or two in a series. Then I noticed it had very early features such as recessed sun visors. I did some digging into the history, and found out that it was the first 3.8 Mk2 built, in the summer of 1959. It was a factory development car, and was used by engine man Claude Baily. It seems different engines were fitted, we think in an attempt to cure oil leaks. The car was left-hand drive originally, but converted by the factory.”

Andrew has since managed to get his hands on the original factory records for the car, which show the work carried out. This work included fitment of the dials from TVC 420, which was the first prototype Mk2 3.8. But, these were different times, and once 203 HP had served its time, it was simply sold off. The intervening years are not that well known, but thankfully, most of the original features have survived.

“…with the historic signifi cance of the car, I thought it better to leave things original.”

Andrew then began the strip-down in earnest, carefully cataloguing all the parts as they were removed in his double garage at home. The body was in a very poor state, and looked even more so after being sandblasted. Panels replaced included the nosecones, front crossmember and crows’ feet, and repairs to the bonnet hinge area, wheelarches front and rear, floors, bootlid sidelight pods and the replacement of all four door skins. Then were was replacement of the rear spring hanger boxes, rear valance, wheel well and boot floor. The usual Mk2 areas then. That rear seat back was finally replaced too. Not that it was too much of a challenge for Andrew. “The S-Type was very similar.

I used a lot of welding wire on both!” To access the underside, Andrew had purchased a roll-over jig, though the first one was not a success. “It felt dangerous with so much weight on it.”

With the bodywork completed, Andrew could turn his attention to paint. There was no question about the colour – it would be the original Pearl Grey. “I was fortunate to have a friend with a paint shop, and he let me use his facilities,” explains Andrew. Then, the build-up could commence, trying to maintain originality. “The only new glass was the windscreen, which was already smashed when I bought it,” says Andrew.

Alongside the bodywork repairs, Andrew had begun rebuilding the mechanical components. Before the strip-down, Andrew did get the engine running, just to see how healthy it was. “It made good oil pressure,” Andrew recalls, “but I decided to strip it anyway. I was glad I did, as it turned out it had three different types of piston fitted! I had the block rebored and the crankshaft reground and then rebuild the engine with new timing chains, pistons, valves and guides.”

Andrew also rebuilt the automatic gearbox. “Graham at G Whitehouse Autos was a huge help,” says Andrew. “He gave me lots of advice and supplied the parts I needed.” Sadly, Andrew only realised that the gearbox needed rebuilding after moving the car on the driveway. “I then discovered that the reverse brake band was defective, so I couldn’t reverse the car back to the garage. I had to drag it back with a Frogeye Sprite!”

With the gearbox rebuilt, there was still an issue. “When I first got the car on the road, there was an annoying vibration, and Graham knew what it was straight away – propshaft balancing.” Was Andrew daunted by rebuilding an automatic gearbox? “Not really,” he says, modestly, “I just followed the steps in the workshop manual.” Before that, Andrew also rebuilt the differential, with its Power-lok limited slip system. The brakes were overhauled, as was the steering, which is not power-assisted. “I did consider upgrades,” admits Andrew, “but with the historic significance of the car, I thought it better to leave things original.”

The right call in this case we feel. The work didn’t present too many challenges, though the rear suspension caused some frustration. “Getting the rear hub off the halfshaft required a 30 ton press after all pullers and even a 15 ton press had failed.”

The interior had survived relatively well, though Andrew went through the electrics with a fine-toothed comb. “I recoloured the leather in the original grey.”

Sitting in some spectacular summer weather, there is little to initially catch the eye regarding the car’s significance. The colour is understated and gives nothing away. Lift the bonnet and the body number can be seen – 001002. The chassis number, 210001, is the first in the series for left-hand drive, the car having been converted by Jaguar at a very early stage, as so often happened with development cars.

Given the importance of the American market, it’s not surprising to learn that many Jaguar’s firsts were LHD, even though many were converted by the factory, right back to the XK120 days. The HP number plate hints at something special, being of the same series as a rather significant E-Type – 9600 HP. HP is, of course, a Coventry code pre-1962, hence is present on a number of historically important Jaguars.

The question of originality is always a tricky one, but I’m pleased that Andrew has kept the original grille badge. It isn’t in great shape, being both crazed and faded from the bright red it should have been, but it is the car’s original badge, and so is worth of preservation. Looking more closely, the engine bay, in particular, is nicely presented, and while it may appear to have the wrong air filter for an early Mk2, this change is included in the original factory report on the car. Perhaps that change of design was even trialled on this car before production. It’s certainly possible. In general, the engine bay is very well presented, complete with the glass screenwash bottle.

The interior is incredibly pleasant too, with gentle creasing on the leather seats reminding you that these are the genuine items, and not some brand new recreations. There’s an optional Radiomobile to provide sounds, if somehow the gentle growl of the XK engine is not sufficient, and the original steering wheel too – so much nicer than a wood-rim replacement. Behind the wheel, I become full of admiration for those who raced these cars new. The large steering wheel needs quite a twirl to go from lock to lock, and a steady hand to maintain a straight course. I’m more used to the power assisted cars which, while certainly lacking feel, tend to have a better ratio and a little more accuracy.

Not that any of this matters, because the important thing here is that Andrew has done his best to try and get the car back to the condition it would have been back in Jaguar’s day. There are no modern additions and it isn’t trying to be something it is not. It instead offers a very charming driving experience, with the whine of the automatic gearbox joined by the burble of the twin-pipe exhaust as you make progress through the countryside, made all the sweeter as you realise that to the masses, this is just another old car. Few could know that it is the start of the most powerful Mk2 line, one which cemented Jaguar’s reputation around the world. This was the fastest production saloon of its day, and it’s still brisk enough for a giggle today.

With work only completed fairly recently, Andrew has had time to reflect on the project. “My final thoughts are that I’m pleased with it, but will probably continue to improve bits as time goes on.” As restoration projects go, it’s certainly a bold one, but we’re very glad that rather than meet its demise without dignity on the oval track, this remarkable car has lived to drive another day.

This Mk2, the first 3.8 built, was used by Claude Baily. Front end required reconstruction. A quintessentially English scene, not many miles from Coventry.

This Mk2 managed to escape the banger track. Radiomobile provides tunes. Dials apparently from a development car. Rather aged, but grille badge is the original. Switch panel overhauled. Seat covers have been retained for originality.

Rear seat back had to be replaced, as well as inner rear wings.

As found, and not very presentable.

After a blasting session – crispy!