When we ask Alexander Bachmann what his favourite thing about his car is, he doesn’t hesitate for a second: “I love the raw finish of the look, it’s so perfectly imperfect,” he grins. And we’re totally on board with that. There’s a magnificent artistic tension to the way the car’s presented; on the one hand it’s clean to a near-concours level, but on the other it shows the weathered patina of ages in its faded period sides stripes, clear signs of everyday use in the slightly crunched front spoiler, hard-won stone chips, and decades of gentle bumper scuffs from Paris-style parking manoeuvres. Rather than over-restoring the car with the aim of achieving a better-than-factory finish, Alexander’s approach respects the history of the 635CSi, acknowledges its years of being used in the way the maker intended, and simply polishes those proud imperfections to a mirror shine. It just works, doesn’t it? 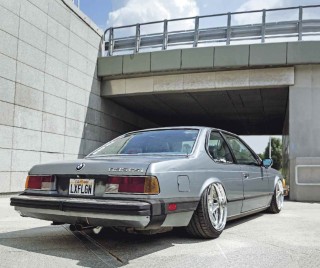 Running a retro car means different things to different people. For some it’s about reliving the honest simplicity of a lost age; of maintaining an old car as a sort of rolling time capsule, keeping every element true to its original state. For others, it’s about using a cool old vehicle as a base to build something thrilling, optimised for modern use in a form that pre-dates moulded plastic bumpers and catalytic converters. Of course, this doesn’t mean that the former are all concours pedants and the latter are bloodthirsty jigsaw-wielders with no sense of heritage – us car geeks can’t be pigeonholed that easily. What it basically comes down to is that we all like driving interesting cars, and we all have different ideas about what happens under the skin. Right? And with that in mind, Alexander’s mission statement here was clear: classic looks, artfully updated, but basically as OEM as possible. With a bit of a twist, naturally…

It’s also interesting to note that we’re finding a lot of USDM style creeping into the European scene these days, which interestingly mirrors the American enthusiasm for obsessively chasing Eurospec parts. It’s a useful zero-sum balance of exchange, really – you’d think someone would get organised and arrange some manner of intercontinental swap shop.

And this E24 is a case in point: whereas BMW fans in the US would probably consider swapping the ungainly bumpers for slimmer Euro items as the first order of business, in this instance it was those protuberances which acted as one of the key attractions for buying the car. “I love the shape and story of this CSi, and the US model is so different and unusual, I just had to have one,” Alex explains.

Our German friend, hailing from the city of Gera, isn’t what you’d consider to be the traditional BMW fan. While a lot of feature car owners we talk to are lifelong, dyed-in- the-wool marque obsessives, Alexander is more of an automotive butterfly. “I’ve basically been interested in all cars since I was a school kid,” he says. “My first car was actually an Alfa Romeo 147! And I’ve had an Audi TT with all the usual mods, a Mk2 VW Golf with a VR6 swap, a supercharged Mk3 Golf VR6, a Mk4 Golf with a TFSI swap… it’s important that every car is unique, and has a story.”

The course of his regular automotive musings led him to the E24 6 Series – and let’s face it, who among us can honestly say they haven’t dreamt of owning one at some point or other? – and the idle pondering turned into an increasingly protracted and extensive search, with Alexander hunting far and wide for just the right 6er to tick his aspirational boxes. Eventually, this one turned up advertised online, presented in very good (but not perfect) condition – a few things to fix up, plus that desirable patina, the decision was made as soon as he saw it.

Finding the right base for this project was crucial for Alexander. Naturally it’s always important to start a project with the best possible car you can afford, but it was especially desirable in this case because he wasn’t simply embarking on some vanity project or low-key daily driver; no, the plan here was to use the car as a promotional tool. You see, 29-yearold Alexander earns his daily crust by selling wheels. The name LX-Felgen will be more familiar to readers in Germany and Austria than to those in the UK, but essentially it’s an enthusiast-run company whose employees are deeply rooted in the show scene, both in Europe and beyond, allowing them to keep their stock list at the cutting edge of styles, trends and fashions. Glancing over their catalogue, you’ll spot scene-hero names like Rotiform, BBS, OZ Racing and Japan Racing, along with slightly more niche brands like TEC, Radi8 and Ispiri. But what’s most interesting is that LX-Felgen have started making their own wheels too, and it’s these that you see showcased on Alexander’s 635 CSi. In fact, since you’re unlikely to be looking at both sides of the car at the same time (unless you have Marvel-like superpowers, or he’s parked it in front of an enormous mirror), he’s taken the opportunity to showcase not one but two fresh LX-Felgen designs. On the driver’s side (and, remember, it’s left-hand drive) you’ll find the LXVT1 style, which looks simple at first glance but is actually impressively complex, combining cues from Alfa Romeo five-hole pepper pots with a murmur of the E34 M5’s throwing stars ghosted in the background. 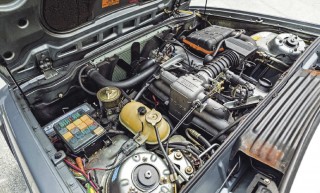 Or to assess it more obliquely, they look a bit like five halved avocados perfectly arranged in a bowl. These are full-fat three-piece splits, measuring 9.5×18” up front and 11×18” at the rear. On the passenger side, you’ll find another pair of three-piece split-rims in exactly the same dimensions (which just makes sense, really), and these are the LXVT2: they have an overt 1980s Ferrari influence, mixing in a little modern 3SDM-style flair along with a frankly mind-numbing arrangement of different depth levels, the brushed-finish centres’ startling complexity offering a perky counterpoint to the slick smoothness of the polished outers. It’s safe to say that we’re massive fans of both designs… in fact it’s hard to pick a favourite, which goes some way to explaining a further logic to choosing to run both at once. Maybe if you ask Alexander nicely he’ll sell you a mix-and-match set?!

While the maturing cliché runs that ‘wheels maketh the car’, it’s important to remember that it’s never as simple as getting the right wheels on the right car and letting those two ingredients do all the talking. The glue that holds the aesthetic together is the stance, the fitment, and Alexander had his work cut out here. Unfortunately, despite the growing popularity of the E24 chassis for resto-mod stance endeavours, it’s not yet quite as simple as picking a setup off the shelf if you want to get one running on premium-quality air-ride. Thankfully he’s pretty chummy with the faces at Wagnair and S-Design Air-Ride, and with enough consideration and conversation thrown at the issue, our keen protagonist arrived at his solution.

“I used a set of universal struts from Air Lift, modifying them to fit the E24 chassis and shortening the rears,” Alexander explains. “It’s running V2 digital management, and I had a set of control arms custom-made to get some negative camber at the front. The arches have been rolled to get the wheels sitting as wide as possible too!” That’s certainly done the trick, as the road-going E24 was never designed to have 11”-wide rims squeezed under its rear arches, and the on-point fitment here carries off the aggressive look perfectly without taking things a step too far and ending up looking all Hot Wheels. “It was clear to me how the car should look from the very beginning,” says Alexander. “It was just a feeling.” This was no doubt informed by the originality of the car. The factory interior of the 635CSi is a rather wonderful place to be, with its supportive and generously-bolstered leather seats, multi-level dash with its oh-so-’80s angles and KITT-like warning light arrangements, and of course the driver-oriented design that angles the dash centre to that side of the car. Alexander saw no reason to disturb this purity, opting simply to sympathetically restore the interior and add a wood-rim Nardi wheel and M gear knob. The drivetrain remains similarly untouched, just refreshed, although he has added a custom stainless exhaust, because such things are essential. But the overarching win of this build is the weathered-yet-faultless exterior – it wears its years so well, and those gawky USDM bumpers are so fabulously unfashionable that they somehow go full circle and make the thing even more awesome. 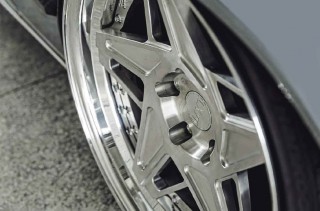 “I might build a turbo 3.5-litre engine for the car,” he ponders, “although I have just bought a Ford Crown Vic and fitted air-ride to that…” So that’s the uniqueness itch once again scratched, at least for the time being. The E24 can remain in this state, used but loved, building on its own personal heritage to forge its path into the future, so perfectly imperfect.

THANKS Thanks to all the guys who helped me every time: Christian Wagner (Wagnair), Flo Petschauer (S-Design Air Ride), Marcel Jungmann (Cult Car Wrapping) and Tuan Truon

“I love the shape and story of this CSi, and the US model is so different and unusual, I just had to have one”