The definition of a sleeper is generally performance related. Lots of power, not much visual impact. But I’d like to posit there’s another definition. One where almost the reverse is true. Lots of visual impact, but in a style that makes you think it’s all flash, no cash; only when you look deeper do you discover nothing could be further from the truth. Melbourne, Australia-based Michael Hack’s 1988 E30 325i Touring fits into the latter definition. 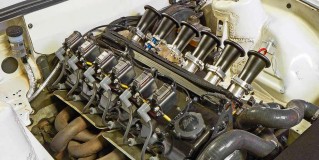 As you can see from the photos, at first glance, Michael’s Touring looks like many other stanced E30s you see these days; slammed on bags, shiny wheels and seemingly not much else. It’s only when you get closer that you see the Alpina steering wheel, Recaro LS seats and telltale Microtech LTC dash logger that suggest it may not just be wheels and a drop.

And so it proves, although you only get the full story when Michael lifts up the bonnet. Or removes it entirely, as he’s wont to do at shows. Then you see that any assumptions you may have had until that point were likely wrong. Because while it may not be the fastest E30 on the planet, the RHD Engineering ITBs, Raceland manifolds, 284° Schrick cam and countless other mods mean this M20 certainly has the bite to match the exterior’s bark.

Right now, some might wonder why go to all this trouble when stance cars are generally only used to look good.

And trouble it was. Due to the usual Bad Workshop Experience™, it took 18 months between Michael buying the ITBs, cam and other supporting parts and everything actually being fitted and tuned. Even then, it ran badly enough that after this shoot, he had to swap to a Haltech ECU and get it re-tuned elsewhere. 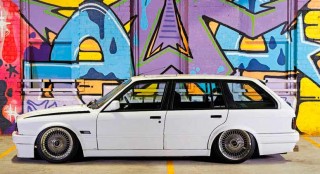 Well, aesthetically-pleasing as the ITBs and exhaust manifolds are, they are there for a reason – Michael used to be a fairly hardcore racer, running a highly-tuned Civic Coupe track/street car capable of embarrassing many a turbocharged AWD beast in its day, and while he no longer hits the track much these days due to the cost and a series of mechanicals that eventually saw him part out that Civic, he’s never likely to give up racing entirely. Hence, go-faster bits.

Michael says the ITBs in particular are the result of his track years, as he ran them on his circuit car. “Back when I was into my Hondas, my race car had ITBs, and the sound was intoxicating. I always remember that feeling.” Thus, when he saw RHD Engineering in Sydney was doing a set for the M20, he thought, “I’d love to get that feeling back… with the look and the sound and the uniqueness of ITBs.” Indeed, while they’ve sometimes been a lot of hassle to achieve, those themes of looks and uniqueness, combined with a healthy dose of performance, run throughout the build. 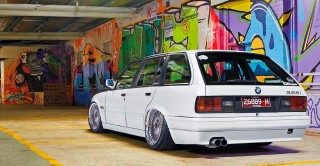 Take the Work Emitz wheels, for example. While a purely aesthetic touch, they’re almost never seen on E30s and are only there because of a chance discovery. “They’re not overly difficult to find, but they’re most common in the five-stud pattern, as they’re a JDM wheel,” Michael says. “If you’re going to find them, they’re going to be in a 5×114 fitment and they’ll be in 18-19” sizes, as they’re usually for the bigger VIP-style Japanese cars.” However, a random search one day on Yahoo Auctions Japan revealed this set in the less common 4×100/17” combination, complete with super-rare low offsets of ET22 front and ET23 rear – perfect for the E30. “4×100 and 17″ wheels are usually in Honda-spec, with real high offsets, so to find a set of these wheels in low offsets in 4×100, 17”… I couldn’t really say no,” Michael laughs.

The Emitz rollers are perfectly framed by the E30’s classic lines thanks to another unique part of the build that helps with both looks and speed – an American- sourced, Australian built and owner-fitted Air Lift Performance suspension system, complete with home-made cover for the air-ride tank and twin Viair compressors. Having been ‘defected’ by the local police (forced to return your car to legal levels of modification) for running essentially a race car on the road with his Civic, Michael had no intentions of falling foul of them again, so built up the cover to hide the air system with some MDF, automotive carpet and computer fans to keep the compressors cool. As for the suspension itself, Michael ordered only the bare necessities from the US and the rest locally due to Australia’s poor US Dollar exchange rates, and was able to fit the whole lot himself, having built up significant mechanical skills over years of working on his Civic.

Being performance-oriented bags, Michael believes he should have no problem abusing them on the track, either. “I do have plans to go back to the track, and there’s a good bunch of guys I go to the track with, and it’s just heaps of fun. I’m not out there as a competitor – I’m not going out there to put down the best time possible – well, obviously I am, but not competitively. Ether way, the car should and will handle that perfectly.” Michael says the best part of having the car on air is that it gives him options. “The air bags give me the freedom to drive it down the street to my friend’s house at legal height… or I can have it at a show, slammed and looking good. On a car cruise, I can maybe have it at a middle height. Bags give you that freedom, and at my age now, I can’t really afford to have the car taken off the road and defected, because it would just be a huge headache that I can’t afford.” 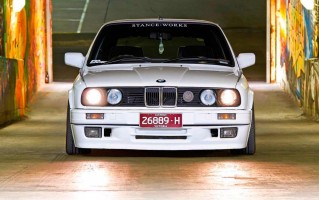 One other rare touch Michael was personally responsible for (and caused yet more problems initially) was the wire tuck. Coming from his background in the Honda scene, where such a mod is common, Michael felt it would be a good way of making his car stand out Unfortunately, he didn’t bank on it being so time consuming. “What I thought might take me maybe a month ended up taking three months, and I think I remember I was up to about 450 solders from the time I cut my first wire to restarting the car.” Thankfully things did start first time, which is possibly a combination of good luck and Michael’s skills as an electrician, his day job.

Given they’re relatively common on the UK scene, what might surprise some readers is that even Michael’s choice of an E30 Touring came down to a desire to stand out. Before this, he had an E30 318iS Coupe (he likes E30s partly because of “that old-school, boxy shape”), but given they’re relatively common in Australia, Michael started looking for something never officially imported Down Under: the E30 Touring. “I always knew there was a wagon version, but we never got it in Australia, so I always thought it was a bit out of reach,” he says. Thankfully, six months after problems with a housing company meant the return of his house deposit, Michael came across this ex-UK example on a local car sales site, and the unexpected cash in his pocket made the decision easy. “I didn’t really have the need for another car, but I thought the opportunity’s not really going to pop-up too often, so gave the guy a call, and within the next week I was flying to Sydney and then driving the car back down to Melbourne.” 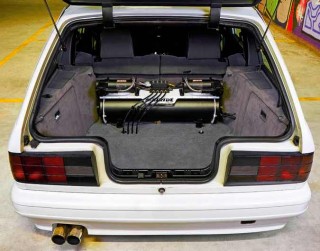 Sadly though, it wasn’t quite as simple as that. Despite assurances the freshly- imported vehicle would have the necessary engineering and paperwork to comply it with Australian regulations, when he got to Sydney, Michael found the certification didn’t exist, so he had to take a risk in driving an illegal car down to Melbourne to get it certified and registered there. Things got worse after that, too. The Melbourne shop soon discovered the side intrusion bars (a necessary fitment in Australia) were only bonded in, not welded, and were thus not only illegal, but useless from a safety point of view. Unsurprisingly, the Sydney workshop wasn’t helpful in trying to sort out its shoddy work either, even going so far as to suggest he drive it back up and get it certified there without rectifying the problem, so Michael had to pay to get the whole thing done properly in Melbourne.

Eventually, though, he did get it on the road and started down the path documented here. Once he cleans up the rest of the brackets exposed by the wire tuck, re-paints the engine bay and possibly matches the rear seat material to the front Recaros, he may even call it finished. “Everyone just wants to have that complete car, so eventually, that’ll all happen, I guess.” Has it been worth it? Seeing the smile on his face now it’s done, we’d say yes.

Recaro LS “Confetti” seats & are the interior highlight. Accuair e-Level controller for easy height adjustment. “I always knew there was a wagon version of the E30, but we never got it in Australia, so I always thought it was a bit out of reach” “The RHD Engineering ITBs, Raceland manifolds, 284° Schrick cam and other mods mean this M20 has the bite to match the exterior’s bark”