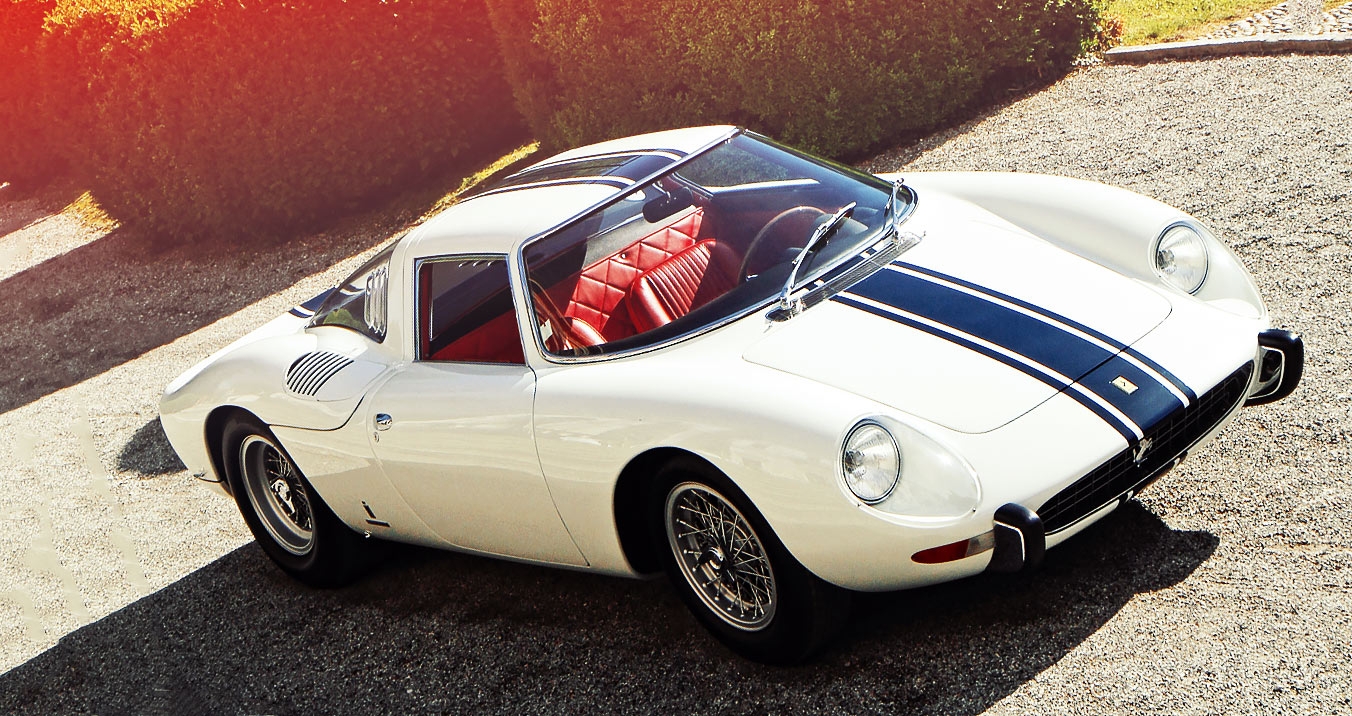 All the 250s. No other motoring dynasty ever bore so many legends of road and track. Glen Waddington is your guide, from 1952 to 1965. On-road in Ferrari’s most desirable convertible – plus the other 250s and what powered them.

One built First to wear the badge, though outwardly it was identical to the existing 225 S. Only this time it was powered by the brand new 3.0-litre evolution of Gioachino Colombo’s already venerable V12 – of which you can read much more in John Simister’s story. It made its debut on the Mille Miglia, one among 27 Ferraris taking part in 1952, pitted against the class of the field: Mercedes-Benz was expecting a victory with one of its three 300SL Gullwings, driven by Caracciola, Lang and Kling. Yet while Ferrari considered the Mille Miglia to be the perfect test for its new engine, its driver Giovanni Bracco was gunning for glory. By the halfway point, somewhat adrift of the Germans’ power on the long straights of the Adriatic, Bracco’s 250 was third. But the strength of that V12 and the nimbleness of the compact Vignale-bodied 250 S – which weighed only 850kg – came to tell in the twists of the fabled Futa and Raticosa passes, and Ferrari went on to claim its fifth consecutive Mille Miglia win. The legend had begun.

Named to commemorate Ferrari’s domination of the Mille Miglia, the 250 MM made its debut on the 1953 Giro di Sicilia, driven by privateer Paolo Marzotto to second place behind 340 MM driver Gigi Villoresi – who went on to win that year’s Monza Grand Prix in a 250 MM. While the 250 S had merely been a prototype, the MM featured a new chassis based around the 3.0-litre V12, clad by Pininfarina (coupés) and Vignale (barchettas), the styling of which set the scene for the ever-growing 250 family that followed.

It’s here that the Ferrari road car legend truly begins. Yes, we’ve all heard that Enzo Ferrari built ‘production’ cars only to fund his competition exploits, but the 250 Europa is the foundation of the company we know today – much as Aston Martin owes its fortune to the DB2. So while the Inter coupés of previous iterations with smaller Colombo V12s had been thinly disguised racers with road-car bodies, the Europa was conceived as a gentleman’s gran turismo. It was launched at the 1953 Paris Salon de l’Automobile on a new 2800mm wheelbase – and, uniquely among 250s, was powered not by the Colombo engine but by a small-capacity version of the Lampredi Formula 1 V12.

Take the bodywork of a four-cylinder racer (in this case the 500 Mondial and the 750 Monza), fit Colombo’s V12 and go endurance racing. That was the recipe but, despite a promising start when Trintignant and Piotti won the 12 Hours of Hyères, the 250 Monza’s competition career was largely without success.

Another milestone: this was the first appearance of the ‘GT’ label on a Ferrari, and the first Ferrari to enter ‘standardised’ production – albeit in tiny numbers, relatively speaking. Despite outward similarity to the previous year’s Europa, the engine this time was Colombo’s – its first use in a car developed first and foremost for the road. The elegance of the various bodies available (though mostly by Pinin Farina) found favour among a descerning clientele. With 220bhp on offer and kerbweight little above a tonne, this was a serious sports car that consolidated the legend of the 250 GT.

With the recipe for the 250 GT established, Enzo decided it was time to send it racing. Scaglietti interpreted the metalwork over a 2600mm wheelbase, taking a stylistic leap that moved further towards the accepted ideal of a Ferrari GT, and the 250 GT Competizione became one of the most successful sportsracers of the mid-1950s, winning on circuits, roads and hillclimbs around the world. It was given the ‘Tour de France’ epithet in honour of Ferrari’s victories on the event, and a short-wheelbase (2400mm) version (the 250 GT Interim; a further seven built) was developed in time for the 1959 Le Mans 24 Hours – which would lead to a new iconic version of the 250 GT…

Styled by Pinin Farina and presented at Geneva, this 250 GT gained its name when ex-Ghia coachbuilder Mario Boano was offered the job of building it (all coupés bar one convertible): Pinin Farina simply didn’t have the capacity. When Fiat recruited Boano, that job passed to his son-in-law Ezio Ellena, and production continued with minor styling alterations.

Pinin Farina took elements of the futuristic streamliner styling of the 410 Superfast and Superamerica and created a soft-top GT that would become one of the most coveted Ferraris of its era. Following its maiden appearance at the 1957 Geneva show, one-offs were gradually superseded by a small-run production series. Glamour had arrived in the 250’s world.

If Pinin Farina’s Cabriolet was about film star sophistication, the California Spyder was altogether more assertive. Designed in response to encouragement from American importer Luigi Chinetti to build a convertible specifically for the American market, the California’s Scaglietti bodywork was deliberately more angular and sporting, though it initially shared the same wheelbase as the Pinin Farina – and, more tellingly, the Tour de France. It also shared the latter’s engine, the result being a convertible for the racetrack as much as for the road. A developed version was launched at Geneva in 1960, its wheelbase shortened to the same 2400mm as the GT SWB racer’s, and powered by the latest V12, which screamed to a power crescendo of 280bhp at 7000rpm. Deservedly among the most collectable Ferraris.

The Testa Rossa – so-named because of its red-painted cylinder heads – carried on from the four-cylinder 500 TR that preceded it, but with a longer wheelbase and bonnet, under which was the most powerful Colombo V12 thus far: 300bhp at 7000rpm, and a kerbweight of 800kg, for a top speed of 170mph. Hill and Collins won the ’1958 Buenos Aires 1000km and the Sebring 12 Hours, Musso and Gendebien won the Targa Florio, and Gendebien (this time with Hill) won the Le Mans 24 Hours. Aston Martin’s DBR1 took the 1959 Sports Car Championship but the TR fought back in 1960, with victories at Le Mans and Buenos Aires again, then in 1961 at Sebring and Pescara, and then again at Sebring and Le Mans in 1962. One of the most successful cars in Ferrari’s competition history.

There had been Pinin Farina coupés before, built mainly as one-offs during production of the Cabriolet, but this car marked yet another 250 watershed: not a competition car, not a glamorous Spider. No, this was a car designed along classical lines and built in proper volume, with few variations, in a process that was deliberately standardised; a moneymaker, in other words. Still a special machine, with a 240bhp V12, but the 2600mm wheelbase and 1230kg kerbweight made it a civilised tourer rather than a raw road-racer.

Rather like the Coupé Pinin Farina, but this time a soft-top. The second series, built along semi-industrialised lines, was soberly attractive with an elegant leather-lined interior, and definitely more boulevardier than sports roadster.

Another winner, which grew from the 250 Interim at the end of Tour de France production. Scaglietti’s iconic body was more modern, compact and fabulously assertive-looking, all shrink-wrapped over a 2400mm wheelbase. And another milestone: famously conservative Enzo Ferrari finally agreed to fit disc brakes all-round, though there was still a leaf-sprung live axle hanging out at the back. Aluminium-bodied competition cars weighed just 960kg, the steel Lusso (complete with a more luxuriously finished interior) weighed 1100kg, and power outputs varied from 240bhp to 280bhp – always produced at 7000rpm. Race victories ensued en masse, the Tour de France, Monza Intereuropa Cup and 1961 Tourist Trophy among them.

Another series-production Ferrari, but this time in rather more serious numbers – and also featuring rear seats for the first time. Same-again 2600mm wheelbase, though with the engine moved 200mm forwards to make more room inside, and powered by a 240bhp dry-sump V12. Once the bargain of the 250 world, and it probably still is, though the days of buying a ’60s Ferrari for a Northerner’s mortgage are long gone.

The ultimate. Not just the ultimate 250, but still the ultimate Ferrari if you value visceral noise, tingling feedback and old-fashioned handling over grip. The ultimate in market values, too. In fact, probably the ultimate sports car, full-stop. OK, eulogising over, now to the facts: 39 cars built in two series (36 with the original body style from 1962 to 1963; three second-generation cars in 1964 and four of the originals rebodied) – and chassis numbers applied out of sequence and with gaps in order to fool the FIA that the full requirement of 100 cars had been built! Designed by Giotto Bizzarrini, Mauro Forghieri and Sergio Scaglietti. When new, the cars could only be bought by people who had been approved by Enzo Ferrari himself. Such a reliable race-winner, designed in response to new regulations that meant points would be awarded only to GT cars rather than prototypes: tellingly, the ‘O’ stands for omologato. Underpinnings from the 250 SWB, engine from the 250 TR, aerodynamically purposeful (and wind-tunnel-tested) body complete with iconic flaps in the nose that could be opened for cooling air in sprints or closed for sleekness in long-distance races. The result? Two Tourist Trophy victories, two in the Tour de France, class wins in nearly every endurance race of the era, class winner of the FIA GT Championship in 1962, ’1963 and ’1964 – it was one of the last front-engined cars to dominate the racing scene. And every single original car still exists. The Ferrari 250 GTO undoubtedly contributed the most to Ferrari’s reputation as the ultimate sports car builder.

Unveiled at the Paris Salon in 1962 and, in effect, the roadgoing version of the GTO. The Lusso (Italian for ‘luxury’) is widely regarded as the prettiest of all the 250s: think of it as the culmination of all Pininfarina had learnt designing Ferrari GTs during the 1950s. An elegant car, with a leather-lined interior yet a kerbweight as low as 1020kg (though extras could swell that to 1310kg), so it was light enough for the 250bhp triple-carb V12 to give it serious performance too. Never designed to race, yet that couldn’t stop it: a Lusso finished 13th overall on the 1964 Targa Florio.

The first mid-engined 250. New prototype racer, taking the chassis of the 246 SP but with a longer wheelbase – fitted with the 250 TR’s 3.0-litre V12. Won at Le Mans, Sebring and the Nürburgring first time out.

Successor to the GTO yet with more in common with the 250 P: Enzo Ferrari sought to homologate his endurance prototype as a GT car, in effect creating a ‘roadgoing’ 250 P. Only the first two 250 LMs were fitted with the 3.0-litre V12, the rest being powered by a 3.3. The 250 LM was denied GT status, forcing it to compete against other prototypes, which it did with success: victories at Reims, Spa and – most significantly – Le Mans followed.