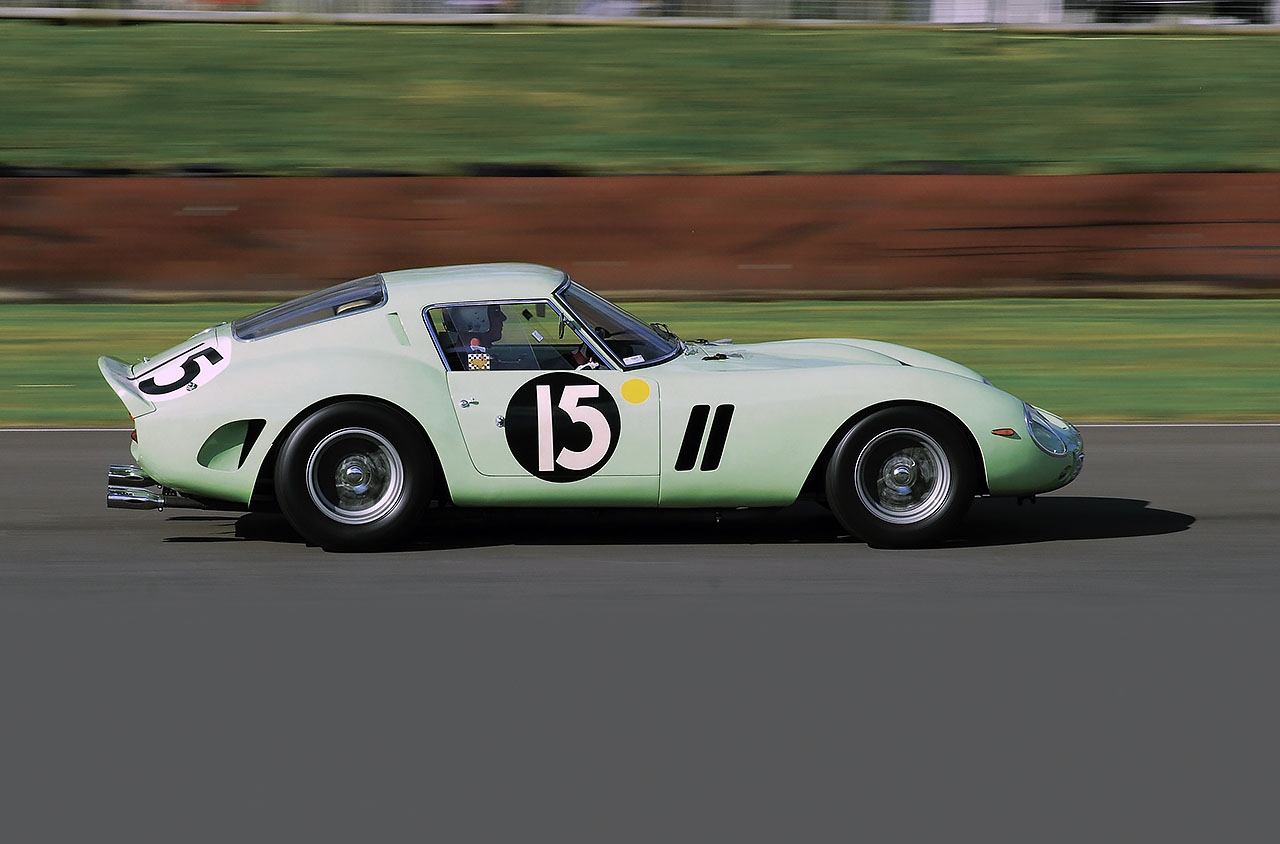 The two big questions everyone asks about the 250 GTO are, “Is it worth the money? What’s it like to drive?” In answer to these questions, firstly it drives like a cross between a Mk 1 Escort Twin-Cam and a competition lightweight Jaguar E-Type. It has the rorty and sideways stability of the former blended with the balance and pace of the latter. Secondly, is it worth the money? That depends on how much money you have. The 250 GTO has confused the issue by driving into the hazy world of fine art. If you are burdened with whopping great wads of cash, there is only so much enjoyment to be gained from counting it.

ABOVE: The green GTO has had several outings at Goodwood. Stirling Moss did eventually get to drive the Ferrari that was originally intended for him.

BEAUTY AND THE BEAST

Like a pilot walking round his aircraft for the compulsory ‘look-see’, I take in the beauty of the beast. Uncommonly resplendent in council house green, I notice the tartan stripe on the bonnet, the Modena number plate, the numerous slots and vents and four big ‘extractor’ tail pipes. And just like an old aircraft, you see endless evidence of loving human input in its engineering. You just can’t help liking it. Underneath there has been some attempt to speed up the underbody air flow with an aluminium under tray. Its beautiful Bizzarrini proportions are reminiscent of a perfect wild animal. The view from the driver’s seat is reminiscent of the Jaguar E-Type but far more curvaceous, dominated by the three humps which give clearance to the Borranis and stack of six ram-piped twin-choke Webers. 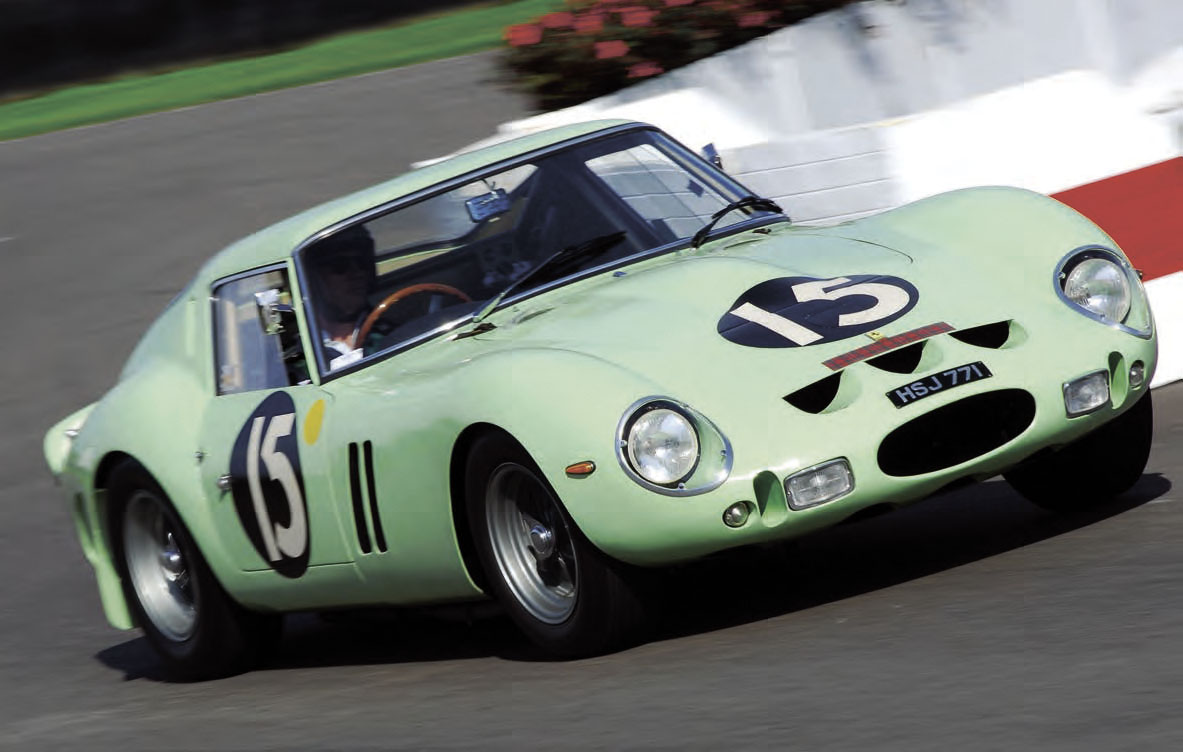 The interior looks and feels like a competition car. Lots of silver paintwork inside lightens up the cabin. The dash has spaceframe/roll cage tubing visibly going through it, also painted silver. Business-like fuse boxes and neat wiring are on show ahead of the passenger. All switches are clearly labelled – essential on a car you don’t use every day. There is a Ferrari metal gear lever gate on the floor with a high alloy gear knob. Your knees fight for the same place as the classic, flat, woodrim steering wheel with prancing horse horn-push. The sitting position is typical of old Italian sportscars, i.e. horrible, but you do get used to it. A dished wheel would transform this. Low-back race seats in blue with modern road-going lapdiagonal seat belts are fitted. You get a big tacho and no speedo but there is a list of speeds against rpm on ‘dymo’ tape. As you open a door, you immediately notice its light weight. At about 880kg, the GTO’s 280bhp at 7500rpm is enough to give a 0-60 time of six seconds. Top speed depends on the gearing option chosen, anything from 140-180mph is possible. 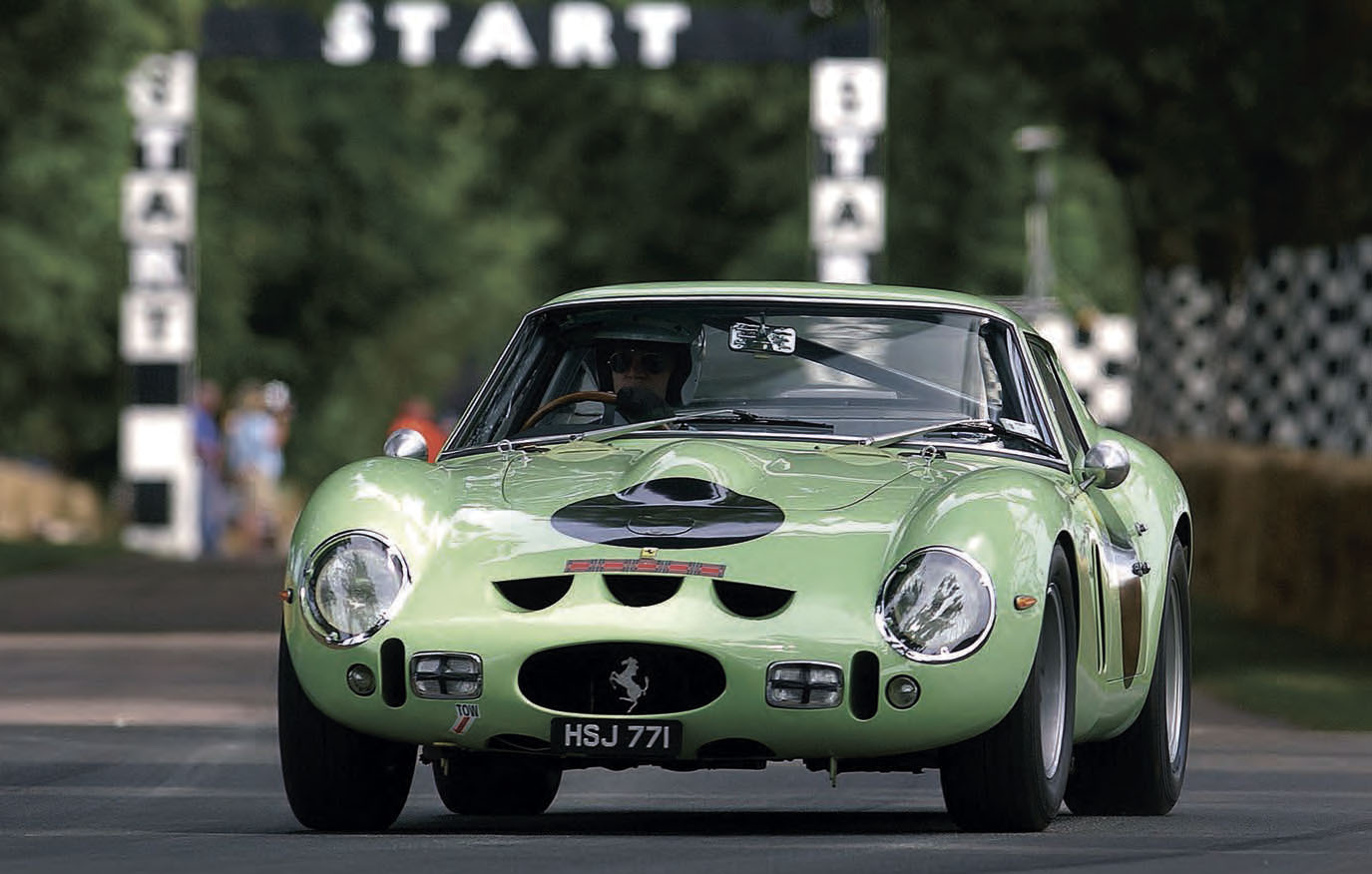 With orders to shoot me should I survive wrecking the car on the fast tree-lined track, I turned and pushed the key to fire up the rorty ram-piped motor and got to grips with the controls. Brake pedal feels rock solid. Clutch pedal has nice light easy action with a long throw. Throttle pedal is well placed for toe-heel down changes. Steering has 2.75 turns lock to lock which gives quick steering with no power assistance. The steering feels light for most occasions but loads up heavily when cornering hard; the price you used to pay for high castor angles which help straight line stability. 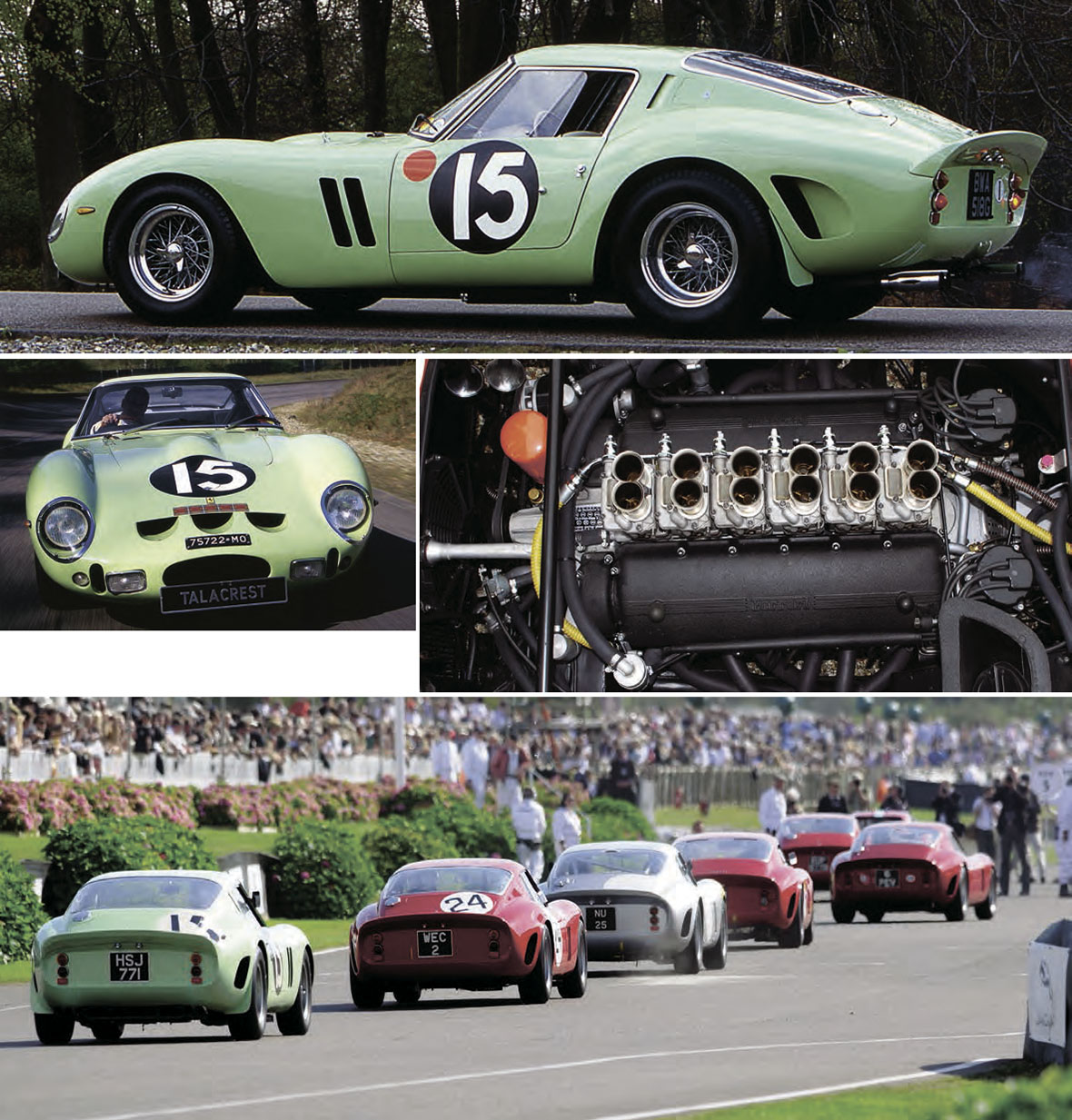 Pleasantly jiggly at low speeds, the suspension is stable enough at high speeds considering its age. It lacks the torque and low down grunt of its great rival – the Jaguar E-type – but just about makes up for it with a screaming ‘top end’ and better high speed stability.

The E-Type’s high speed lift limited its grip in fast sweepers and the interior mirrors had to be re-set each time you went over 100mph. The GTO’s low mounted, dry-sumped, alloy V12 gave it a lower centre of gravity than its narrower-tracked rival. At 120mph the GTO stayed almost level, its lift was less of a problem. Innes Ireland liked the GTO because, “It didn’t do anything funny”. It is still fitted with old-fashioned Dunlop 15-inch racing tyres on 6- and 7-inch Borrani wires with triple-eared knock-ons. 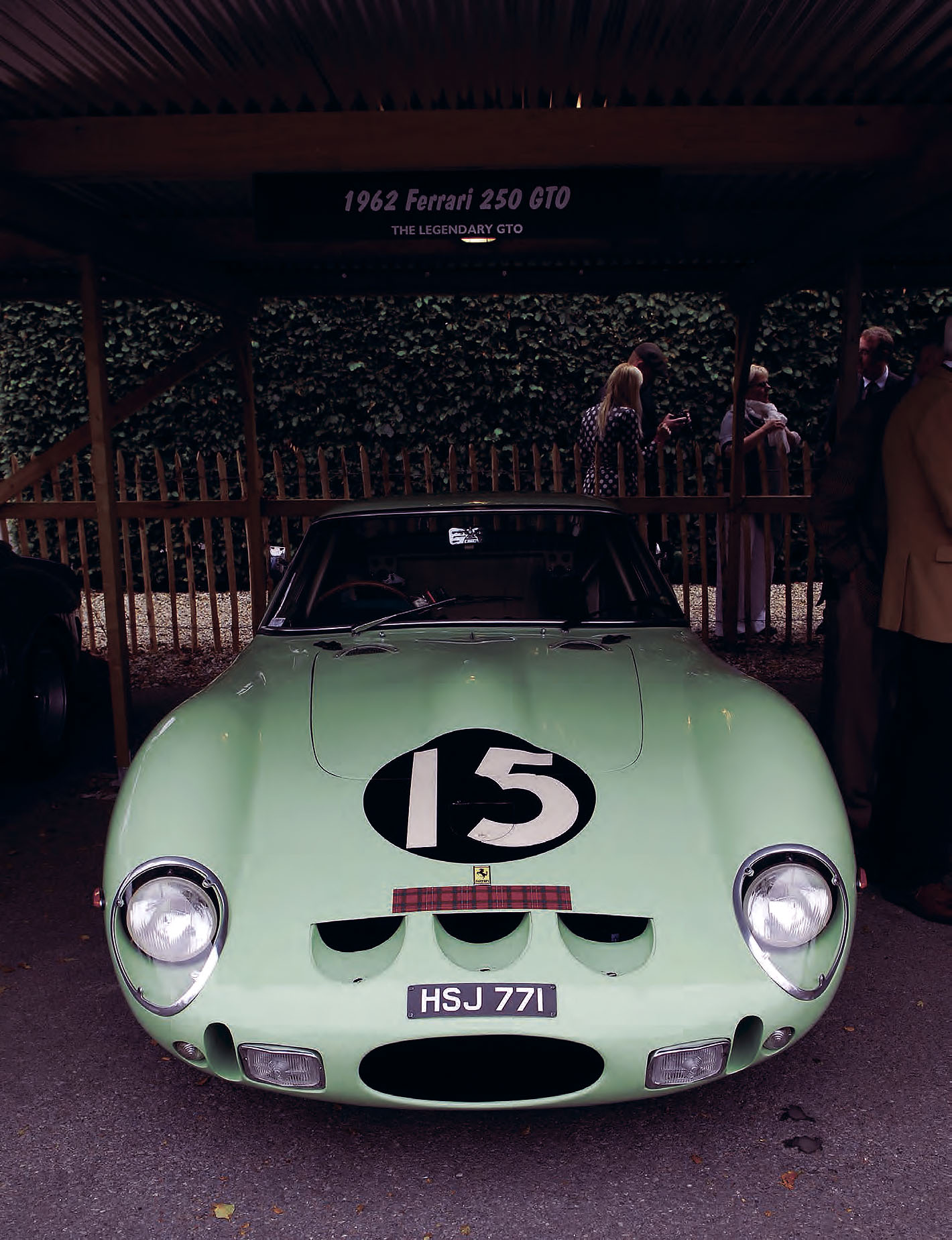 The GTO is so communicative. Roll and pitch are well damped, although running straight and level, some vagueness is present in the steering. You are aware of its light weight as the chassis and alloy body react quickly to any bumps. Racer Mike Salmon referred to it as “a ballet dancer on four wheels”. Gear change from the 5-speeder is easy, nothing like the switchlike shift of a modern car but better than ’70s and ’80s Ferraris. The car’s greatest fault is in its ventilation system. With zero heat insulation you’d soon fry. In their day each car was different and various half-hearted attempts were made to cool the occupants. I’m sure that with a little thought this problem could be overcome.

At low speed the noise from the 3-litre V12 is fussy, but on full song it is fantastic – from an era before we stupidly surrendered to rule-making enthusiasts and bureaucratic kill-joys. Open the throttle too much at low rpm and the motor gasps in complaint – no engine management here. Better to feed it slowly and only floor it when the tacho is past 3000rpm. From 5000 to 7500 rpm it flies. But that rock solid un-servoed brake pedal presents problems. Several times, I’d find myself going into the fast turns far too quickly. I kept overlooking the massive effort required to slow the car.

ABOVE: Roberto Giordanelli’s test drive was back in 1997. Talacrest have since brokered eight Ferrari 250 GTOs.

Having dabbed the pedal, i.e. done my bit, the GTO was still travelling too quickly as I turned in. Approaching the car’s cornering limits, the steering would really load up enormously, understeering initially, before the tail came out to relieve it. Slow in, fast out, was better. The old-fashioned, well-located, Watt linked live axle set-up means zero rear wheel camber change as the GTO yawed and flicked out. This ‘constant’ together with a limited slip differential and almost 50/50 weight distribution gives the GTO (as with the Escort Twin- Cam) the capability of going beyond ‘the limit’ and living again. Cars that turn ugly at the limit tame drivers into caution and mediocrity. The 250 GTO driver smiles in a slide instead of grimacing.

It is easy to get blasé in this job and sometimes it’s no bad thing. Driving it as irreverently as its maker intended, the GTO was a delight. It inspired so much confidence that I hurtled this automotive work of art round the track as if it were a disposable old club-racer. 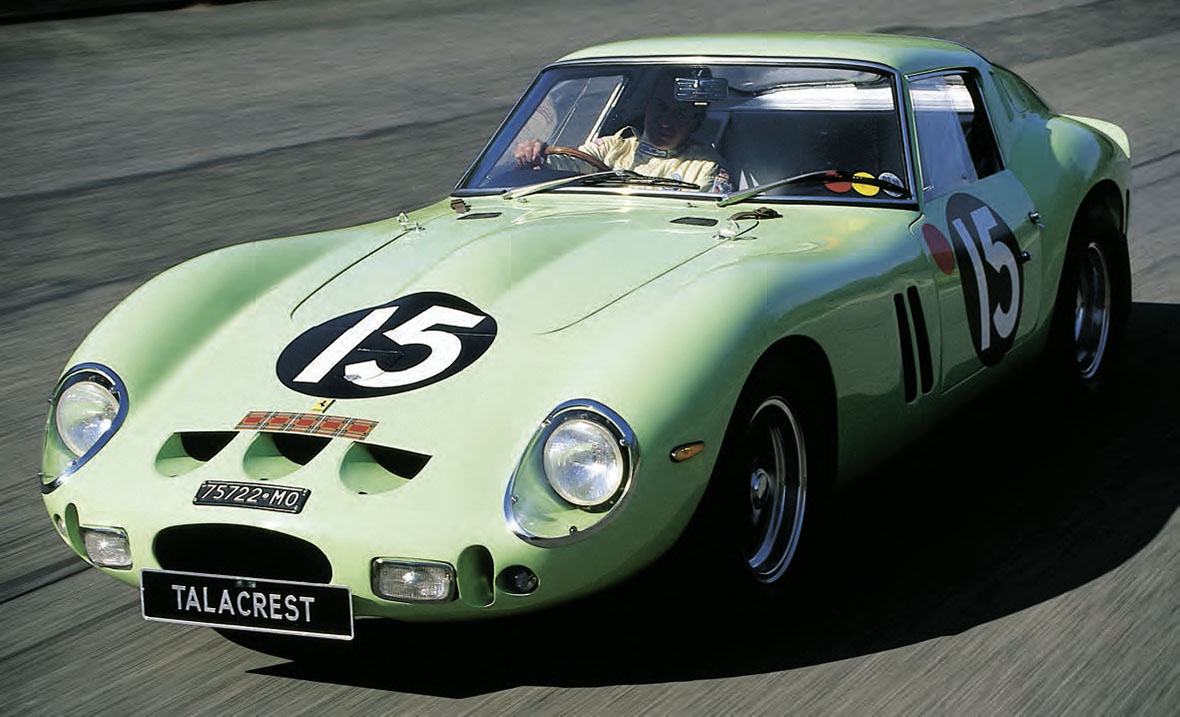 Nevertheless, I did feel as if I was drawing a moustache on the face of the Mona Lisa. Other cars have more grip. Other cars are faster and better at many things but this car is fun. Fun by the bucket-load and it has more history than a car park full of other ‘classics’. When you switch off the motor, it stops immediately. Suddenly all the noise and fuss vanishes leaving an audio void of surreal proportions for the driver to contemplate what he has experienced.

Stirling Moss and the GTO

Stirling Moss was invited to Monza in the week before the 1961 Italian GP to test a new car Ferrari was developing. This was a new GT car which was being hatched by Bizzarrini and others. The 250 SWB was a good car but no great shakes as far as aerodynamics were concerned, so a lot of activity had been centred on the shape of the nose of the new car which was gradually taking on what was to become the classic GTO ‘droop snoot’. In fact, around the factory, this prototype hack, which was believed to have been based on SWB 2053 GT, was known as the anteater. Moss immediately realised the potential of the car and, later in 1961, got down to some serious discussion with Enzo concerning their combined futures.

Meanwhile, Ferrari had not been putting all his efforts into just one car, as Pininfarina had been asked to produce something on the SWB chassis incorporating their own ideas on the shape of the body. The car featured here was the result. It is based on SWB chassis 2643 GT and, since they had recently produced the much-acclaimed Superamerica with smooth nose and tail, Pininfarina decided that a slightly modified version of this would be just the thing. Thus the car looks like a 400SA, but is shorter and has larger rear wheel arches to accommodate racing tyres. That this was a serious car can be seen by the fitment of a full Testa Rossa 3-litre engine and its entry for the 1961 Le Mans 24 hours.

Considering the near hysteria that accompanies anything about the 250 GTO nowadays, it is ironic to note that virtually no mention of 2643 was made in any British contemporary report of the race. Little did anyone know what was to come out of it. At first it would seem that the car was referred to as a 250GT Speciale but, like so many cars since, it took on a retrospective title, that of ‘Sperimentale’. The car weighed only 952kg and was made of alloy, so it was expected to put up a good performance.

The car showed great potential at Le Mans and hung around 10th place for much of the race before climbing to 8th and suffering retirement at 04.45 at White House corner with severe engine maladies. The car was painted metallic blue and it was retired to the factory where it was used for exhaustive GTO tests. The search for effective aerodynamics had been helped by the use of a dry-sump engine, thus enabling the lowering of the bonnet line.

The paths of Stirling Moss and 2643 were coming ever closer. During the autumn of 1961. Enzo’s conversations with Moss and his manager Ken Gregory had reached the point where it would appear that Moss would drive a Formula 1 Ferrari in Rob Walker colours for 1962 and, due to being so impressed at that test in September at Monza, a GTO in light green BRP colours for his father. Due to the unfortunate events at Goodwood on Easter Monday 1962, none of that was to be.

In the meantime, a ‘works’ drive was set up whereby Stirling would drive 2643 at the early season Daytona 3 hours race. This was the forerunner of today’s 24 hours which utilised both the banking and the road course at the Floridian circuit. In practice, although he very much liked the car, it would apparently not rev to more than 6900rpm, but this changed for the race when 7600rpm regularly came up on the straight. The car didn’t miss a beat and Moss guided it home a comfortable fourth overall, three laps ahead of his nearest challenger. The writing was on the wall – just imagine how successful a GTO would have been in Stirling’s hands.

Both the Ferraris in this feature were traded by Talacrest in the 1990s. Our thanks to John Collins for providing the cars. 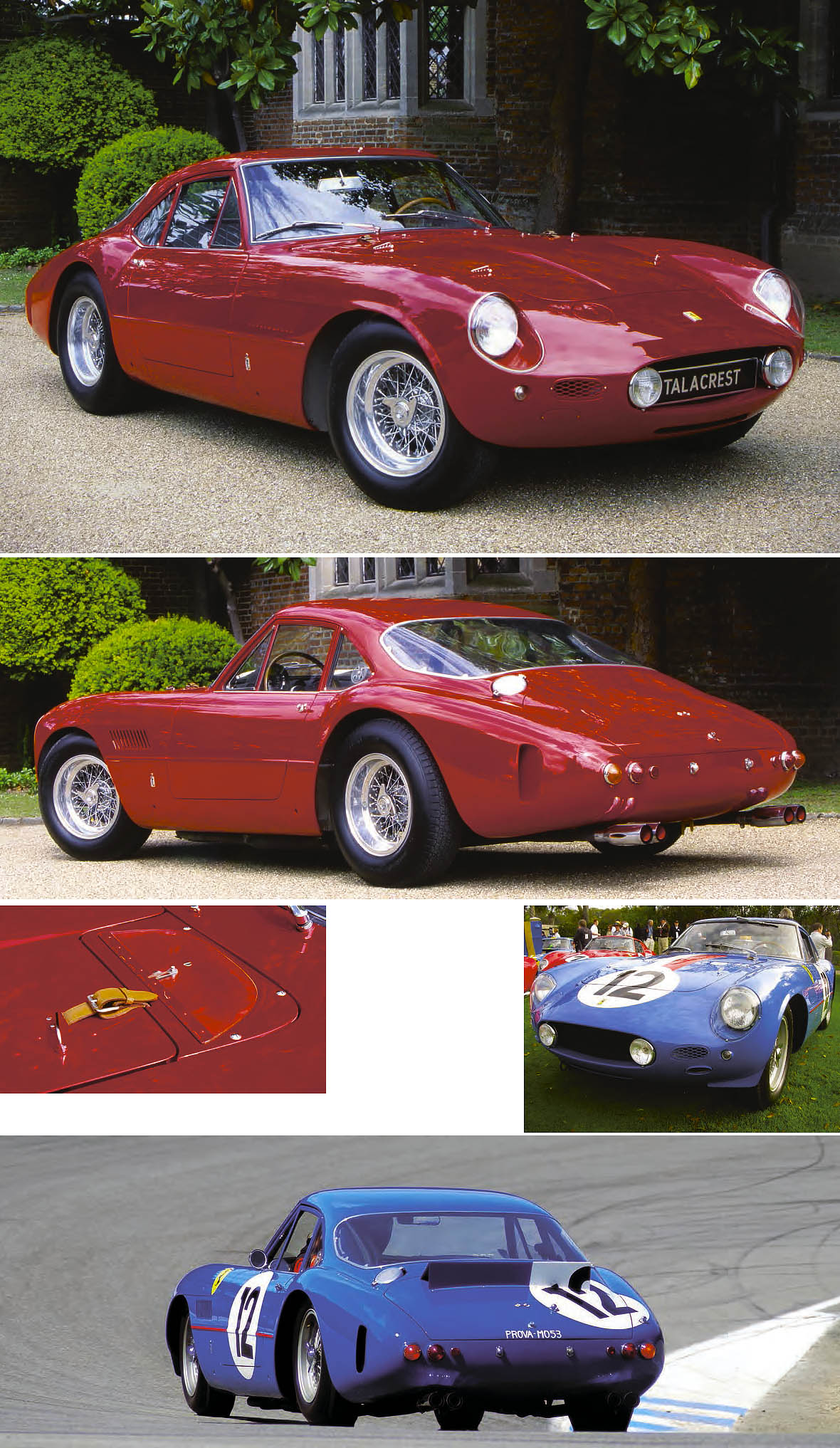 ABOVE: The Sperimentale was painted red when it was on stock at Talacrest. The car has since reverted to its original French blue.