Peter Collins Ferrari 250. Story of the unique 250 Pinin Farina prototype. Tailor made for a racing driver. This was the first prototype for a new generation of convertible Ferrari 250s – though its real claim to fame is that it was a gift from Enzo Ferrari himself to his star driver Peter Collins. Words Massimo Delbo. Photography Dirk de Jager.

You’re English, you work hard, and you’re successful enough to offer a Ferrari convertible as a present to your new American wife. One day, you fit disc brakes and new wheels (taken from a Jaguar D-type, no less) and drive it back to Maranello to tell Enzo Ferrari in person that you improved the car so much, he should copy it. He doesn’t kick you out of his office, but follows your suggestion, and changes the destiny of his company.

That’s not a fantasy: it’s exactly what happened at the end of the 1950s to racing driver Peter Collins, his wife Louise and her Ferrari, a 1957 250 Spider. The one in these pictures, in fact: chassis number 0655. 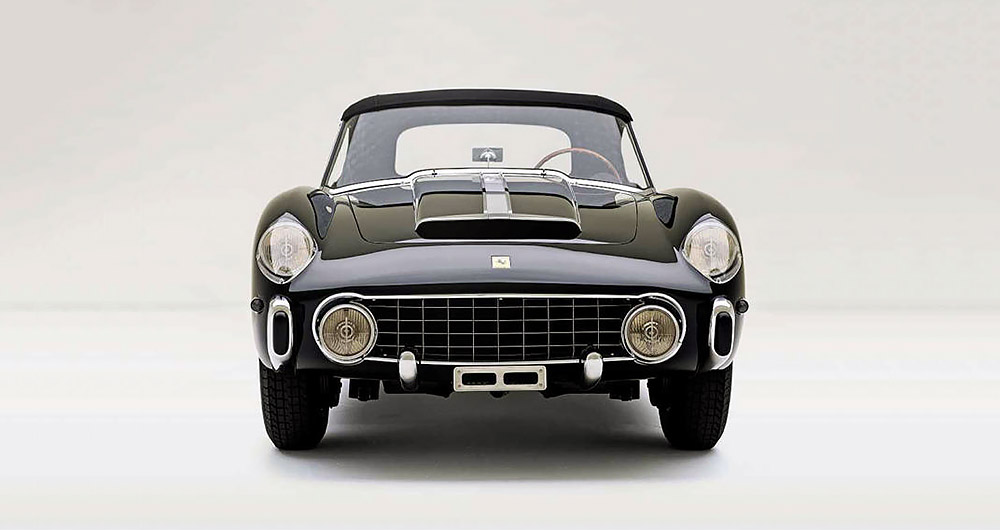 Peter John Collins was 24 when, at the end of 1955, he arrived at Maranello with a new contract as works driver. Enzo Ferrari liked the way the good-looking Englishman managed to win that year’s Targa Florio, after Stirling Moss damaged the Mercedes-Benz 300SLR they were sharing. Ferrari believed that Collins was a potential world champion, both in Formula 1 and sports cars, but what he didn’t expect was the impact of this man on his family, and his son Dino in particular.

Dino, a talented engineer mere weeks younger than Collins, was very sick and forced to stay at home. So the new Ferrari driver spent time with him, talking about cars, life and more, even describing the latest films to him. In June 1956 Dino passed away. 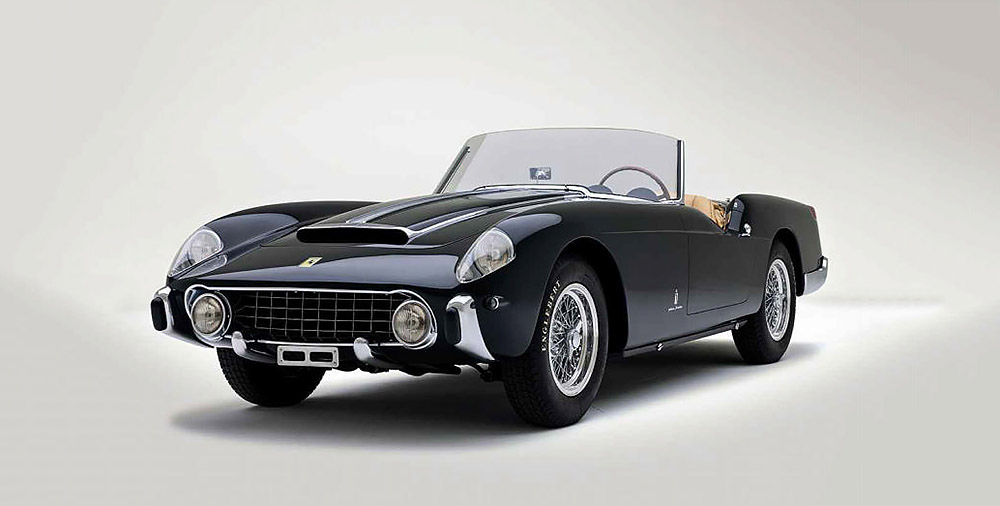 The following February, Peter married American actress Louise Lanette Cordier. When they arrived back at Maranello, Enzo didn’t want the new couple to live in a hotel, and gave them one of his houses.

‘We were dividing our time between Monte Carlo and this house,’ says Louise Collins, ‘and one afternoon Peter came back with this beautiful Ferrari. I was not surprised, because he drove many of them for work, but this time he told me that it was my new car. I was upset because of the money I thought he’d spent, but he told me it was a present from Enzo Ferrari himself. From that day, the 250 became part of our life.’

It was registered in her name on 28 February 1958, with the Modena numberplate MO 46146. The two-seat Berlinetta was a very special car, not simply because it was one of only 40 built (36 in series plus 4 prototypes) but because it was the first of those prototypes. The 250 Cabriolet was launched in 1957, to fulfil demand for an open, road-legal car. In late 1956, Pinin Farina was put in charge of the project, using a 250GT chassis (this one, number 0655) as a base, and he unveiled his new creation at the Geneva motor show in March 1957. 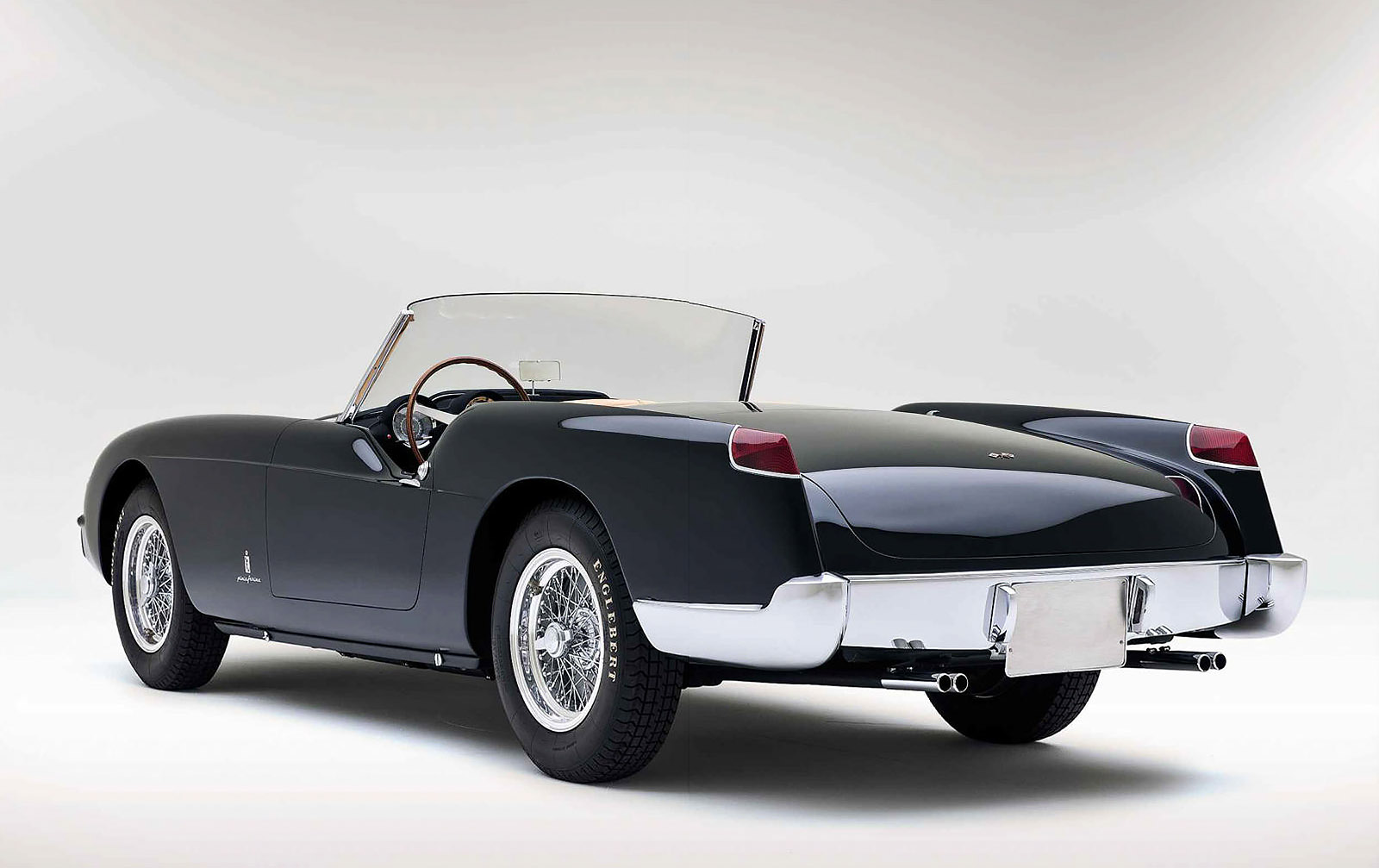 The car was an immediate hit: beautiful, elegant, with unusual tail-lights that poured over the top of the rear wings, Cadillac-style, plus some inspiration from the Superfast in the front bumperettes and the size and shape of the grille. The prancing horse logo on the bonnet was bigger than standard too, as on the Superfast, while the left-hand door was unusually cut away to make more space for the driver’s elbow. Inside, compared with the 250GT Coupe, some of the instruments moved to the centre of the dashboard, while the windscreen was supported by two vertical struts only. It didn’t appear to have much weather protection but, then, it was a show car.

‘I drove the car a lot,’ says Louise Collins. ‘I still remember the amazed stares of onlookers’

By the following May, Ferrari had produced the certificate d’origine, the document that allowed the sale of the car, and the first prototype of the 250 Spider series (named ‘Berlinetta Spider due posti’) was delivered to the Compagnia Intemazionale di Genova, active in the cruise ship business. It was registered on 14 May, with the number plate GE 98180, for the declared sum of 5,455,000 Italian lire. On 17 January 1958, the car was sold back to Ferrari for 4,900,000 lire and, when Louise Collins received the car only weeks later, it was different again from what had been shown at Geneva.

‘I’m very sure of one thing,’ says Louise Collins. ‘When Peter arrived home, the car had the soft top, and it was closed, we were in full winter, and the car was of a very dark colour, which I remember as a dark blue. People have often asked me if it was dark green, but it was definitely blue.’ 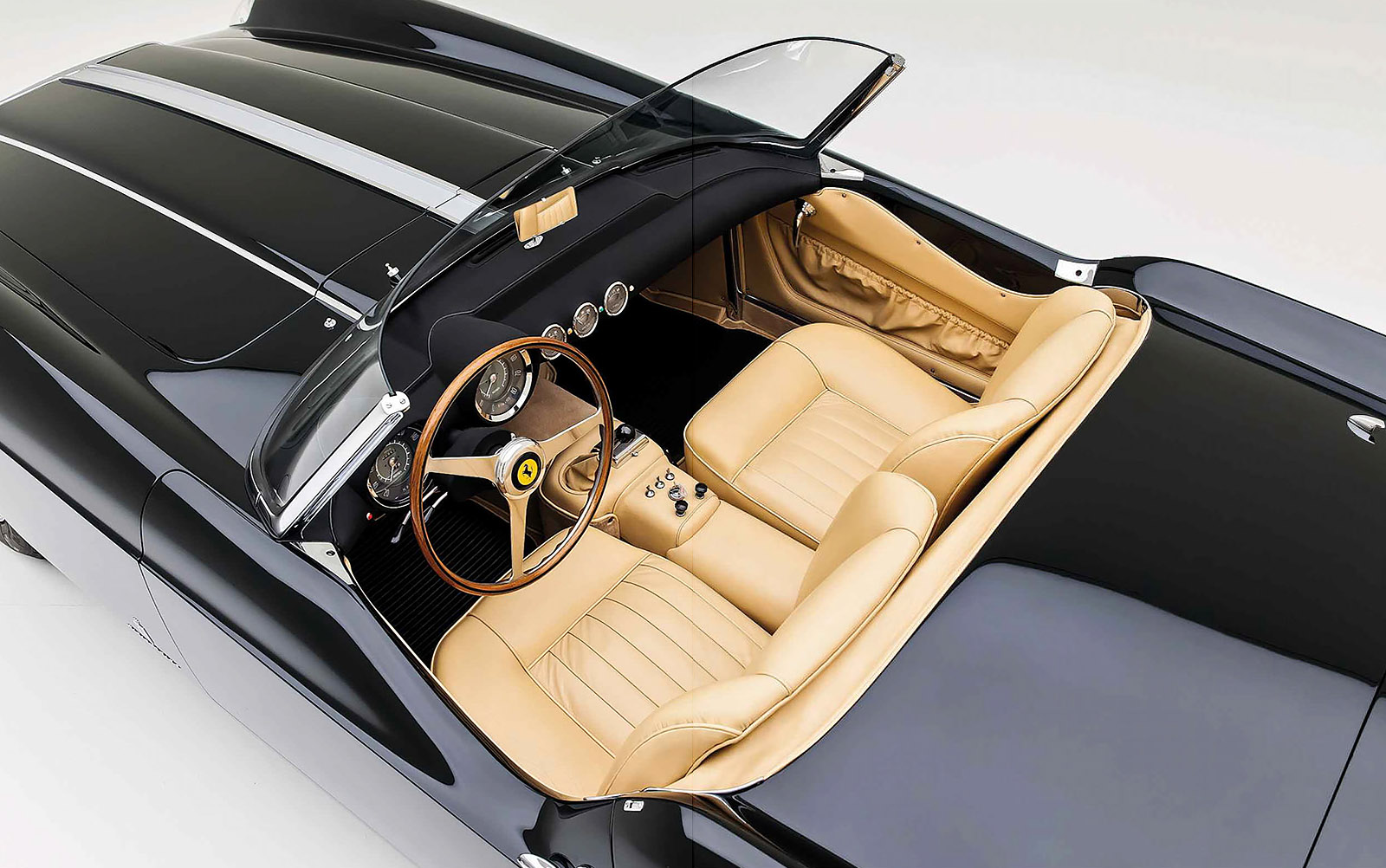 The confusion has arisen because the colour seems to change according to the light. Inside the photo studio, you might think it’s green; outside in the shade it could appear black. But under direct sunlight it is definitely blue.

Being the first of the four prototypes, the Collins car is furthest removed from the 40 production cars. Major changes would be made to the shape of the rear bumper, the tail-lights and the headlamps, though they remained covered. The front bumperettes stayed, however.

‘The car was an immediate hit: beautiful, elegant, with unusual tail-lights that poured over the top of the rear wings, Cadillac-style’

The colour was not the only change that had been made after the Geneva show: two lights were added on the front wings, and are clearly visible in period pictures. The soft-top is a mystery: the level of its finish means it must have been designed and manufactured by somebody with great expertise – as though Enzo Ferrari himself wanted to ensure the car was fit for the family of his works driver, his son’s close friend. The soft-top has a chrome mounting to fit to the windscreen, while the two doors are equipped with a matching set of winter sidescreens, with small chrome embellishments.

It’s extremely likely that, as show cars are built against the clock, the soft-top could not have been finished in time for the Geneva show. At least it was ready for European road use.

‘I drove the car a lot,’ says Louise, ‘in Modena and in Monte Carlo, when we were living on our boat. I still remember the amazed stares of onlookers while I was reversing it at the harbour to get closer to the boat. The 250 was our car: it was the one we’d use to go to races around Europe, or out for dinner. It was very reliable and never let us down, probably because the maintenance was done by Peter’s racing mechanics. I remember one journey from England to Modena with the family cat on the gearbox tunnel. In Paris he was yowling so much, we were afraid we’d be arrested for catnapping.’ 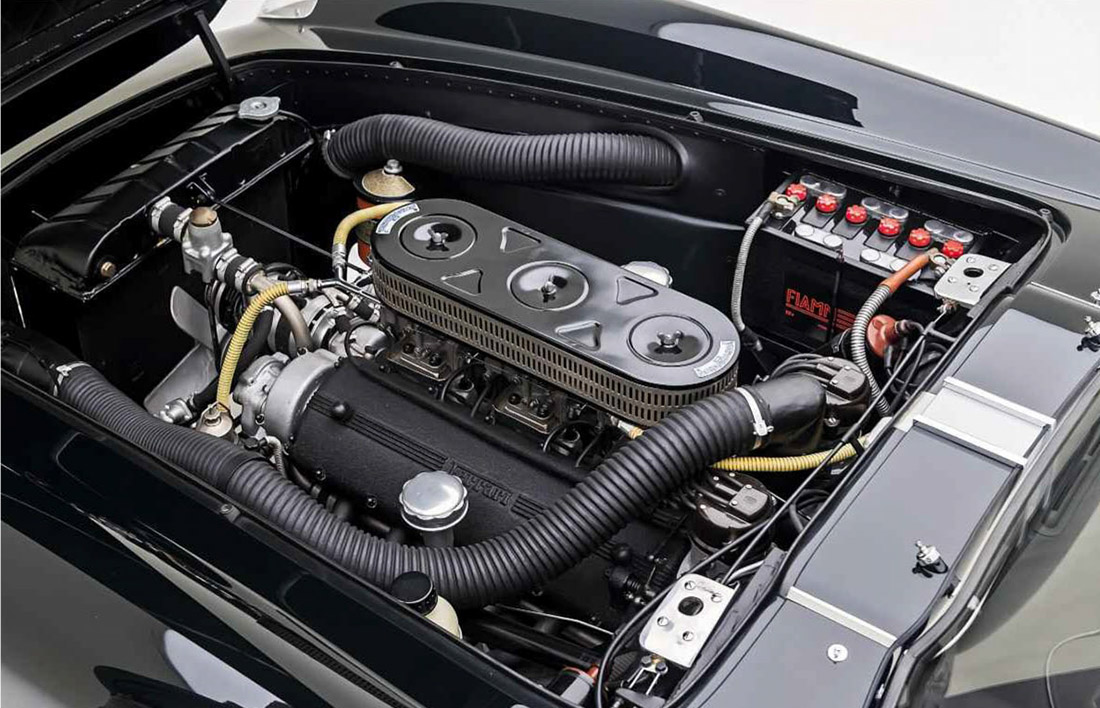 Below and right The Collins’ Ferrari is most recognisable as a 250GT Pinin Farina from the front; racebred heart is a 3.0-litre Colombo V12, producing 240bhp at 7000rpm; minimal space for luggage didn’t deter the Collinses from using it.

A one-off prototype Ferrari owned by one of the most charismatic racing drivers of the period would be significant enough – but there’s more. In 1957 and 1958 Peter Collins’ teammate was Mike Hawthorn; they were very good friends, and spent much of their free time together. Hawthorn was a great advocate of the Jaguar D-type’s disc brakes, far more advanced than the drums still being used by Ferrari. He shared his opinion with Collins, who also knew how good they were from the point of view of a rival, racing against them, and he’d spent a lot of time trying to convince Ferrari to adopt them, but without success.

During summer 1958, Collins was in England, driving the 250, and asked Harold Hodkinson – who had developed the disc brake while working for Dunlop – if it was possible to fit them to the 250. Hodkinson used the type normally installed on the Jaguar Mk2 and XK150, but there was not enough space between the caliper and the Ferrari’s Borrani wire wheels. So he also fitted the disc wheels from a D-type, creating the very first Ferrari to employ disc brakes – even before the Formula 1 cars, which would adopt them for the Italian Grand Prix at Monza, the following September.

Collins himself never got to enjoy the fruits of his idea: he was killed at the Nurburgring four weeks earlier. ‘After the accident, I felt terrible,’ says Louise, ‘and I left the car for a few months at Ferrari, before importing it into the States. And then I sold it, because my new lifestyle was really too different from the one required to own a Ferrari.’

The new owner was Otto Zipper, a racing driver who owned a Ferrari showroom in California. Zipper was a good racer and businessman but not what we would today consider a good caretaker: he added a chrome strip to the windscreen surround, repainted the body black, and retrimmed the interior with Rubin Red leather. He kept the car for some years and in 1964 it played a role in the movie Goodbye Charlie, starring Tony Curtis, Walter Matthau and Debbie Reynolds. 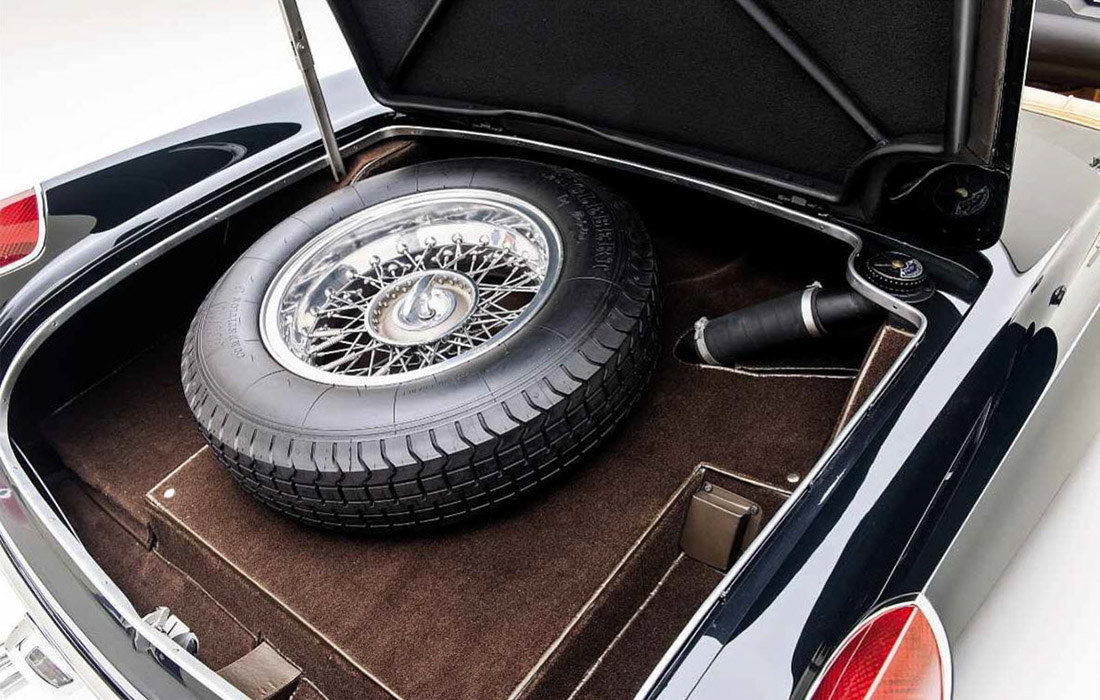 After that, the 250 passed through the hands of three US owners before joining the collection of Bob Lee in 1986. He still owns it and restored it in a way that satisfied even the demanding requirements of Ferrari Classiche. To obtain certification, only one modification had to be made: the Dunlop rims and disc brakes had to be switched back to wires and drums, as per the original configuration. Today, those brakes and the Dunlop racing wheels live a sedate life, preserved close to the car as a reminder of how important, for many different reasons, this 250 is.