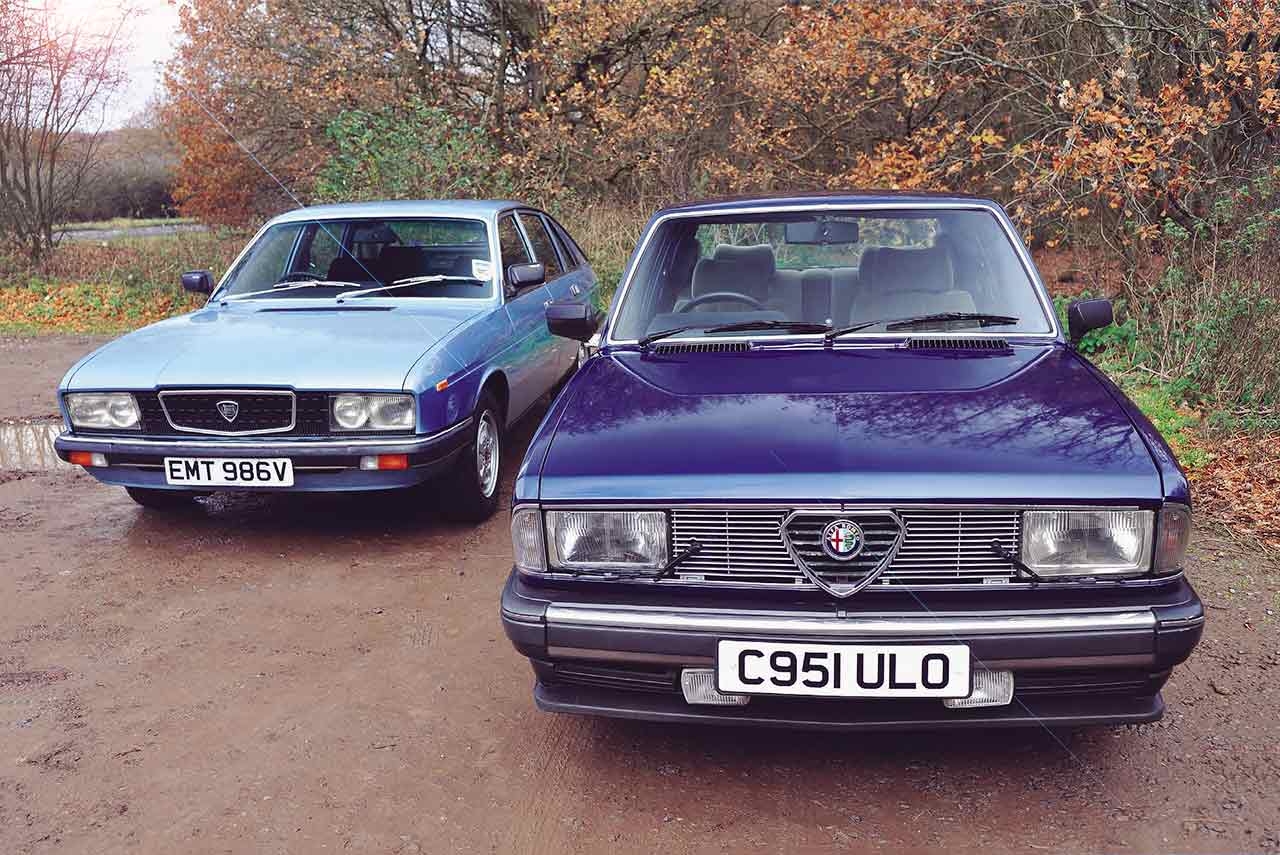 The Italians have always had an uncomfortable relationship with big saloon cars, be it as makers or buyers of them. In Italy, a large four-door car equals both thirst, punitive taxes, high insurance costs and a display of personal wealth that might bring the unwelcome attentions of the tax man in a notoriously tax-averse nation.

Historically Italians have struggled to understand the subtleties of buyers’ motivation in a market that can bring great rewards for those who get it right. That mind-set has tended to make their attempts at building luxury vehicles all the more compelling to watch from a safe distance.

The Lancia Gamma and Alfa 6 both fatally misjudged the mood of the big car market in Europe where the Germans were already setting the agenda 40 years ago. Both showed poor timing – the Lancia in that it was released to the public too early, the Alfa because it was released too late – and neither was marketed with the sort of enthusiasm that their flagship status deserved.

They were the unwanted children of distracted parents, the Gamma too far down the developmental line to be cancelled by Fiat, the Alfa’s styling and engineering frozen in the pre-oil crisis early 1970s when it was put on hold for six years in favour of the more commercially important Alfetta, with which it shared its doors and floorpan and suspension layout (torsion bars front, De Dion axle rear), if not the transaxle gearbox/diff concept.

The trouble was the world had moved on by 1979. There were all kinds of really capable new saloon cars from BMW, Opel and Mercedes for buyers to choose from with reputations that inspired much more confidence in a luxury car market where Alfa had not had a contender for 12 years.

The public showed its indifference by only buying 12,000 Alfa 6s, a figure that includes both 2.0 and 2.5-litre V6 variants and the five-cylinder diesel. Bizarrely the tax-beating 2.0-litre petrol was thirstier than the 2.5 because it had to work harder to shift the weight. The Gamma, also available as a tax-dodging 2.0-litre, faired slightly better, selling 15,000 examples between 1976 and 1984. But its commercial reputation was already in tatters at the beginning of the 1980s due to a variety of widely reported engine problems, chief among them the potential for the cambelt to strip its teeth if the power steering was held on full lock.

The Gamma, a car pitched somewhere between the appeal of the flat-four Flavia and the V6 Flaminia, was arguably the last ‘real’ Lancia, its front-wheel drive chassis architecture inspired by the Beta but with a bespoke all-alloy engine that was never used in anything else. A big horizontally opposed four-cylinder engine, no matter what its supposed benefits, made the car a hard sell at the best of times; Lancia pointed out that, because it was both light and low-slung that it could mount the boxer engine well forward of the front wheels, thus freeing up cabin space without having a negative effect on aerodynamics or handling. Others suggested that a flat-four neither sounded nor felt right in an executive car, nor delivered the economy benefits its makers claimed.

Still, at least the Gamma’s svelte Pininfarina body looked elegant and modern. Alfa tried to make a case for the boxy, ultra-conservative styling of the 6 by saying it didn’t attract ‘unwanted attention’ in an Italy where kidnapping was still a great sport (the kidnapping and murder of former premier Aldo Moro was still fresh in the memory) but the excuse didn’t really wash.

Even Alfa’s bosses knew the 6 was barely saleable. Seven managing directors oversaw its development but only one had the nerve to give it the green light for production.

The shame was that the 6 was really a fairly nice car under its boxy bodywork. Its saving grace was a really delightful V6 engine – the first of the great Busso V6 line – a 2.5-litre unit with 156hp (with a bizarre sixth-roat Dellorto carburettor set up). It could push the car to 120mph, making it Italy’s fastest four-door production car for a while. It handled well, too – useful when you needed to out-manoeuvre all those Red Brigade types who weren’t noticing you. For those who really were nervous about bandits, a popular option for the Alfa 6 in Italy was bullet-proof glass and body panels. Most 6s went to government officials and possibly lesser Mafia hoods.

At £11,900 in Britain, the 6 was the price of two 2.0- litre Giuliettas and a significant £2000 more than a Gamma. The truth was Alfa GB would sell you a 6 for half the asking price, because they were so desperate to get rid of them. Only 128 Alfa 6s were sold in the UK, whereas Gamma saloon sales peaked at just under 1000 cars in 1979 alone, although dropped swiftly thereafter.

Both cars survive in handfuls today and I suspect Ian Brookes is the only man in Britain who owns an example of each. His dark blue Alfa 6 is one of the later fuel-injected type with the post-1983 facelift that meant twin rectangular (rather than quad circular) headlamps and new bumpers.

Lancia also went to Bosch injection on its Series 2 Gammas (post-1980) but Ian’s low mileage car is a carburettor Series 1 with the original-style alloys and front grille/bonnet arrangement.

Lancia offered a four-speed AP automatic on the injected cars but a five-speed manual was mandatory on the Series 1. There were manual ZF five-speed Alfa 6s in Italy but all UK examples were ZF autos.

In some ways you cannot blame Alfa for making the car look so innocuous: can you honestly say the 6 is any less matronly looking than, say, a 1979 BMW 5 Series E12? Visually the Gamma has improved with age and you can see links to the BMC/Pininfarina 1800 show car and the Citroen CX in its sweeping two-box profile with a conventional boot lid (albeit double-hinged with a nifty reversing window hidden behind slats) where you expect to find a hatchback. Comparisons with the CX are no accident: had Fiat’s merger with Citroen gone ahead in the early 1970s, then the Lancia would have emerged with the CX-type gas-and-oil suspension.

Inside, stylish details like the design of the door cards and headlining set the Gamma apart from the more conventionally decadent Alfa with its fussy dash and pretentious wood trim. Both have sun shades for rear passengers, quad head restraints and full electric windows and mirrors, but only the Alfa has a power-adjustable driver’s seat. The Lancia blue ‘L’ cloth trim is by the Italian luxury fashion house Zegna but leather was optional in both cars. Each one is a practical choice with impressive rear legroom, but the Alfa has more luxury equipment, like central locking, to justify its flagship status.

Underway, the Lancia feels superficially livelier but rougher than the silky Alfa with its curious, throbby offbeat sound that can’t be mistaken for anything else. It is 20hp down on the Alfa 6 but largely makes up for that with superb low-speed torque. It is slightly lighter with a well plotted set of ratios in a clunky but positive gearbox that gives almost 60mph in second gear and well over 100mph in fourth, should you be brave enough to use 6200rpm.

At those revs, the flat-four is smooth – smoother than a five-cylinder Audi – but nothing like as silky as the Alfa’s V6, which is refined at all speeds; although, at tickover, you can just hear its short pushrods chattering as they open the inlet valves. Moving off, the Alfa V6 churns a little against the torque converter but its refinement probably gives a false impression of how quickly it is really gathering pace. The overall gearing is quite low to keep the acceleration interesting.

If the Alfa had one of the great production engines of the decade to recommend it then perhaps the Lancia Gamma’s only contribution to the cause of motoring progress was its steering, a powered rack that set new standards of feel and response for big front-drive car at the time. It is still impressive today; free from front-drive kickback, as well as being quick and positive. The Lancia is planted on the road on its skinny (by modern standards) tyres and is wonderfully understeer-free. This allows you to throw it around at will like something much smaller; the ‘giant Alfasud’ analogy is by no means fanciful.

Then again, the Alfa 6 feels like a big Alfetta, which is no bad thing. It certainly does not suffer for not having adopted the smaller car’s transaxle layout. The steering is crisp and communicative but the built-in (but not excessive) understeer is such that it feels stable at all times. If anything there is a sense that you would be more likely to get the rear end of the front-drive, neutral-handling Gamma to move around than the rear-drive Alfa.

On ride and brakes, it’s a draw with honourable mentions in both cases, although perhaps the Gamma’s biggest drawback is scuttle shake under certain circumstances, which manifests itself as a somewhat rattly dashboard. That is, apparently, something to do with an inherent weakness in the front of the floorpan.

My instincts sway towards preferring the Gamma, although like Ian, I would happily own either of these cars. In the case of the Gamma I have, multiple times; I’m currently still missing my last Gamma saloon and will inevitably have another at some point.

I have come close to owning an Alfa 6 on several occasions but never felt comfortable crossing the line. Somehow it always felt like a poor relation to the much grander and more ambitious Fiat 130 saloon; thus, when the time came to put my money where my mouth was the big Fiat won every time.

It still would today (Ian Brookes would no doubt agree with me, as he also owns a beautiful 130 coupe, avowedly his favourite car in a collection that includes a Ferrari 412) but somehow the Gamma has a sufficiently different appeal to keep the fascination alive. Bravely designed and poorly executed, it has the more interesting story to tell, its idiosyncratic engine and chic fastback styling somehow making it a more appealing classic than it ever was a new car.

Big Italian saloons of the 1970s don’t come much more charismatic, quirky or rare than this pairing. Front-drive Lancia has fine steering feel; Alfa 6 also has an impressive helm but understeers ultimately.

Gamma looks like it should have a fastback hatch but it’s a saloon. Pininfarina’s original design jostles modernity with gawkiness. Ultra-boxy shape of the Alfa 6 is about as conservative as you can get. Still, it did usher in the glorious Busso V6 era.

“On the road, the Alfa 6 feels like a big Alfetta, which is no bad thing ”