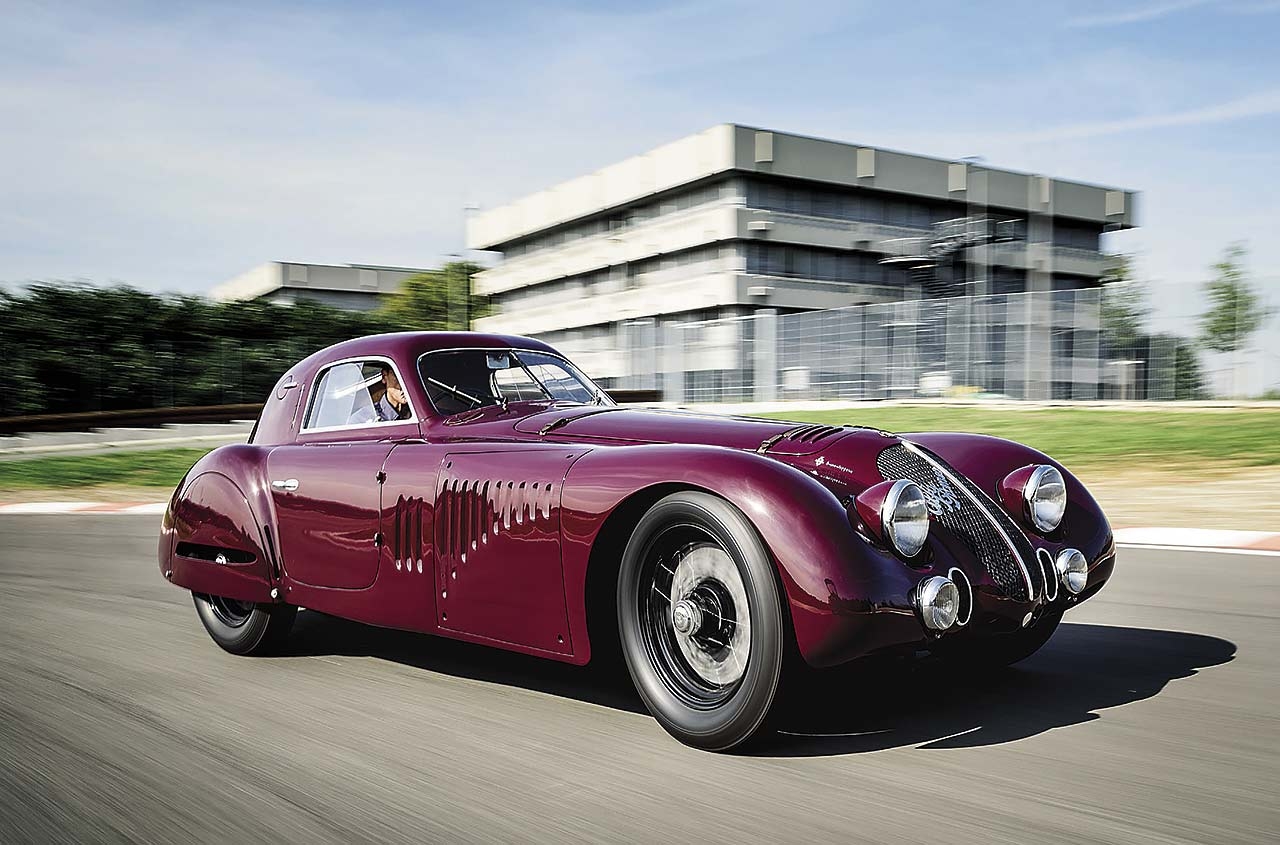 At our photo shoot at the old Alfa Romeo test track in Arese, it’s hard not to feel a sense of wonder. We’re in the presence of one of the most iconic cars in the history of Alfa Romeo. Confronted by this commandingly imposing 8C you feel attraction, respect, even awe. Its shape takes your breath away; its story would make an improbably twisted plot for a movie; and its run at Le Mans, where it led the field by fully 189km before crumbling away due to a mechanical fault, is the stuff of legend.

This Alfa Romeo 8C 2900 B Le Mans was born in 1938, encapsulating Carlo Felice Bianchi Anderloni’s then-fresh ideas in the field of aerodynamics, in which Touring would become pre-eminent.

After almost half a century of wanderings, this unique Alfa 8C 2900 B was rightfully relocated in the 1980s back to its hometown of Milan. After a series of delicate negotiations, it became part of the Alfa Romeo’s precious collection in the museum at Arese, where it has remained ever since.

But it’s no pampered exhibit. This 8C has led an active life in the limelight at events and shows in Italy and across Europe. In 2006, it underwent a restoration, with particular care paid to its many special details, bringing the car back to its original form, including such items as the chrome moulding that runs vertically between the two halves to make up the characteristic front grille. At the same time, the discovery of some remaining paint from 1938 meant that the original bodywork colour could be recreated: a unique dark red that was popular among Italian race cars at the time.

The history of this unique 8C 2900 B, chassis number 412033, dubbed ‘Le Mans’ because of its famous race debut, began in the spring of 1938. As with most 8C 2900s, Alfa Corse entrusted the coachbuilder Touring with the manufacture of the chassis, which was originally intended for an open body to run in the Mille Miglia race.

The order, however, required that it be prepared for the 24 Hours of Le Mans of that year. Enzo Ferrari personally sent the race rules to the Milanese coachbuilder to allow it to create a car that complied with the rulebook. The request was for a ‘berlinetta coupe’ (in other words, a convertible saloon). The car was completed in May 1938, just in time for the Le Mans race (18-19 June). Its appearance on the Circuit of La Sarthe took everyone’s breath away, not only because of its stunning bodywork, but also because it was not an open car, which was the norm for racing cars in those years. The bodywork was made to Touring’s ‘Superleggera’ spec with ultra-light aluminium panelling over a steel frame. The sizeable coupe had just two seats.

What was really important, though, was that for the first time, Touring speculated that aerodynamics could be every bit as beneficial as weight loss in racing. Compared to the road version, the race version underwent many changes. Three additional slots were opened up on each flank and six other ones on the tail to serve as air inlets/outlets to improve ventilation. The unusual hump over the tail surrounded and protected the 100-litre fuel tank which was located inside the passenger compartment, behind the seats. The car was powered by a dual-block, eight-cylinder in-line engine with two superchargers, giving it 220hp. Compared to the regular 8C engine, the bore was increased from 68mm to 68.25mm. The transmission, meanwhile, located at the rear axle, was made of Elektron and derived from the 8C 2900 A.

The 8C 2900 B Le Mans (Number 19) was raced by Raymond Sommer and Clemente Biondetti. By nine o’clock on Sunday morning, they were no fewer than eleven laps ahead of their competitors. But the collapse of a tyre, followed by a mechanical failure, forced the car into a spectacular and unexpected withdrawal from the competition. See our separate panel for the full Le Mans 24 Hours story.

In February 1939, Alfa Corse sold this unique car to a Roman aristocrat called Michelangelo Leonardi. This was the first of a long series of transactions and changes of ownership. Among the races undertaken by private drivers, we should highlight the 1946 performance of Inicio Bernabei over the flying kilometre between Rome and Ostia, which took 18 seconds, recording a top speed of 199.225km/h (nearly 124mph). Although this was the best result of the day, the Alfa had been put into a ‘free’ category so it was excluded from the official results. The car’s racing career came to an end the same year, when supercharging was prohibited in the Sports class.

This car went on to become part of Franco Venturi’s renowned collection. After Venturi’s death, on the cusp of the 1960s, the 8C ended up in the hands of Corrado Lupellini and Giovannino Lurani, respectively a journalist and the editor of Auto Italiana magazine. It was then sold on to England. The new owner attempted to drive it back to Italy, but the car, as it had been sitting for a long time, developed a serious cylinder head failure due to poor cooling.

After three subsequent changes of ownership, all in foreign countries, the car was finally rescued and properly taken care of by Mike Sparke. He restored it and brought it back to Italy in 1986 for the Mille Miglia and also the Concours d’Elegance at Villa d’Este. A few months later, negotiations with the Alfa museum at Arese came to a happy end. Alfa Romeo paid a high price for the car, though: it basically exchanged an engine and a lot of parts for an Alfetta 158, the first single-seater to win a Formula 1 championship. But we can be thankful: the glorious 8C Le Mans is in the best possible hands.

On 25 June 1987, the 8C 2900 B Le Mans underwent a series of tests in Pininfarina’s wind tunnel in Grugliasco. The aim was to test whether Touring’s aerodynamic theories were borne out in reality.

The wind tunnel tests showed an extremely wide wake created to the sides and underneath the car. The ‘cross flow’ map shows two whirlwinds generated by the main body and the passenger compartment; this created lift (Cz) of 0.447. The presence of those two whirlwinds – according to Pininfarina’s report – indicated that the Kamm-type shape at the rear of the car was not as efficient as it could be. The car could have had better aerodynamics and therefore higher performance if the lower part of the body had been manufactured better so that the whirlwinds could have been avoided. The Cd could also have been improved if the cooling system had been designed differently to minimise drag. Nevertheless, when you think that Touring’s design was created on pure intuition, and that the science of airflow was still very rudimentary at the time, the results are impressive.

At the 24 Hours of Le Mans in 1938, Alfa Romeo entered just one car: the very 8C 2900 B featured on these pages. Race number 19 was taken by the Frenchman Raymond Sommer and the Italian Clemente Biondetti, who were competing against a powerful French contingent, consisting of seven Delahayes and six Talbot Lagos driven by the likes of Dreyfus, Chiron, Etancelin and Rosier.

At the start, after the traditional racers’ run towards the cars lined up in ‘comb’ formation, the Delahayes driven by Dreyfus and Comotti snapped up first place. By lap 10, Etancelin’s Talbot was leading the race. Sommer, meanwhile, handed the steering wheel of the Alfa Romeo to Biondetti who, by the fifth hour, had overtaken every other competitor. It just got better: by the sixteenth hour he was 11 laps ahead, a distance equivalent to 148 kilometres.

However, when it was Sommer’s turn to drive, the right front tyre unexpectedly collapsed, causing the car to skid. Luckily, the experienced French driver did not lose control and managed to reach his pit to have the problem fixed. Biondetti, back at the wheel, increased the advantage to as many as 14 laps, 189km or one and a half hours in front of the next racer.

Victory seemed assured but it was brutally interrupted by an abrupt mechanical failure. Biondetti then did the unimaginable: he stepped out of the car and started pushing it back to the pits. His epic four-kilometre push lasted over an hour and became the stuff of legend.

At the time, the Italian press reported lubrication problems. Later investigation, however, uncovered the fact that, when the car started skidding, Sommer was brave enough not to brake. But in his attempt to slow the car down, he changed gear too abruptly, causing the engine to over-rev. The valves and engine were badly damaged and the car was forced to retire; Chaboud-Trémoulet in a Delahaye eventually won the race.

Wind tunnel tests in 1987 showed the car was impressive by 1930s standards, but there was room for improvement. BELOW: sketch by Touring’s Carlo Felice Bianchi Anderloni shows his first attempt at an aerodynamic tail.