Those of you who are familiar with serial Audi tuner Chris here will probably know him best for the impressive array of relatively modern show cars he’s kept himself busy building throughout the last few years. In fact, we’ve featured a fair few of them on these very pages, including his more-than immaculate B7 RS4 Avant only a few months ago back in Issue 40. 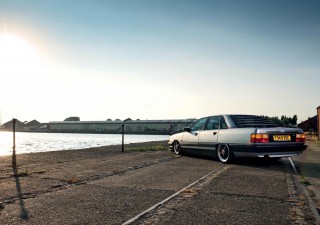 What you might not be quite so aware of, though, is the fact that it’s not just relatively new cars that tickle his fancy. In fact, his latest project – this stunning C3-shaped Audi 100 that stems from the very heart of the ‘80s – is living proof that Chris’ infamously thorough touch can also be applied to retro metal if he puts enough focus into it. Prepare for a serious slab of coolness…

“A few years back, I realised that I’d only really ever owned new-ish cars,” our Liverpool-based wheel repair specialist begins explaining how such an unlikely car ended up in his possession. Remembering the C2- shaped 100 saloons his dad used to drive him around in when he was younger, Chris initially settled for a slightly easier-to-find Audi 80 to feed his old car appetite to kick things off.

As he gradually began to bring the 80 up to the supremely high standards he sets himself with his motors, Chris’ attentions were piqued one evening when searching for some seats on eBay. “I spotted this C3 100 that looked to be in a decent condition,” he recalls. It might’ve been one generation younger than the cars that had filled his childhood, but Chris was convinced he could still make this sleek saloon look pretty awesome with a couple of period-perfect modifications along the way.

Soon striking a deal with the previous owner that saw him performing a 500-mile round-trip on a school night to ensure he secured it before someone else did, Chris’ initial thoughts were positive; with the car showing just 63,000 miles on its odometer and boasting a healthy interior and exterior aside from some slight rust bubbling on the front arches. The C3 100 is still famous for having one of the lowest drag coefficients of any production car to this day thanks largely to its smooth, rounded silhouette, which Chris was one of the main attractions to the new owner here. “It was all just a bit of fun at first really,” he muses, the car instantly filing the role as a cool weekend toy perfectly with its comfortable cord interior and silky five-cylinder engine that offered up a ride that would feel premium even by today’s standards. Until he really fell in love with it and things were stepped up a notch, that is… 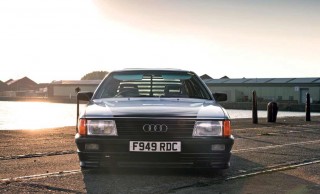 With the company he works for recently opening a state-of-the-art repair centre, Chris unsurprisingly took advantage of this incredible opportunity by rolling the 100 straight over to replace those front wings. With the previous owner supplying two brand new parts with the car, it should’ve been a fairly straightforward job, but things soon escalated until Chris and the team were found respraying the entire car in that original Sapphire Blue Metallic hue.

With the bodywork gleaming, the car was shouting out for a lower ride height even more than it was before the re-spray. This left Chris in a difficult situation where he had to decide between cutting corners and opting for a budget back-breaking static setup, or bite the bullet and splash out on a fully bespoke air suspension system to take pride of place on the Audi. And those of you who know Chris will know it was only ever going to go one way…

“I phoned Phil at The Install Company – he’s pretty much the god of putting air ride onto cars,” Chris continues. Soon ascertaining there was no off-the-shelf package for this particular application, Phil got to work to painstakingly graft a cutting-edge Air Lift Performance system onto the car. “It took a good two months to get it right… turns out Audi 100s don’t like going low without a fight!”

Now sporting a trick adjustable suspension system that was worth several times the amount he initially paid for the car, it was clear Chris wasn’t taking any prisoners with his latest four-wheeled companion – a car he admits will probably stay with him for life. “Seeing it dropped to the floor with its new paint job for the first time, I knew it was worth every penny…”

Next up, those OEM wheels and chunky tyres just had to be switched up, which led Chris down a rabbit hole of PCD and offset nightmares as he tried to find the right set of rims that would also fit on the rather unusual car. The answer eventually revealed itself in the form of a friend’s set of recently refurbed BBS RF splits that featured crackle black faces that would perfectly match those bold black bumpers. With a deal finally struck and some custom adapters painstakingly whipped up in the machine shop to address the stud pattern differences, they premium wheels were soon tucked under the immaculate arches, complementing that low ride height incredibly well.

As the 100 began to take the shape Chris had originally envisioned, the final stage of the journey (so far) revolves around trawling the more obscure parts of eBay in an ongoing challenge to find the coolest period upgrades possible to adorn the Audi with. Starting strong with that epic Audi ‘Duo Sound’ headphone dock between the rear seats – a luxury optional extra from the time that Chris has even tracked down the original headphones for too – it’s when he ventured onto the international eBay listings that things got even more obscure…

“I eventually got chatting to a guy in Belgium who was a bit of a 100 collector,” Chris brings us up to speed. “I was looking for a slatted rear windscreen louver – you never see them anywhere and I never thought I’d find one… turns out this bloke had two though!” With VW pal Ste happy to kindly collect this rare part during an upcoming driving trip through Europe, it eventually made its way safely back to Chris’ house.

Still in its factory packaging from when it was produced back in 1986, this super-cool addition has since been set off with even more retro goodies, like that angular Kamei front splitter that made its way over all the way from Austria and has since been finished up in the same crackle black finish as the bumper it now juts out of. But Chris wasn’t done just yet.

“After hours of searching, I decided I wanted to add more ‘80s style to the car in the form of barcode-style striped graphics,” he reveals. Soon taking a trip over to see pal Simon from Syco Graphix, he was steered towards a similar style to that seen on Ford’s Escort RS1600 from around the same era, leading Simon to soon whip up some custom decals that now echo that rear louver perfectly.

It wasn’t the fastest, rarest or most valuable car on the market when he snapped it up, but the thought, care and energy that’ve all been poured into his 100 since should tell you everything you need to know about how much this car means to Chris here. Admitting he often chooses it over his fiery RS4 when it’s time to go for a spin, it goes to show that your emotional attachment to your four-wheeled companion means an awful lot indeed…

THANKS The dream team: Norman, Shum and Clive, Merseyspeed Automotive Repair Systems, Matt Davis, Tony, Andy and everyone else who helped

Below: Split BBS rims are the perfect choice. Right: Original cord interior set off with period touches like that Game Boy. Awesome! 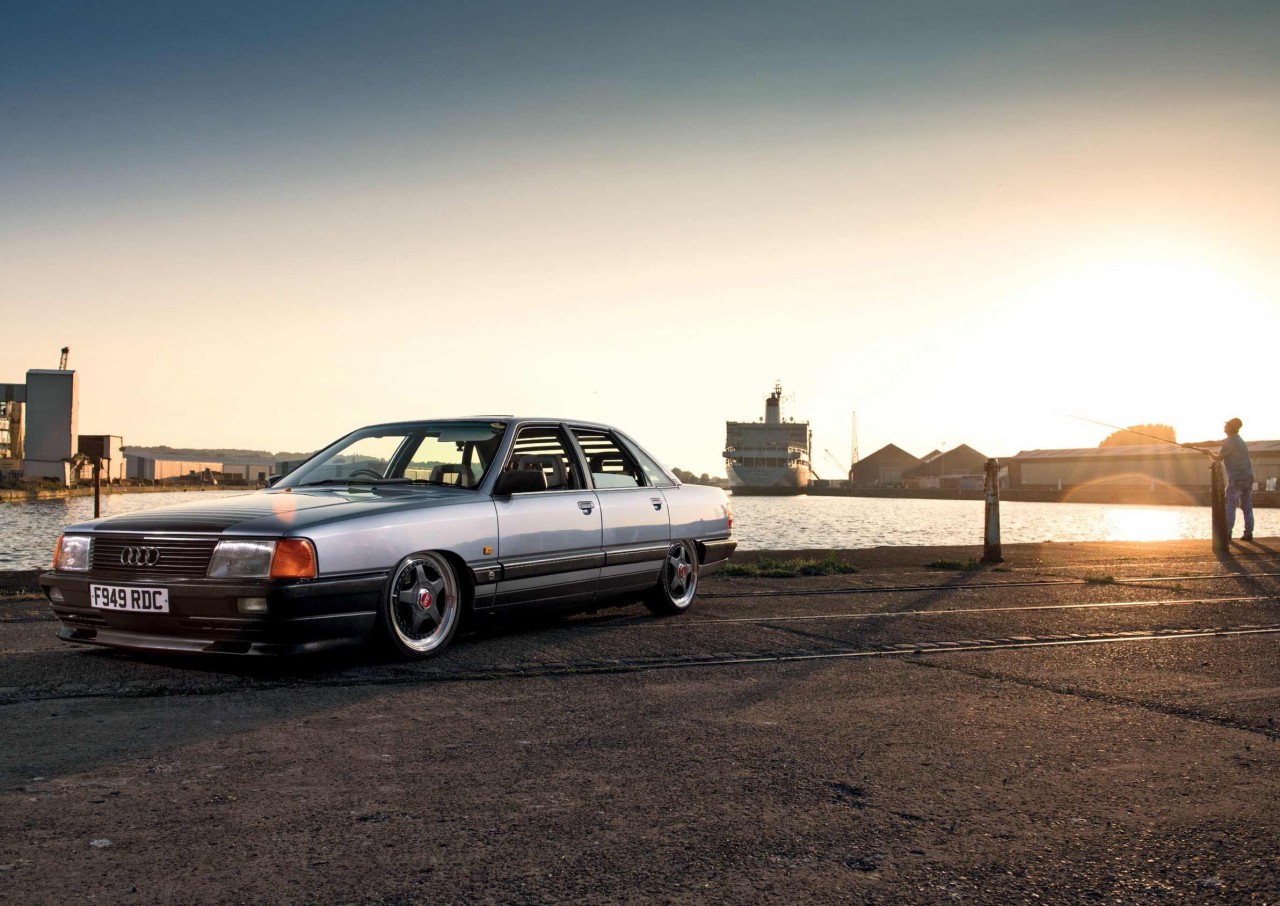 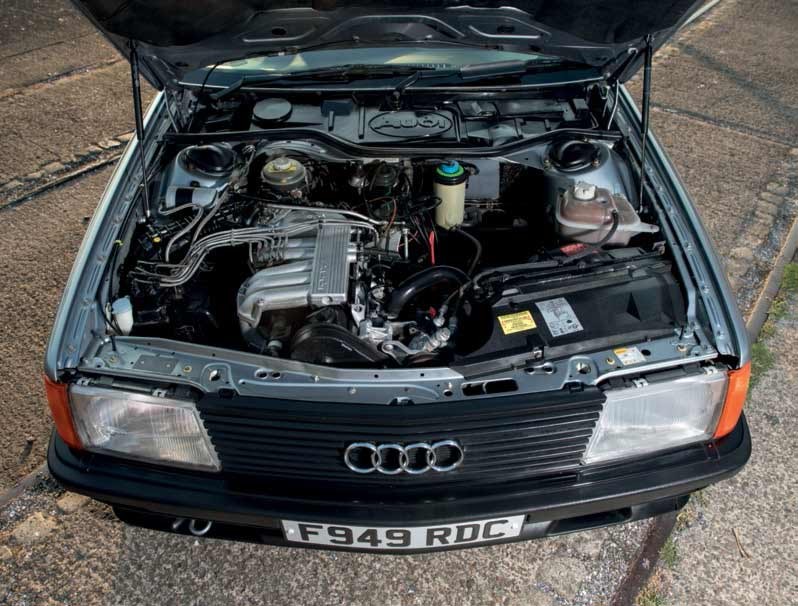 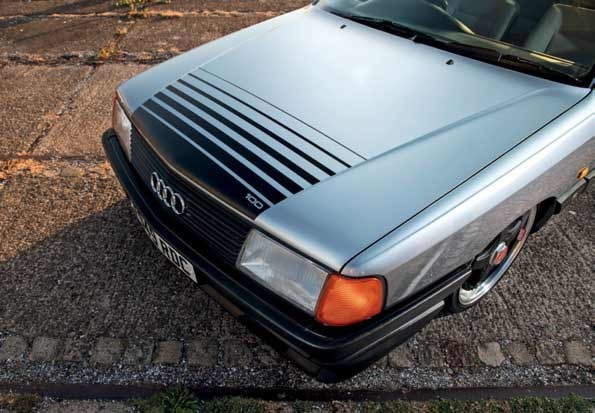 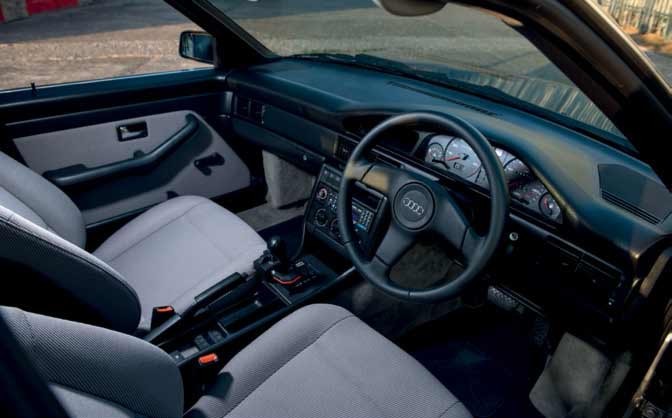 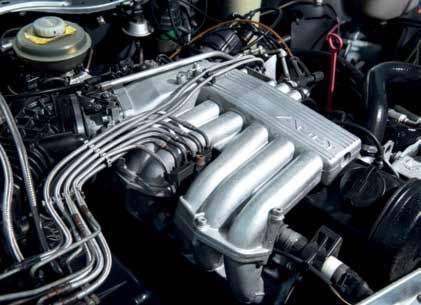 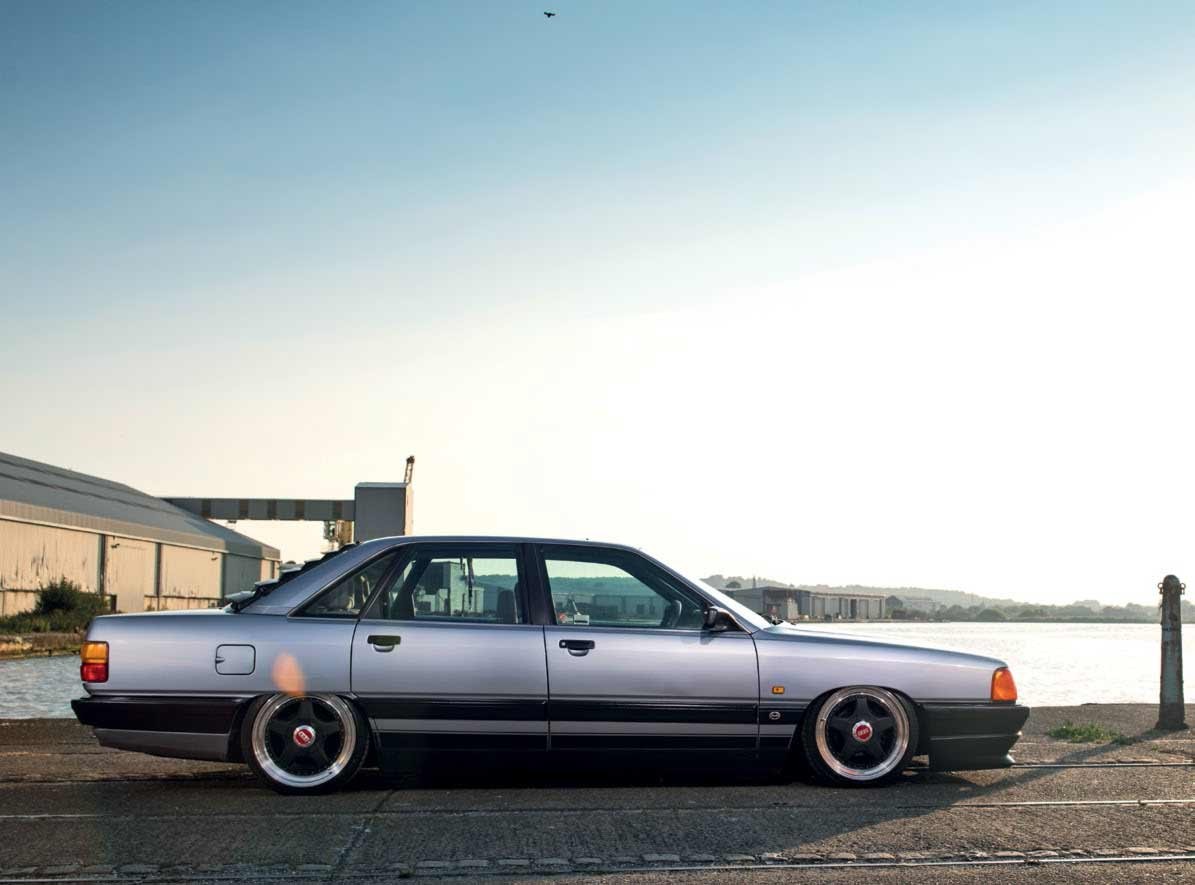 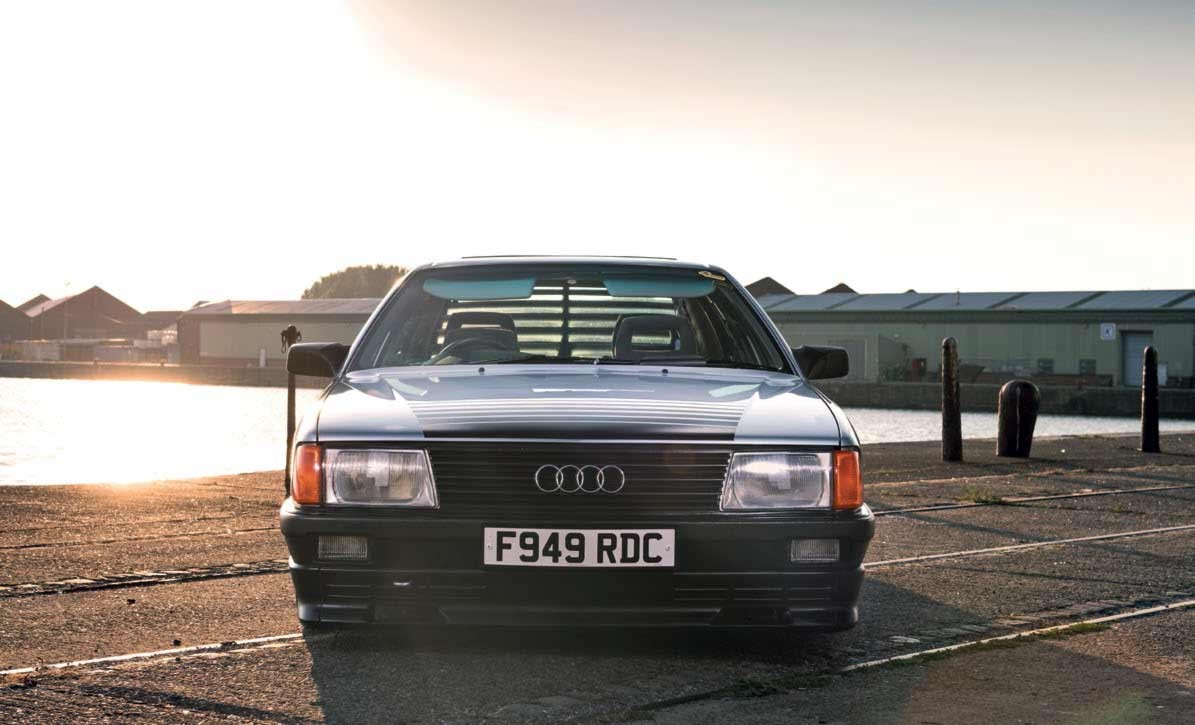 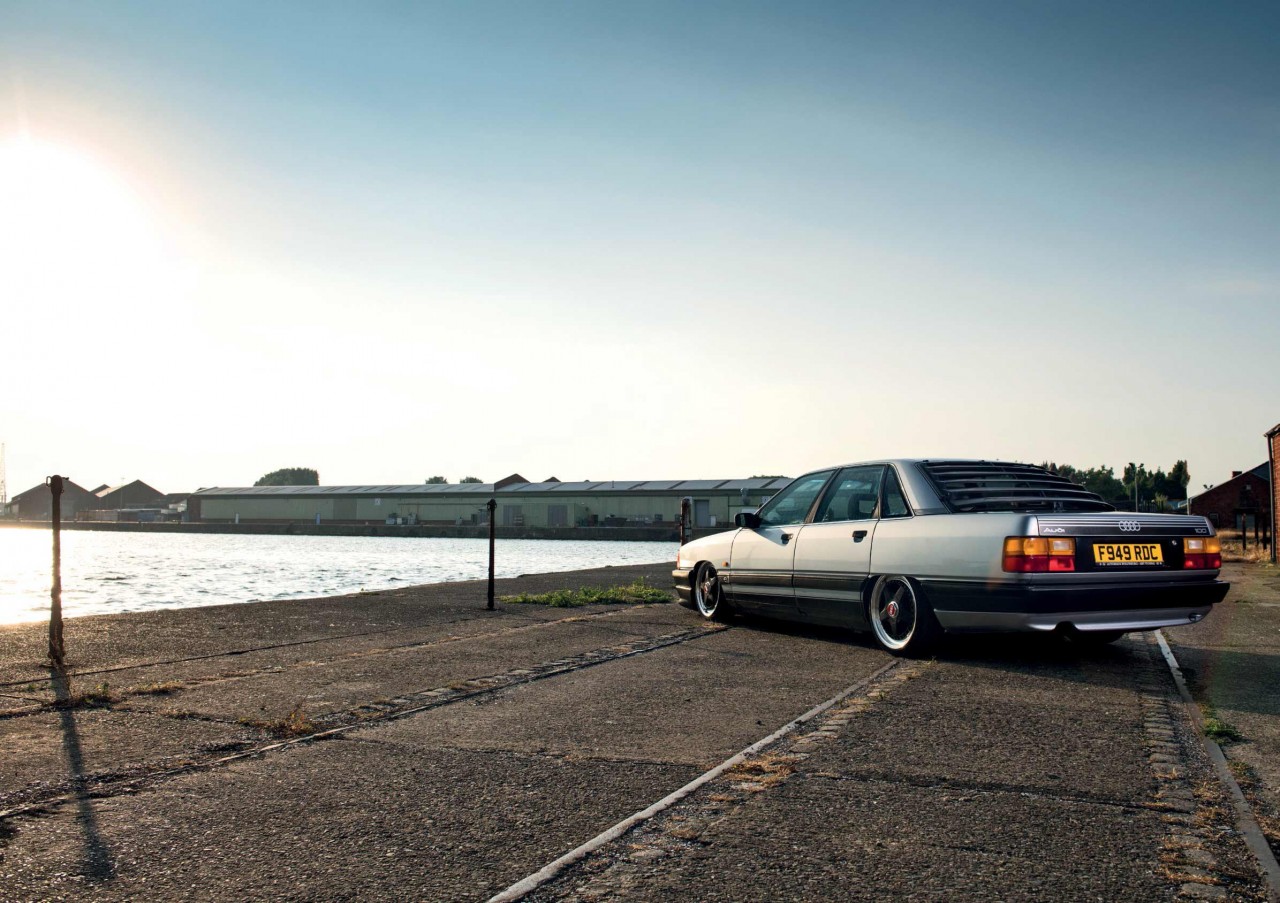 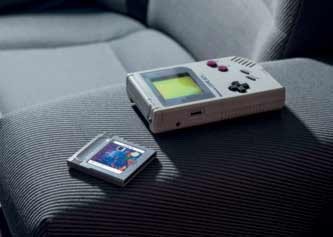 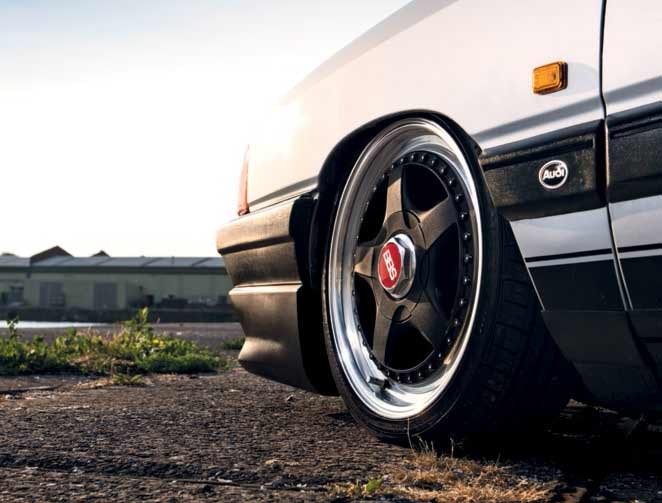 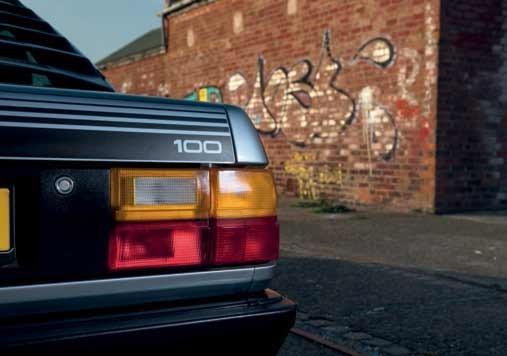 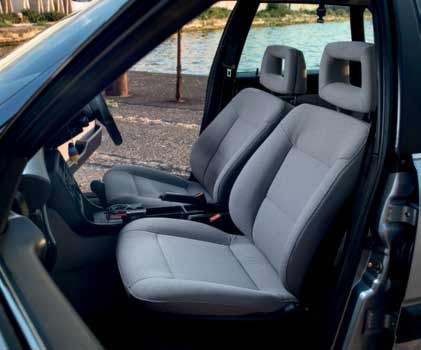 “Seeing it dropped to the floor for the first time with that new paint job, I knew it was worth every penny…”

It’s not just those barcode-style front stripes that’ve been subtly added to the bodywork, with Syco Graphix also designing lower side stripes and those awesome boot lid-mounted decals to match at the same time, too. And it all serves to create a beautifully ‘80s look when teamed with the freshly contrasting silvery blue paint job.