The process of modifying a car can take many forms indeed. For some, it’s a gradual journey that sees them slowly transforming their long-term love affair; spurred on as each small alteration makes such a big difference to how the vehicle looks, drives, feels or sounds. But for others, it’s a pre-planned and short-lived dash that involves a preselected pile of parts all being bolted on in one fell swoop. 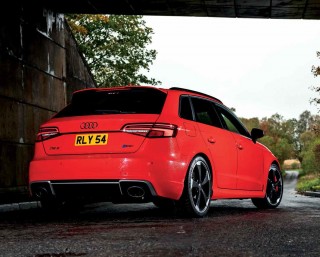 Painter Mark is one guy that’s firmly in the latter camp, if his most recent project car is anything to go by at least. Putting his 8V RS3 under the knife practically the moment he snapped it up last year, even though it’s undoubtedly a seriously impressive car in standard trim, it was never intended to stay this way. And it only takes a quick look at his automotive voyage leading up to this very point to see just why…

“I don’t even know where to start when it comes to my previous cars, but safe to say there’s been a lot of performance-focused machines in there!” Mark laughs as we delve into his colourful back-catalogue that begins with the likes of hot ‘80s Ford hatches and includes everything from tuned Japanese metal to hot BMWs and even Ferraris before we get up-to-speed.

But as much as Mark probably has a fascinating story about each of these impressive motors, it’s the car directly before this Catalunya Red RS3 here that gives us the most answers as to how his current car has taken the impressive shape it has done. “My previous car was an 8V S3 that was heavily modified,” he reveals. “It was also Catalunya Red, and featured in Performance Audi just last year!”

Boasting a comprehensive array of goodies to make it a seriously formidable hatch in its own right, Mark knew that ‘upgrading’ to the RS3 would actually involve taking a step backwards in terms of performance for a while at least, until he worked his similar aftermarket magic on the new five pot-adorned weapon. But one thing was for certain: he wouldn’t be messing around in the slightest…

“Within an hour of buying it, it was on the rollers at MRC Tuning getting its first round of upgrades,” he modestly continues, clearly holding a detailed plan of what was to be done long before actually picking up this pocket rocket.

“Within an hour of buying it, it was on the rollers at MRC Tuning” 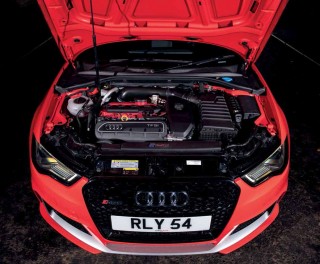 The work involved adding a raft of Stage 1-friendly hardware to the engine bay, including breathing goodies in the form of Milltek cat-delete pipes, a BMC air filter and a trick DTE PedalBox throttle software tuning unit – all of which were chosen to make the car as sharp and strong as possible when driven hard.

Tied together with one of Doug from MRC Tuning’s infamous custom Stage 1 re-maps to both the engine and gearbox’s brains, and the results are a seriously useable 432bhp and 485lb ft of torque – effortless figures for this powerplant that ensure the car’s now not only a total blast to drive, but also as safe and reliable as when it left the factory.

“It’s a lot more fun now and is already becoming the perfect weekend toy that I bought it for,” Mark tells us. “Usually I would have had more done by this stage of ownership, but I’ve been too busy with work. So, early next year I’m planning on doing more to it, with the help of Dave from DH Automotive who will help with hardware, and the MRC wizards who will tie it all together with a Stage 3 map.”

Although it already packs a whole lot more under its muscular skin, Mark’s ensured his signature style has been stuck to that he likes to stick to with every car he buys when it comes to their appearances. “I like keeping the exterior and interior as stock as possible; I just love the sleeper look!” As such, it takes just a couple of well-thought- out OEM+ tweaks to set this beast apart from the rest.

Leaving the showroom with the Aluminium exterior pack, Mark’s since replaced the window surrounds, front grille and roof bars with black items, but interestingly has chosen to keep the iconic front blades and rear valance in the stock bright silver hue to match those factory Rotor alloys. “I think the details on these parts get lost of you do them in black too, so this is the best of both worlds for me,” he considerately explains.

The aesthetic is topped off with some face-lifted head- and tail-lights; both of which feature the all-important dynamic sweeping indicators that will ensure this is one 8V that looks fresh well into 2019 and beyond. With some advanced security features also added that he understandably doesn’t want to go into too much detail on, this is one Sportback that gets pampered and used just as it deserves to by its proud owner.

Mark reveals that he’s already got a comprehensive pile of parts sitting in his garage ready for the next stage of the excitement to ensue, not least a Wagner intercooler, Milltek exhaust, Autotech fuel pump and even a TTE hybrid turbocharger – all parts that should soon see his RS3 enter stratospheric levels of performance. “You’ll probably see my doing my thing down the drag strip before long…” he cryptically hints as we wrap up our fascinating meeting. Keep your eyes peeled for that one… 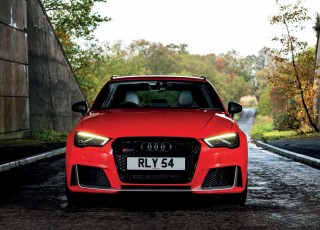 With its black Super Sports seats complete with the red stitching that comes as part of the Audi Design Pack, Mark’s taken the attention-to-detail one step further in the cabin with some custommade floor mats throughout that match the quilted leather pews. Complete with the all-important red stitching too, they’re the perfect way to complete what is already a seriously impressive cockpit to be in. 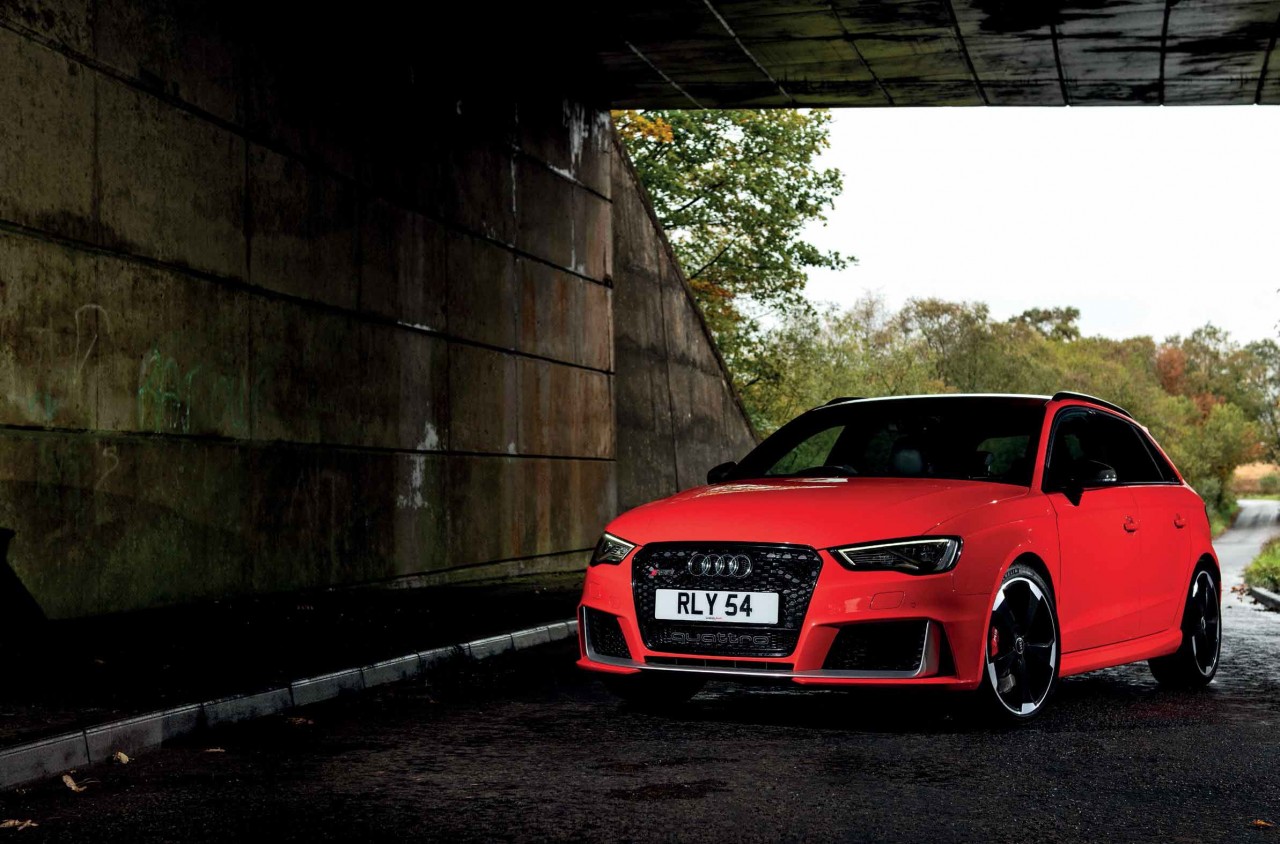 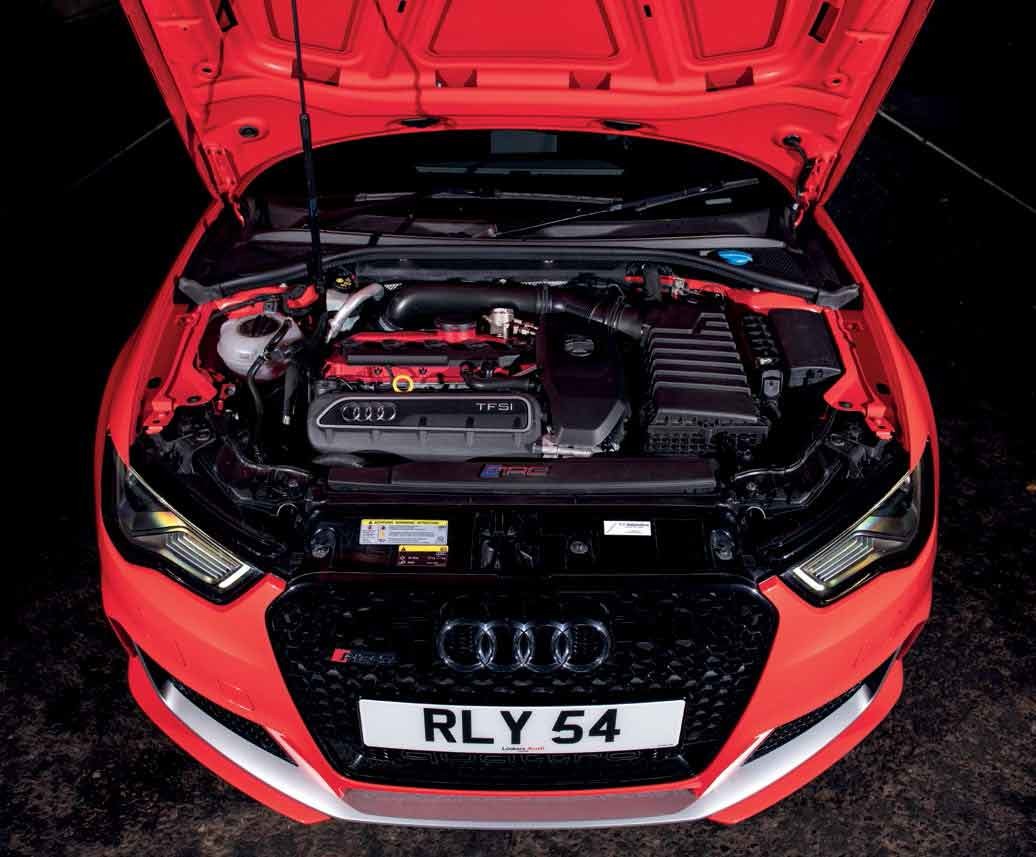 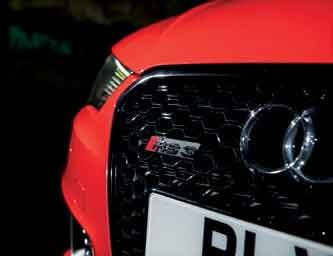 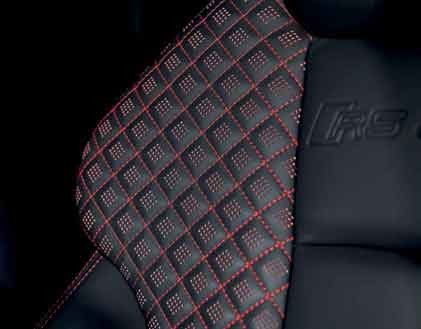 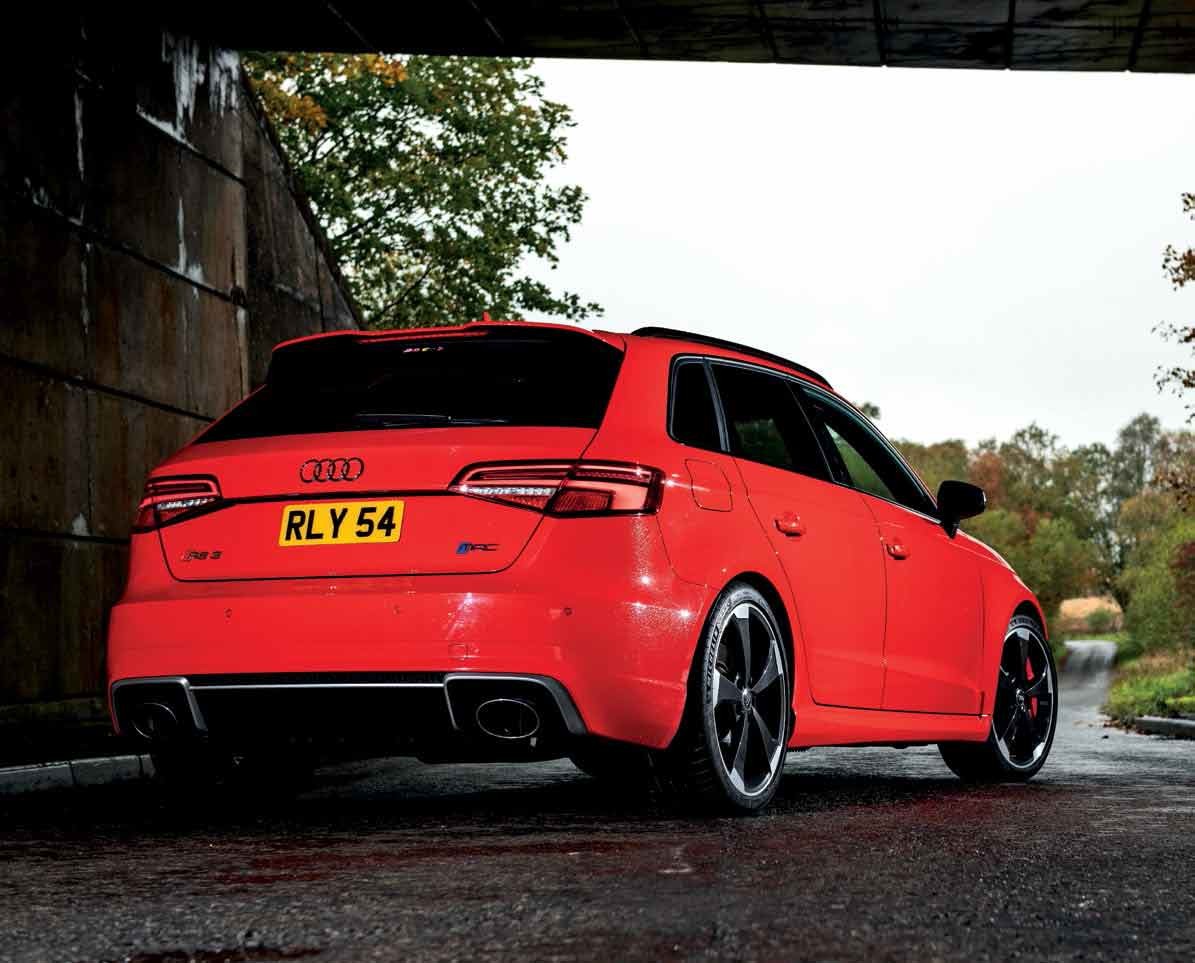 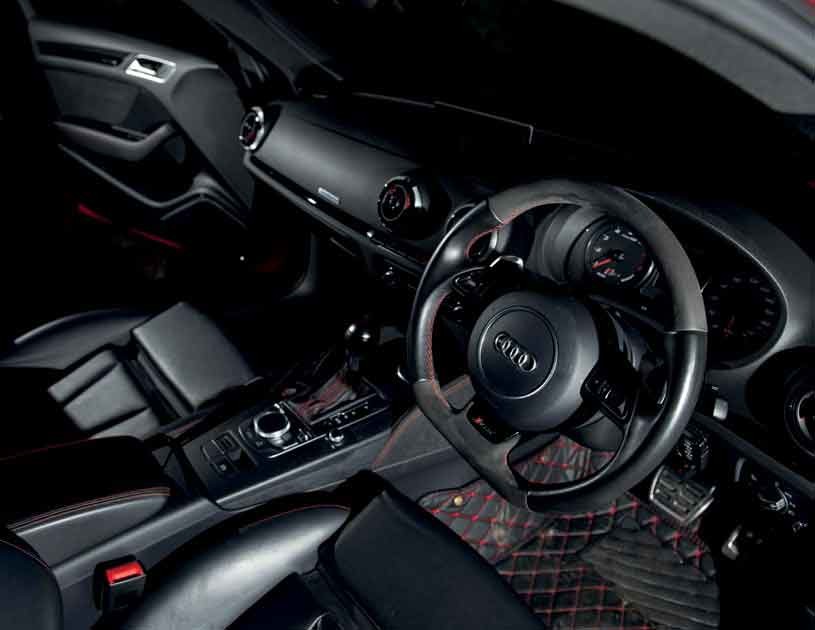 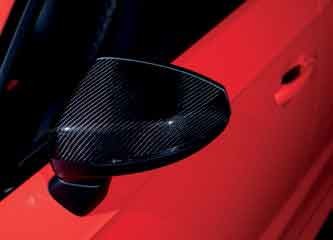 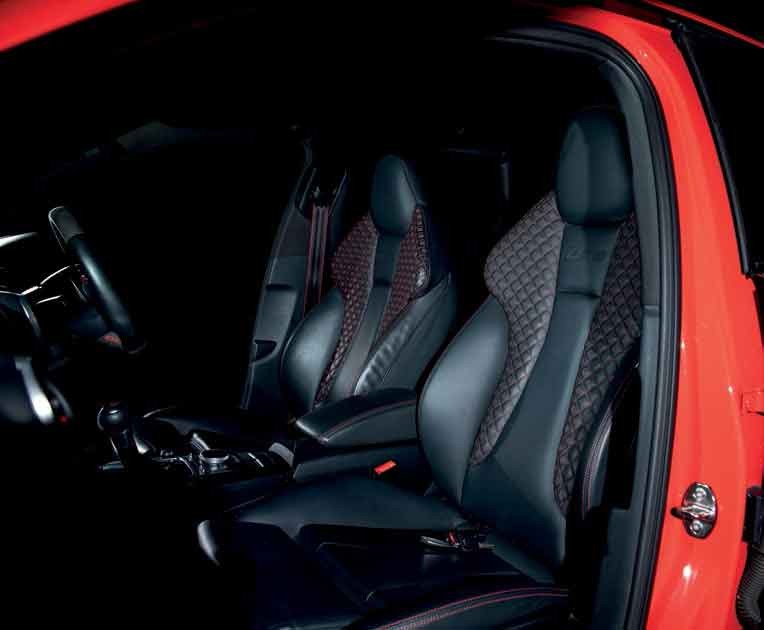 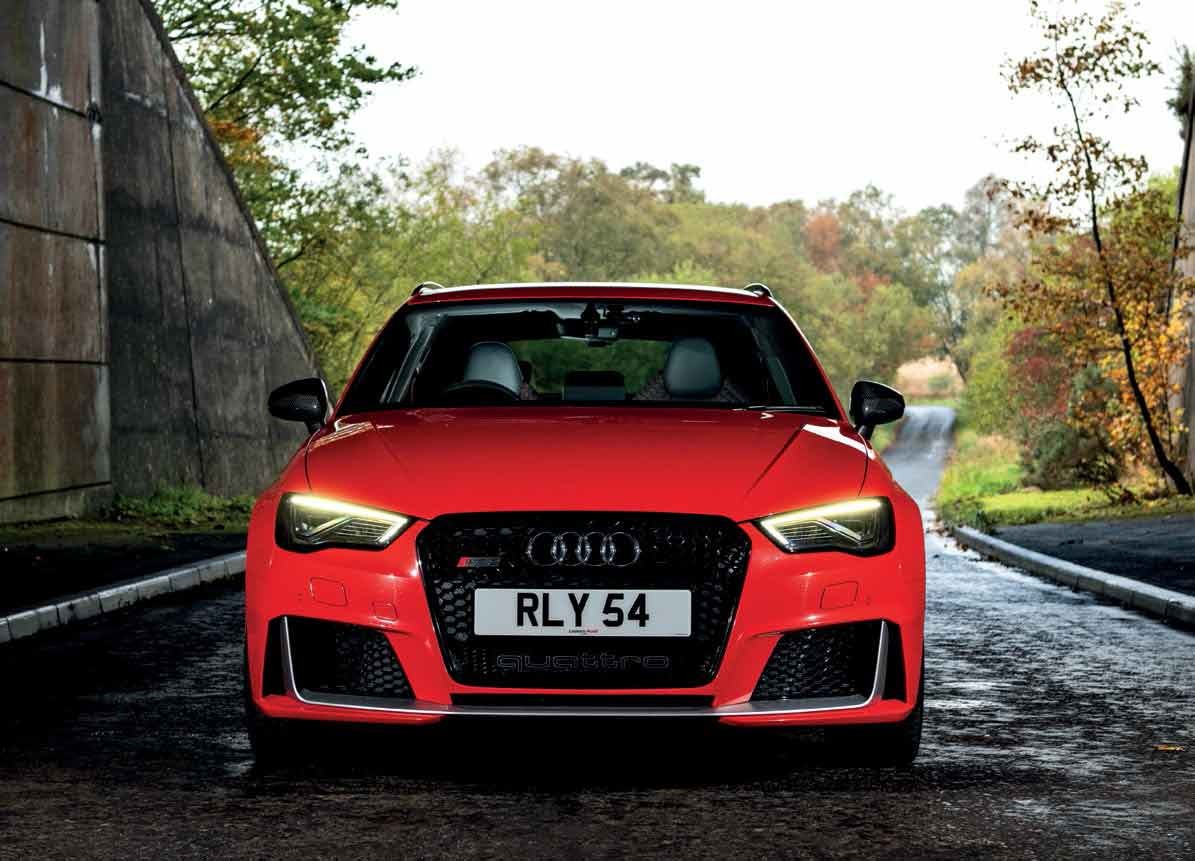 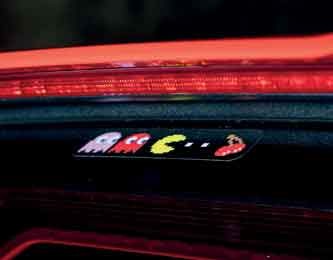 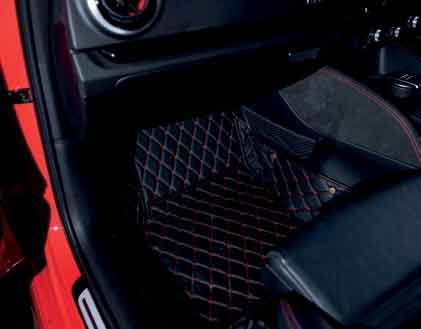