RUNNING IN THE FAMILY: PLANTED S1

They say your immediate relatives can have a much bigger impact on your thoughts, beliefs and values in life than you could possibly imagine. And for 21-year-old Connor here, there was one particular interest running through his ancestors’ bloodstreams that was guaranteed to rub off on him in one way or another. 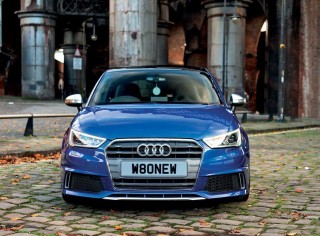 “My dad’s had over 40 hot hatches and recently converted my mum to the VAG scene too,” he grins. “Now he drives a TTRS and her a Golf R…” Combined with the fact that some of his earliest memories revolved around that distinct smell of motor oil from his grandfather’s garage, it certainly helps to explain why such an impressive slab of German metal now resides on Connor’s very own driveway, too.

And it might look the part at first glance with its gleaming Sepang Blue paint job, but peel away the shiny skin and you’ll find a seriously well-thought-out modified car – one that’s been designed to give the best possible daily driver thrills in only the most classy, reserved package you could ask for…

Toolmaker Connor’s car life began a couple of years back with a duet of SEAT Arosas, before a more pokey Ibiza FR entered the scene. But by this stage, it’s fair to say he already had his sights set to much more ambitious places altogether. “At the time, my mum owned a Sepang Blue S1 and my dad a Sepang Blue RS3,” he reveals. “You could say I was brainwashed into getting a Sepang Blue car of my own!”

Soon able to snap up this S1 in the all-important and highly sought-after hue, Connor was delighted to be behind the wheel of his very own slice of sporty Audi goodness – complete with its remarkable 230bhp, Quattro-enabled drivetrain that ensured that all sorts of hilarity would soon ensue on his local twisty B-roads. “My previous Ibiza was modified and initially I was keen to simply get a set of coilovers on the S1; it never worked out that way in the end, though!” he smiles, hinting at the comprehensive re-working that’s occurred since. 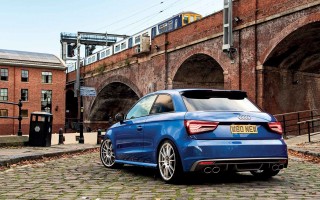 Starting with a set of KW’s top-notch V3 adjustable suspension offerings that succeeded in offering a much lower ride height and also a more competent ride to boot, Connor was so pleased with the results he soon found himself looking at other ways to complement the already-awesome looking hatch. “I’ve always liked the look of OZ Racing wheels,” he muses, justifying the quartet of sumptuous Ultraleggeras that now sit on all four corners in their bright Platinum Silver finish.

The very next week, the S1 was sent over to the lads at Newcastle-based The Exhaust Doctor for the removal of the two middle silencers for a little more growl to flow through the pipework. “After a few weeks, I started to enjoy the drone it gave off!” he smiles, the car succeeding in becoming a whole lot louder in the process. So addictive was the noise, in fact, that a custom 3in cat-back system was soon commissioned to be whipped up by the same talented firm.

Before unleashing too many power upgrades, however, Connor was very sensibly eager to improve other aspects of the Audi that would need some attention before more grunt was running through its veins. It’s why a meaty Tarox brake kit now resides on the front axle, complete with six-pot calipers and those iconic grooved discs that’ve ensured the little ripper feels a whole lot more capable when it comes to stopping power these days. 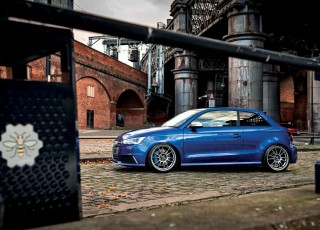 It’s this well-rounded mindset that saw further fettling of the S1’s trick new suspension taking place around this time too for optimum handling results. “The V3s are an excellent bit of kit; being able to adjust the bump and rebound means you can fine-tune the car to exactly how you want it,” he explains, soon nailing the perfect fast-road formula he was after.

A trip to his local Revolution Motorstore parts shop next saw even more goodies being snapped up for the project, this time in the form of a duo of fixed-back Cobra Nogaro Circuit bucket seats for both driver and passenger. Spec’d to a custom trim that features red stitching on the black fabric, when the pews finally arrived a month or so later and were installed, it was instantly clear it was all worth the wait. “It’s probably the best thing I’ve done to finish off the overall feel of the car! They sit nice and low and offer a really nice seating position.”

With silver wheels already added into the mix, Connor thought he’d do things a little differently when it came to the S1’s exterior aesthetic. Keen to steer away from the blacked-out look the majority opt for, he’s kept the polished trim and simply removed the ‘S1’ badging, keeping things clean, simple and suave and resulting in a look that’s sure to stand the test of time better than most. 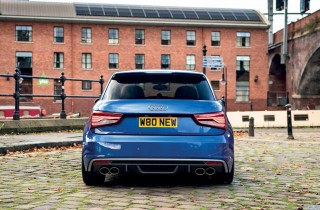 “I felt like the car was finally ready for some more power, so booked it into The Exhaust Doctor to get the system finished off with a custom downpipe,” Connor keeps us up-to-speed. “Then me and Ciaran Thompson of Revolution Motorstore began getting prices together for a full Stage 2 conversion…” Sure to offer far more power to all four wheels, the job has currently taken a back seat as Connor settles down in his very first property, but he’s keen to return to the task in hand very soon.

In the meantime, this daily-driven hot hatch has certainly served its versatile purpose extremely well indeed, being meticulously maintained to ensure it’s not only providing unending driver thrills but also winning awards at the handful of shows it’s recently been to (Connor even managed to scoop 2nd place at 2018’s VAG Tuner Live show – the moment he says he realises his car really was something rather special). With such a clever string of upgrades already applied, it’s one compact machine that’s already punching well above its weight, and it’s only going to get better from here. Just remember, you can learn an awful lot from your parents…

Thanks My friends and family, especially GC Motors in Harrogate for sourcing and supplying the car 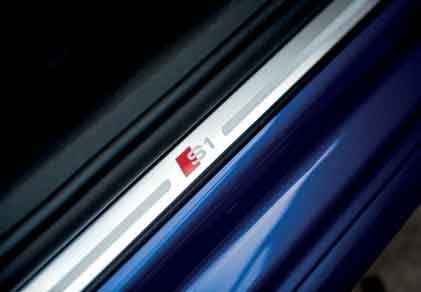 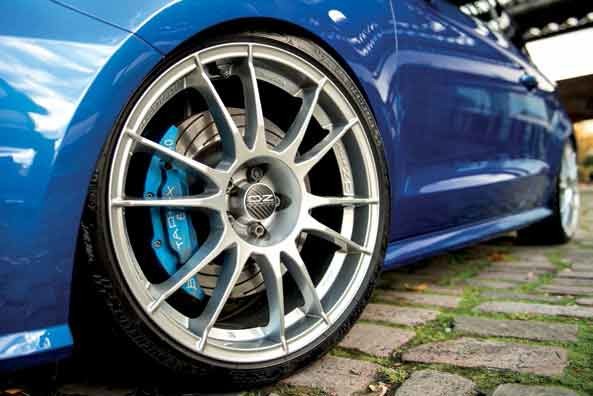 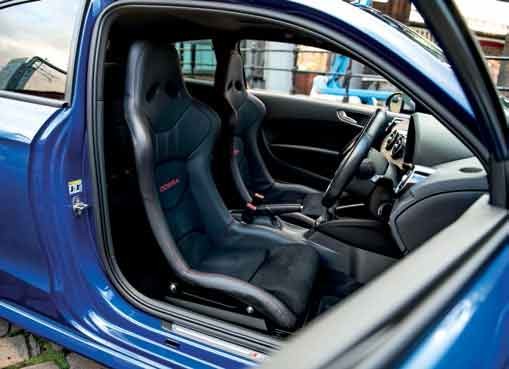 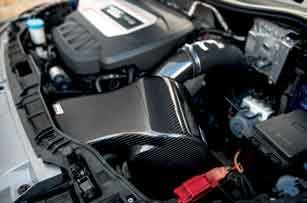 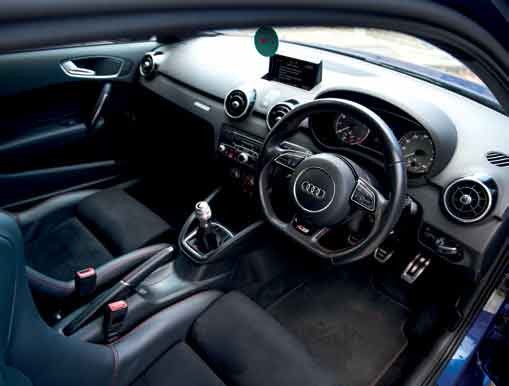 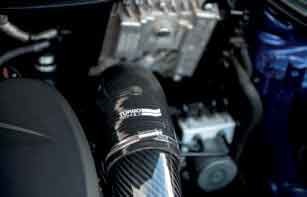 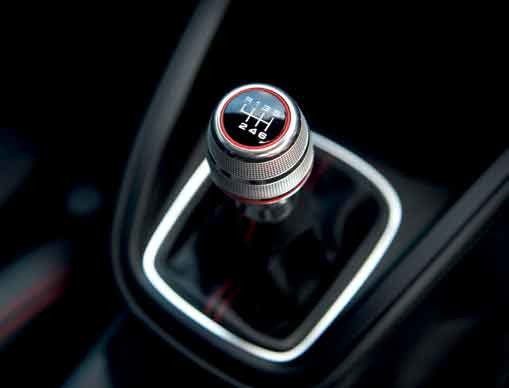 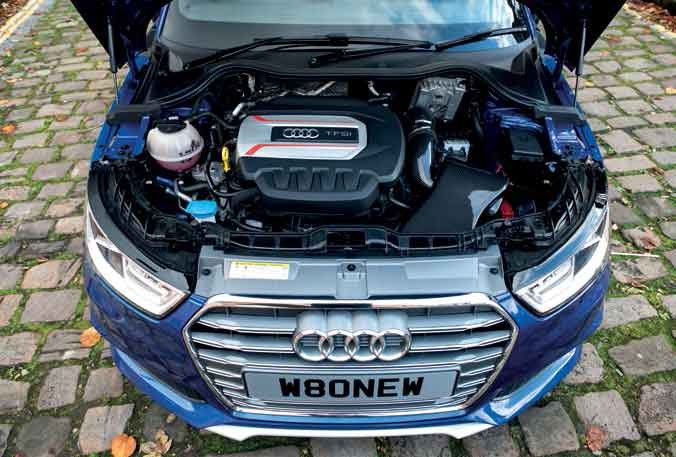 “The KW V3’s are an excellent piece of kit.. you can fine-tune the car to exactly how you want it”

With no re-map yet applied, it’s probably running close to its standard 230bhp at present, but that’s not to say things have remained completely untouched under the bonnet so far.

Connor has already added the likes of a top-end APR carbon fibre intake and Revo turbo muffler delete to that 2.0-litre TFSI lump to complement its easy-breathing exhaust system, and ensure that the power gains will come thick and fast as soon as a calibrator plugs their laptop into its OBD port. Bring it on!

Favourite upgrade? That would have to be the coilovers

Are you a member of any club? Audi S1 Owners’ Club and North East Audi Owners

Money-no-object project? Probably to continue with the S1 and make it an animal… but if it wasn’t around it’d probably have to be a Liberty Walk GT-R