V6 MGB The bonkers styling may be a little on the Japanese side, but there’s no denying this MG is as British as a Fray Bentos. Especially when it comes to the Jaguar filling. 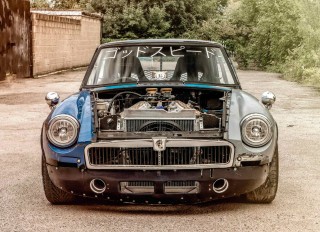 The MGB is, for many, the archetypal classic car. More affordable than an E-Type, less terrifying than a Cobra, friendlier than an SL – often referred to in breathy tones as ‘Britain’s favourite classic’ or somesuch, the MGB is every bit a part of the national fabric as the Mini, cups of tea, cucumber sandwiches, and fighting in kebab shops. Impressively, this quintessentially British sports car was produced in essentially unchanged form for eighteen years; the structure was pretty ground-breaking for 1962, employing a monocoque chassis rather than the old body-on-frame of the MGA, although it was by no means a clean-sheet design – the braking and suspension systems were developments of the MGA’s, while the B-Series engine could trace its roots back to 1947. 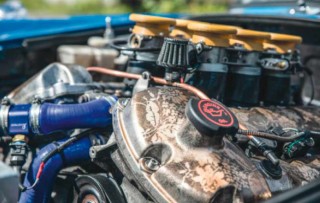 The MGB roadster was launched in 1962, and in ’1965 the coupe version appeared – the MGB GT. For this model, the basic design was reworked by Pininfarina to incorporate an airy glasshouse and a practical hatchback, transforming the B-road blaster into an intercontinental cruiser. A couple of years later, the firm attempted to take this cruiser repositioning to its logical conclusion with the six-cylinder MGC, although this wasn’t especially successful and was canned after two years, and the MGB GT V8 arrived in 1973, which rather changed the focus of the model and injected a hefty dose of adrenaline. 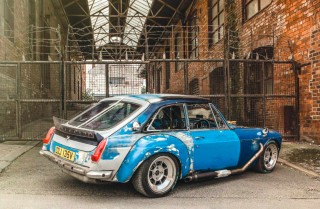 In essence then, the MGB is something which is friendly and accessible in four-cylinder form, a bit bonkers with a V8, and largely pointless with six-cylinders. Fair assessment? Possibly, but Mike Wallhead didn’t think so, which is why his 1979 MGB GT rocks a six-pot… but not in the way MG intended. And as you can see, he’s gone what you might call ‘a little a off-piste’ with some of the details too!

“I bought the car in 2012, when I was 21,” he explains. “From an early age I’d always said that there are so many cars I wanted to own, I couldn’t get caught up on the same one twice. I had already owned an MGB GT prior to this one, and was looking for another car to drive alongside a classic Mini I had at the time; I was looking at old Triumphs, as well as Japanese cars, when a chap I’d previously bought some cars from mentioned he was having a clear-out of all his cars due to losing storage. I drove down to see him and there were about five cars to choose from at prices too good to pass up – the only catch being that none of them had been on the road for five years.”

So, Mike found himself with yet another MGB and, being a determined sort of fella, he had it all fixed up and MoT’d within a few weeks. He pootled around in it for a year or so, having slammed it over some Rostyles and removed the controversial rubber bumpers, before taking it off the road to make some rather more seismic changes. The Webasto sunroof was cut out, with the roof skin of Mike’s old MGB grafted in, and all of the rot in the body was chased down and eradicated… and while the thing was in bits, he started to get funny ideas about engines. 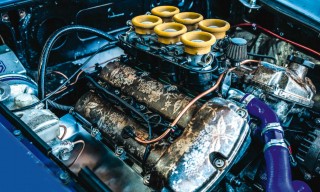 “I wanted to do something different for an engine swap, something with fuel injection and also a lightweight modern motor – with VVT ideally,” he says. “I didn’t want to go down the clichéd Rover V8 route as I’d have to modify the engine to get the power I wanted, and I didn’t want to lose any reliability or add too much cost.” After much head-scratching, Mike hit upon the idea of the Jaguar V6 – a strong, light, modern engine that makes decent power, and continues the theme of hot vee-engined MGs but with a unique little twist.

“I bought a donor Jaguar with a misfire problem, which turned out to be a faulty coil pack,” he continues. “I stripped the engine, trans and loom, and began to fit it all to the ’B. Straight away I struggled, as the angle of the vee is so much wider than that of the Rover V8, so I had to massage the trans tunnel, crossmember, sump and chassis legs slightly to get the engine to fit! Getting the inlets to fit was a whole other story too, resulting in many bonnet configurations and inlet designs over the last three years.” The ultimate solution was to fit a set of ITBs to a custom 3D-printed inlet manifold of Mike’s own design, along with 3D-printed trumpets. It’s an excellent design, and he’s keen to point out that he’s happy to supply a copy of these custom inlets if you’re working on something similar – just drop him a line via Instagram, the handle’s @mike_wallhead. 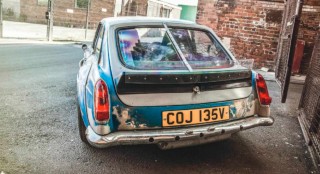 “The whole idea of cars for me is having something unique and custom that’s true to what I want,” Mike reasons. “I was brought up by my father who has very good hands-on skills with everything, his mentality has always been ‘it sucks to buy something you can make’ – a lot of that is shown in this car, with nearly every part being sourced from the scrapyard or just being things I already had that have been reused. I’ve done all the work on this car myself with help from family and friends; I studied automotive engineering at university, and currently work for BorgWarner turbochargers as a designer – and yes, I do plan to turbo the MGB at some point! The only thing I ever paid for was the remap which was done by Motoscope in Northallerton. I really can’t recommend them enough!”

The last dyno printout shows a mighty 270bhp, which is a world away from anything the MGB’s original design team could have envisaged, and since then the car’s been treated to a new inlet design, a new exhaust crossover to aid scavenging, and a few other tweaks, so it should be pushing somewhere around 300bhp. In a car that weighs just 872kg wet, you can imagine how hysterically urgent the power delivery is. 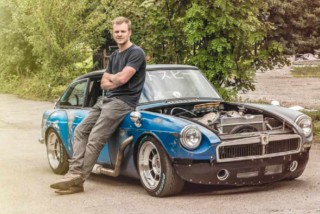 “Every single thing has been modified in some way,” says Mike. “Anything that was factory has had holes drilled in it to save weight as well as for aesthetics, down to bolts being shaved because the factory ones where too long for my liking! The hydraulic handbrake has been drilled for lightness and has a custom handle which I carved to fi t my hand from wood from the garden cherry tree, and I completely gutted the doors, they’re literally just skins now.” A few luxuries do remain in the car – y’know, like seatbelts – but for the most part Mike’s been ruthless in his quest for mass-reduction. Even the brake servo was junked as it was deemed an unnecessary extravagance, and you get the impression that he’d feel enormously guilty driving the car after a large breakfast as the second round of toast would throw the power-to-weight ratio to cock – as it stands, the bhp-per-tonne is akin to a Nissan GT-R, with 0-62mph being dispatched in around 4.5-seconds. That, in an MGB, is frankly more bonkers than most people’s brains are able to comfortably cope with. As if that wasn’t enough to bamboozle onlookers, Mike’s given the car a scrambled steampunk JDM vibe, with its fat Rota wheels and shakotan exhausts poking out of the front wings. When he does turbocharge it, Mike tells us he fancies having the turbo (or turbos) positioned outside of the front wings, which is just a magnificent idea. And the most important thing about this uniquely styled and engineered MGB is that it’s been built to be driven, and driven hard. 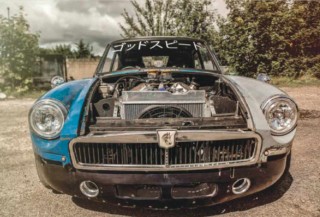 “I use the car as daily-driver over the summer,” he assures us, “and the only reason it doesn’t see quite so much use in winter is due to the light weight and wide tyres which mean it tends to aquaplane a lot. I do try to bring it out as much as possible though!” Indeed, with that sort of power and performance, why wouldn’t you? What Mike’s done here is to take an established part of the classic British firmament and refract it through a dark and distorted filter, giving it modern performance with a race car ethos and an intercontinental aesthetic. It’s like no other MGB you’ll see on the road – and you won’t see it for long, as it’s pretty bloody quick and it doesn’t like to hang about. Old school, new rules. And, in the best possible way, as daft as a brush.

Thanks: “Thanks to my friends Ben and John at Woodhead Engineering in Keighley for any machining work that I needed doing, my friends who have helped a lot over the years pulling engines in and out, and also my parents for putting up with the noise and oil stains on their driveway over the years! Without my father’s support and constant guidance I would have never have got this car where it is today.”