It doesn’t take much to make an Imp look cool, but the owner of this one has chucked everything at it anyway… and made it cooler than any Imp we could have dreamt up. Pure class! 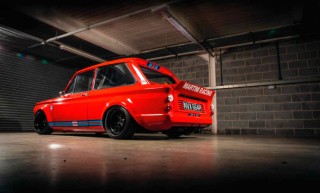 Gather round, little ones, and let me tell you a tale. It’s about the 1990s, the time of New Labour, the Britpop wars, fluorescent shell-suits, and Baddiel & Skinner erroneously suggesting that football was coming home. Your reporter had just turned seventeen and bought a Vauxhall Nova; all my friends either had Novas, Peugeot 205s, Ford Fiestas or Renault 5s – mid-eighties hatchbacks were what everyone drove. Except for my mate Pete. No, Pete bought a Hillman Imp, and was widely mocked for it. A bog-standard 1975 model, it was rusty and a bit smelly and an obvious target for ridicule… except that, as it turned out, he had the coolest ride in the school car park. It had a hole in the exhaust so it sounded like a race car, and you could run it for a week on a fiver’s worth of four-star. You could park it in a supermarket trolley bay and climb out of the opening rear window. One time he went too far up a banked verge on a single-track country lane after a lorry unexpectedly appeared, and he rolled it onto its roof… and he just climbed out, pushed it back onto its wheels and drove off again. Pete’s Imp was indestructible.

Turns out he was onto something longterm as well, as the current enthusiasm for Imps on the scene demonstrates.

This weird little rear-engined curiosity has weathered the ridicule of ages to emerge into the warmth and splendour of twentyfirst century desirability. More and more of these brilliantly strange little cars are being rescued, restored, and modified in contemporary fashion. Turns out they look pretty mean when their sills are touching the floor. 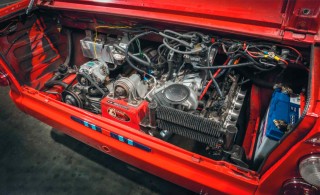 There are a few infamous Imps doing the rounds nowadays, but the one you see here is definitely an RC favourite – the race car vibe, the Martini stripes, the ultra-premium interior, the way it sits, it’s awesome . We just had to corner its owner, James Williams, to find out the full story.

“It’s the first car I’ve properly owned,” he explains. “I had another Imp before this one but never drove it, and it was in need of too much work and I didn’t have the skills. But my annual holiday as a kid was always to the Saab Owners Club weekends so I always had a love of classic cars, and I knew my first car had to be something old and different. Something that would stand out. My parents were always into Saabs but I knew the insurance would be too much, so I narrowed it down to three choices: Vauxhall Viva, Triumph Dolomite, or Hillman Imp. My dad had an Imp, and I used to play with a model one as a child so I was already swaying that way… and then one year we went to the NEC Classic Car Show, where I saw Brian Gomm’s well-known Imp and fell in love. Plus, unlike Minis, I knew I could make the Hillman a one-off!”

Solid reasoning then – James wanted a classic, but not in a cloth-cap-and-elbow-patches way. He wanted something to modify. And look, that’s exactly what’s he’s done too!

“For the first five or six years it was my daily driver!”

The car was found on eBay for a grand, which seems like a bit of a bargain given how the values are going nowadays. The engine was tired but it ran OK, the bodywork was a bit tatty but not unsaveable, and the interior only had one seat in it and nothing else, but that was alright as James is a trimmer by trade. All in all it seemed like a decent base for a project. And it’s a cooler first car than just buying an anonymous base-model hatchback, right? 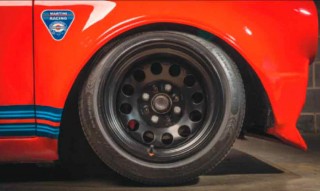 “It already had the Group 2 wide arches and front spoiler, which drew me to it as I’d never seen them on a road car,” says James. “The guy was a fellow Imp Club member who ran out of room for it.” Naturally one of the first things James wanted to do was to make it more powerful, as he’s a solid gold ledge and that’s just how he rolls. So the dinky 875cc motor was duly delivered to an ex-Rootes apprentice and renowned Imp tuner by the name of Ben Boult; he bored it out to 930cc, lightened and balanced the engine and flywheel, and slotted in some racier cams to help the teeny tearaway keep up with the traffic.

With that job ticked off the list, James was keen to tackle the car’s innards. “The seats are from a Suzuki Swift,” he tells us. “After one job at work for Fairline Yachts, we had a lot of leftover material which I used to trim these seats – it’s brown marine vinyl that changes and seems to age when stretched, and looks like a bomber jacket!” The rest of the interior has been trimmed to match – the dash, the air install, the works – and it’s probably safe to say that this is the poshest Hillman Imp interior the world has ever seen. (He’s always changing his plans though, it’s the nature of being a trimmer; don’t be surprised if this car has a Singer Porsche-style interior next time you see it…)

There’s no point having a stunning interior wrapped up in a ropey exterior of course, and James was keen to ensure that his one-off Hillman snapped as many necks on the showground as possible. Having dabbled with three or four sets of wheels, he decided upon these dishy Weller steels – and it’s worth noting that they’re 8-inches wide, which may not sound a lot to drivers of modern cars, but that’s a hell of a lot of girth to ram into a tiny Imp, even with those wider Group 2 arches. 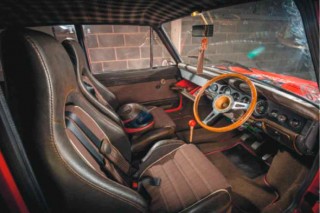 “For the colour scheme, I took inspiration from my favourite F1 car – the 1976 Brabham BT45,” James reveals. “I love the red paint with the Martini stripes, which tie in nicely as my Imp is a 1976 car, and I thought it’d be a great way to give the thing a period Touring Car vibe.” An unusual mash-up of racing formulae, but it totally works, particularly given the body treatment that was inspired by Japan’s shakotan street-racers. A good friend, Johnny Mak, made up the custom steel ducktail spoiler for the engine lid, and the slightly gawky front indicator/sidelight units have been replaced with custom round lights. “I only know of one other Imp whose owner has done this,” he says, “and they’re oval and too small – so after lots of research I found Range Rover foglights with custom LEDs in a perfect size, and Johnny nailed it again!” It was the 2017 show season that proved the turning point for the build, in two key areas, as James drew inspiration from the scene and decided to go all in with air-ride. He fitted an Air Lift Performance setup which, after years of driving a superlow, super-stiff Imp, now allows him to roll in comfort to shows before dropping it the floor. Under the instruction of Imp-customising kingpin Rob Cumberbatch, James and his mates Chris and Ben managed to install the system in a day! The other significant change around this time was the addition of fuel injection. With the car not seeing a huge amount of regular use it was becoming unreliable, but this has been rectified thanks to some more modern fuelling, a set of Suzuki GSXR-600 throttle bodies, and a Canems ECU. It now starts first time every time, and runs as sweet as the proverbial nut!

It’s fair to say that the reactions to the car are unanimously positive too, from the older drivers who used to have one to the younger enthusiasts who have seen Imps at shows and still aren’t quite sure what they are. “For the first five or six years it was my daily driver, but after getting married, buying a house and having our daughter Bella it’s become a show car,” says James. “Before that it was used for everything including holidays; me and my wife Vicky have taken it to Scotland, the Isle of Wight, Wales, Devon and more, always with the car full of camping gear. The Imp’s known as Rosie and is one of the family – often people will ask how Rosie is before they ask about Bella!” 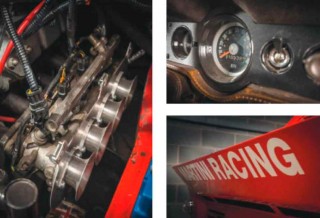 This isn’t just a cynical show project built for likes and shares, but the ultimate first car with an endearing and growing family history; sure, the classic car purists will turn their noses up as it isn’t how it left the factory, but life’s too short for that sort of nonsense. As James points out, if he’s rekindling an interest in Imps that leads to more of them being saved, that can only be a good thing. And what it ultimately proves, more than anything else, is that my old mate Pete was correct back in the nineties: Imps are cool. And James’s Martini Imp is just about the coolest of them all.

Thanks: “Barry Cole for all hours of teaching me to work on the car, allowing me to do it myself and his endless parts supply, Auto Trim Systems for all your trimming needs (and employing me!), Thrussington Garage (East Goscote) for all the help with the fuel injection and keeping it running, Rob Cumberbatch for all the help with the air-ride and advice, Johnny Mak at Merkyman for his amazing bodywork skills, Barry Cole Spares Ltd, dad and his towing skills – and for getting me into cars, and the wife for letting me out a few Sundays a year… and for still marrying me, even though Rosie the Imp comes first!”

It’s probably safe to say that this is the poshest Imp that the world has ever seen!