Yamaha Wolseley There’s one defining characteristic of a Hornet it’s designed by nature to sting like a bastid. This one is no different either, although its sting comes from a R1 bike lump.

Sometimes, the most ingenious ideas are right under your nose. Take Tom Read here and his rather epic, Frankenstein-style creation as a fine example. “I had a rusty old Wolseley Hornet lying around, and my uncle had a Yamaha R1 superbike up for sale!” He grins, explaining how this particularly mad project seemed to fall into place before his very eyes. 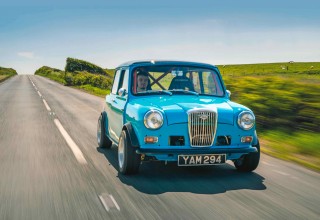 Like many of us, Tom got into old skool motoring via his dad. In this case it’s because his old man happens to have owned many classic Minis since the ’80s. So, the fact that Tom snapped up a ’1994 Mini Mayfair of his own a couple of years back confirmed that it’s a passion that’s hereditary. Needless to say, it’s become something of an obsession that’s stayed with him ever since too…

“I’ve built some off-roaders and fixed up cheap Minis, but I’ve never taken on a project this in-depth,” Tom admits. And there’s no denying that it’s been a mammoth task. Not least when his uncle’s bike quickly ended up in bits while Tom worked out just how to safely mount it all in this unlikely (not to mention pretty bloody rare) Mini-based saloon.

The story of this Hornet kicks off back in May 2015, when Tom was just 18 years old. He was looking for his next Mini project and came across this unusual gem on Gumtree. “I phoned the seller and said I would have it. I then arranged for a guy to transport it down to my home on the Isle of Wight.” It turned up on his parents’ drive one morning, without Tom even telling his dad or the rest of the family it was coming (and apparently they weren’t impressed!). Also, because Tom bought this quirky Mini saloon over the phone, he didn’t really know if it had any history, and never got to meet the guy he bought it off. Not an ideal start! Wasting as little time as possible, Tom stripped the sorry-looking Hornet back to a bare shell. He then built a jig so the Wolseley’s body could be spun 360 degrees, and took the shell off to be sandblasted. When it returned, it was time to replace rot with new metal. “First, I cut out the rusty floor and fitted a new one along with sills. Then we tackled the rear valance; I didn’t really have a choice about preserving it as it was so rotten, and the bumpers are hard to get hold of!” With a modern, bumper-less look a better prospect, this gave Tom his blank canvas. After that, it sat for a few months as he tried to find a way to sort out the buckled front panel. “I managed to get a new item made, so I put two Heritage wings on it, along with the new front, and after that it was just some other small bits of welding to tidy up the rest of the car.” 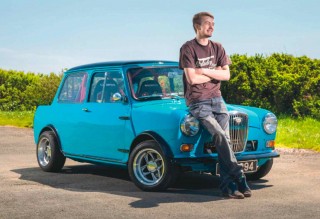 Bodywork finally sorted, Tom then set about with the far more exciting task of building up the custom front subframe, using a trick front-wheel drive bike engine kit from specialist firm, Pro-Motive. The revvy 998cc lump and gearbox – which had by this point received a Quaife ATB differential and Scottolier chain oiler – was soon slotted in place.

The suspension is made up of adjustable front arms and tie rods, with Spax coilovers to help control all the extra power. With KAD alloy front hubs, Metro ball joints, six-pot front calipers, 8.4-inch vented, grooved discs and alloy drive flanges, the stopping power has been bolstered in equal measure too. All helping to pull up those 150 rampant ponies. The idea of course, was for the entire package to be ‘simply’ bolted-in and wired up, ready to go. Luckily, things were pretty much as straightforward as initially planned. “My dad was always the one to ask for advice – I don’t think there was anything he couldn’t answer or help me with,” smiles Tom. “Although, the engine did foul the front when we first put everything in place, as it was meant for a Mini. So, I had to grind the lips off the front panel and even a bit off the bike engine mount itself. I then bolted up the rear subframe, which had been also treated to more KAD goodies in the form of rear adjustable camber brackets, alloy rear arms and a rear disc conversion.”

Then came perhaps the biggest headache of this build, and something many project car owners out there will be able to relate to — sorting out the wretched wiring. Even though Phil at Pro-Motive had converted the Yamaha engine’s wiring to help out, things still took time to get right. “I knew this was going to be painful as I had cut the old wiring loom out, so I got a nice new one, but, as it’s such an old car, there are a lot of control units for the original dash which I used none of. It just took a bit of patience.” A bit – roughly translating to quite a lot we’d imagine. 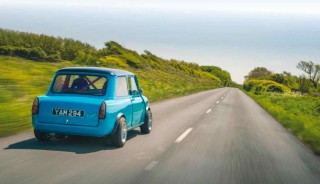 The pedal box came next, then (considering the power hike over standard), Tom thought a Safety Devices 18-point roll-cage from Mini Sport was a sensible addition. Before it all went off to paint, he also made up the Goodridge braided brake and clutch lines. Then, off it went.

Ross Wilson at A B Cook has done a top job with the bright Porsche Miami Blue, and contrasting gloss black, paintwork. So much so that Tom booked three weeks off work to carefully get it all back together. “I worked on it all day every day for two weeks, fitting up the Lexan windows and the interior. Then I started hanging the doors, boot and bonnet. Finally, it was just a tidy-up of the dreaded wiring.” It wasn’t long before it was time for a date with the MoT tester. The Hornet passed first time and was on the road by the end of that month. Spot-on!

So, after two years in the build process, what problems has Tom come up against now the he’s terrorising the tarmac? “There have been many hair-pulling moments… and there still are every now and again! It may be a Mini-based car, but there are a few Hornet parts that are not available, stuff like the rear valance and front panel.” Tom also had a brake bias problem – he didn’t have the original bias valve and aftermarket versions just didn’t seem to work on the road. “I finally managed to get hold of a Mini one to go on the rear subframe. Then, because everything in the car is solid-mounted, there’s a lot of vibration and this caused the clutch line to fracture on the slave cylinder. I solved that by making a few coils in the copper pipe, though.” 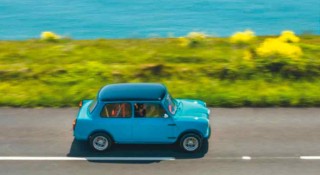 The stripped-out interior is now an extremely functional affair that makes the job of handling over triple the standard power as un-distracting as possible. It’s made up of an alloy dashboard with the Yamaha R1 instruments cleverly taking pride of place. There’s also a Sparco 300mm steering wheel, and the finishing touch (or touches – Midge), a set of bottom-hugging Cobra Monaco Pro bucket seats, with Schroth four-point harnesses.

Outside, the bright blue hue is far from subtle of course, but it works amazingly with the black roof and de-chromed details. It all seems to help bring this car bang up-to-date. It’s pretty simple on the other styling mods too. Tom has installed a stock Mini bumper at the front to go with that distinctive grille, and the only other change he’s made is fitting a set of Mini Special arches and more period-correct JBW Mamba wheels (with Yokohama AO48R tyres). Were the Mambas a nod to the Wolseley’s age? “Not really, I’ve always liked Mamba wheels, and never owned a set before. But they have nice big gaps between the spokes, which show off the KAD brakes. The wheel arches are a necessity as the rims do poke out a bit!” 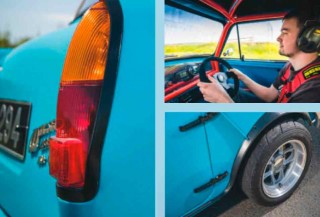 Rattling through that six-speed sequential ‘box with a huge grin on his face, it’s pretty obvious that this is no ordinary Hornet. It’s equally as clear how over-the-moon Tom is with the result. That said, he describes his Wolseley as an ‘ongoing project’, with no future plans other than taking it to some shows, sprints and track days in 2019. If you see it, we’d urge you to take a look, as there’s surely nothing else like it!

“The wheel arches are a necessity as the rims do poke out a bit!” 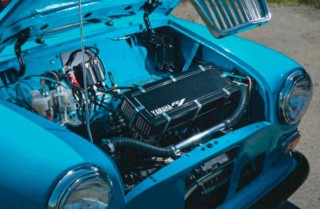 Thanks: I’d like to thank my mum and dad for their help and support. Also, Phil at Pro-Motive for his excellent help and support, which has been invaluable throughout the build

“There have been many hairpulling moments… and there still are every now and again!”