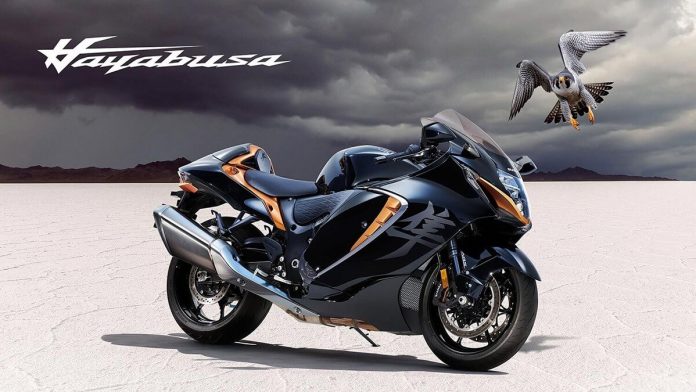 The gods of speed didn’t know what was coming until the Hayabusa made its appearance and decimated every record in sight. Such was the impact of one machine across the motorcycle industry.

Taking inspiration from one of Nature’s fastest creatures: the Peregrine Falcon; the Hayabusa was a revolution when it first came out to the world in 1999. Combining the iconic wind-tunnel-tested fairing and the monstrous 1299cc beating heart, the ‘Busa could max out at over 180 mph, making it the fastest production motorcycle on the planet at the time.

Since then, the ‘Busa’ received an upgraded power plant with more power and other minor updates while the design remained unchanged in the 2nd gen.

For 2021, Suzuki brought back the legendary Hayabusa, highlighting an all-new design and one of the most comprehensive electronic packages in its line-up.

The engineers at Suzuki looked at various other engine configurations for the 3rd gen motorcycle but decided to stick with the tried and tested 1340 cc Inline-four engine. However, due to updates to Euro 5 spec, it loses out on peak power and torque [ 188 hp at 9,700 rpm & 113 lb-ft at 7,200 rpm ]. Still, there is a significant improvement in power delivery across the rev range, specifically in the low-end and midrange.

The wizards at Suzuki made a whole host of enhancements to the powertrain. For starters, they used a special electrochemical coating in the cylinder bay to reduce friction and improve heat dissipation under load. Moreover, newly-designed 3-ring aluminum-alloy slipper pistons, lighter connecting rods, and a lighter crankshaft with new crankcases having free-flowing oil passages contribute to lower internal vibrations, thus increasing engine durability.

Other changes include revised camshafts with cam profiles, iridium spark plugs for longer durability, and a new intake system with larger 43 mm throttle bodies complemented by four additional side feed fuel injectors. As a result, the engine produces more power in the low-end and midrange.

Furthermore, the traditional mechanical throttle has given way to an all-new ride-by-wire throttle system. It should be similar in feel to the old one while also supporting features such as launch control and lift control.

Suzuki also revised the six-speed, close-ratio, constant mesh transmission for a better shift feel. It also modified the gearshift cam, endplate, and stopper to support the bi-directional quick-shift system. The rider can configure the system in terms of feel and response on the dash. It also gets the slipper clutch or, as Suzuki calls it – Suzuki Clutch Assist System (SCAS). The SCAS helps control aggressive downshifts and provides an easier clutch lever pull.

Last but not least, the latest ‘Busa receives a redesigned free-flow dual exhaust system that changes color on the end pipes depending on one’s riding style and delivers an even more raucous exhaust note. 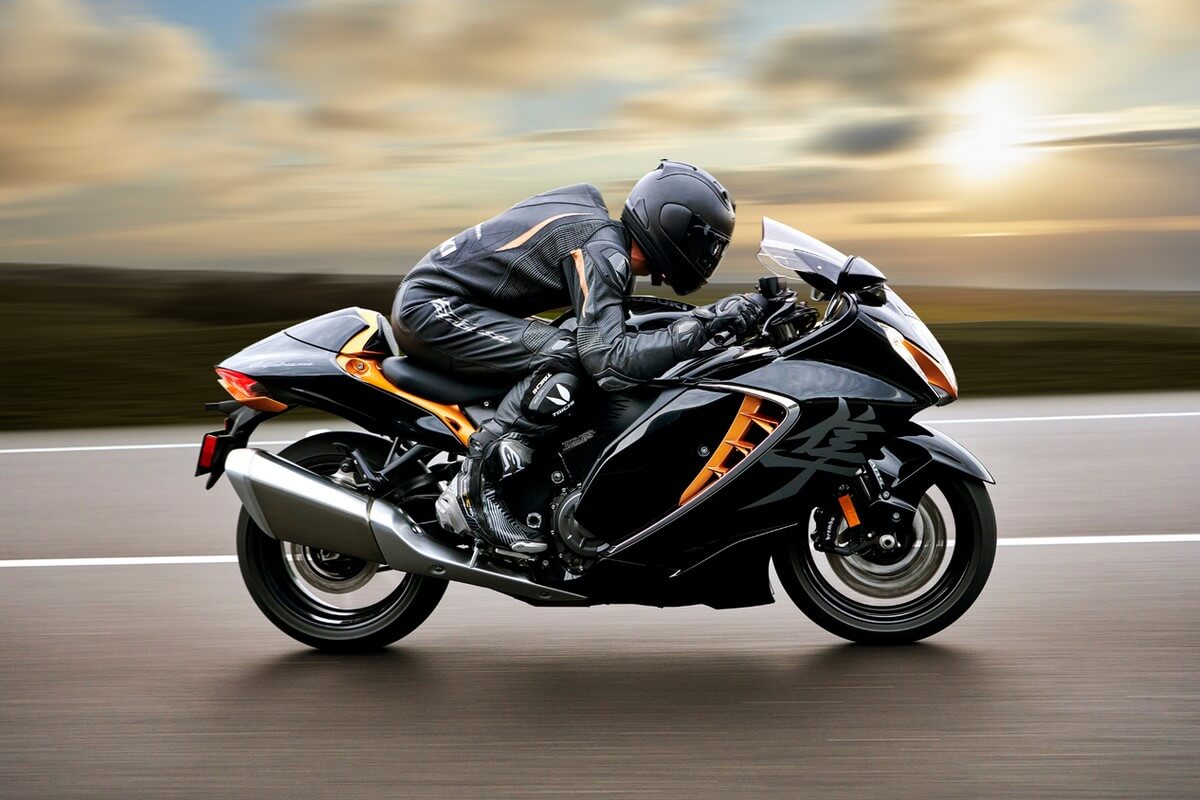 The latest Hayabusa looks even sharper and more aggressive, all while embracing the original bike’s silhouette.

Starting from the front, the bike gets an all-new LED headlamp flanked by two angular-position LED strips on either side surrounding the redesigned air intake. As an additional touch, the position lights also double up as integrated indicators. It also gets a taller windscreen that offers enhanced wind protection while sitting upright or tucked down.

The redesigned side panels are part of Suzuki’s aggressive design language all across the motorcycle. Moreover, the chrome moldings on the cowling expose the engine bay’s vent openings and help direct heat away from the rider. In tune with the updated design, the Hayabusa kanji and name logos receive a font change and a fresh restyling to emphasize a greater sense of speed.

Meanwhile, the sharp stainless steel exhausts are angled upwards and mounted on either side to give the hint of a monster ready to be awakened.

The tail section has also gone through a styling exercise fitted with all new LED combination lights with running, braking, and indicator functionalities. 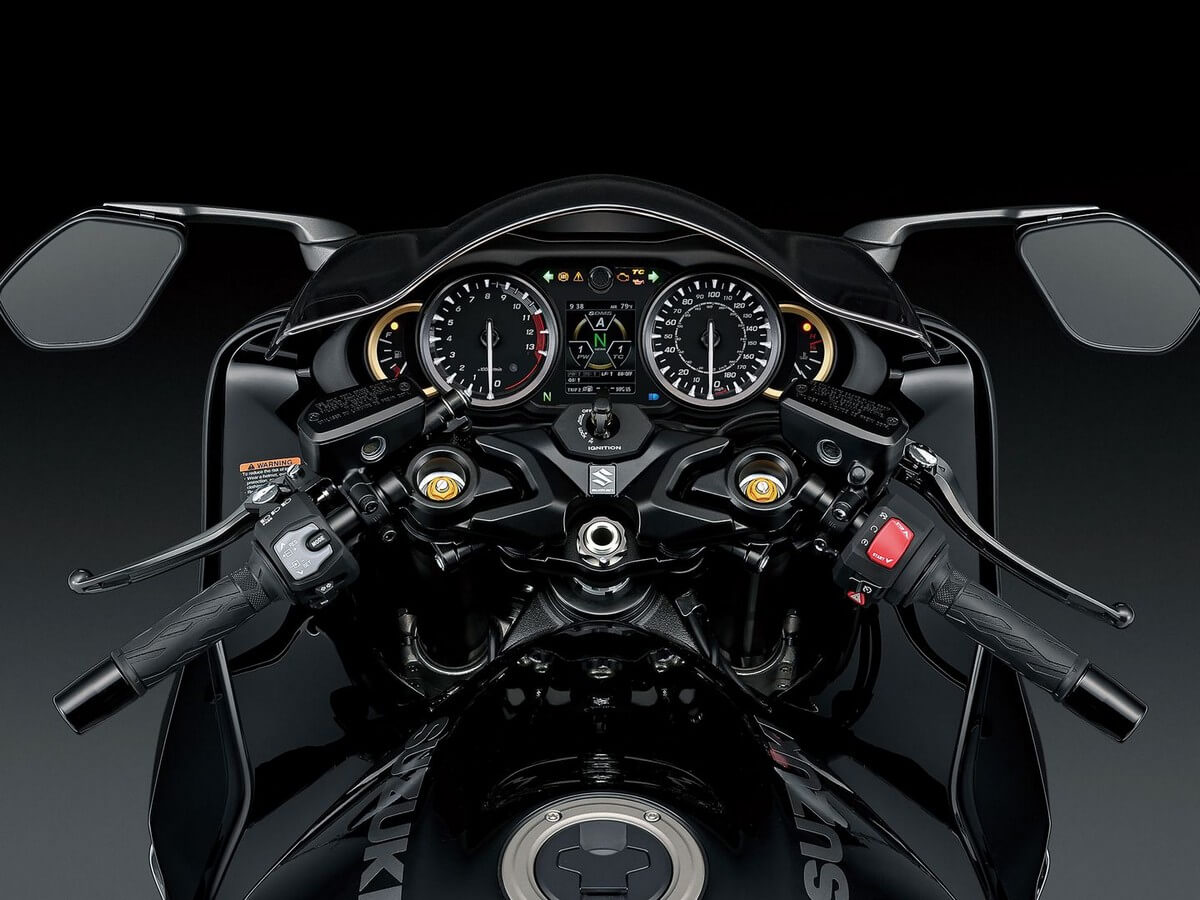 Suzuki bestowed the 3rd gen Busa with the most comprehensive line-up of electronic aids tailored to the rider. Dubbed the ‘Suzuki Intelligent Ride System (SIRS),’ it is accessed via the array of buttons on the handlebar’s left-hand side.

The bike retains the analog instrumentation layout of its predecessors with the tachometer and speedometer. However, now Suzuki added a centrally mounted TFT LCD color panel that displays a plethora of settings offered by SIRS and real-time telemetry of various parameters such as front and rear brake pressure, rate of vehicle acceleration, or deceleration, and the current throttle position.

The ergonomics are made even easier with the handlebar set 12mm further towards the rider. Adjustable brake and clutch levers are also part of the equation.

Moving on to the motorcycle’s electronics and safety features, an advanced six-axis Inertial Measurement Unit (IMU) combines a gyrometer and an accelerometer to measure pitch, yaw, and acceleration in all three axes. It supports features such as Hill hold control, Lift Control, Launch Control, Motion Track Brake System, etc. The IMU works in tandem with an ABS developed by Bosch.

The Suzuki Drive Mode Selector Alpha (SDMS-α) allows the rider to select between three preset riding modes and three user-defined riding modes to deliver a tailored riding experience. In the preset modes: Mode A is for sporty use and unlocks all of the bike’s capabilities; Mode B is for general-purpose riding and limits the engine’s power and features; Mode C is for comfort or touring purposes.

The user-configurable riding modes allow riders to set up their motorcycle with tons of customization. These include, but are not limited to Traction Control System (10 levels + Off), Engine Power Modes (3 modes), Bi-directional Quickshifter (Two modes + Off), Anti-Wheelie Control (10 modes + Off), Engine Braking Control (Three levels + Off). It also gets a Launch Control System that limits the engine to 4,000, 6,000, or 8,000 RPM depending on the rider’s skill and bravery.

Suzuki also listened to the touring enthusiasts and offered the Busa with a cruise control system. It allows riders to use it from as low as 20 mph and up to 125 mph. 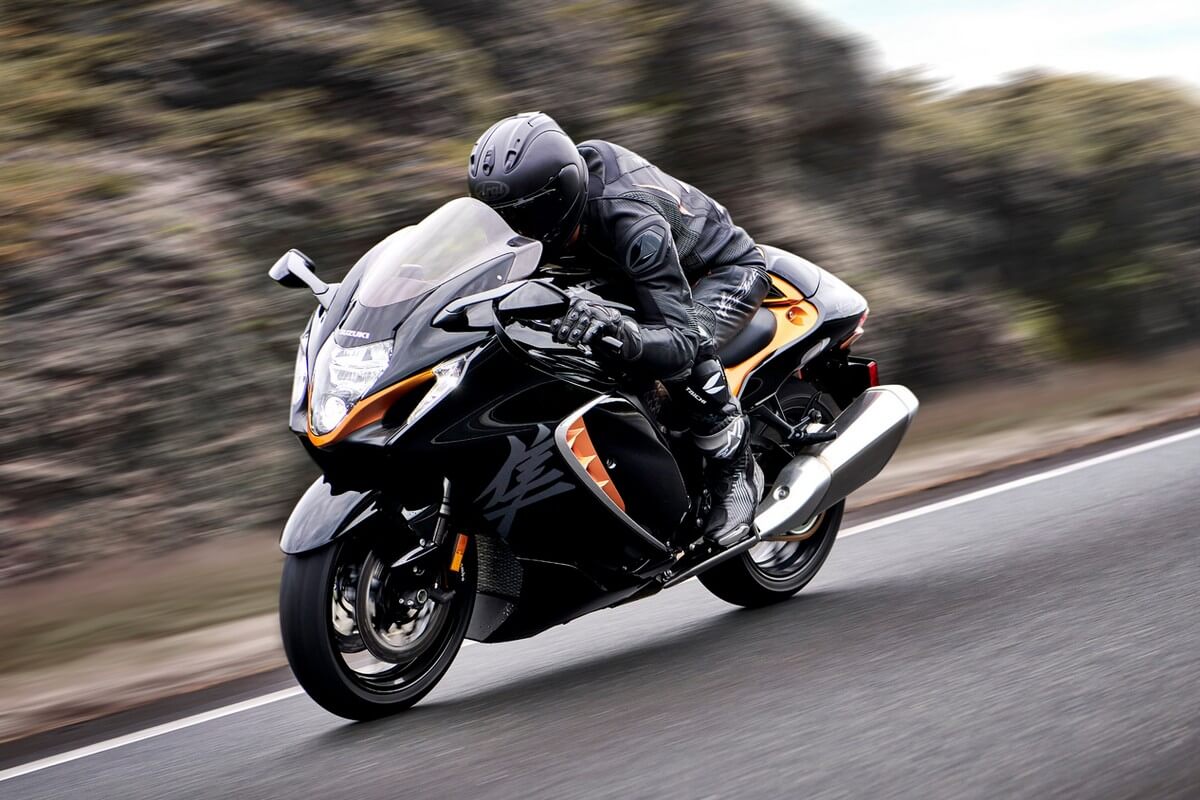 Suzuki preserved the original twin-spar aluminum frame configuration and the aluminum swingarm. However, it modified the extruded aluminum sections to improve overall stiffness and rigidity without compromising handling. The Busa also gets a redesigned subframe with rectangular steel tubing that shaves off 1.5 lbs and supports a larger load-carrying capacity.

Furthermore, there is a set of 43 mm KYB inverted cartridge forks with a revised internal structure. Notably, it has Diamond-Like Carbon (DLC) coated inner forks to reduce friction and improve damping characteristics. The rider can also adjust compression and rebound by turning a few screws on the handlebar. Also, at the back, there is a fully adjustable KYB rear mono-shock. Suzuki also threw a steering damper into the mix to help absorb sudden shocks and undulations and keep the bike stable.

Meanwhile, Suzuki’s Combined Braking System takes care of stopping the beast. It pairs with top-shelf equipment such as the Brembo Stylema ® 4-pot monobloc calipers with twin full floating 320 mm steel discs at the front and a single pot rear brake caliper with a single 260 mm disc at the rear.

The Hayabusa sits on a set of seven-spoke cast aluminum alloy wheels with Bridgestone Battlax Hypersport tires with a 120/70 R17 contact patch at the front & 190/50 R17 at the rear.

Suzuki offers a bunch of customization options to owners looking to accessorize their prized possession even further.

In terms of looks and comfort, you get a color matching single-seat cowling, Hayabusa and Suzuki logo decals on wheel rims, Billet finished brake and clutch levers, a special rider’s seat with additional foam and padding for increased comfort, and multi-level heated grips to provide comfort during winter rides. The grips work with the CAN-style wiring harness on the motorcycle.

The 2022 Suzuki Hayabusa starts at $18,599 at Suzuki showrooms with an additional $395 charge if you wish to get doorstep delivery.

The Hayabusa will always remain an icon in the motorcycling world, and the latest generation is no exception. Despite the emission norms restricting its performance, the bike is a step above its predecessors in all aspects.

The latest styling with the aggressive lines and contours certainly finds its place in the contemporary while also deriving inspiration from its past iconic aerodynamic design. Besides, the improved low-end and midrange response of the engine makes it more sprightly off the line, yet also versatile and accessible to other riders thanks to the arsenal of electronic aids onboard.

2021 MV Agusta Dragster: Everything You Need to Know