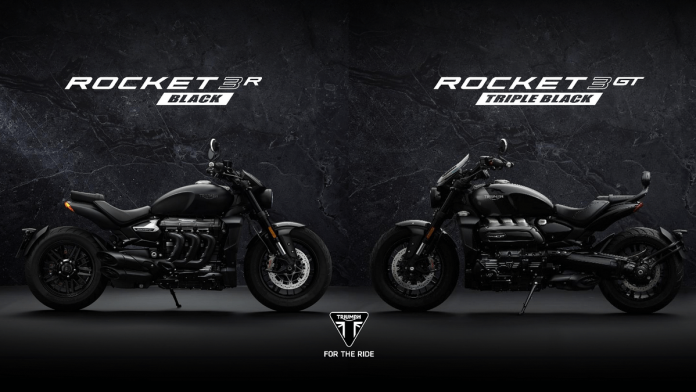 Motorcycles come in various shapes and configurations. There are small motorcycles, big liter-class motorcycles, and then you have the Triumph Rocket 3 R. Triumph unveiled the current generation of the Rocket 3 back in Dec 2019 and left reviewers and journos across the world in shock with the range of upgrades and the level of sophistication.

For 2021, Triumph bestowed the Rocket 3 with a limited edition Triple Black Paint scheme with the same internals underneath. We’ll discuss this in further detail in the upcoming sections.

The Rocket 3 ‘R’ & ‘GT’ trims share a common powertrain underneath. Triumph leapfrogged itself with the largest production motorcycle engine globally: 2500 cc’s over the previous 2200 cc’s. Along with the bump in displacement, the engineers at Hinckley managed to shed 37 lbs in the engine bay over its predecessor. The motorcycle now produces class-leading 165 hp at 6,000rpm and a mammoth 163 lb-ft of torque at 4,000 rpm.

All this power goes through a six-speed helical gearbox with a ‘Torque Assist’ hydraulic clutch, which can be fitted with a quick-shifter as an optional accessory. Then, it goes to the rear wheel via a longitudinal shaft drive.

Triumph gave the Rocket 3 the limited edition treatment with only 1000 examples of each of the R & GT variants globally. Upping the exclusivity game, each Black edition Triumph will receive a Certificate of Authenticity and a customizable motorcycle VIN for each bike.

Moreover, for an already incredible-looking motorcycle in the flesh, the attention to detail has been taken to the upper echelons, giving it an even more menacing appearance. Common between both variants is carbon fiber front mudguard, completely blacked out exhaust fenders, heat shields, end caps, and an exquisite crinkle back powder coating on the engine’s intake covers. Besides, Triumph further enhanced the bike with the front mudguard holders, headlight bezels, fly-screen, radiator cowl, and so on. 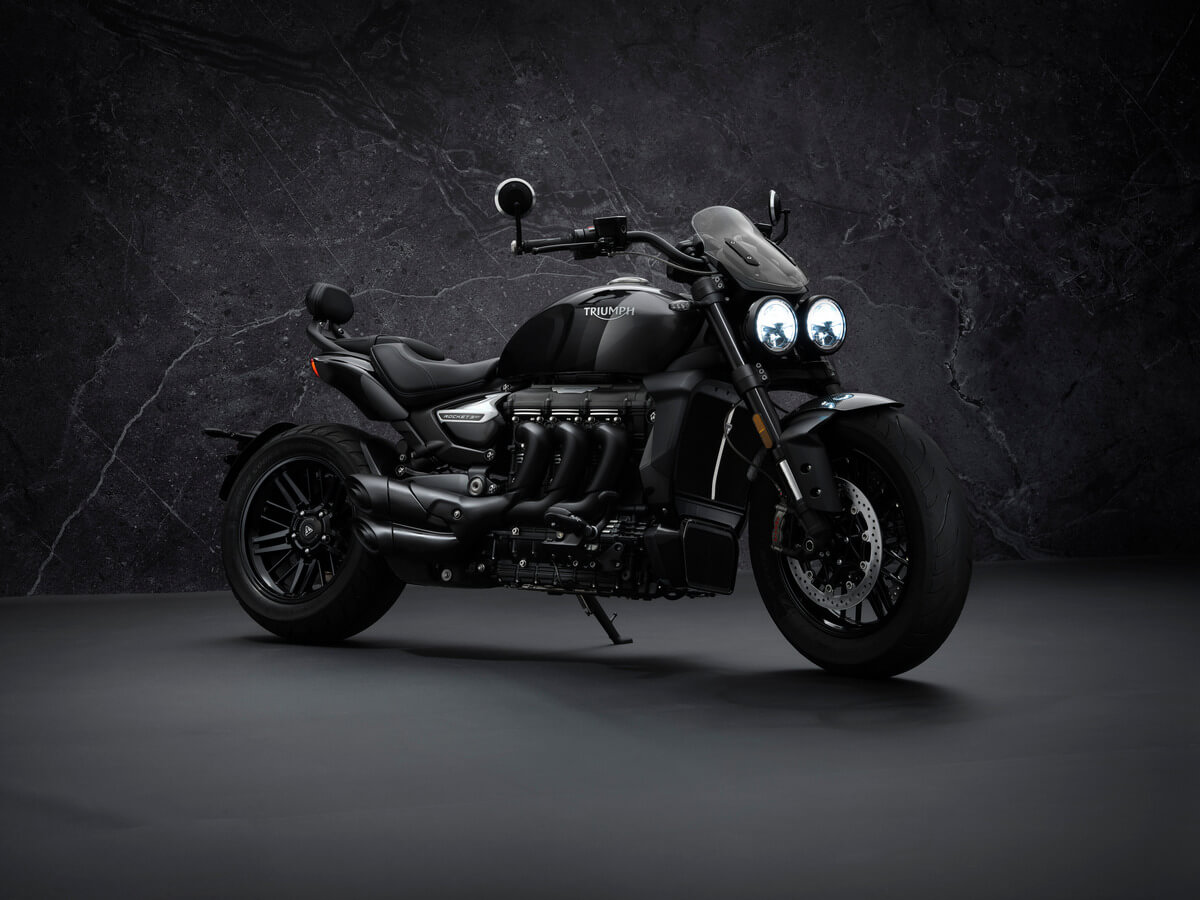 Triumph hasn’t skimped out on even the smallest of details and managed to put the cherry on top with the black anodized paint job and a super premium machined aluminum finish on the bar-end mirrors.

All the similarities aside, the main differences between the R & GT variants include a slightly sportier stance for R with the mid-positioned footpegs, wide handlebars, and a matte black livery with a blacked-out Triumph logos and a glossy white stripe running down the center of the fuel tank.

Meanwhile, the GT variant has more relaxed ergonomics for the rider & pillion with forward-set footpegs, an adjustable windshield, an easy-to-reach handlebar with heated grips, and an adjustable backrest for the pillion. Furthermore, it gets a unique triple black paint scheme with varying gradients of black on the fuel tank to distinguish itself from the sporty sibling.

Being the top of the line model in Triumph’s line-up, the manufacturer fitted a whole suite of electronics to enhance the riding experience and allow the rider to tailor the machine to his style. Notably, an advanced 6-axis Inertial Measurement Unit (IMU) measures the roll, pitch, yaw & acceleration rates of the bike in real-time and unlocks features such as Lean sensitive traction control and cornering ABS keeping the rider in safe hands at all times. 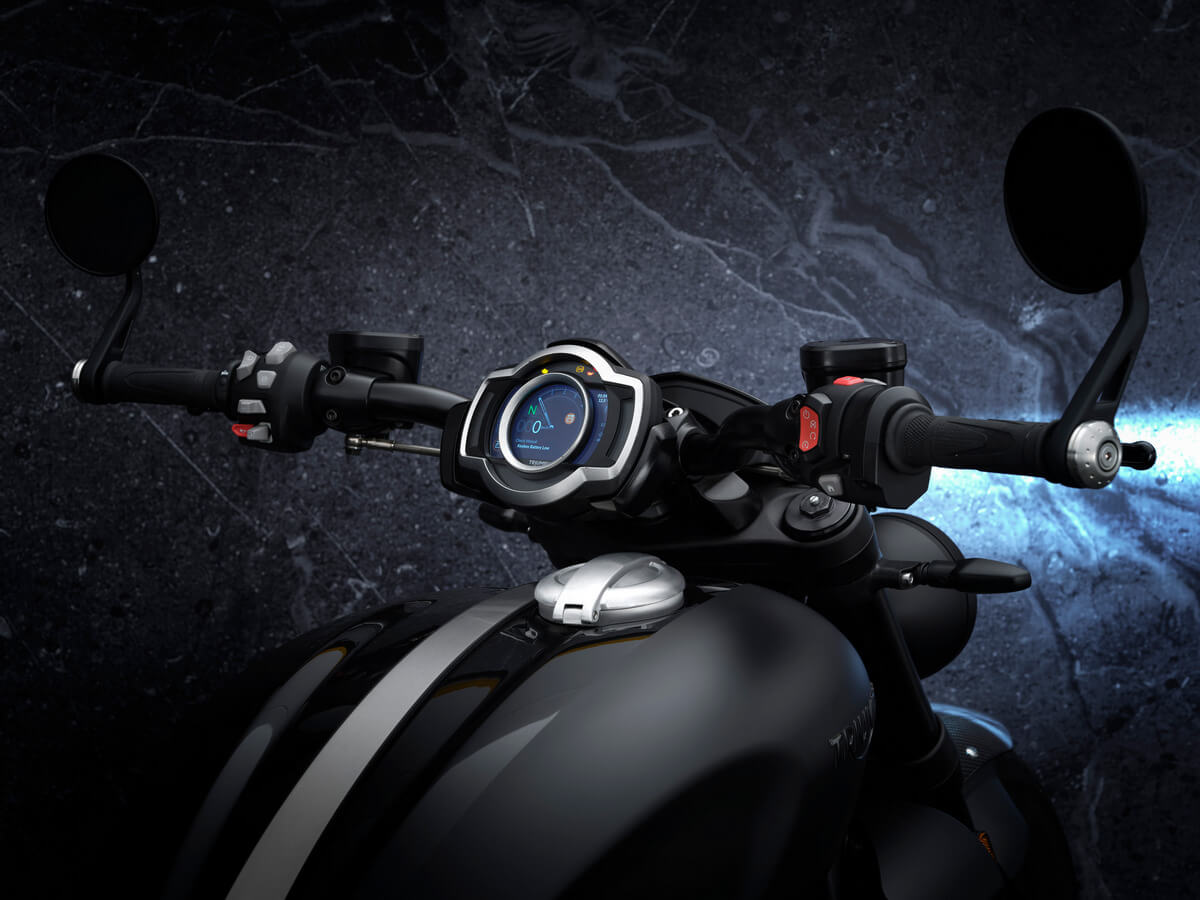 The Rocket 3 also features a full-color TFT display instrument cluster. The system comes preinstalled with Triumph’s proprietary My Triumph app with support for smartphone music, calling, & navigation controls. Unique to Triumph motorcycles, you also get GoPro controls. Using them, the rider can navigate through the software with the illuminated tactile switches on the handlebars.

Furthermore, there is LED lighting all around with twin LED headlamps with integrated DRLs, LED tail lights, indicators, and a number plate light.

Taking the extremes even further, both Rockets get an advanced lightweight aluminum frame. Meanwhile, the suspension features Showa’s monoshock RSU with a piggyback reservoir at the rear and a massive 47mm Showa USD front forks with compression and rebound damping.

With all the oomph on board, you need an equally impressive braking system. hence, stopping power comes from Brembo Stylema ® radial monobloc 4 – piston calipers with two 320 mm dual discs and a never-before-seen four 4-piston Brembo caliper with a single 300 mm disc. 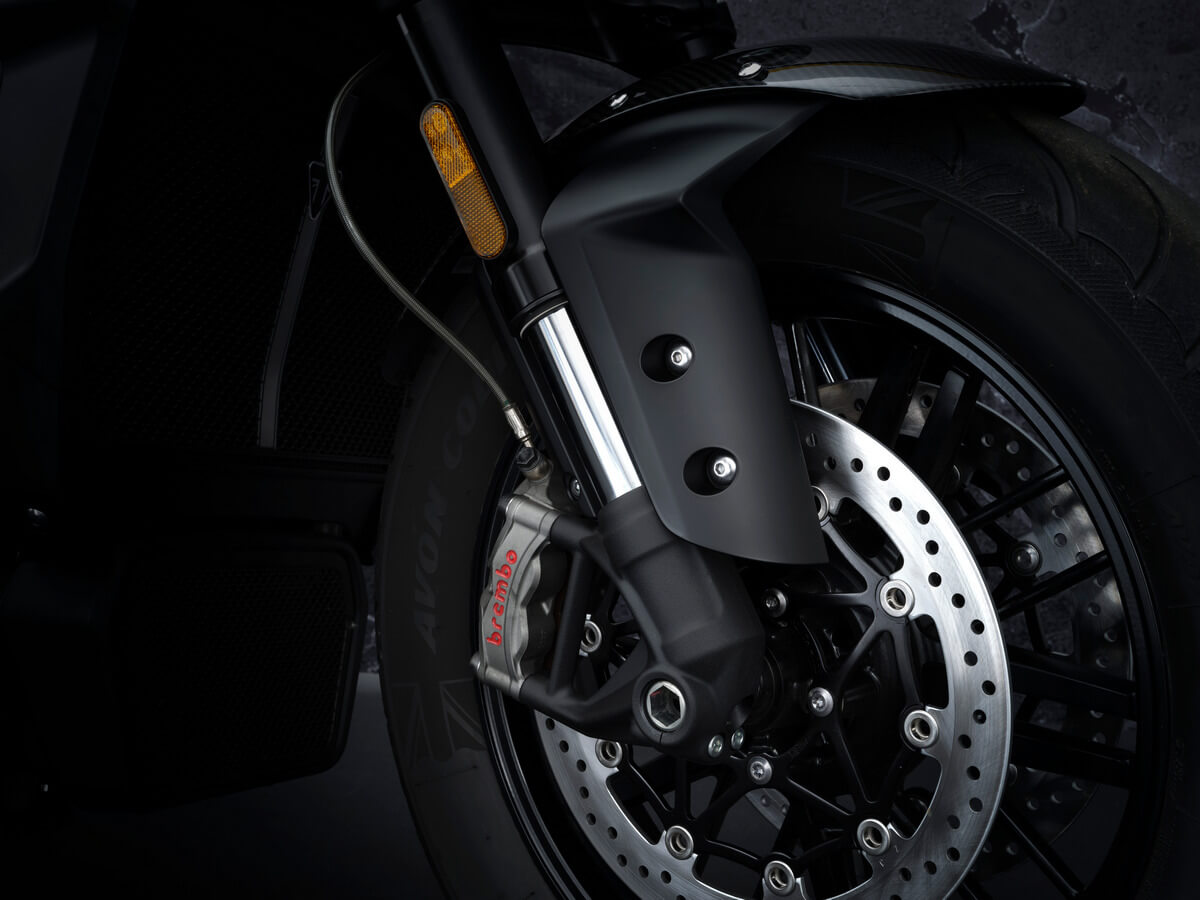 Phew! Now that is some equipment to give you a one-of-a-kind riding experience on the road.

Another difference between the two variants is that the R sits at a fairly low 773 mm, whereas the GT is even lower at a 750mm seat height.

True to its name, the Rocket 3 is a monster of a machine and one of the fastest-accelerating bikes on the planet, with 0-60 mph arriving in just 2.73 seconds and topping off over 150mph. The bike has an 18L fuel capacity with an average fuel economy of 40.4 mpg. 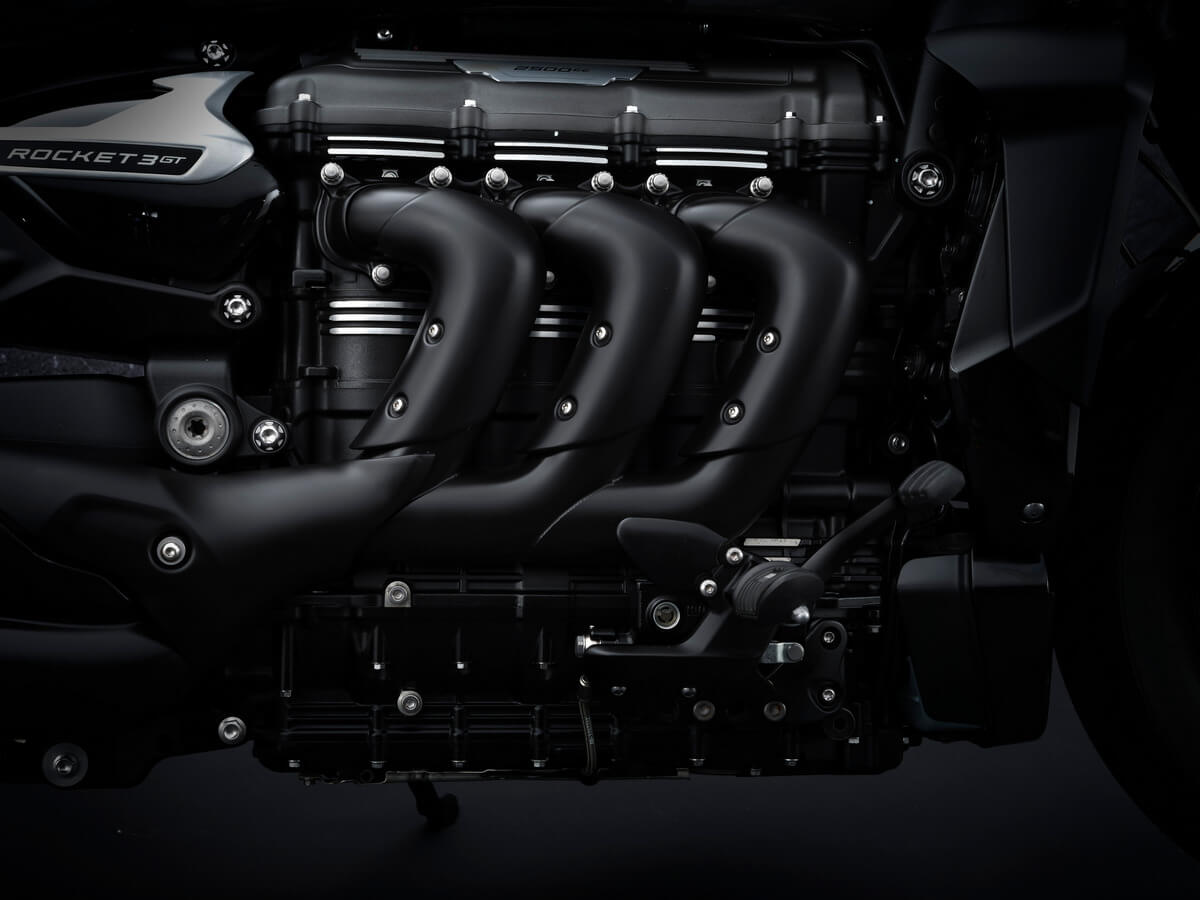 Triumph has a range of genuine accessories on offer to allow riders to customize their Rocket 3s’ according to their preferences.

The list starts with Triumph Shift Assist (up and down quickshifter), heated grips (standard on the Rocket 3 GT), and a unique Tire Pressure Monitoring system for the R & GT models.

The Rocket 3 is a behemoth in its own right. It houses the biggest production motorcycle engine globally, which also happens to be the torquiest one ever.

While that on its own comes with massive bragging rights, owning a limited edition Rocket 3 Black gives the bike the menacing silhouette it deserves while raising the bar of exclusivity to a whole new level.

The Rocket 3 is classified as a power cruiser, meaning that it can take on city roads fairly comfortably while also having more than enough oomph for some spirited riding on twisties and highways. The only competitor to the Rocket 3 in this category and price segment is the Ducati Diavel 1260.

2021 MV Agusta Dragster: Everything You Need to Know

2022 Suzuki Hayabusa: Everything You Need to Know | In-Depth Review