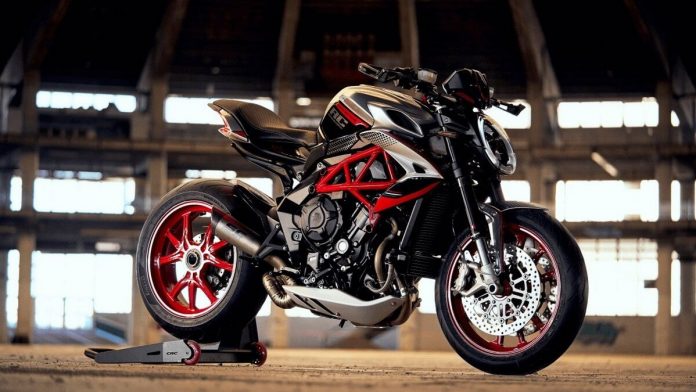 Every creation from the MV Agusta stable carries a hidden purpose. Each model is a manifestation of the fusion between design and engineering perfected over the years by the Italian manufacturer from Varese. From the top-of-the-line F3 superbike to the Turismo Veloce, Brutale, and Dragster range of motorcycles, MV has something in store for all classes of riders.

The Dragster came as a new addition to the MV Agusta family in 2014 and catered to a set of motorcycle enthusiasts who were on the lookout for an even more menacing stance and an exhilarating feeling. Hence, MV earmarked certain design elements to set it apart from its other sibling, i.e., the Brutale.

For 2021, the Dragster gets a Euro 5 update along with other minor tweaks and improvements from its predecessors. It has four variants: Rosso, RR, RR SCS, & RC SCS, each of which will be discussed in greater detail in the upcoming sections. 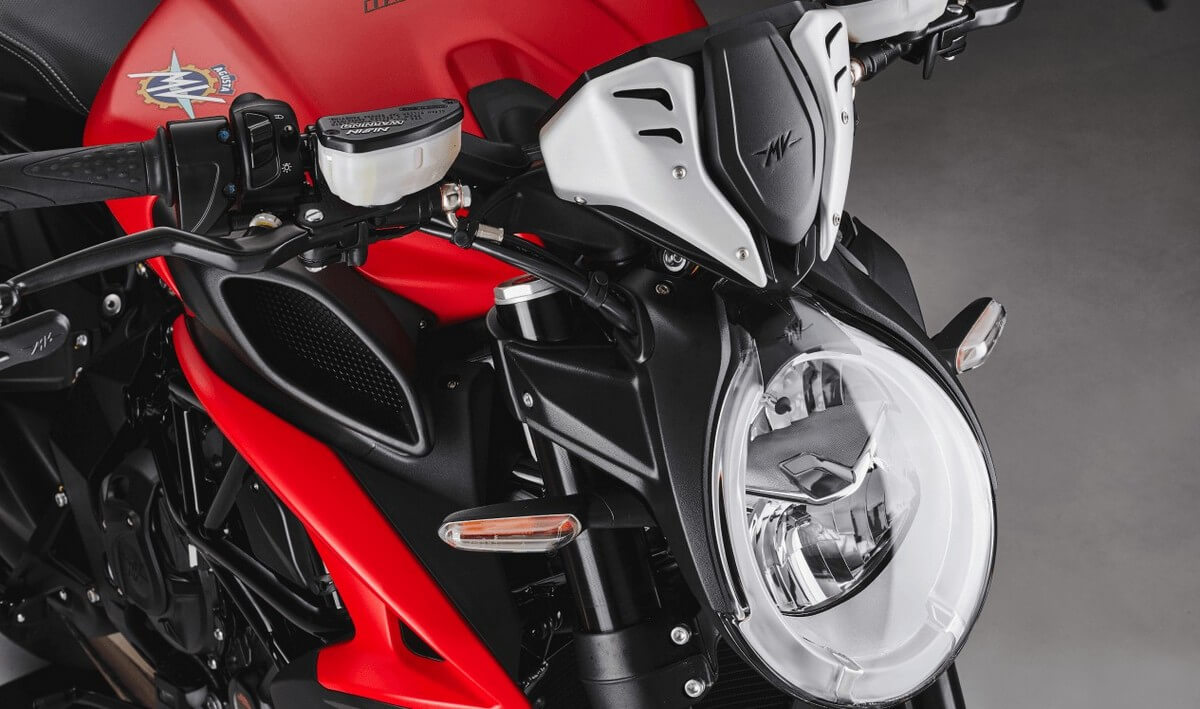 The Rosso is the entry-level trim into the Dragster range. It is in a lower state of tune compared to other variants, but it is loaded with enough tech to keep you entertained and safe.

The Rosso is powered by the same signature 798cc inline-triple cylinder engine common to all variants, albeit in a lower state of tune. It gets a whole raft of revisions to achieve Euro 5 compliance, among other tweaks to make it more refined and easier to ride.

Furthermore, subtle changes to the clutch make it more robust and lighter and improving the feel on the lever. The MV EAS 3.0 up/down quickshifter is fitted with a new sensor to aid in faster and smoother gearshifts. It is all mated to a six-speed constant mesh transmission that produces 112 hp @ 11,000 RPM and 62 lb-ft of Torque @ 8,500 RPM.

The design has always been a formidable selling point for any MV Agusta motorcycle, and the Dragster is still very much a part of the story. The Italian manufacturer extended the ‘If it ain’t broke, don’t fix it’ design philosophy from its predecessor to its latest model.

The Dragster has certain styling elements and cues that set it apart from its naked sibling. Starting from the front, it is flanked by a full LED headlamp with DRLs and a body-colored cowl to deflect air over the rider and is complemented by a wider handlebar stance that evokes a café-racer motorcycle. Moving on to the side, the exposed tubular trellis frame proudly shows off the underpinnings of the machine. At the same time, the seat height went up by 15 mm to 845 mm to deliver an even more aggressive and visceral riding experience.

Taking the aggressive styling even further, the tail is kept really short and sharp and is complemented by a wide rear LED combination lamp to give it that menacing appearance. Topping off the final design is that signature triple silencer and a 200mm section radial rear tire.

The Rosso gets aluminum alloy wheels and is offered in a single ‘Matt Ago Red’ paint scheme. 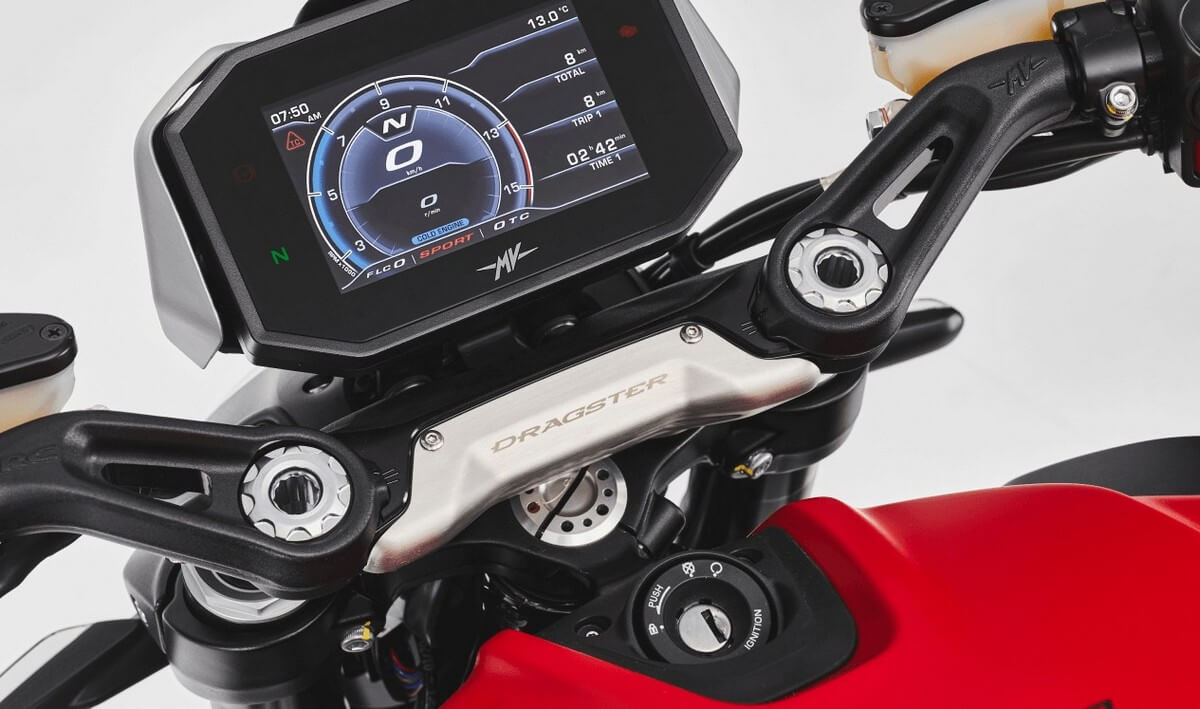 The most significant update with the latest gen Dragsters is the all-new electronics package. A new Engine Management System is in place, and it is a culmination of the integrated ignition-injection system- MVICS 2.1 along with an Engine Control Unit – Eldor Nemo 2.1. The rider can access the various toggles and settings via a 5.5′ Full-color TFT display that also supports Bluetooth connectivity and support for the MV Ride app.

With the new EMS in place, the Rosso also gets a ride-by-wire throttle configured by 4 different riding modes: Sport, Race, Rain, and a rider configurable mode with settings for engine power modes and up to 8 different levels of traction control. MV also added a cruise control feature for coasting during long rides. Last but not least, all Dragsters get an ABS system developed in conjunction with Continental with a RLM (Rear wheel Lift-off Mitigation) and intervention while cornering.

The MV Ride app provides user access to the bike’s telemetry, routes, and navigation controls. Users can also configure their motorcycle using a custom map feature to adjust engine power settings, traction control, suspension settings and set it up according to their needs.

The Dragster retains the ALS Tubular Steel trellis frame configuration from its predecessors. Still, it is updated with new frame side plates for added stiffness and rigidity for improved performance during spirited riding or at the track. A revised linkage and rear monoshock would help in improving riding comfort.

The chassis is complemented by a 43 mm fully adjustable Marzocchi USD (Upside down) separate function forks with a DLC coating at the front, while the rear end also gets a fully adjustable Sachs monoshock with rebound and compression damping adjustability.

Braking duties are carried out by top-of-the-line Brembo 4-piston monobloc calipers with twin 320 mm discs at the front, while Brembo 2-piston calipers cover the rear wheel with a single 220 mm disc. Taking care of the braking system is a dual-channel ABS developed in collaboration with Continental.

MV Agusta claims a fuel economy of 75 mpg on the road, while the top speed achieved on a closed course was 147 mph. 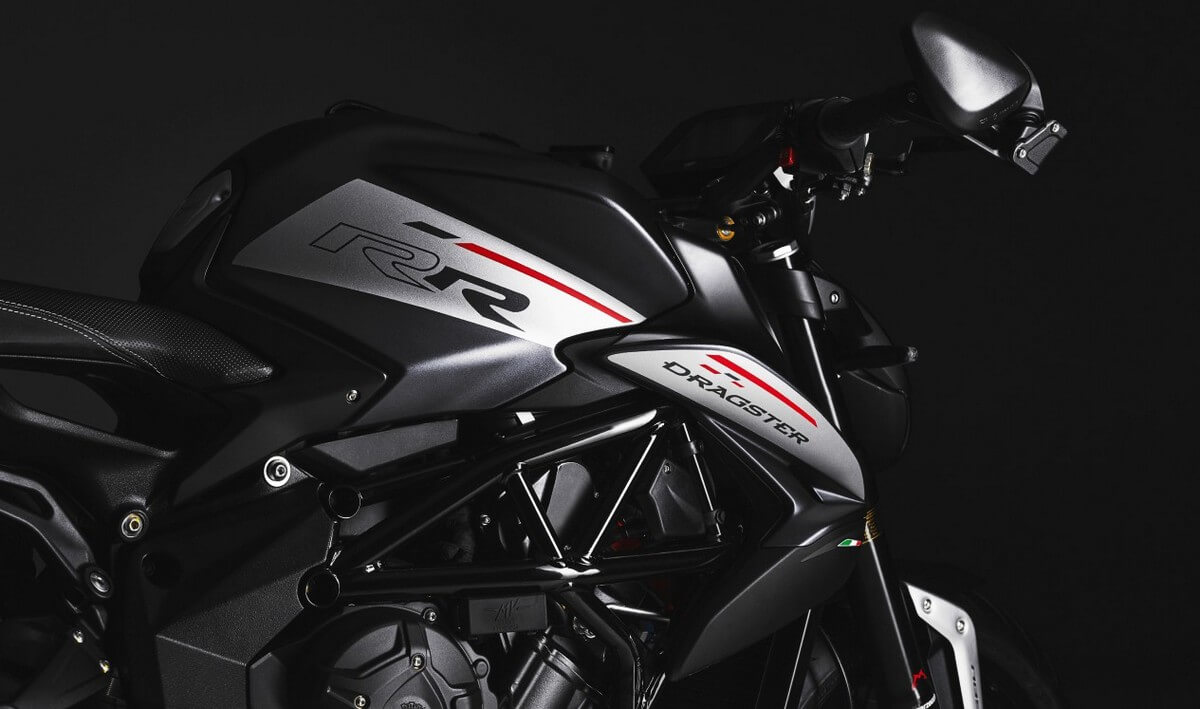 The RR gets a power bump with additional features over the entry-level Rosso.

A major distinction between the two variants is the inclusion of a 6-axis IMU (Inertial Measurement Unit) measuring lean angle, pitch, and yaw in all three axes giving rise to lean-sensitive traction control and cornering ABS. Since it’s an RR model, a launch control system is also added to the functionality. Riders can also track their weekend rides and outings with the help of the Mobisat tracker. 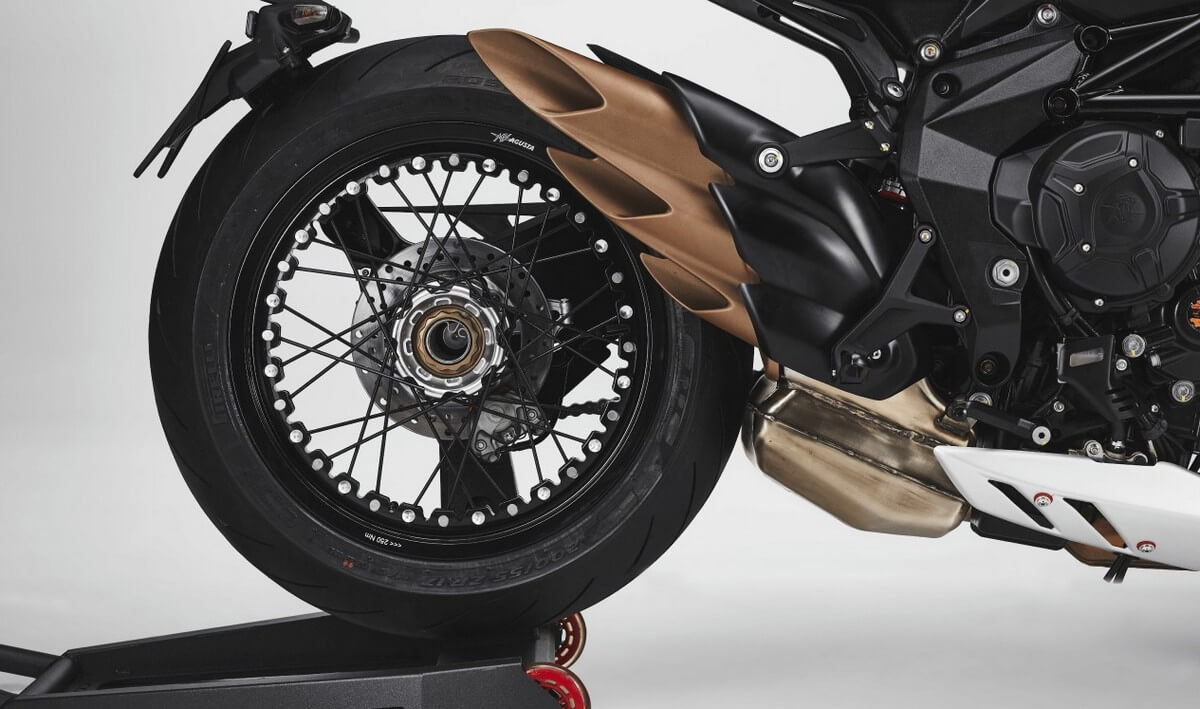 The only addition to the chassis is an 8-way manually adjustable steering damper.

MV Agusta claims a fuel economy of 64 mpg on the road, while the top speed achieved on a closed course was 151 mph.

The only difference between the RR and the RR SCS is in the name and what it entails!

Power, torque, and weight figures have remained the same across both variants. The difference is in a clever clutch system that lies underneath the flesh. Developed by Rekluse, the Smart Clutch System 2.0 is updated with a new pressure plate and an automated clutch system that makes it easier to ride within the city and gives blisteringly quick starts off the line on account of the same.

The RC SCS is the top-of-the-line flagship offered in the Dragster range. Shedding a few more kilos and getting the Reparto Corse treatment, there’s nothing like it!

The RC SCS has the Rekluse Smart Clutch System onboard, but it also ropes in the involvement of the racing division of MV Agusta – Reparto Corse. With a focus on pure performance, the bike is 18 lbs lighter than other variants and also gets an optional Racing kit that includes the SC-Project Titanium exhaust silencer + Power unit for SC exhaust silencer carry-over (with special mapping) to take the peak power up to 150 hp. 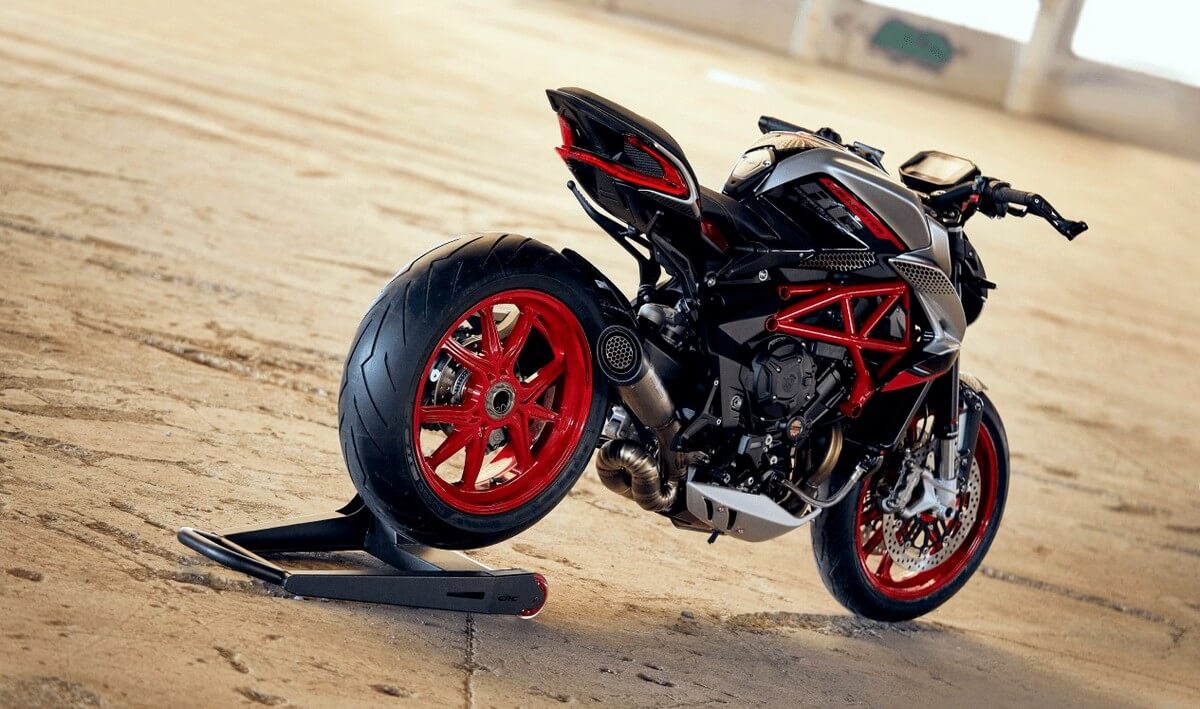 The RC is a limited-edition variant with only 200 variants up for grabs. The RC treatment entails carbon fiber front mudguard supports, fuel tank side covers, and the rear fender. Moreover, special forged aluminum alloy rims are in place of the spoked alloy wheels. The RC gets a special tri-tone livery with the RC graphics on the tank along with an Ago Silver/Glossy Black/Ago Red finish.

MV has a range of options for owners to choose from, including wheel stickers, tank pads, bar-end mirrors, frame protectors, clutch, and brake levers, among a full list of options. The RC is also eligible for these above options along with the SC Project Titanium Silencer and Power unit as part of the racing kit. More details available on MV Agusta’s website.

There’s nothing like owning an MV Agusta motorcycle. The exquisite design and engineering prowess backed up by all the horsepower and onboard wizardry make it an irresistible combination to beat.

The Dragster is by no means slouch as one of the introductory models into MV’s lineup. The sweet 800cc inline-triple engine, signature triple piped exhaust, short and aggressive tail section, spoked wheels, and the Diablo Rosso tires say otherwise. Besides, the Rekluse SCS 2.0 system makes it easy to handle traffic conditions within the city and simultaneously allows for much quicker launches when combined with the up/down quickshifter. All in all, it is still a unique proposition as compared to other naked bikes like the Street Triple RS, MT-07, Z900, etc.

Though the RR SCS offers all the features that one could wish for, it still comes at a hefty price. As an overall package, the entry-level Rosso is the best option to buy as it retains the most important features from the other variants and is a great introduction to the MV Agusta brand.

2022 Suzuki Hayabusa: Everything You Need to Know | In-Depth Review