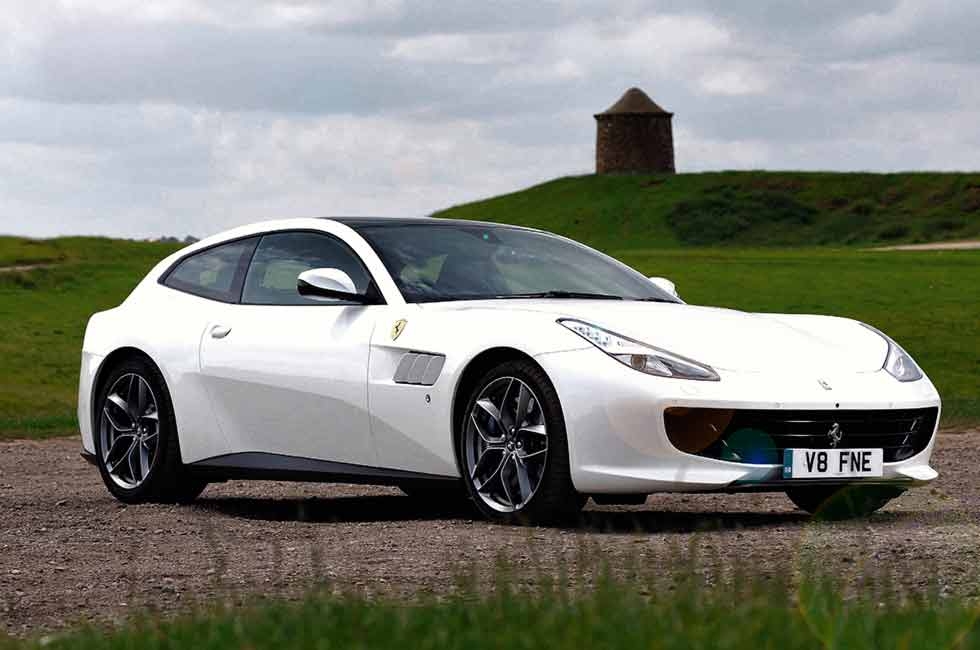 The Road to Ardnamurchan Driving to the remote Ardnamurchan Point. Our first UK drive of the GTC4Lusso T – the turbo V8 sister to the original V12 – takes us to Britain’s most westerly mainland point. How does Ferrari’s GT cope on some of Europe’s best roads? Story: Chris Rees. Images: Michael Ward & Chris Rees.

So this was the original headline for this story: Turbo to Tarbet. Our grand alliterative idea was to take Ferrari’s new turbocharged GTC4Lusso T to Tarbet, the beautiful Loch Lomond-side town and the ideal place from which to launch an assault on some of the world’s best driving roads.

That was until I looked on the map and spotted a peninsula sticking out into the Irish Sea with the name Ardnamurchan on it. It turns out that this is not only the (possibly apocryphal) historic measure of the angle beyond which it was not permissible to show the male member in print, but also the most westerly point on the British mainland. That was too tempting to miss. With an allotment of four days at our disposal, it was just possible to drive from Ferrari’s UK HQ in Slough to Ardnamurchan Head and back – a distance of over 1300 miles.

The reasoning for this apparently foolhardy journey was twofold. First, to test how well the new V8 turbo GTC4Lusso T – lighter than the V12 model and rear-drive only – would perform on a variety of low-traffic roads. And two, to test one of the vaunted attractions of the ‘T’ version of the GTC4Lusso: its extended touring range (Ferrari’s claim is a 30 per cent increase).

Let’s get the second test out of the way straightaway. The 91-litre tank needed filling two-and-a-half times on our 1300-mile route, equating to an average of 24.2mpg. That’s really not bad at all for a car packing a 610hp turbo lump. It also turned out to be an excellent long-distance companion, absolutely munching the miles on the blast up the M6 and M74 motorways at a relaxed gait. My one caveat is the directness of the steering, which can become fidgety on the motorway.

Not long after Glasgow, the roads start to narrow. By the time the A82 reaches Loch Lomond, it’s getting so tight that you have to give way to passing buses. That immediately throws up one issue we’re going to have on Scottish roads: the Lusso is a big beast. At nearly two metres wide, it takes real care to keep my promise to Ferrari to avoid kerbing any wheel or scraping any hedge.

I take a left on the A817 to Garelochhead, a fine stretch of fast, twisty roads where I can really extend the car. The V8 turbo engine chucks out 610hp (60hp less than the 488, and 79hp less than the V12 GTC4Lusso), and it feels every bit as fast as its 0- 62mph time of 3.5 seconds would indicate. Peak torque is delivered at a mere 3000 revs, so it’s effortlessly fast in every gear. While the seven-speed ’box works super-smoothly in auto mode, it’s a little keen to change up early in Comfort mode, so I often find myself taking control via the steering wheel paddles and enjoying the full 7500rpm rev range.

This is Scotland so it’s pouring with rain. Here’s another good test for the GTC4Lusso T: since it’s rear-wheel drive – in contrast to its still-available V12 brother’s four-wheel drive – will it struggle with traction? Ferrari has set up the ‘T’ to be sportier in feel than the V12. It’s lighter (1865kg versus 1920kg), its weight bias has shifted more towards the rear (46/54), and it has specific damper and rear-wheel steering settings.

The manettino on the steering wheel has five positions (Ice, Wet, Comfort, Sport and ESC OFF) – there’s no Race mode as there is in other Ferraris. and I select Sport for this fast section of damp road (who really wants to numb everything in Wet?) and it’s still extremely grippy on its 295mm rear rubber. The beautifully direct steering and rear-wheel steer really sharpen up turn-in, helping to guide the big beast through corners predictably.

But it still allows for a bit of fun. The electronic differential (E-Diff) and SSC3 Side Slip Control are calibrated to recognise when you want a bit of sideways action. It never gets as dramatic as other models in Ferrari’s range, though – if you really want to go sideways, you have to switch the manettino to ESC OFF – but the oversteer is predictable. There is one moment, though, when it doesn’t behave as expected. Overtaking a caravan on a straight section of road in the wet, the rear end snakes violently on the tiniest of steering angles. That certainly wakes me and my passenger up, I can tell you.

The A814 up Loch Long to Arrochar is quiet but rather narrow and bumpy; an ideal moment, then, to try the ‘Bumpy Road’ damper setting. The ride is always on the firm side, even in bumpy road mode, but it’s never unbearable and certainly far more liveable with than the 488 GTB, for instance.

I’m tempted to take a picture at Tarbet railway station but it turns out the stop is actually called Arrochar & Tarbet. So much for the ‘Turbo at Tarbet’ photo opportunity… Back on the A83, the run over the Rest & Be Thankful Pass is huge fun and thankfully on our chosen day it’s not too heavily trafficked. We hook a right on to the A819 at Inverary and then follow the sunshine to Oban on the A85 and a quick visit to the local distillery. Our GTC4’s startling white paint – a £15,360 option, incidentally, complemented by £3552 dark-painted wheels – is attracting plenty of interest among the visitors, we can’t help but notice.

From Oban we take a gentle run up the coast towards Fort William, just before which is the Corran ferry, our jumping off point on to the Ardamurchan peninsula. The ferryman admires the GTC4Lusso: “That’s the nicest car we’ve had on here for a while.”

At which point, a gaggle of German classic cars turns up – including a couple of Aston DB5s – and our prize is short-lived. Still, we’re first off the ferry, giving us an unbroken tilt along the superb road to Strontian. We enjoy this open, undulating section while it lasts, for what awaits beyond is a 25-mile stretch of virtual single-track road all the way to the end of the peninsula.

With each passing mile, things becomes wilder and more remote. The views across Loch Sunart to Mull are spectacular but equally breathtaking are the headland’s moors and evocatively bare mountains. Much of it is a 55 million year-old volcanic area known as the Ardnamurchan caldera, and an other-worldly aura pervades the place.

We even spot what we think was an eagle, while a placard in the sole café along the route attests to recent sightings of dolphins. Civilisation gradually ebbs away, with just a tiny smattering of isolated farms remaining; you’re left on your own for mile after glorious mile. There is a distillery here but it’s only five years old and has yet to produce its first single malt – patience is a definite virtue in this part of the world. A local told us that the distillation tanks had to be made especially small because the regular ones simply wouldn’t fit along this road.

Finally we reach Ardnamurchan Point, where a sign tells us that the public road is at an end. You can go further, snaking around the cliff to the lighthouse (open to visitors from spring to autumn) and we even park right under it, making ours definitively the most westerly vehicle on the British mainland.

Returning on the same road, we then strike north across the peninsula to Lochailort, where we reach another of Scotland’s greatest pieces of tarmac: the A830 ‘Road to the Isles’. It’s worth driving west to Mallaig for the contrast of wide, open driving to which the GTC4Lusso is best suited. It’s also a chance to test Ferrari’s ceramic brakes in safety, and yes, I can report that the car stops exceedingly quickly.

The sight of the Skye ferry at Mallaig is very tempting but sadly our time is up. Returning via Fort William, we take the opportunity to follow the A82 through Glen Coe, topping off a truly memorable west coast drive. Here it’s best to go calmly and appreciate the unbelievable atmosphere of this high-altitude place. It’s also a chance to appreciate how comfortable the GTC4’s cabin is, and how good the displays are (especially the 10.25-inch touchscreen and optional £3360 passenger display). It’s superbly spacious up front, and we try the rear seats to know that there’s enough room to squeeze in a couple of kids here, plus luggage for a weekend away.

So what’s our conclusion after this varied test? As a touring car, the V8 turbo does work better than the V12: you need to stop for fuel less often, it has a lighter feel on the road, and it’s more relaxed because you don’t need to rev the engine as high. In some ways it’s more dynamic: the lighter weight, rear-drive and weight balance gives it a keener feel. It’s not even that much slower (the 0-62mph difference is just 0.1 second), and it actually has more torque than the V12.

The £40,000 price difference is hard to ignore, too. The only ways in which the V12 is superior are traction and engine noise. There’s still nothing to beat a raw naturally aspirated V12, and the V8’s soundtrack is pleasantly burbly rather than spine-tingling; when the exhaust baffles open at 3000rpm, the difference isn’t as dramatic as I’d like. But as an all-rounder – the Ferrari you’d choose to live with as an everyday car – the Lusso T is hard to fault.

No lack of comfort here for the long journey. Only criticism is the awkward cruise control system. V8 engine actually has more torque than V12. Surprisingly good economy keeps our wallet happy. About as remote as it gets: lighthouse is way beyond civilisation but Ferrari proves extremely civilized.

BRAKES: Carbon ceramics all round