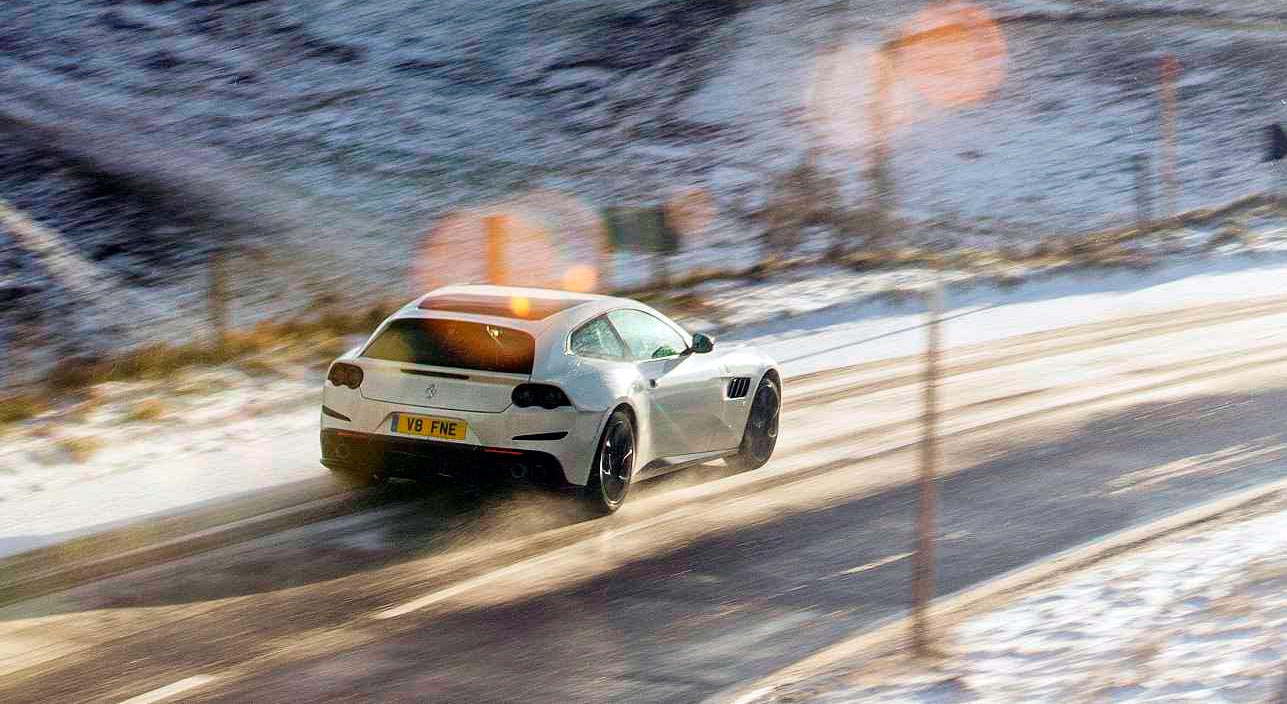 2018 Ferrari GTC4 Lusso T Modena’s new V8-engined grand tourer offers all the thrills of the V12. If only it sounded a bit more special… Photography by Aston Parrott.

It seems likely that sales of the GTC4 Lusso will take a hit when the Ferrari SUV – or FUV as Modena calls it – joins the line-up. For now, the shooting brake-style Lusso is the only full-size, four-seat Ferrari option, and very fine it is too, powered by the V12. An elegant evolution of the rather brittle FF, the Lusso improves on almost every aspect of the earlier model, especially with its more rounded and convincing dynamics and sleeker styling. Unusually, it is also offered with another engine choice, a version of the twin-turbo V8 in the California T and 488, and is called the Lusso T.

The Lusso T dispenses with the V12’s novel four-wheel-drive system – effectively a four-speed gearbox driven off the front of the engine – but not because the T has less torque to deploy. Although the 3.9-litre V8 produces a muscular 602bhp, some 78bhp down on the output of the naturally aspirated 6.3-litre V12, it actually churns out 560lb ft of torque, which is almost 50lb ft more.

The V8 Lusso weighs 55kg less too, most of which comes off the front, shifting the weight distribution rearwards for a 46:54 front:rear split. A look at the performance figures suggests this benefits traction because at 3.5 seconds for the 0-62mph sprint, the rear-drive V8 is only a tenth slower than the 4WD V12. The V8 nails 0-125mph in a storming 10.8 seconds and goes on to a top speed tantalisingly just 1mph short of 200mph, while the V12’s extra power pushes it on to 208mph.

Visually, you’d be hard pushed to tell a V8 Lusso from a V12. The V8 costs £200k, about £30k less than the V12 before options, which on this example bring the total to £255k. They include blue brake calipers that match the blue leather interior, though the most significant items are the special order ‘Bianco Italia’ paint (£15k) and panoramic glass roof (£11.5k). The latter makes a huge difference to the experience of rear-seat passengers; adults will find plenty of room in the back and the glass roof increases the sense of space.

You certainly know which engine the Lusso has when you push the starter button. The V12 has a rich, complex note, while the V8, which is a flat-planecrank design that synchronises the firing of its cylinder banks, has a smooth but rather plainer four-cylinder-like sound. And mooching around at low revs, the active tailpipe valves flip between open and closed, between bassy and quiet, so there’s a less consistent, less sophisticated sound compared with the V12.

What both models do have in common is a smooth, compliant ride when the manettino dial is set to Comfort. Winter tyres are fitted for our drive, as per Ferrari UK policy in our coldest months, and the Pirelli Sottozeros, which are the same width and profile as the summer rubber, probably add a little more comfort. The V8 gets rear-steer like the V12, and initially steering response feels like it speeds up away from centre, but you quickly adapt and are soon revelling in how naturally balanced and biddable the chassis feels. It’s a big car but doesn’t feel it when you’re pressing on, which is a great compliment.

Equally impressive is that the car works brilliantly in low temperatures. Winter tyres are designed not just for snow but for temperatures below 8deg C, and a brisk sub-zero cross-country hack is like driving on a warm, dry road. We find snow too, and the Lusso T takes it in its stride (it’s like driving on summer tyres on a wet road). Indeed, it goes places that the four-wheel-drive V12 on summers couldn’t go.

There’s no shortage of urge from the V8, the twin-turbo unit fast to respond, assisted by the snappy, sweet-shifting dual-clutch ’box. It revs smoothly and briskly to the 7500rpm red line, and although not as musical an experience as the V12, the V8 makes the car feel pretty much as quick and has a clean, free-revving urgency to its bark that encourages high revs.

At a motorway cruise the V8’s note dies to a murmur. Indeed, true to its intended role as a long-distance GT, the Lusso T is an effortless and comfortable mile-eater. Worryingly, its natural gait seems to be 90mph – that’s the speed it seems to want to settle at, when all seems calm. Road noise (even with the winter tyres) and wind noise are low; the seats supportive and cosseting. Adding to its long-distance cruising credentials, the V8 Lusso is reckoned to be a third more economical than the V12. We see an average of over 26mpg on a 400-mile motorway trip, which means a 91-litre tankful could put 500 miles under the T’s wheels between fuel stops.

As with the V12, it takes a while to learn your way around the infotainment and the switchgear on the steering wheel, which is evolving to be more intuitive. More straightforward are the functions of the manettino, which offers five settings, from a snowflake symbol through Wet to Comfort to Sport and finally ESC Off. The snowflake does not access a drift mode for mucking about in the white stuff, quite the opposite – it softens the throttle and puts the stability control on super-sensitive, with the intention of keeping the Lusso calm and on line.

Sport is a great setting for twisting roads, with the V8 punchy, the gearbox always in the right gear or grabbing it the instant you want it, and the damping more taut for handling that is crisp and agile. It’s involving and rewarding.

And we can report that with all electronic safety nets switched off, the Lusso T is eminently driftable on snow on its snow tyres, comfortably poised on opposite lock, with plenty of power on tap to change the angle. Over two days we rack up over 1000 miles, and the Lusso T proves an outstanding GT thanks to its supple ride, great seats and very low wind and road noise. It also makes light work of twisting roads, feeling every bit as fast as the V12 but even more agile and light on its feet. That said, if I was spending over £200k on a Lusso, I’d still find it hard to not go the whole hog and pick the V12. But only for the richer, classier soundtrack, not the all-wheel drive, because if you really want to go anywhere in the winter months, a set of Sottozeros will do the job better than a four-wheel-drive car on summer tyres. Of course, the ultimate combo would be winter tyres and four-wheel drive.

+ Effortless, comfortable GT that’s light on its feet for its size

– Misses the richer soundtrack of the V12

‘True to its intended role as a long-distance GT, the Lusso T is an effortless mile-eater’