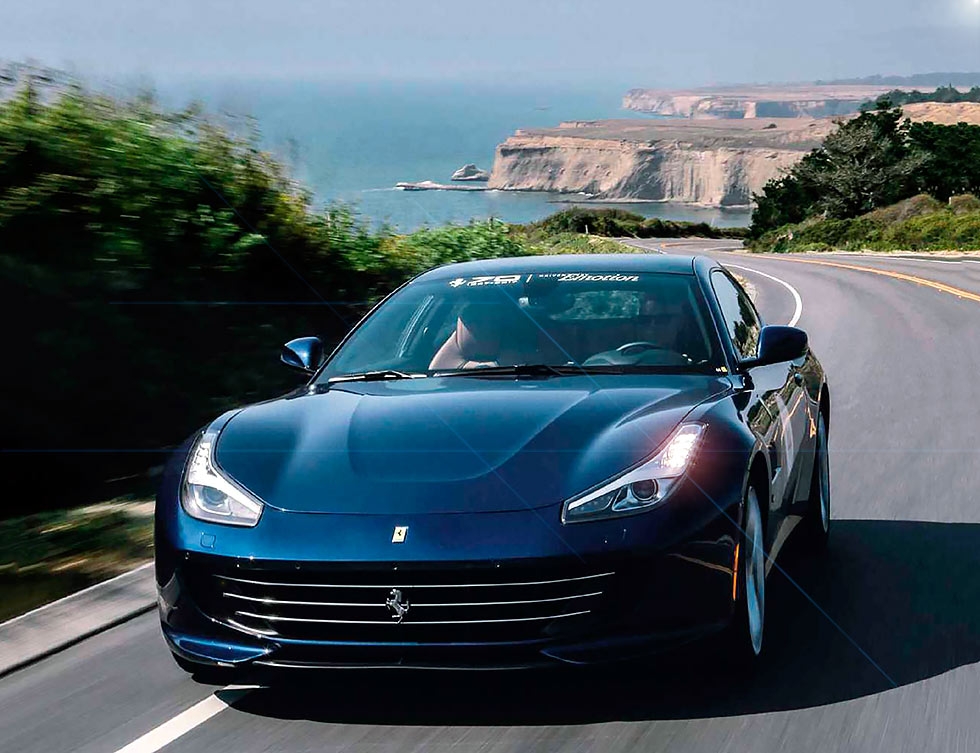 Just for a day I’d got used to the idea that special, valuable cars weren’t everywhere. Spend time on the roads between Pebble Beach and Laguna Seca during Monterey Car Week and every other vehicle is a collectable. I’d queued over the Laureles Grade with a 250 Testa Rossa in my mirror at one point. And as I leave for Half Moon Bay along Highway 1 North, normality (of a sort) ensues. I share lanes with beat-up Subarus, anonymous Fords and Kias, and trucks, trucks and more trucks, marvelling at the Pacific, the pelicans, the sea lions. The wildlife is abundant. Lots of humans in the sea too, doing their best in wetsuits to look like something an errant shark might eat. Then I pull up at the Ritz-Carlton Half Moon Bay.

The grandeur of the hotel is a clue that I’m not on Drive-My’s ticket here, and the parking garage is another. It’s awash with Ferraris, around 50 of them, but not the chrome-glinting 250s so numerous down the coast. These guys collect Ferraris but not via RM and Bonhams. They order the latest V12 – F12s and FFs abound – and have a 488 GTB or Spider as a runaround. And here are lots of those.

The occasion is an element of Ferrari’s 70th anniversary celebrations, a tour around northern California called ‘Driven by Emotion’, invitation-only for valued customers. I’m here for the first day’s tour, south on the 1 and then into the Santa Cruz mountains. But first the driver briefing, hosted by Ferrari North America’s Arrick Maurice.

‘This week is all about the driving experience,’ he says. ‘We ran a rally in Florida last year and brought it to California for the 70th celebrations. Expect beautiful, dynamic roads and unique experiences. There were rains in the mountains last winter, so many of the roads have been resurfaced, and that’s great because we’re gonna see a lot of yellow Z-bend signs.’ He introduces fellow MC, pro driver and tour leader Didier Theys, ‘the most bad-ass driver on this tour, no matter what you might believe about yourselves. He’s won multiple times in the Daytona 24 and the 12 Hours of Sebring, and he’s the winningest driver in the Ferrari 333 SP.’

And so it’s over to Theys. ‘I like to share my passion. I first drove for Ferrari in 1995 and worked with a team of technicians – it’s not just the car, it’s the passion of the team. They wanted to know what worked, what didn’t work, and we grew to understand each other. Today I’m leading one of the driving groups. Don’t forget, there is always a reason if I brake. You brake too. I retired from racing only eight years ago and I still have a big ego. Don’t pass me!’

And with that we head to the parking garage and our mounts. ‘Mine’ is a deep blue GTC4 Lusso, the fourseat, four-wheel-drive, four-wheel-steer supercar for those who want to thrill passengers and luggage. Its 681bhp V12 whirrs into life, settling to a frenetic yet quiet idle that’s soon belied by the angry and urgent response to a quick throttle-prod. The seating position is low yet comfortable, the cabin layout quirkily intimate in the way it presents its controls – no single iDrive-style controller, but small groups of wheels and switches that you quickly assimilate as they’re not simply bundled in a stack. I feel at home here. It’s overtly modern yet very Maranello in ambience.

I pull away at the back of a group of 12 or so Ferraris, following an F12 TdF plus a couple of Californias and a gaggle of 488s, all barking and yelping to be let off the leash. Along Highway 1 we gather speed where we can, led expertly by US motoring TV and radio host John ‘Hammer’ Pallazolo and kept informed of any hazards (or potential licence-losers) by walkie-talkie. But it’s a convoy. Will there be any freedom to explore the upper limits of the throttle?

That question is quickly answered as we head east on the delightfully named and wickedly tortuous Bonny Doon Road. This is Redwood Forest territory, and our first stop is at Big Basin, high in the wooded hills where Hitchcock’s Vertigo was filmed. The convoy begins to pull apart, so we each have space to play. And what a playground these roads are.

Cancel ‘auto’ and let the paddles come to life. ‘Sport’ is selected on the wheel-mounted manettino switch so throttle response is urgent, gear-shifting instantaneous yet never jerky, and the ride is deftly damped: firm yet with no lost motion, and impressively delicate in spite of the Lusso’s 1800kg kerb-weight.

Curve after curve broadens the grin, and Arrick Maurice was right about the surfaces: smooth and grippy rather than the broken topography we’d suffered so far. The Lusso turns in eagerly, its sharpness in these circumstances taking some getting used to. It’s clearly more supercar than laidback GT, never mind the suitcase-sized boot.

Wringing out the V12 is an unalloyed joy, its low-rev hum shortly displaced by a harder-edged burr that grows into a bellow then a wail as you close in on the red paint beyond 8000rpm. From a 6.3-litre V12. This engine is incredible, as is the route. The giant redwood trees are close by the edge of the road, their roots often eating into and lifting the tarmac, so the Lusso’s gymnastic suppleness is a huge benefit here.

Following the snake gives you forewarning of any traffic coming the other way, too: spot brake lights and you shed speed sharpish. There’s not a great deal of width to play with and some road-users are driving Duel-style tankers. Rather more politely than Spielberg’s anti-hero, thankfully. And I have way more power at my command than Dennis Weaver did in his 1970 Plymouth Valiant.

Time for a quick pit stop at Big Basin. Not much suspense here, other than the queue for the restrooms and everyone’s eagerness to get back out and play. We’re heading for lunch at the Thomas Fogarty winery, up in the mountains overlooking Silicon Valley at the southern end of San Francisco Bay. And the roads are getting tighter. One lane wide. Lots of brake lights, though still lots of bravura too. These Ferrari owners don’t hang around, and the circumstances of this event increasingly make sense.

They’re all high-net-worth individuals, many from California though several have travelled from elsewhere, such as Texas and Florida, one from the latter tempted by another tour after enjoying last year’s so much in his own neighbourhood. Yet nobody I speak to has driven their cars here over a great distance.

They were air-freighted. And some can’t stay for the whole event. I overhear a phone conversation about hooking up on Thursday morning (today is Tuesday and the event runs to Friday evening) to get the car returned. Time is precious, so the intensity of the experience is important. It really isn’t only about the driving after all, and most of these guys are accompanied by their wives. This is downtime together, away from the pressures of business, and more than just a quick blast up the canyon in the 488 or the F12.

For now, concentration levels need to remain high. If Ferrari was ever to build a public track through forest, it could learn a lot from this place. The pressure of pace and the strobe-like passage of massive trees lessens as we climb, astonishingly, into the outer limits of Palo Alto, a tech city that’s also home to the beautiful winery and vineyards of Thomas Fogarty. A delicious yet informal lunch of grilled chicken, pasta and salad is eaten to the accompaniment of a guitarist, and I meet a couple of the owners, one of whom originally hails from Liverpool in the UK, another from Mexico. The land of opportunity has fulfilled its promise to them, and down in the mists below we can see where three decades of innovation have fed the economy of California. If the state divorced from the rest of the USA, it would still be Ferrari’s fifth-largest market worldwide. That’s quite a statistic.

As we head back towards Half Moon Bay, I notice the fuel gauge is down to the last two bars and ease progress just a little, no longer exploring the upper reaches, and allowing the seven-speed gearbox to do its own thing. You still travel quickly; this is not a car in which you need to back off. Yet it’s also a car in which you don’t need to bounce off the rev limit all the time in order to enjoy proceedings. Asked to pull against tall gears, the V12 displays monstrous torque and gargles through its tailpipes, a tune almost as tingling as the high-rev scream of earlier. What a car, with total duality of purpose yet never a schizophrenic moment.

Dinner tonight IS filet mignon or Alaskan halibut, served at Filoli Estate, a mansion not far from Half Moon Bay. Never heard of it? Bet you’ve seen it. This is the house that starred in the opening credits of Dynasty, home to the Carringtons. Probably the kind of people who, if not fictional, might have enjoyed an event such as this.

And having dinner there is one of those unique experiences. There are several still to come, not least a trackday at Thunderhill Raceway with coaching from Didier Theys, via a route that crosses the Golden Gate Bridge for Napa Valley wine country, and lunch cooked by world-class chef Massimo Falsini.

But Drive-My’s involvement ends here. It’s time to rotate back to the real world, leave the Lusso at the hotel and head for the airport. Even one day in the company of these cars, on these roads, in this environment, is a vivid insight into the sheer intensity of Ferrari ownership.