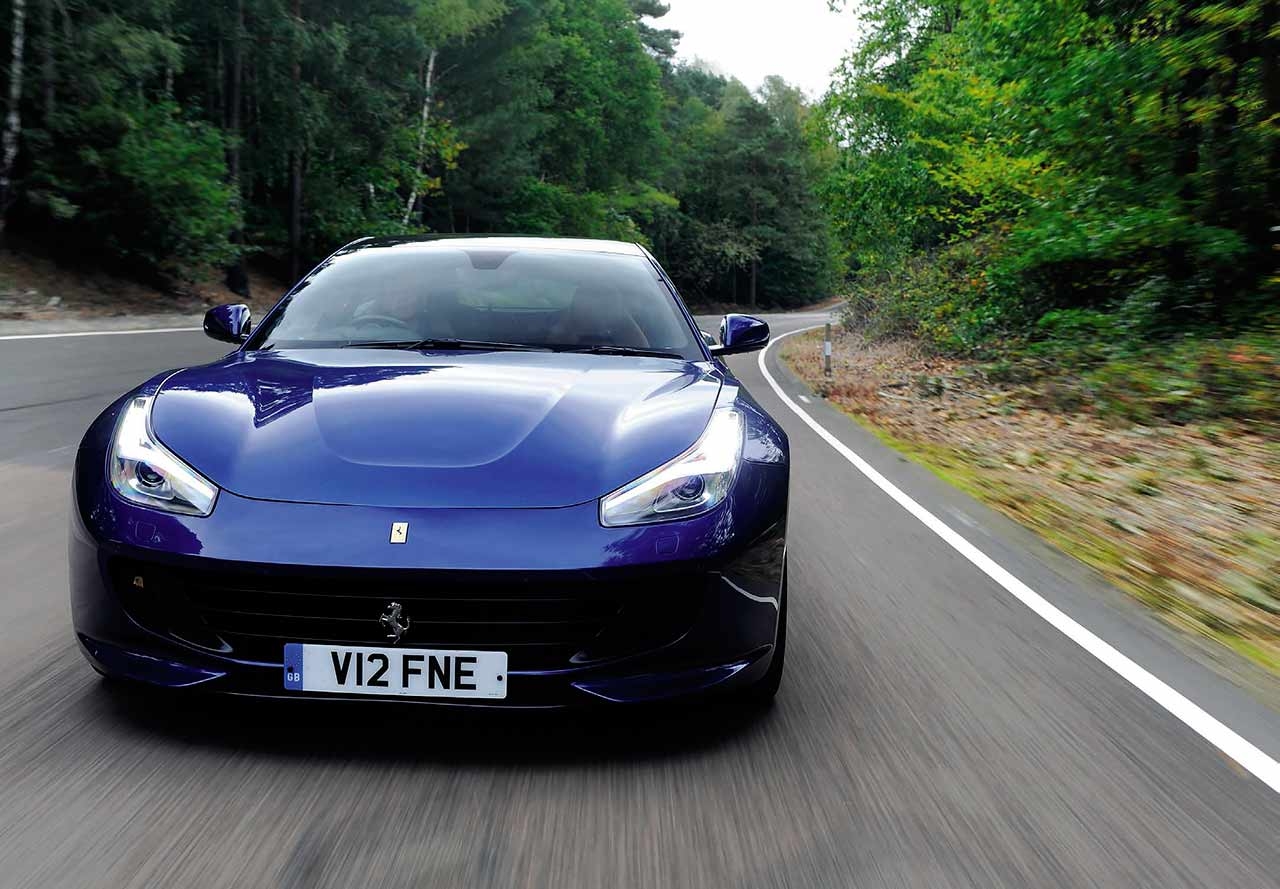 It’s a familiar tale. A car manufacturer launches a model in signature, range-topping four-wheel drive spec. Some time later comes a cheaper, feistier two-wheel drive version that many argue is the ‘purer’ model – the one to have.

I’ve heard many people say this about the Ferrari GTC4Lusso. This was, of course, launched in 2016 in just one guise: with four-wheel drive 690hp of raw V12 power. As of last year, you’ve also been able to buy the GTC4Lusso in ‘T’ form with a twin-turbo V8 engine and rear-wheel drive. The question is, why would you want a non-T Lusso now? After all, the big V12 is heavier, thirstier and more expensive to buy.

Two reasons come to mind immediately: having a naturally aspirated V12 powerplant and four-wheel drive. Lest we forget, Ferrari’s V12 is a thing of absolute glory. And you only get four-wheel drive in the V12 model (the Lusso T is rear-drive only).

In our first spin in the Lusso T in our June 2017 issue, we described it as a “tax dodge” model, really designed for markets which penalise cars with high CO2 emissions. But in the UK, we don’t get punished in tax terms in any significant way for the extra CO2. While such UK tax rules remain in place, there’s very much a case for V12 power. Yes, I know Ferrari’s turbo V8 has won Engine of the Year Award – twice in a row – but I must say I remain convinced by naturally aspirated power.

And make no mistake, Ferrari’s non-turbo V12 is one of the all-time great engines. With 6.3 litres and not a whiff of forced induction in sight, you can revel in fully 690hp (80hp more than the V8T) delivered at a scintillating 8000rpm. More than that, the throttle response is genuinely instantaneous and the natural aspiration means it just gets better and better as the revs rise.

There’s certainly no lack of performance, as we discovered when the GTC4Lusso acted as our pace car at the recent Autumn Motorsport Day at Brooklands. For the record, it will sprint to 62mph in 3.4 seconds (0.1sec faster than the Lusso T), while its top speed of 208mph is 9mph higher than the sub-200mph ‘T’. Yes, it’s undeniable that the V8T engine delivers more torque than the V12 but honestly, you never feel there’s any lack of oomph – particularly as 80 per cent of the of 697Nm (514lb ft) peak twisting force is available from as low as 1750rpm. The GTC4Lusso with its 12 cylinders and 4×4 gubbins may weigh almost two tonnes, but you’d never think so from its pulverisingly punchy performance.

And I’m sorry, but no V8 can ever deliver the soulful bellow at full chat that Ferrari’s V12 does: it’s like a Luciano Pavarotti opera versus an auto-tuned charity single. Wonderfully immediate induction resonance, a visceral roar as you approach the 8250rpm redline and a glorious howl from the exhausts – simply blissful. The seven-speed dual-clutch transmission is also utterly effortless in auto mode, while switching to manual mode gives it a very different character; you almost feel like you’re in an 812 Superfast.

Let’s go back to that word, agility, because the 4×4 chassis is wonderful. Rear-wheel steering adds dartiness at lower speeds – at first, it feels more feisty than you might expect for a grand tourer, but you soon get used to it. At higher speeds, there are so many aids to help you that you’d have to be an idiot to get into trouble: F1-Trac traction control, adaptive dampers, EDiff differential and Slide Slip Control (SSC) which lets you have a little bit of fun in safety; even with all systems turned off, there’s still massive traction.

Thank the 4×4 system for that. You really notice the 4×4 system working both off the line and when exiting corners. The Torque Vectoring system combines with a pair of clutches taking drive off the front of the engine to deliver power to the front wheels – no heavy propshaft diverting drive back to the car’s nose here.

As a result, 53 per cent of the weight sits over the rear axle, which helps the inherent sense of balance. You have a choice of multiple driving modes on the steering wheel manettino: Snow & Ice, Wet, Comfort and Sport. Each twist of the knob alters the car’s character subtly. The fact that there’s a ‘Bumpy Road’ setting to soften the dampers (even in Sport mode) means that the GTC4 is never fazed by potholes – although it doesn’t quite challenge the Portofino as the best-riding car in Ferrari’s range.

In so many other ways, the Lusso (‘luxury’) name is entirely apt. I loved spending time in this car’s glorious cabin. It’s very far from being cramped and uncomfortable, with easily the most spacious and cosseting interior of any Ferrari. It’s so easy to achieve a great driving position, the seats are supportive and comfortable, and there are lots of comfort-orientated goodies to keep you relaxed on long journeys. The dashboard continues the luxury theme with its 10.25-inch central touchscreen and a surprise-and-delight second letterbox display for the passenger, with a choice of views.

Let’s not forget practicality, either. I recently spent time with a GTC4Lusso owner who’s using his car as an everyday driver. With a full four seats – well, slightly less ‘full’ rear ones than front ones – and a shooting brake tailgate that opens on to a huge 450 litres’ worth of luggage space, it’s certainly got the space. And what a nice thing to be tooling around in day in, day out.

The GTC4Lusso is a truly compete all-rounder – a car for all seasons, a car for everyday driving, yet also one of the quickest cars on the road. It combines country-crushing long-distance ability, cosseting comfort and a sharp chassis that can mix it with some of the best supercars.

That V12 engine might seem like an anachronism to some, now that Ferrari’s Lusso T turbo V8 is available for £31k less than the V12’s £230,430 asking price. But if you want a Ferrari with 4×4 and can’t bear to miss out on one of the world’s most alluring soundtracks, original is undoubtedly best. That said, I’ve got my name down to drive the V8-engined Lusso T in the summer. Will I change my mind? I’d like to think it remains open.

BRAKES: Ceramic discs all round