The top of the range 2015 Audi S8 gets the Plus makeover, which includes a power hike to 605PS and some very desirable upgrades. Many have bemoaned the lack of an RS8 in Audi’s line up. Surely the halo model of any Audi range should have an RS badge firmly attached to its rear end? In answer to this, Audi has unveiled the mighty, 650PS S8 Plus.

Based on the regular S8, the S8 Plus gets a nice power hike, taking it to 605PS and up to 750Nm. That makes it the most powerful premium production four-door available, eclipsing the BMW M5, Mercedes S63 AMG and Jaguar XFR. A reworked ECU, turbo internals and sports exhaust system has brought the power increase, which Audi claims will, propel this leviathan from 0-62mph in 3.8sec and on to a top speed of 189.5mph; staggering figures for such a large car.

With the ability to head-butt the horizon at will, you’ll be pleased to note that huge carbon ceramic brakes are standard fit. Just as well, because there’s some serious mass to haul down once you’ve provoked the 4.0 biturbo V8.

The ride has also been tweaked with specially tuned adaptive air suspension, to offer a more sporty ride. Similarly Dynamic steering is now available with Superposition gear and variable transmission ratio. In true Plus tradition, the S8 has been fitted with the very best options available, making it one the most desirable Audis available. Inside you’ll find swathes of soft Nappa leather covering, well, pretty much everything. From the sumptuous seats, to the dash and doors, it’s a very high-class cabin indeed.

Above: 21in wheels and carbon details look stunning Below: The S8 Plus has several key upgrades over the S8

As you’d expect particular focus has been placed on rear seat passengers, given that many of these cars will be run by people with their own drivers. The individual rear seats are electrically adjustable and heated. The new dual-arm five spoke alloys look stunning and the 10x21in wheels fill the arches nicely. The exterior has been given the full Black treatment with all traces of chrome removed for a moody look.

The S8 Plus goes on sale in the UK in October, with prices starting at £97,700. The Dynamic package, which will be standard in Germany, is likely to be optional in the UK, so be prepared to tick some expensive additions such as the sports exhaust, 155mph limit removal, plus Dynamic steering and ride upgrades. With such a potent and well developed package, it’s clear why Audi hasn’t felt the need to create an RS8. Whichever way you look at it, the S8 Plus looks to be an absolute monster of a car. 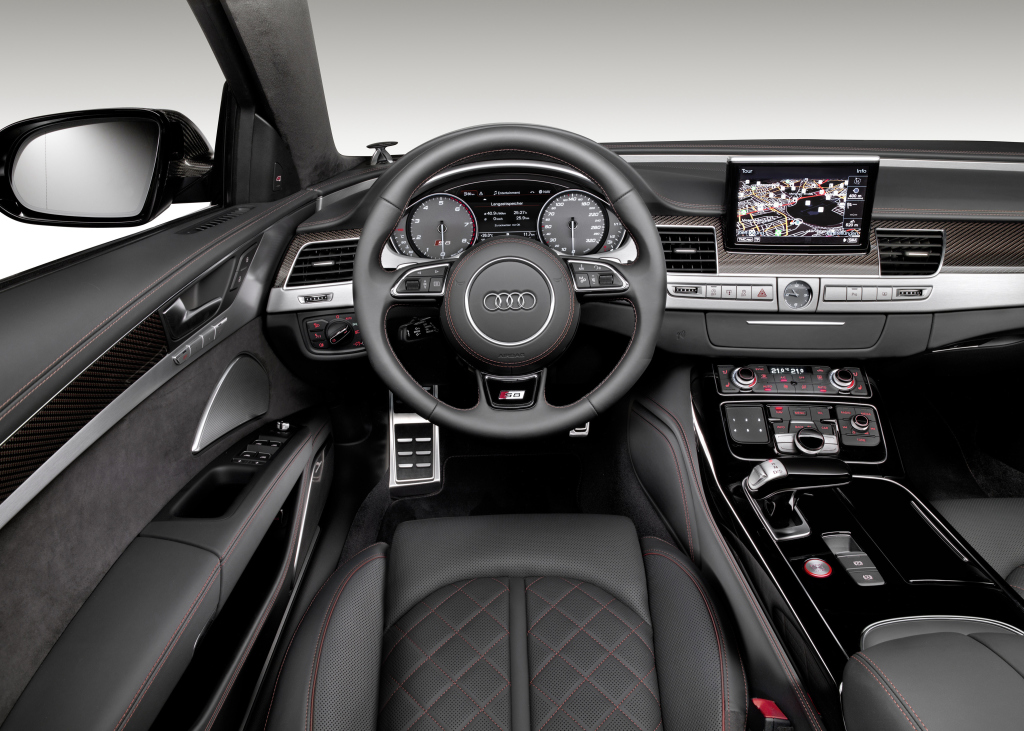