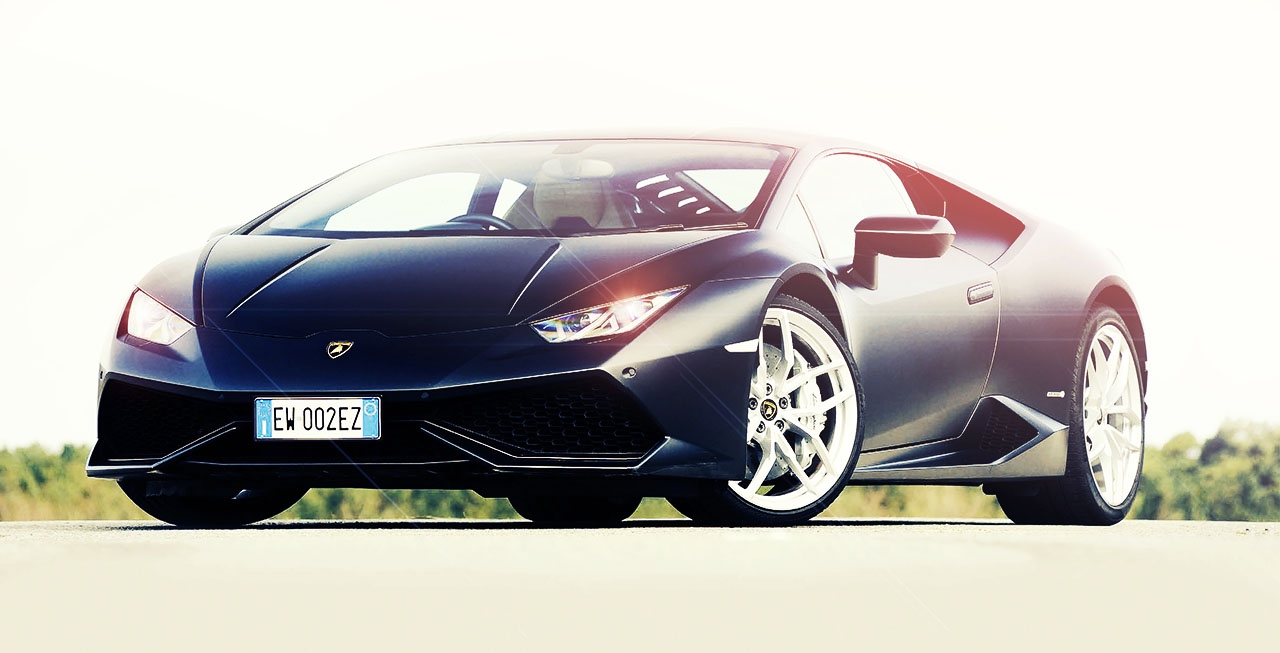 Lamborghini sticks to natural aspiration with its Gallardo successor – and good for them! Test by Chris Rees. Photography by Michael Ward.  It wasn’t so long ago that Lambos were the preserve of a certain type of person. You know: the shameless exhibitionist with unpredictable behaviour syndrome, and posters of scantily clad beach babes on the garage wall. You know: Rod Stewart, basically.

Then German suits with Audi lapel badges came along and bought the Bolognese company. Things started to get, well, not sensible exactly, but more serious. Lamborghini suddenly became a company that meant business.

And the first fruit of the Audi era, the Gallardo, brought plenty of business through the door. Indeed, it’s been a real game-changer. Before the Gallardo, Lamborghini was making a paltry 400 cars a year. Last year, over 2500 cars left the Sant’Agata factory. With 14,022 Gallardos made from 2003 until 2013, it’s easily the best-selling Lambo of all time. 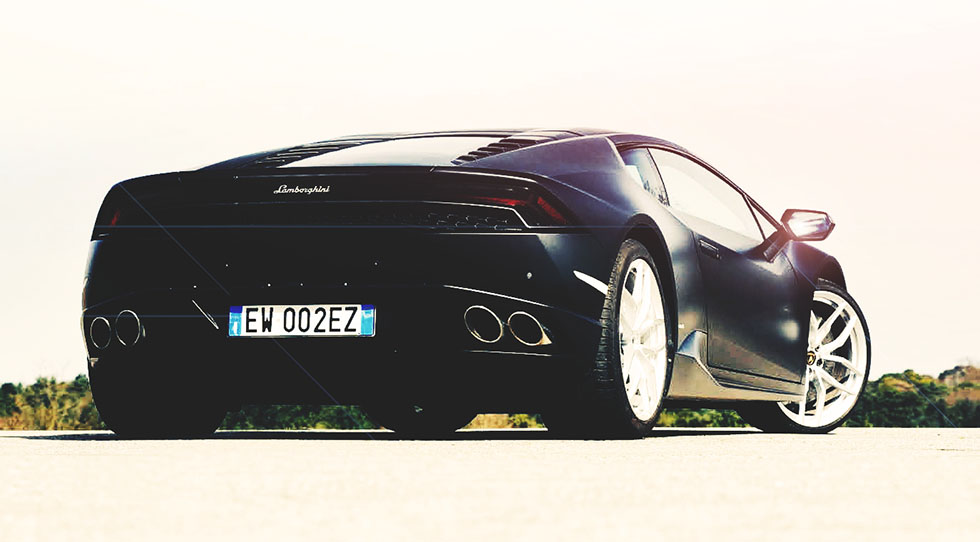 ABOVE: With updated styling and greater refinement, the Huracán is definitely a worthy successor to the Gallardo.

Yes, the Audi years have been good to Lamborghini, even though there might be rather more DNA from the Audi R8 in the Gallardo and its successor, the Huracán, than the engineers of Sant’Agata might care to admit. Ah yes, the Huracán Longitudinale Posteriore 610bhp 4-wheel drive. We’ve driven the LP 610-4 Italy before, but not yet in RHD form in the UK. Time to address that omission right now…

True to Lamborghini’s quirky tradition of naming its cars in Spanish, it says the name Huracán isn’t just Spanish for ‘hurricane’, it’s also the name of a 19th century fighting bull from Alicante. Thinks: why name a car after an animal whose only purpose is to be snuffed out by a man in a frilly costume?

As soon as the Huracán arrives for our test, one thing is very clear: this is a terribly colour-sensitive car. It looks sensational in bright pearlescent colours like Arancio Borealis (orange), Giallo Midas (yellow) or Verde Mantis (green). It looks totally different in the shade presented to us here: Nero Nemesis matt black from the ‘Ad Personam’ individualisation program, which gives the car the look of a menacing insect rather than a raging bull.

The Huracán’s shape is dramatic, but in a reined-in, futuristic kind of way. It avoids the supercar stylecrime of a huge rear spoiler, even of the apparentlymust-have ‘hidden’ variety that pops up at 70mph. Kudos to Lamborghini for creating a shape that’s inherently stable at speeds of over 200mph without such tricks. Another dramatic twist: all the lights on the car are LEDs, which Lamborghini claims as a first among supercars.

ABOVE: The matt black  finish on this Huracán gives the car a sinister Stealth fighter Appearance.

Inside, the cabin looks stunning with its hexagonal-themed geometrics, the start/stop button nestling under its red flap and a huge 12.3in colour TFT screen right ahead of you – all very Millennium Falcon. That screen works brilliantly, by the way, with razor-sharp graphics and a choice of modes: Full (rev counter dominating your view), Mixed (rev counter shoved over to the left for the infotainment and nav to elbow in), and Full Navi (mappage to the fore). The driving position in the tightly bolstered seat is superb, although I’m amazed to find that if you want electrical adjustment for the seat height, angle and cushion length, that’ll cost you extra. I also love the flat-bottomed three-spoke steering wheel that’s crammed, fighter-pilot-style, with all sort of functions, from indicators to wipers.

Underneath it all sits an aluminium and carbonfibre chassis that weighs a mere 200kg. Since the bodywork is in lightweight aluminium and composite, too, the Huracán weighs in at 1422kg, which in modern supercar terms is about par.

So to the engine. One thing very much in the Huracán’s favour is that it’s naturally aspirated. In an age when everyone is flocking to turbochargers to squeeze out extra power and lower emissions, Lamborghini’s nonturbo V10 continues to champion the ideals of sharp throttle response, instantaneous power and linear torque delivery. Thank the dual fuel injection system for that. On start-up and at high revs, fuel is injected directly into the combustion chambers, while at lower loads, it’s injected into the manifold.

There’s an impressive 610bhp of power, which doesn’t arrive until a screeching 8250rpm, while torque maxes out at 413lb ft at a similarly stratospheric 6500rpm. You may appreciate that the LP 610 loves high revs…

Start it up and, at idle, it sounds frankly terrible, almost like a diesel you’re about to head out to Tescos in. The Huracán even has Stop & Start, so the engine cuts out in heavy traffic, just like your shopping hatchback.

Then you spot the ‘Anima’ drive select switch on the steering wheel. Fiddling about with this changes just about everything, depending on which of the three modes you choose: Strada, Sport or Corsa. With each progression up the scale, the throttle valves respond more keenly, sound flaps in the exhaust open up, the dual-clutch transmission holds gears for longer, and there are sharper settings for the four-wheel drive, stability control, steering and dampers.

Sport and Corsa modes are, of course, the most fun, and the sound from the V10 becomes increasingly splendid. The stability control also relaxes itself, giving you the opportunity to feel the chassis doing things beneath you; and you can completely deactivate the system for track use, too.

In any mode, this is a Very Quick Car indeed. Acceleration figures of 0-62mph in 3.2 seconds and 0- 124mph in 9.9 seconds, plus a V-max well in excess of 200mph, prove that. At our test track, the Huracán touches 140mph on the short straight from the banking to the sharp right-hander, which is no mean feat.

While the old Gallardo used Lambo’s e.gear automated manual, the new seven-speed LDF dualclutch transmission (‘Lamborghini Doppia Frizione’) is far more user-friendly. It changes gear in just a few hundredths of a second in auto mode. While you can switch to manual using the large paddles behind the steering wheel, I find myself leaving it in auto mode, as the rev limiter catches me out all too easily on manual up-changes.

If you like your supercar experience to be extremely fast, yet extremely safe, the Huracán is definitely for you. If you like a raw, on-the-edge ride, it probably isn’t (have you considered the Aventador, sir?).

As the ‘4’ in the car’s title indicates, there’s all-wheel drive to help you out. For most of the time, a mere 30 per cent of the torque goes to the front wheels, so the Huracán actually feels like a classic rear-drive car most of the time (and indeed, a maximum of 100 per cent of the torque can be sent rearwards). However, if the rear wheels start to slip, up to 50 per cent of torque diverts to the front wheels. Grip levels are extremely good as a result, helped by a rear mechanical diff lock. Those chunky Pirelli P Zeros (developed specifically for the Huracán) really do bite, and you can really turn into corners with huge confidence. The chassis feels very planted at all times, with just a hint of understeer dialled into it.

Our test machine has the optional Dynamic Steering, but I’m not convinced you should tick the box for it. An electric motor varies the steering ratio pretty dramatically (from 9:1 to 17:1), so it’s very easy to use around town, for instance. However, it also means that the steering feel is very inconsistent, and you’re never quite sure how fast the response is going to be. Also, the way that, on the limit, the electronics ‘nudge’ the steering to curtail understeer and oversteer feels plain odd. Another option fitted to ‘our’ car is magnetorheological dampers, which are worth going for.

Damping forces are varied by magnetising particles in the dampers, which reduces unwanted body roll, and I’d say they work pretty darned well. The mighty carbon-ceramic brakes are great, too, and less prone to the dead-when-cold effect of ceramics in some rival cars. Grasped by six-pot calipers at the front and four-pots at the back, they’re extraordinarily effective.

One final point on the driving front: with a considerable width of 2236mm including mirrors, and a pretty broad turning circle, it’s a surprise to me that parking sensors and a reversing camera are extra-cost options – they really are a necessity in my book.

As Lamborghini’s entry-level model, the Huracán feels far more poised, and far less of a poseur, than certain Lambos of the past one might mention.

It’s got so many aspects of the enthusiast experience absolutely spot on: an all-time great V10 engine (that’s thankfully Euro 6’d without turbos), a cabin with fantastic ambience that’s unique to Lamborghini, and a delightful gearbox whose auto mode works brilliantly. The pace you can cover ground at is impressive indeed.

And yet, it’s very far from being a scary experience. You can drive it in a completely docile manner in great comfort; but even when you turn the wick right up, it delivers unerringly safe handling.

This is car that feels like it’s set up for everyman. If Ferrari guns for edginess and McLaren for usability, the Huracán definitely errs towards the latter. Does that make it dumbed down? I don’t think so: the fact that you can jump aboard the Huracán, and cane it to within 5% of its ultimate performance in total safety speaks volumes for the sophistication of its engineering. There, I used the ‘S’ word. A Lamborghini that’s sophisticated – what’s the world coming to?