German View SUSANNE ROEDER Supersonic luxury. With the 2016 Audi S8 plus, Audi has unreservedly unleashed lavishness and performance to the full in its flagship sedan. Susanne Roeder accepted the invitation to a magic carpet ride…

‘Supersonic luxury’ is how I would like to describe the character of the latest Audi model. Here is a car that does not focus on speed for speed’s sake. Rather, it is the instant availability of speed at any moment and travelling in style that the Audi S8 plus sets out to do, very convincingly.

Audi itself calls this latest addition to the A8 family the pinnacle of sportiness – thanks to its widely proven bi-turbo 4.0 TFSI V8 engine, an engine that in overboost mode for 15 seconds manages to produce 750 Nm, the normal maximum torque coming up to 700 Nm. 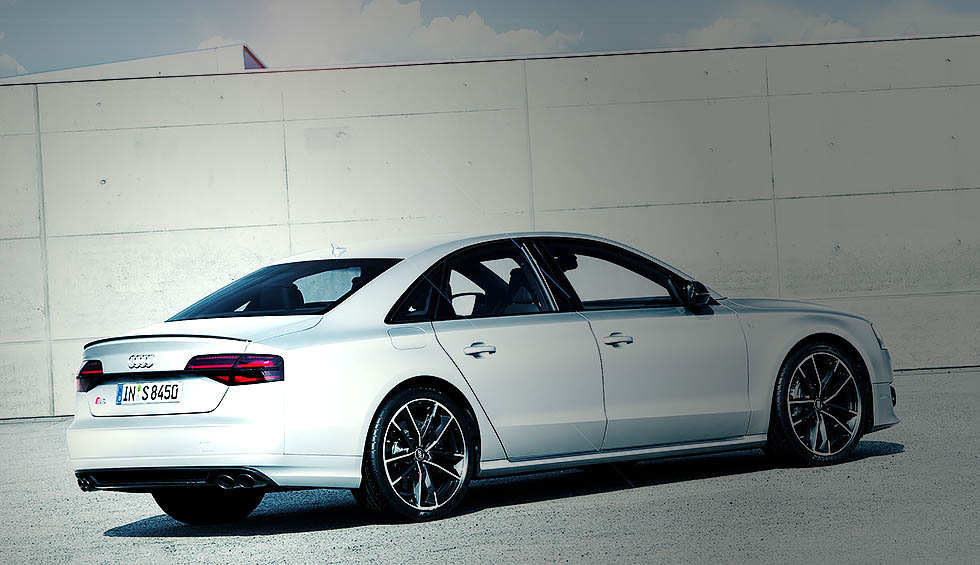 Just put your foot down and the astounding engineering wizardry will have you mesmerized. To feel a large sport sedan ferociously yet smoothly accelerate from zero to 100 kph (62.1 mph) in 3.8 seconds, reaching 200 kph (124.3 mph) in a further 8.5 seconds, is frankly sensational. All of this takes place in incredible tranquility, thanks to the sheer might of the further enhanced V8 engine coupled with a modified powertrain and chassis.

In spite of the A8 family being best in class with an overall weight of 4387 lb, thanks to its lightweight aluminium construction based on the Audi Space Frame (ASF) that just weighs 510 lb, it is still almost two tons that need to be mastered. In terms of speed and agility that is an awful lot. The 2016 Audi S8 plus does it miraculously. Getting out after our first drive of the matt-effect paint finish floret silver beauty, a colour exclusively reserved for the S8 plus and perfectly underlining the contours of the limousine, we were still a little dazed and speechless from the spectacular experience of speed.

So, time to catch some breath and talk about the runner-up in speed, the S8. With 520 hp and a maximum torque of 650 Nm at its disposal, the car needs only 0.3 seconds longer from zero to 62.1 mph, enough performance for most of us. Yet the extra edge, the even mightier thrust forward can definitely be felt in this sharpened version of the S8, which is consequently called S8 ‘plus’ rather than RS.

For the S8 plus, the DNA of Neckarsulm’s top model has essentially not been changed, it has been sharpened. Neither the S8 nor the S8 plus are meant to establish lap records on the Nürburgring Nordschleife. The clientèle for this car is the well-to-do business person who likes to be the driver rather than being chauffeured around – with a definite penchant for driving fast and in style. The ‘plus’, therefore, is not restricted to enhanced performance.

It also refers to the limousine’s sophisticated interior and exterior, with marked subtleties, most notably the discreet yet eye-catching spoiler lip on the rear. For aerodynamic reasons the spoiler was an absolute necessity. In order to beat the lifting forces working on the axles successfully, a further spoiler was invisibly integrated in the front underbody protection. Together, these spoilers vouchsafe a perfect equilibrium even at top speed – as documented during extensive testing on the Nürburgring Nordschleife where all new RS and S models are put to the test.

The car we had the chance to drive was fully equipped with all the ‘plus’ insignia, most notably subtle carbon details on the exterior. The sporty interior is highlighted by the black full-leather interior, with the sport seats accentuated by subtly stylish piping in Arras red mirrored by inlays in carbon twill of that colour.

The essence of this new epitome of luxury is quite simple: The sport sedan is incredibly fast, but does not make extra demands on the driver. This has you arriving at your destination very fast and completely relaxed. However, should there be traffic congestions there is no need to get disgruntled. On the contrary, once you have driven this car you will cherish its sporty yet luxurious demeanour. The interior of the car which answers all one’s demands on modern communication, will easily outdo your office.

Charging ahead with quattro GmbH Expertise over decades has made the quattro engineers attain further refinements regarding the powertrain, which is equipped with a specially tuned engine controller with speed and charge pressure boosting. Furthermore, the S8 plus was given a new exhaust turbocharger with an optimised interior geometry necessary to activate the higher performance of the engine. The exhaust valves also had to be modified to handle the increased temperatures.

The result is a considerable difference between the S8 and the S8 plus regarding the respective curves of power and torque. This difference comes to life on the road where the tangible responsiveness of the still totally smooth driving experience is bliss.

The nice thing about the overboost is that the engine can muster more torque once you press the accelerator by at least 90 per cent in the S mode (D is the everyday diving mode, S for a sportier mode). Thus activated, the engine works under increased pressure which results in a higher torque (plus 50 Nm) for the above-mentioned average 15 seconds – an ideal ‘weapon’ for overtaking with ease. The burst of extra power can be clearly felt when pressing down hard on the accelerator and it is simply amazing how nimbly the huge car charges ahead as if to defy the laws of physics.

The free-revving engine with its comfortably swift responsiveness makes driving a blissful experience. And let’s not forget: It was a must for the S8 plus to be capable of outperforming the S8 when it comes to maximum speed. However, such ‘trivial pursuits’ do not pose a problem to the experienced engineers from quattro GmbH. Their combined expertise meant that the increased engine output eventually resulted in a maximum speed of 305 kph or 190 mph, compared to 250 kph (155 mph) – 155 mph being the governed top speed for the S8.

The measures that had to be undertaken to take the powertrain yet another step further, are familiar to the ‘masters of speed’ at quattro GmbH. ‘We constructed the V8 TFSI with an increased performance of 560 hp already in the RS 6 and RS 7. So we knew quite well where and how to tackle the engine in order to squeeze out yet more performance,’ says Technical Project Manager Jürgen Krauth. And just to prove his point, shortly after the S8 plus there was more to come: the RS 6 Avant performance and the RS 7 Sportback performance made their debut – to answer the demands of all those seeking the racier appearance.

The two new top models in the RS range have exactly the same engine with one minor difference: they have a single-flow intake manifold where the S8 plus has a two-fold intake manifold.

The epithet ‘performance’ is altogether new. With it, Audi means to assign these top models within the RS range a very clearcut identity, namely all of the visual insignia that make out the RS family – taken a sporty step further. And that ultimately takes us back to the Nürburgring Nordschleife, because these cars are made for driving and racing alike.

Same power, different philosophy: plus versus performance. Both epithets denote the very top of a respective model family. However, the focus with the S plus models is on lifestyle. Travelling in style hereby signals the most amenable and sporty manner that Audi can offer.

In Germany, the top speed of 305 kph for the S8 plus is automatically part of the deal, in the UK it is optional. In other words, the British have to decide whether they want the 65 kph of additional speed. Considering the severe speed limit on British motorways of a tedious 70 mph, buying the extra speed with the dynamic package either makes the Brits downright masochists or perhaps frequent night riders on the German autobahn. If all else fails, there might still be the odd disused airfield nearby that could serve as the perfect battleground for uninhibited inebriation with speed. Whatever the case, whenever needed the S8 plus definitely has sufficient hidden reserves.

Here is a limousine that has you massaged in your seat while sedately leaping from zero to 62.1 mph in 3.8 seconds!

The colour of sound

Further increase in power means that carbon-fibre reinforced ceramic brakes are a must in the S8 plus with 190 mph top speed. Rather than going for flamboyant colours, it is in keeping with the overall subtle demeanour of this luxury sedan that colouring is subdued – stretching as far as the brake callipers. They are anthracite-grey with the Audi ceramic logo. And, pleasing to the ear, the package also includes a sport exhaust system which quattro GmbH modified to make the ‘plus’ heard, by assigning it an unmistakably sporty V8 sound. The ‘plus sound’ could perhaps be described as beefy and burbling, mighty and sonorous, with the sport exhaust system adding a somewhat hoarse and throaty tone that is not as penetrating as in the RS models.

Increased power and velocity necessitated a modification of the steering. Yet, as Jürgen Krauth emphasises: ‘Our objective has never been to metamorphose the S8 plus into a race car.’ In order to make the most of the power-boosted V8 engine, the quattro drivetrain has been fitted with a sport differential. As we could not compare the S8 with the S8 plus, we had to take Krauth’s word for it that the steering has become slightly sportier in the S8 plus, without changing the essential DNA of the top model. Both the adaptive air suspension sport and dynamic steering have been modified.

This is where MMI comes into play. The Dynamic Shift Programme (DSP) is linked to the route data provided by the MMI navigation, to the effect that for instance the standard sport differential now has two superposition gears that make the eight-speed tiptronic vary the distribution of power between the rear wheels smoothly. In fast curves, on the other hand, the sport differential comes alive – pushing the big sports sedan into the radius. The prevailing driving experience is that of sedate serenity and zest.

In a nutshell: The S8 plus is courting customers in the luxury segment embracing subtle perfection and excellence. In the UK the pleasure of a new kind of supersonic luxury starts at £96,145.

While the sports sedan in full regalia was still reserved for us, we wanted to make the most of it and have another go at imbibing this sense of sporty perfection. ‘Let’s start the engine.’ With these words, Jürgen Krauth and I took to the road again to get some more of that supersonic luxury, a wondrous experience which is exclusively reserved for the sport sedan S8 plus.

‘The package also includes a sport exhaust system which quattro GmbH modified to make the ‘plus’ heard, by assigning it an unmistakably sporty V8 sound…’

‘In a nutshell: The S8 plus is courting customers in the luxury segment embracing subtle perfection and excellence…’

‘Here is a limousine that has you massaged in your seat while sedately leaping from zero to 62.1 mph in 3.8 seconds!’