Forge’s Mk1 VW Golf GTI:  You might be aware of Forge Motorsport’s incredible Berg Cup-styled, 450bhp 20v-converted Mk1 Golf already. But get up close to this beast and things just get even more amazing

The petrolhead church is nothing if not broad, home to those that like their performance motoring thunderous and supercar shaped, individuals only happy when cutting apexes and shaving tenths of a second off their lap times, and those merely in it purely for the enjoyment it brings them. Think about it; say the term ‘petrolhead’ to the average person in the street, and he or she will reply with any number of car kinds, types and models; Ferraris, modified Clios, Imprezas doing lurid burnouts outside out of town industrial estates, Mk2 Escort rally cars, classic Mini tracks cars…the list really is endless. 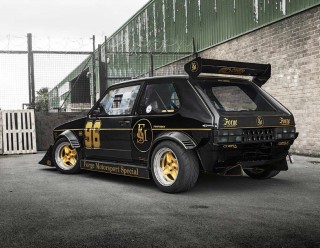 Heartening as this all is, it does pose something of a question, how best to set about building a car that ticks all of the boxes for everyone, all of the time? Is such a car even possible? We’re not sure, but we do know that if any firm has a chance of building it, it’s Forge Motorsport, makers of the UK’s most unhinged Mk1 Golf – the one you see before you. There’s a very good chance that you’ll be well aware of the Forge Golf, a Mk1 GTI bought by the Gloucestershire tuning legends some 6 years ago, then turned into a manic, full-blown Berg Cup style racer. It was car which didn’t merely showcase Forge’s skills and range of stunning billet alloy parts, it also showed just how vibrant and capable the UK’s aftermarket community was, and was therefore a fully paid up show-stopper from the moment it broke cover.

“It’s a car that will always occupy a special place in our hearts as it was one of the first real Forge Motorsport ‘project cars,’ one we set out to make a big impression with back in 2012,” explains Peter Miles of Forge Motorsport. “The only problem with the car was of our own making, namely how to set about improving and refreshing it, particularly as it was loved by car fans of all types and tastes.”

Don’t go thinking that Forge has accidentally chucked the baby out with the bathwater though, as nothing could be further from the truth. This is rather neatly reflected in the engine, a trusty VW 1.8T 20v. Make no mistake, the 1.8T is a comparatively old engine and one that’s been a fixture of the modified VW Group world for very nearly two decades, but it’s still capable of delivering the goods, particularly if you happen to have access to Forge’s back catalogue of tuning parts! 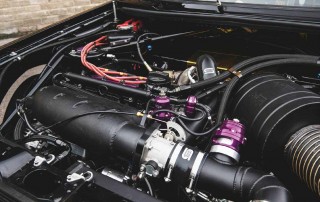 “We’re in the fortunate position of having access to some of the best VW Group tuning parts out there, largely because we make most of them,” explains Pete with a chuckle. “That meant that we really could’ve plumped for any VW engine we fancied, yet there’s something undeniably special about the 20v; put it down to collective nostalgia on our part, but we always felt it an intrinsic part of the Golf’s essential character and something we were keen to preserve.”

Indeed, a brief look at the spec of the engine in the Forge Golf reads like a wish list of key 20v parts, with a 2.0 TFSi crank and 83mm JE pistons nestled in a bored and stroked block, Mahle motorsport grade bearings and ARP fixings. Up top you’ll now find a wholly uprated valve train, while a beefy 70mm Jenvey throttle body keeps the manic, high-revving lump well fed. The icing on the cake is undoubtedly the turbo (the standard KO3 having been relieved of duty long ago), an Owen Developments GBT- 5465-HTA, Nortech manifold and a Tial housing.

That’s an exotic little list by anyone’s standards, yet the 20v also benefits from a smattering of Forge’s own choice hardware, including a front-mounted intercooler, turbo-back exhaust and cold air-box and feed (all bespoke, naturally), not to mention Forge branded oil coolers, breathers and a water-cooled piston 44mm V-band external wastegate, the latter very much a signature product for Forge.

The result of all this engineering tomfoolery? A hefty, 911-shaming 450bhp, enough to please all but the most ardent of supercar fanciers, and plenty in a car with the kerb weight of a half empty pack of John Player & Sons. (See what we did there…?) Said power is routed through an appropriately sophisticated transmission, one crowned by a trick Wavetrac Limited Slip Differential, the latter doing its best to dole out all the shove evenly between the front wheels! 330 hp at low boost – high boost is a big number around 450.

Power alone won’t please everyone though, which rather neatly leads us to what might just be this Golf’s trump card – the way it looks. No, we’re not going to pretend that its be-winged, aero-honed appearance will appeal to everyone, but even its most committed detractor would be hard pushed to deny its visual clout and road presence.

“We didn’t set out to build a car that everyone would love every single thing about, but we did want them to at least respect what we’ve attempted to build, and I think on the whole we’ve been successful,” muses Pete. “The aero stuff was probably the point of no return in this respect, the real ‘Marmite modification’ and the one from which there was no going back from.”

Much of the original car’s ability to stop passers by in their tracks derived from its extreme (albeit undoubtedly effective) collection of wings, splitters, dive planes and diffusers. The vast majority of these have been retained, albeit re-manufactured in high-grade carbon fibre courtesy of the guys at HR Engineering. The full list of carbon parts runs to the side skirts, front bumper, rear diffuser, spoiler mounts and rear wing extrusions. There’s more – much more! Not content with carbon-cladding the wings, Forge then opted to have the doors, bonnet tail-gate and roof rendered in Carbon-Kevlar, changes which drastically cut the cars overall weight and, just as importantly, look ridiculously cool.

“Obviously reducing overall weight was one of the biggest reasons for going down the carbon fibre route, and there’s no doubt that it’s been effective; we haven’t had a chance to put it on the scales quite yet but it probably comes in at between 740 and 760kg.”

Impressive as all of this doubtless is, it would be remiss of us to come all this way without also touching upon the most obvious change that’s been wrought upon the Forge Golf, one which is likely to please anyone with 4 Star coursing through their veins – its paint job! Those of you over a certain age will remember this livery in its original form, plastered all over the likes of the Lotus 77 and 78; big, hairy-chested competition cars with brutish power delivery and no concessions whatsoever to ‘nambypamby’ driver aids likes traction control or ABS. No, we’re not trying to suggest that Forge’s Golf is a modern day interpretation of the Lotus 78, but the team quite clearly drew inspiration from classic Lotus F1 cars when it came to picking its livery.

“As I said, we couldn’t hope to build something that everyone would adore, but I’ve yet to meet a single petrolhead that didn’t have a soft spot for the black and gold of the JPS livery! We’ve put our own slant on it though, it’s far from a complete copy for the Lotus F1 cars.”

The eagle-eyed amongst you will no doubt have noticed that Forge has also tweaked the Golf’s wheels, and the car now sits atop a suitably painted set of one-off, 9x15in Rotiforms. They’re home to a brake setup of Forge’s own creation, one which pairs 280mm discs with six-pot calipers, more than capable of hauling this buzz-bomb of a car to a stop in less time than it takes to say ‘lots of trouble, usually serious.’

So, is this a car that will appeal to self-styled petrolheads of all colours, creeds, ages and tastes? Probably not, no, but it does at least get close. As Pete’s made clear throughout, it’s a car which everyone should respect even if they can’t fully appreciate it, though from where we’re standing it looks, goes and sounds the part. The UK’s ultimate Mk1 Golf just got that bit meaner! 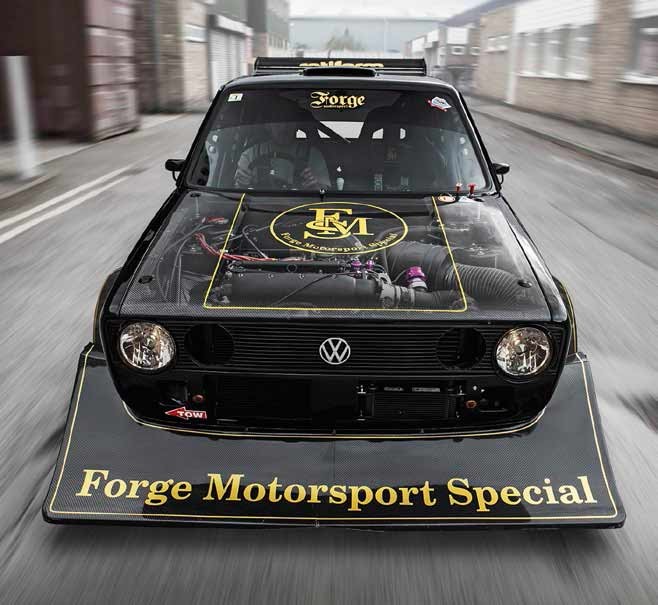 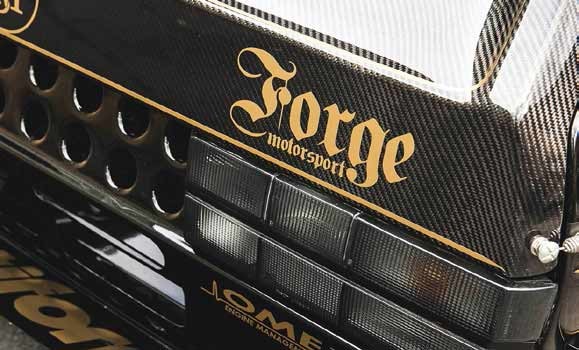 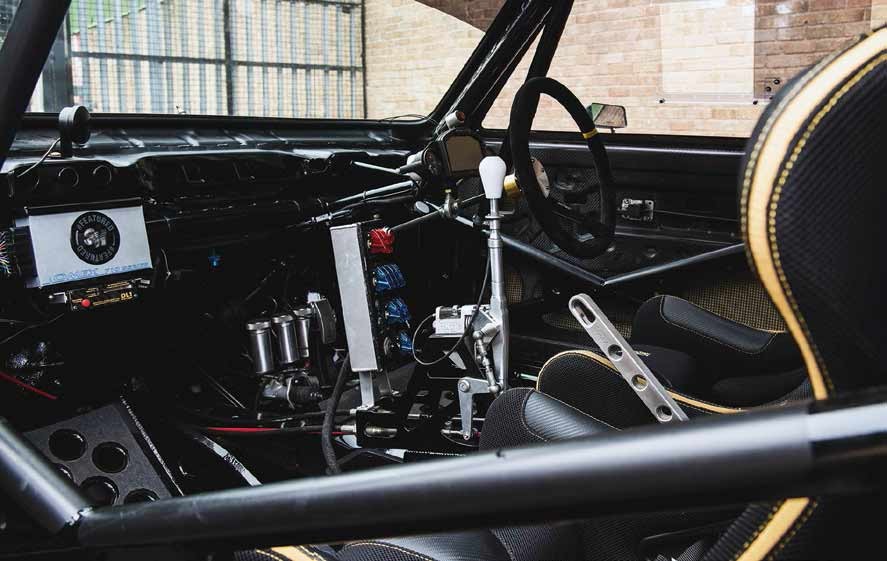 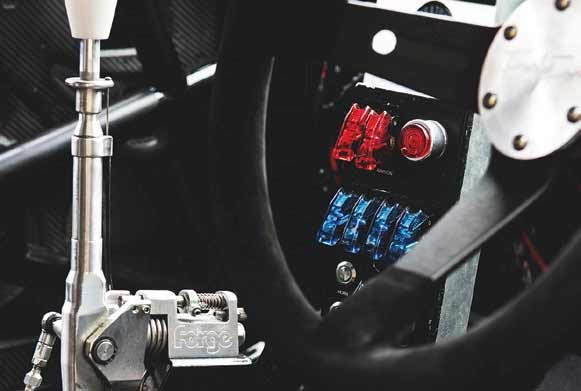 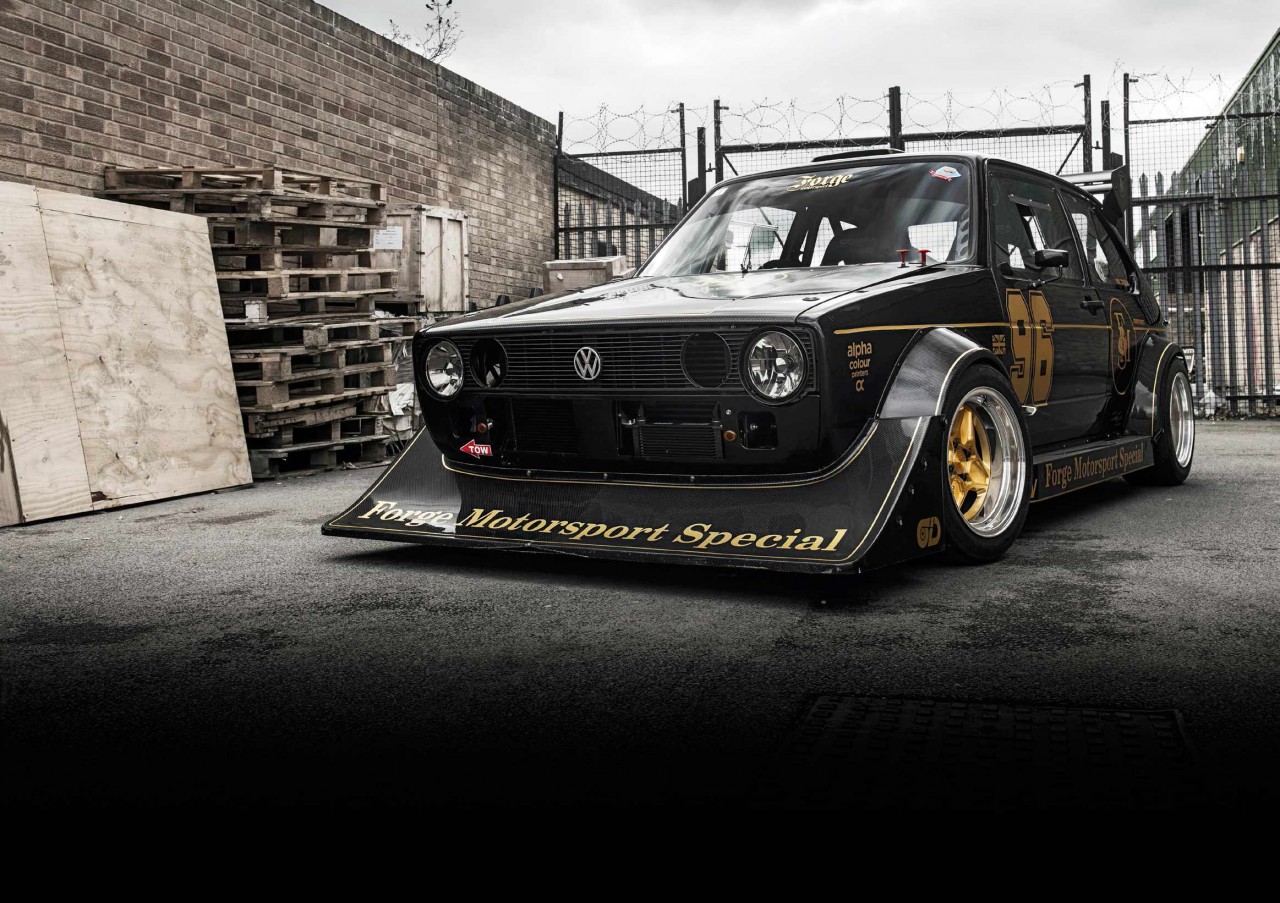 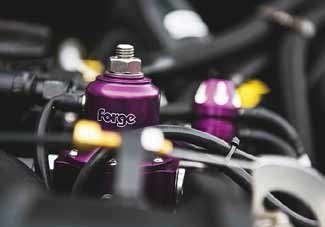 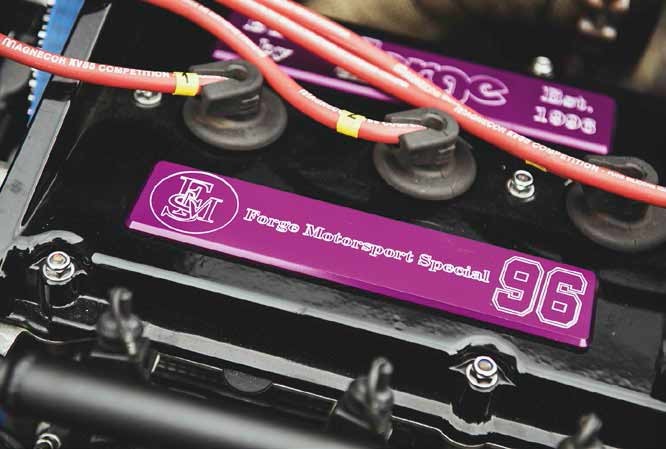 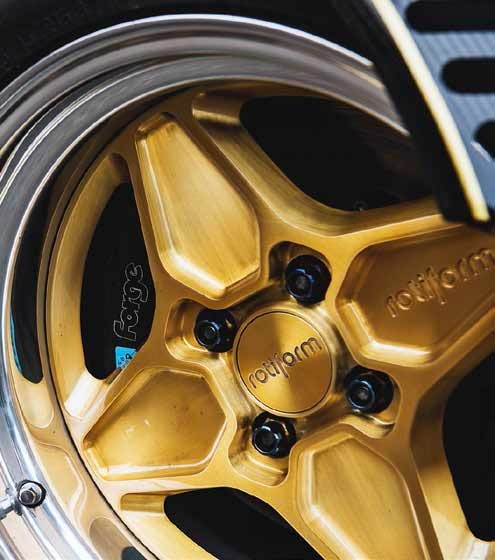 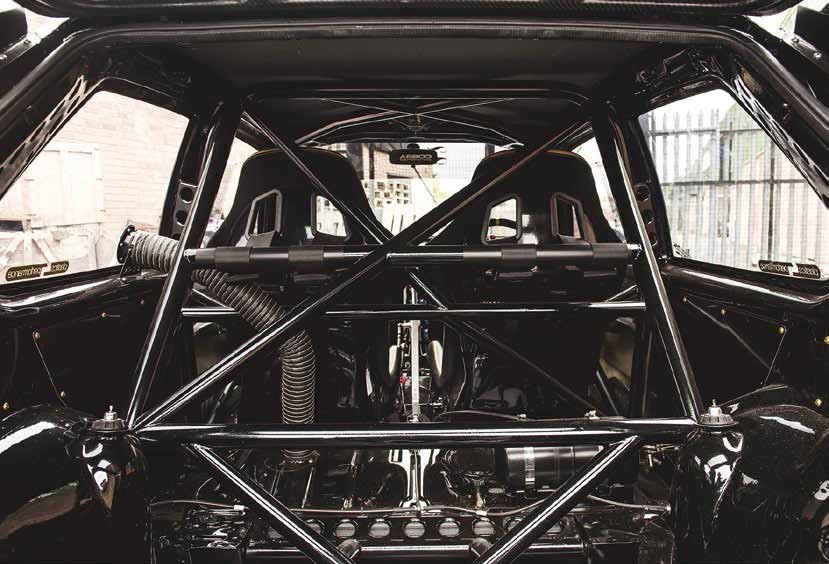 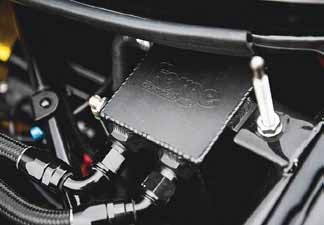 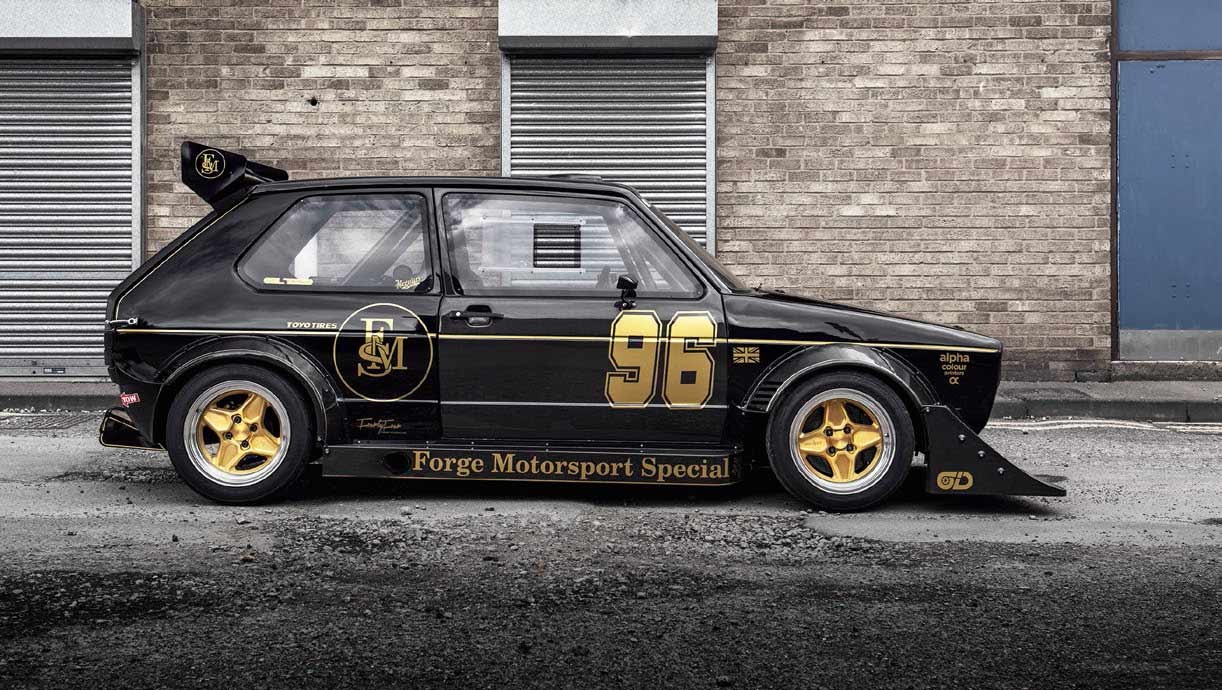 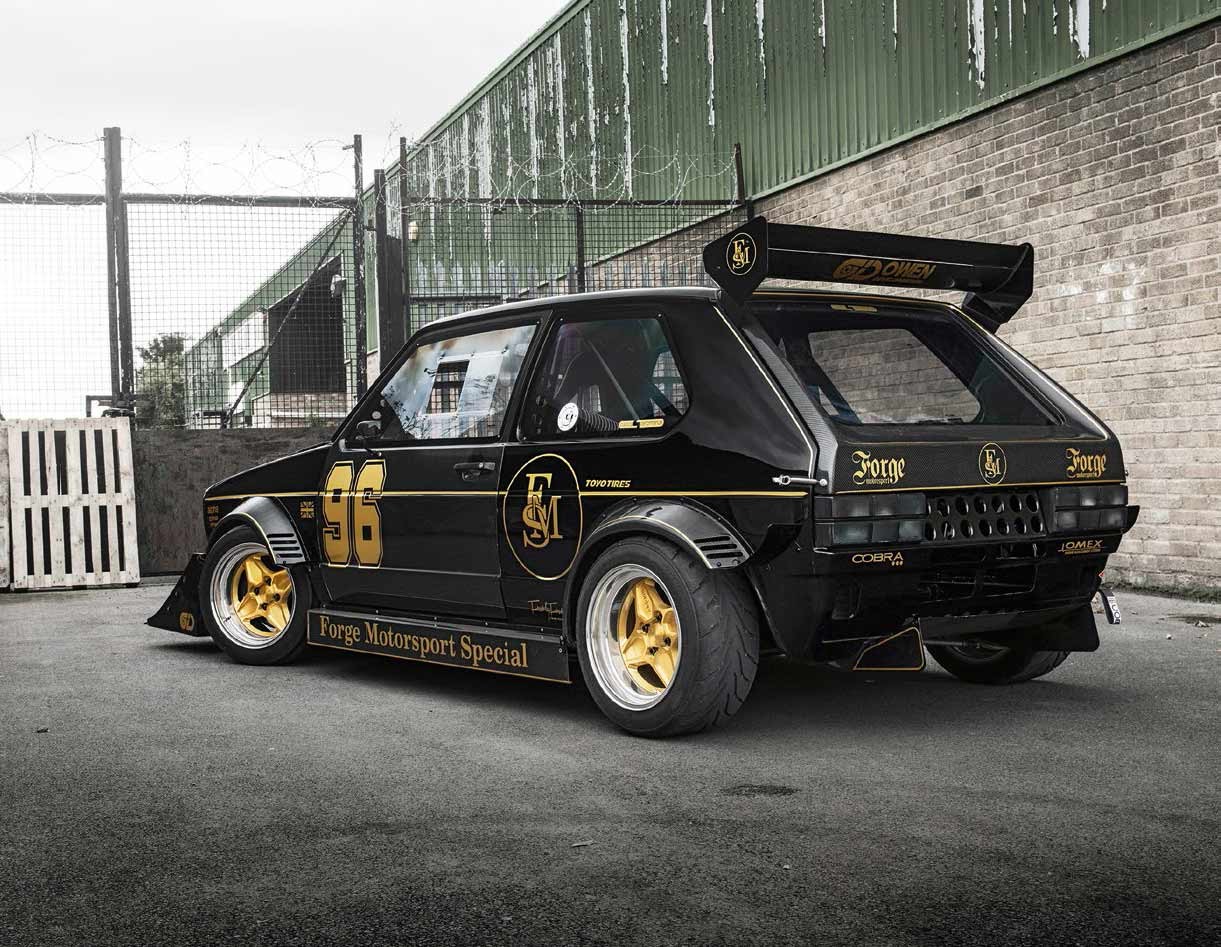 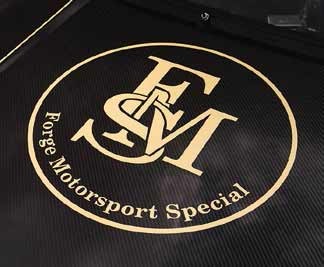 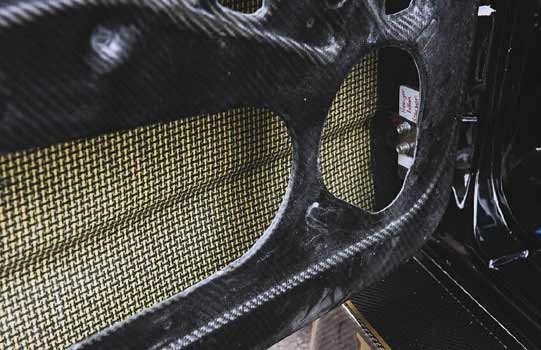 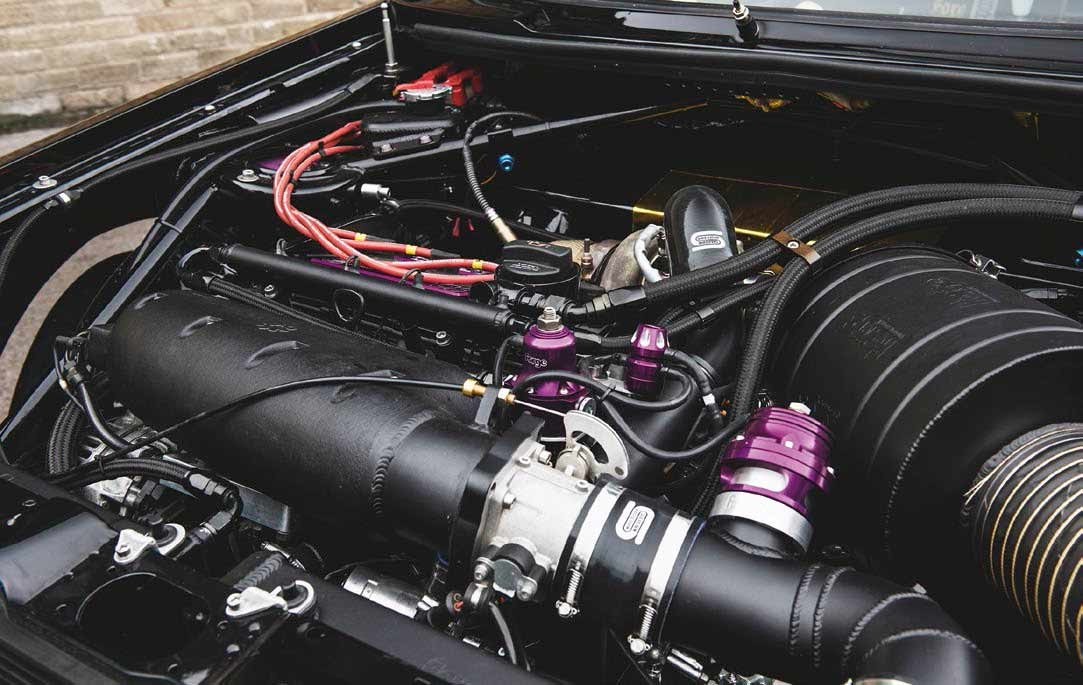 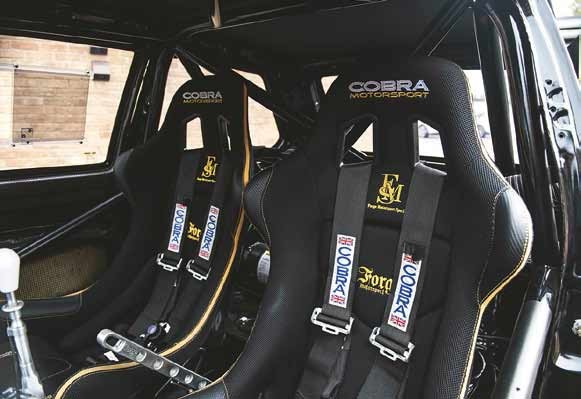 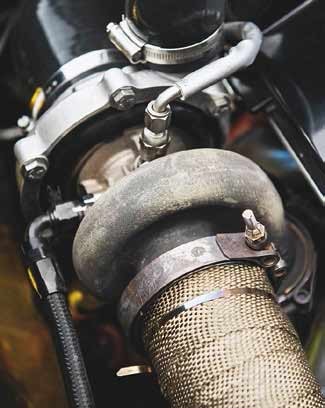 Above: custom Rotiform four-spokers set off the retro exterior nicely.

“…we really could’ve plumped for any VW engine we fancied, yet there’s something undeniably special about the 20v”

“Not content with carbon-cladding the wings, Forge then opted to have the doors, bonnet tail-gate and roof rendered in Carbon-Kevlar”