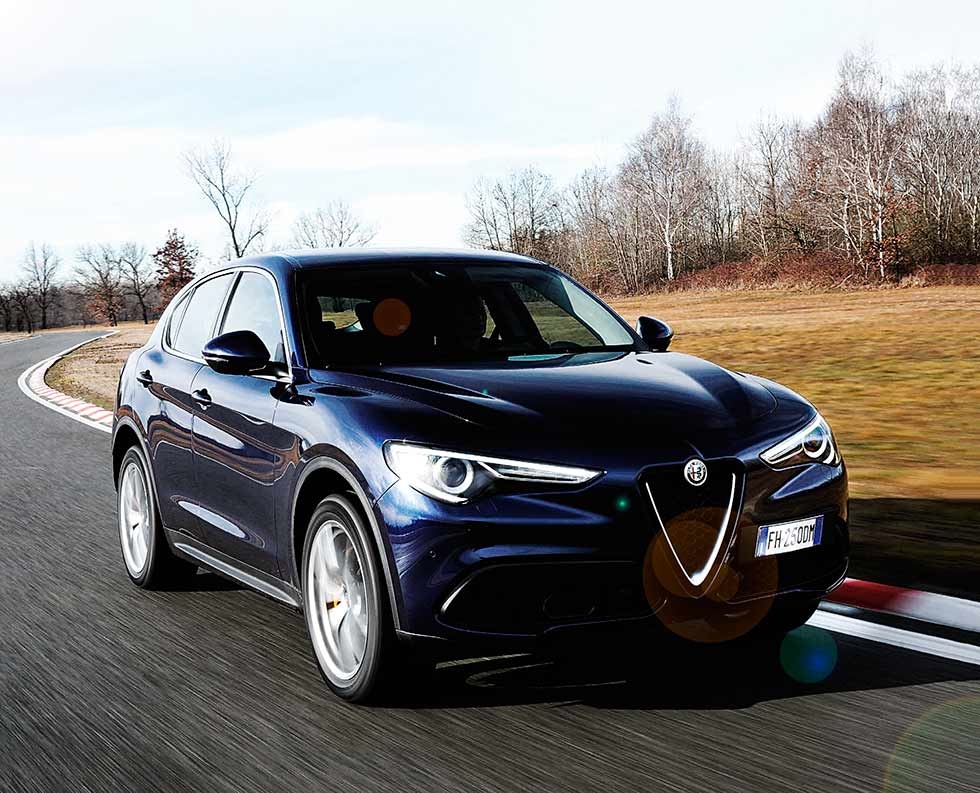 Alfa Romeo Stelvio At last, Alfa’s BMW X3-rivalling SUV is here. We head to the test track to find out if the Stelvio has the heart of a true Alfa. Story by Richard Bremner. Photography Michael Ward.

Alfa Romeo Stelvio  What do we think? Read our first road test!

There are several surprising things about the Alfa Romeo Stelvio. One is that it’s here at all, given the (well-intended but often ineffectual) torturing of Alfa’s plans over the past few years, and how long it has been since we saw the decidedly shapely Alfa Kamal crossover concept. That show car appeared fully 14 years ago, and it’s a little painful to think where Alfa might be today had it launched this appealing SUV shortly afterwards.

But this is no moment to get morose about Alfa’s troubled history. The marque is now enjoying the launch of not one but two mainstream models based on the rear-wheel drive, premium quality platform long required: the Giulia saloon and Stelvio crossover are triggering what should, finally, amount to a substantial rejuvenation of the brand.

Another surprising Stelvio fact? That its chassis has been engineered to provide almost exactly the same dynamic experience as you’d enjoy in the equivalent Giulia, but while you’re sitting 190mm higher. So claims ex-Ferrari engineering chief Roberto Fedeli. Given that the Stelvio is a taller vehicle than the Giulia, as you’d expect of a crossover, that’s quite an achievement, because its centre of gravity should be higher, and its propensity to roll greater, unless it’s kitted with Isambard Kingdom Brunel-specification springs and dampers. But more on this later.

One very good reason why the Stelvio’s road behaviour should at least part-mirror the Giulia’s is that it shares the same structural roots. Both cars are built on the so-called Georgio platform architecture, and much of their basic design and engineering was carried out at the same time to optimise the platform not just for these two but a cluster of models, says Fedeli.

So the Stelvio’s mechanical layout is fundamentally that of a rear-drive car: its engines are arranged longitudinally to drive the rear wheels, with a transfer case and a differential motivating the front axle. The Stelvio has been set up to drive like a rear-drive model too, with all the engine’s torque bound for the rear wheels unless sensor-detected traction issues require an active transfer case to direct effort to the front pair, which can take up to 50 per cent of the thrust.

There are a few more surprises besides, but we’ll get to those later. To give the Stelvio some context, it’s aimed at the Audi Q5, the BMW X3, the Jaguar F-Pace, the Mercedes GLC and the Porsche Macan. That’s well-armoured opposition, but in the case of the Q5, X3 and GLC, the Alfa certainly has novelty on its side, the brand as fresh-faced as Jaguar to this fast-swelling section of the market. What the Stelvio also has on its side is power, and heaps of it.

At launch there will be two engines, both driving eight-speed paddleshift automatics and all-wheel drive transmissions. The 2.0-litre petrol turbo serves up no less than 280hp and 295lb ft of torque, while the 2.1 diesel musters 210hp and 346lb ft. The result is some rather startling acceleration times for a family wagon, the petrol broaching 62mph in 5.7sec, the diesel not far behind with 6.6sec. Apart from outright power, one reason for this impressive performance is the Stelvio’s relatively low weight, the petrol registering 1659kg, the diesel just one kilogram more at 1660kg. For comparison, the largely aluminium-bodied Jaguar F-Pace 2.0 diesel weighs 1775kg.

Most of our driving is done aboard the petrol, partly because it’s more Alfa-like, partly because it has more poke and partly because diesels appear to be sinking into an emission-triggered decline. This is a smooth engine that soon produces strong acceleration and mild rortiness to go with it. Don’t expect the tuneful thresh of an old Alfa Twin Spark, but the sound of induction – or something like it – is there and provides the Stelvio with an obvious sporting flavour. At least as satisfying is the way this engine muscles up momentum, its fat reserve of low-end torque emerging usefully below the 2250rpm peak to provide assertive go almost regardless of gear. The same is true of the diesel; even if it’s a little less quick, this engine is also pleasingly civilised. It doesn’t have the petrol’s revvier zip but it’s very effective when coupled to the standard eight-speed auto – there’s no manual.

Ratios are automatically shuffled unless you pull at a sizeable pair of fixed-position aluminium paddles (optional, and worth it) that further underline the Stelvio’s sporting ambitions. These become still more apparent on the Balocco test tracks that are Alfa’s home test territory. The Stelvio has the fastest-acting steering gear in its class, says Alfa, and you can immediately feel its wieldiness, near-instant response and contained body roll, all of these encouraging you to drive the SUV with the verve of, well, a Giulia. Which means that it’s not long before your speed and ambitions build, to reveal a couple more of the aforementioned surprises.

The first appears when the throttle is gunned while departing a tight left-hander. The Stelvio’s not insubstantial tail jinks sideways, to be near-instantly caught by the electronic netting of the ESP anti-skid control. What you also feel, all of a sudden, is the pulling power of the front wheels, the drivetrain’s brain rousing the front axle to share the tractive load. The torque transfer isn’t crude, but you can certainly feel it, which is as things should be aboard an Alfa.

The entertainment value of this tight-bend, tail-out situation can be amplified by swiveling the rotary Alfa DNA dial towards dynamic from normal (the third mode is eco), which prompts the usual sharpening of reflexes and loosening of the ESP ties. So, another lap, another sizeable prodding of the throttle and the rear-end predictably slides further offline. If you’re quick, there’s enough time to apply the correction yourself. If you’re not, the electronics will do the job for you. It’s not possible to turn the ESP off altogether. That’s probably wise, given that this is a family car whose occasional non-driving occupants are unlikely to thank you for mild drift indulgences on greasy roundabouts. But the fact that you can enjoy such moments in a car with cupholders, shopping hooks, a power tailgate, room for five and an off-roader’s hill descent control is unusual among the fattening shoals of crossovers.

You can, however, experience a mildly less welcome effect if you tackle that same tight bend by entering it slightly too fast. A slice of sliding understeer comes your way, and it’s slightly more insistent than might be expected, although Balocco seems a little slipperier than usual. The chance to experience the same thing at rather higher speeds emerges on Balocco’s longer, faster and entertainingly three-dimensional test track, which throws off-camber bends, savage dips, launching crests, tightening turns and fast sweepers at you.

The Stelvio is decidedly un-SUV-like around here, feeling agile, deft and decidedly brisk. You can sense what it’s doing through your seat, and more so than via the wheel, which provides precision and consistent resistance. But like most modern systems, there’s not much feedback from the road below. The Alfa is no less entertaining on this faster track, and confidence-inducing too. The rear-end won’t step out unless you provoke it, but a fast-sweeper certainly spiked your reporter’s heart-rate when the Stelvio began a run0wide slither towards the Armco at over 80mph. The ESP gently intervened, but this wasn’t the slippage expected at these kind of speeds.

Speeds that you’re unlikely to be seeing on real roads unless you’re craving a court appearance. Tracks are misleading too – particularly Balocco’s – so it will take a test on UK roads to confirm that for the most part, the Stelvio is an entertainingly well-behaved machine. It will also require British bitumen to determine whether Alfa has found a way to stiffen a crossover’s suspension without ruining its ride.

Fedeli explains that, despite its extra height, the Stelvio shares the same roll axis as the Giulia, making it less likely to lean than many crossovers, and that it’s fitted with special long-stroke shock absorbers that help preserve the suppleness of the ride. On these mousse-smooth tracks there was no hope of corroborating that, but there’s encouragement to be drawn from the fact that the Stelvio has been extensively tested in Wales, Scotland and England, says Fedeli, who would presumably not reveal such things if he wasn’t confident.

Chassis dynamics have been one of Fedeli’s many challenges, but among the biggest, he reveals, has been imbuing the Stelvio with an aura of quality, which has been as much about educating engineers, designers and those who actually make the car as it has specifying this Alfa correctly in the first place. That starts with the very rigid body that provides “a guarantee of quality over time,” to quote Alfa’s official wording, promising a freedom from the squeaks and rattles that can develop as less structurally robust cars age.

Poking and prodding the cabin materials reveals plenty of high-quality, soft-touch mouldings, aluminium décor that is real metal and as you’d expect from Italy, there are beautifully trimmed seats and an exqusite steering wheel with a perfectly positioned starter button. There isn’t quite the consistently high finish an Audi interior presents, but it’s more than good enough.

There’s also plenty of space front and rear, a long and uniformly shaped boot – although its sides are well inboard of the Stelvio’s wings, losing width – and the convenience of a standard-fit electric tailgate. The rear seats can be released from within the boot, although this is of limited use because they don’t automatically fold, in contrast to some Hondas.

The Stelvio is nevertheless a well-rounded machine. It’s roomy, refined at speed (wind noise heard in one car was less obvious in another), comfortable – ride not withstanding – well-equipped, practical and has a reasonably good infotainment system. And with either of these two engines, it’s quick. Above all, though, the Stelvio provides an enjoyably diverting drive. Just like a good Alfa should.

The 2.1-litre diesel engine (above) provides a highly impressive 210hp of power, so it’s properly quick. The Stelvio’s platform may be all-wheel drive but it delivers the driving dynamics of a rear-drive car. You sit 190mm higher up in the Stelvio than you do in its sister model, the Giulia, but it’s still a sporty beast.