Fiat may not be inextricably linked with sports cars, but it has a rich history of producing chic and affordable roadsters. Unfortunately, it also has an annoying habit of bringing such machinery to market, only to lose interest almost immediately. The delightful Barchetta is a case in point. Achingly pretty, fun to drive and surprisingly practical, it was nevertheless only ever offered in left-hand-drive and there was nothing so frivolous as a choice of engines. If that wasn’t enough, UK dealers were rather more interested in selling bread-and-butter hatchbacks than two-seater ragtops. As such, the Fiat Barchetta never was going to worry British, Japanese and German rivals. 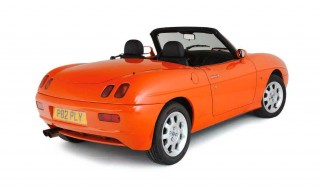 The thing is, independent firms and private individuals imported them to Britain in large numbers.

What’s more, Barchettas have long since outlived their ‘used car’ status and are now considered desirable modern classics, and with good reason. When the wraps came off the Barchetta in 1995, it was well received for the most part. Like the 124 Spider that preceded it, here was a pretty and relatively uncomplicated sports car based on running gear robbed from mainstream fodder, in this case Fiat’s front-drive Punto. As such, it was met with a degree of huffing and puffing from the diehards who claimed that it wasn’t a real sports car; that it was simply a hatchback in lingerie. The press, however, loved its lack of pretention and were impressed with its hangs-on-even- when-the-tyres-are-on-fire handling. Sure, some disliked its distinctive catfish-like maw, but the rest of us thought it was rather lovely.

Scroll back to 1990, and Fiat Centro Stile had been tasked with creating a proposal for a sports car based on the Punto ‘Tipo B’ chassis, then still in the design and development stage: this in time became known as ‘Tipo B Spider 176’. Renderings were then whittled down until two contenders emerged, both apparently named after pizzas. The Marinara was decidedly more retro in outlook, with definite nods to the 850 Spider of old. The unlovely Diavola, meanwhile, resembled a chop-top version of the Fiat Coupe and was as ugly as that sounds. 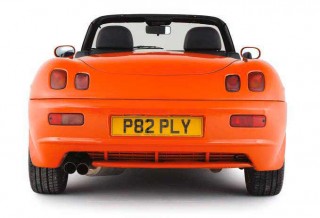 In the end, a variation of Andrea Zapatinas’s Marinara won the toss. With an appropriate embrace of both past and present, its classically-influenced styling proved a hit. There was even talk of the winged Carrozzeria Touring logo being applied to the finished product, the connection being the Barchetta tag (the beltline creases are pure Touring-bodied Ferrari 166MM…). But this never happened: the build was subcontracted to Maggiora in Chivasso, which produced them until the firm folded in 2003. The Barchetta then received a make-under for a relaunch in 2004, production having by now been brought in-house to Fiat’s Mirafiori plant. This unfortunate facelift consisted of a larger, more conventional front grille and a tailfin-cum-brake light scarring the otherwise shapely rump. Production officially lasted until June 2005 although, truth be told, it had ended long before then: dealers were simply offloading old stock. Around 57,000 cars had been made in all.

Of these, official UK imports accounted for only 1500 or so units, if figures are to be believed. There’s every reason not to trust them, given that it was widely reported in period that Fiat UK sold only seven Barchettas in 2001… This woeful lack of success could in part be attributed to the flood of private imports: why pay £14,000 when you could land one yourself from the Low Countries for just shy of £10k and drive it home?

These days, the Barchetta makes for an intriguingly left-field classic, especially when compared to mainstream rivals such as the Mazda MX-5, MGF and (shudder) BMW Z3. Mechanically, it’s robust, the 1.8-litre 16-valve four-banger being allied to an easy-to-guide five-speed ’box. The engine was, in essence, an Alfa Romeo Twin Spark unit without the extra spark. And while 130hp may not sound like much, the Barchetta tipped the scales at only 1056kg (2328lb) if the factory figures are to be believed. As such, it can sprint to 60mph from a standstill in 8.6sec and on to 124mph outright. 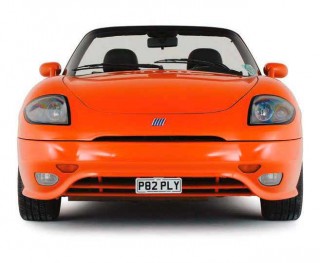 Fiat may have been stingy when it came to engine options, but the Barchetta was offered in a variety of different spec and trim levels. Base models were sold elsewhere in Europe, some of which arrived in the UK as private imports, and lacked ABS as standard.

Nevertheless, all Barchettas came with power steering and electric windows. A raft of deluxe models including the imaginatively named Limited Edition of 1995-1998. Despite the nomenclature, it was essentially a higher-spec production model with alloy wheels, leather trim and a special colour palate. The high-spec Riviera (1998-2001) and Milano (2001 on) had superior trim, although some enthusiasts preferred the less pimped-out cloth trim and rubber floor editions.

Despite its less-than-daring mechanical set-up – MacPherson struts up front, trailing arms out back – the Barchetta is a hoot to drive on testy back roads. The steering is perhaps a little over-servoed, but direct nonetheless, and the fat boots offer more grip than most owners will likely ever need. Push really hard and it’s fundamentally an understeerer but not of the epic variety. Punt it into a corner and the outside front rubber takes the hit first. Ease off a little and the nose gently tucks in – about as unthreatening as cars get. You would have to do something pretty stupid to get into trouble. Of course, with so little weight on the rear end, you can get the back to step out but it requires provocation. The gearchange came in for criticism from some quarters when new, but it’s hard to understand why. The pedals, meanwhile, are perfectly placed for heel-and-toeing. UK-spec cars, all of which came equipped with ABS, stop well, too. If anything, the Barchetta is over-braked as the rear anchors have little to do. As such, it isn’t uncommon to see cars with rusty rear discs.

This sporting Fiat is not without imperfection: it can get a little bouncy over topographical nastiness, with some rebound, but it isn’t excessive. You also sit rather high compared to many other sports cars of the day, but it is very comfortable. The seats really are very supportive, despite appearances. The engine note is a little disappointing, though. The 1747cc DOHC ‘four’ is a gem, revving off its axis to 7000rpm, but it sounds rather ordinary. It deserves better; something that bit fruitier.

Despite the uninitiated (ignorant) insisting that Italian cars are unreliable, the Barchetta is not prone to throwing hissy fits. The author covered 250,000 miles over 14 years in a ’98 private import, tackling everything from a regular stop-start cross-London commute to track days and pan-European thrashes without any issues. According to marque authority, Paul de Turris of DTR Sports Cars (the man who perhaps did more than anyone to popularise the model in the UK in period), the cars are pretty robust, if not without their niggles.

“The variator which controls the inlet valve timing should be replaced after every other cam belt change,” he says. “They last a lot longer if the oil is refreshed at least twice a year and, importantly, if the engine is flushed at the same time. The cam belts will most likely last five years plus, but the tensioner bearing that they run on will not. The belt fails because the bearing breaks, not because of the belt itself.

“The worst problem areas are the front floors by the jacking points and inner sill edges. They rarely get repaired properly as this means taking the whole interior out. The floors rot because the rear slam panel seals get torn [where the hood fouls them on closing] and lets water into the car, which goes to the lowest parts along the inner sills and floors. The seal is about £250 itself and should be viewed as a service item. The rear inner wheelarches tend to write the cars off financially, tell-tale signs being rust bubbles on the sill line and wheelarch lips. Not good.”

Are there any value differences between models? “The most valuable are low-mileage LEs or European-market Rivieras or Milanos. A perfect, sub-30,000-mile silver LE may sell for upwards of £9000, facelift cars for a bit less: £5000-£8000. Most early cars nowadays fall into the ‘just scraped through last MoT’ category and can be had for around £1500-£3000.” 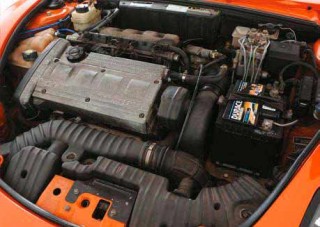 Spares aren’t necessarily plentiful, though. “Most non-service parts are getting very hard to find. No rear wings, facelift bumpers, rear suspension arms or trim parts are available [off the shelf]. Fiat is not obliged to keep parts more than ten years after production of a particular model stops, so it unloaded all unsold Barchetta parts in 2015.”

Barchetta ownership isn’t without its caveats, then, but buy carefully and you will be rewarded with a pretty sports car; one whose praises have not been sung high enough. Throw in a roof that can be erected or lowered in no time at all, and a boot that’s large enough to swallow a long weekend’s luggage, and it’s hard to come up with reasons why you wouldn’t want one. What’s more, the Barchetta has aged better than most affordable sports car of its generation. Try one; you may just like it.

THANKS Paul de Turris, DTR Sports Cars, www.dtrsports.com for his help and to Aldo Diana for making his Barchetta available – see classifieds for details 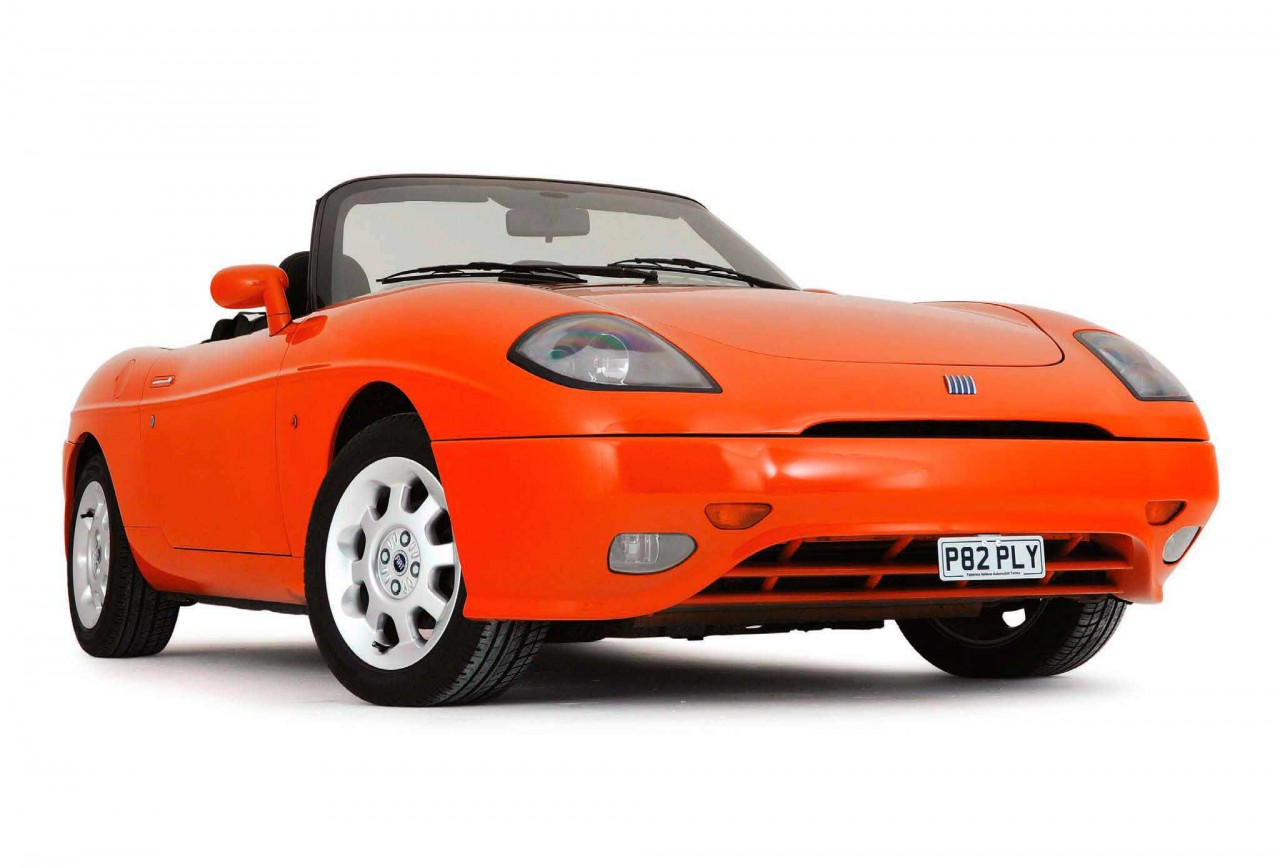 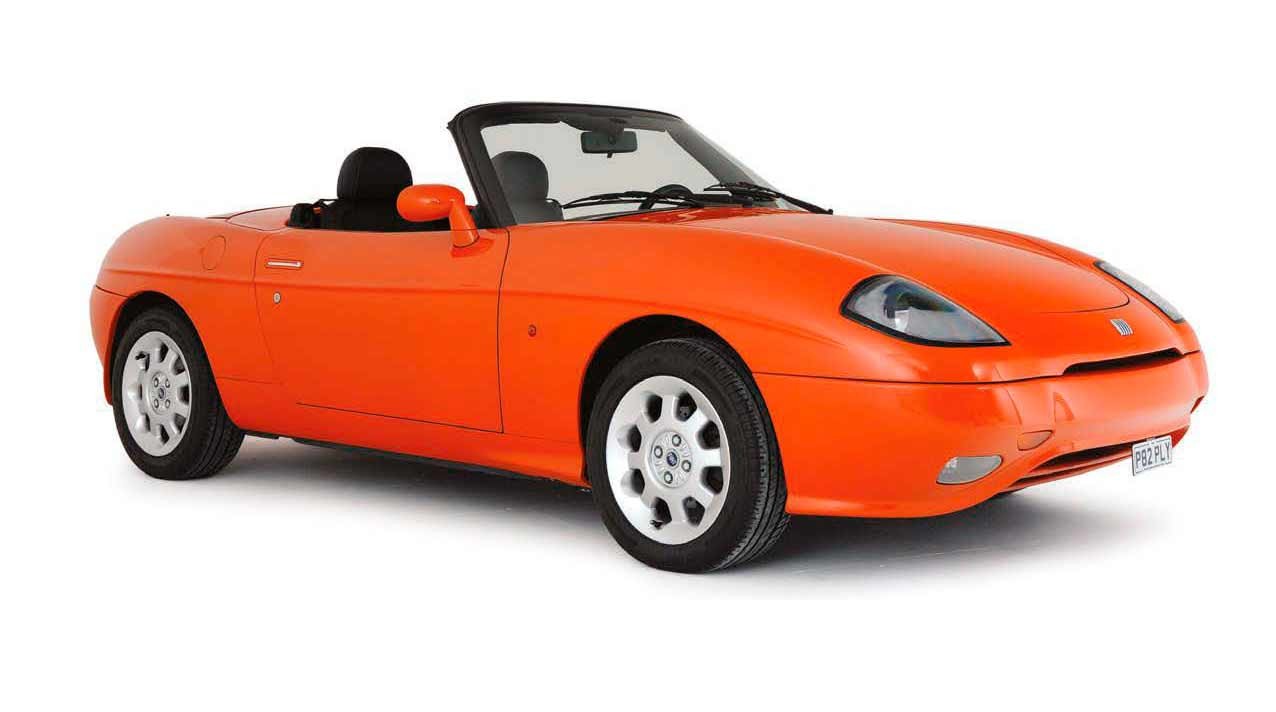 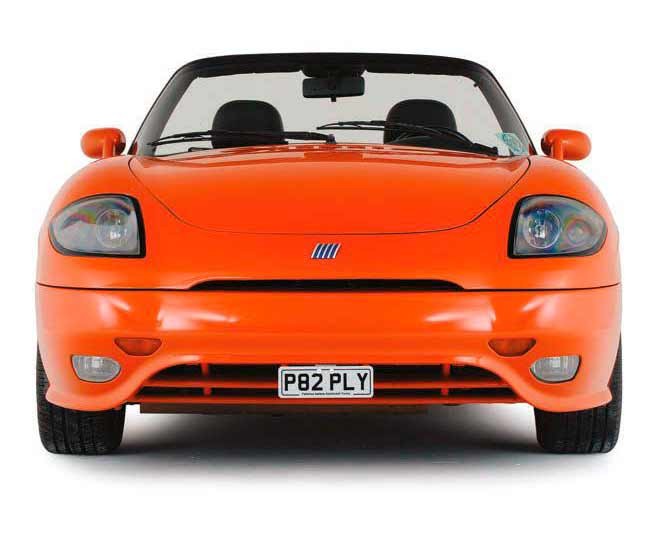 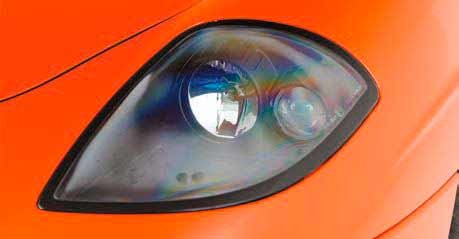 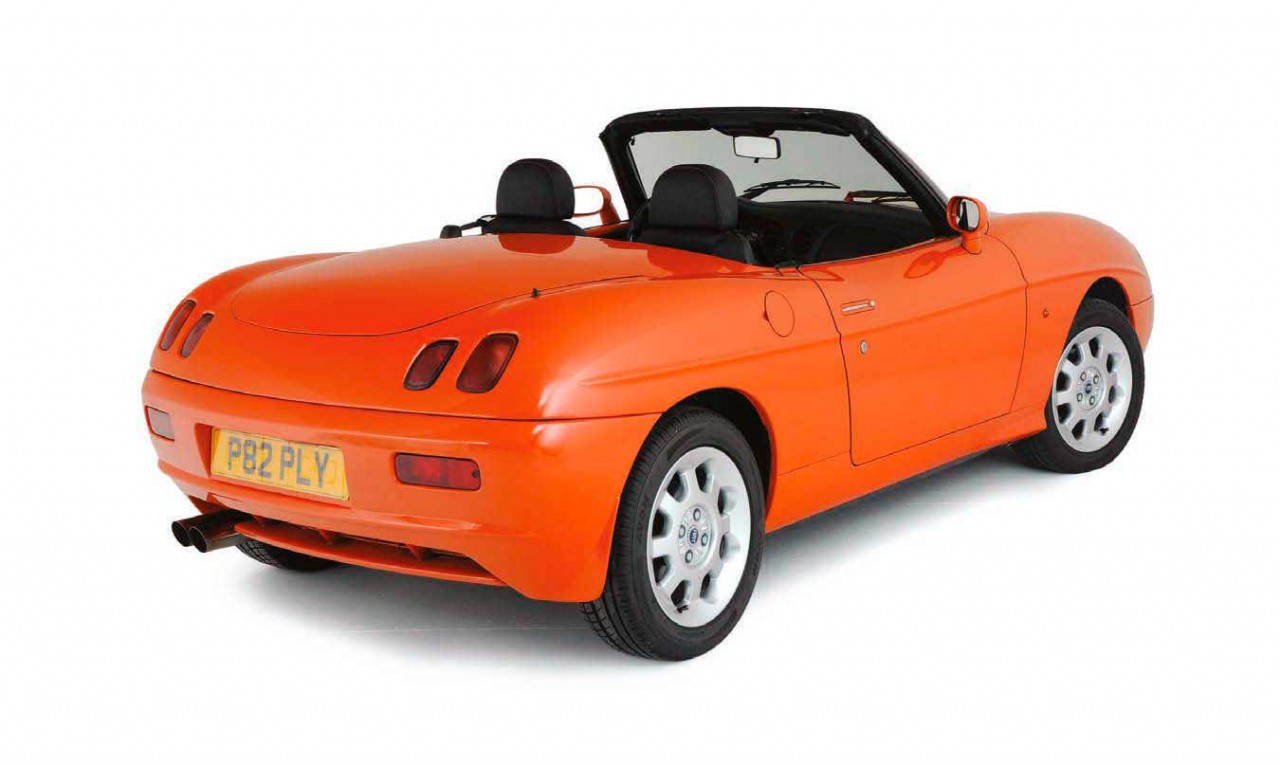 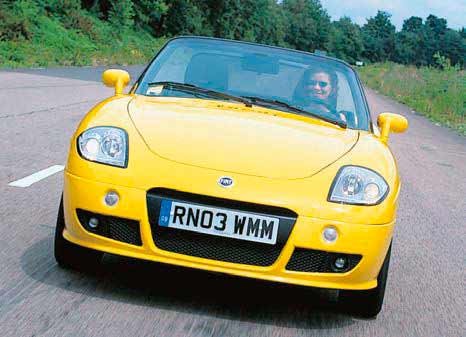 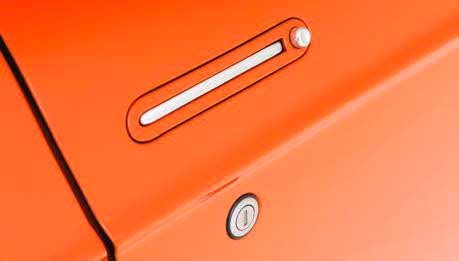 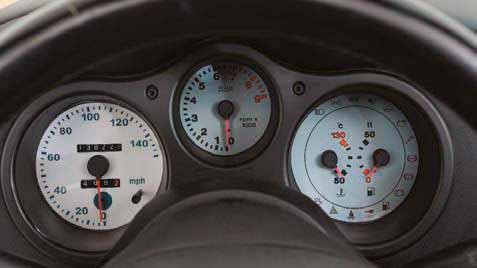 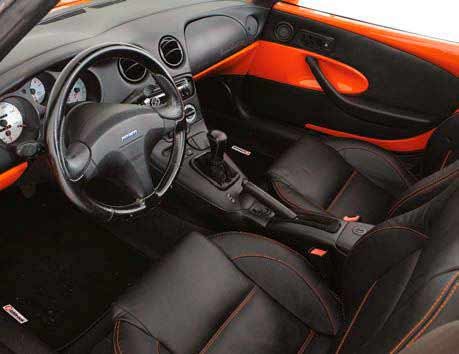 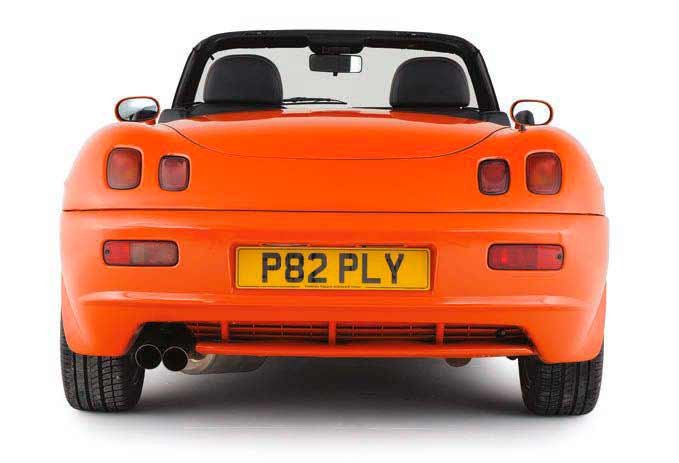 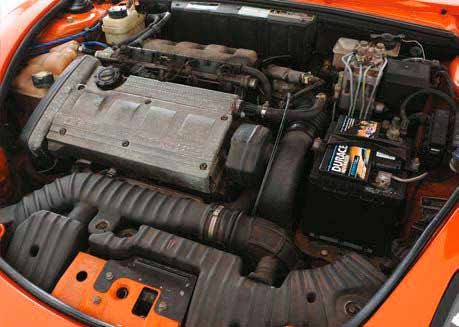 ABOVE: facelifted version from 2003 features an odd-looking brake light nodule on the boot lid.