Allow me to begin on a personal note: I like the 993 Carrera RS. A lot. I was chauffeured to church on my wedding day in a Clubsport version, before my wife-to-be arrived in an Audi R8 Spyder driven by my father-in-law. The 993 is a shape that tickled my fancy when I was still at school and in the years that followed, I realised (and have come to further appreciate) how special these cars are. Having said that, the first modern Porsche I experienced, albeit from the passenger seat, was a Gen1 996 GT3, and therefore, to my mind, the 996 GT3 RS is just as alluring personally as the 993 RS. 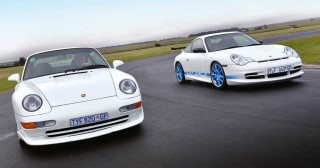 The 993 Carrera RS, to give it its full name, was unveiled at the 1995 Amsterdam Auto Show. Porsche intended to build 1,000 examples to qualify for the homologation in the national N/ GT competition class. The original base car (M002) featured a new front bumper and spoiler in conjunction with a rear wing that led to a reduced aerodynamic lift of close to zero.

Compared with the standard 993 Carrera, the RS was approximately 100kg lighter. Deleted features included power windows, central locking, headlight washer system and the audio system speakers, to name a few. Even the driver and passenger airbags were optional. The front lid was made of aluminium and the glass was thinner, while the driver and passenger both sat in bucket seats that saved a substantial 30kg. Needless to say, the rear seats and seatbelt systems were also deleted, as was some of the sound deadening. 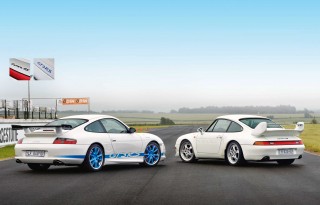 However, Porsche also aimed, and succeeded, in making the car more comfortable than its hardcore 964 predecessor: its suspension setup was more pliant. The 993 Carrera RS also came standard with a limited-slip differential; the soft curves of this RS made the “RS Cup Design” wheels stand out better. Below the engine cover, the bore size was increased from 100mm to 102mm while the stroke was left at 76.4mm, resulting in an engine capacity of 3,746cc.

The gearbox was carried over from the Carrera and actually features taller gearing from the first to third ratios – an optimal setup for track use. As was the case with previous RS models, the 993 was closely associated with its racing siblings and 993 Cup cars were put into competition across the globe, a fact that it shares with its successor, the 996 GT3 RS.

We know the 996 generation wasn’t universally loved at first, so after two years of water-cooled 911 production, Porsche answered its critics with a Gen1 996 GT3 – the first time the Zufenhausen firm used this nomenclature on a car. However, this was closely followed by the Gen2, and then ultimately by the 996 GT3 RS – based on the Gen2 – which was unveiled in 2003. 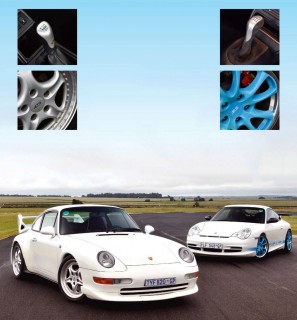 It was probably one of the only RS models that featured less modifications when compared to the car on which it was based. Still, it was 20kg lighter than the Gen2 996 GT3, owing partly to the use of a carbon fibre bonnet and more reduced sound insulation. Standard features included a half roll cage (or a full roll cage on request) and an adjustable carbon fibre rear wing, which added some downforce at higher speeds.

To make the GT3 RS’s stance even more motorsport-inspired, Porsche only offered the car in Carrera white, with the option of red or blue side scripts and wheels. It also featured improved suspension geometry with the new, reinforced hubs of the GT3 R race car and two-piece front and rear transverse arms. The springs and dampers were further tuned for the RS and the ride height, camber and toe angles and anti-roll bars were adjusted for track use.

The 996 GT3 RS also featured vents just below the bonnet, which allowed hot air to escape from the radiators and reduced lift at the front of the car. On the opposite end, the rear wing featured an air scoop that directed the air flowing over the roof to the engine. Meanwhile, the rear window was made of polycarbonate while the side mirrors also featured carbon fibre housings. The visual similarities between the 996 GT3 RS and its Cup version, or any other period 911 race car equivalents, are immediately visible. Below that rear wing resides one of the most celebrated and respected engines in Porsche’s street car line-up.

The 3.6-litre flat six was derived from Porsche’s Le Mans winning GT1, designed by none other than the renowned engineer Herr Hans Mezger, and power was upped to 386hp (82hp more than the 993 Carrera RS). As I would soon experience, Porsche went to great lengths to make this engine as free revving as possible. Fine-tuning resulted in less friction and a weight reduction of the moving components allowed the rev limit to be safely raised to 8,200rpm. Lower inertia forces also led to the deletion of the crankshaft vibration damper. This is all geeky stuff, of course, but reading it is enough to make my mouth water and my palms sweaty when I think about driving this RS. 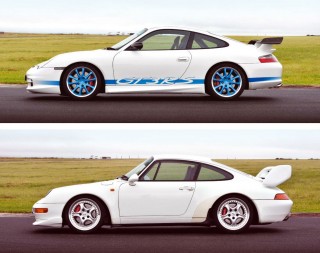 The wet conditions we are experiencing en route to our track test outside Johannesburg are far from ideal. As the 993 RS’s front tyres plough through heavy rain on the highway, the GT3’s rear wing is barely visible… I force myself to drive in a relaxed manner; after all, the car’s extremely valuable. Fortunately, once most of the photography has been completed, the track starts to dry and patches of dry tarmac can be seen along this tight circuit. I opt to drive the older car first and climb in on the left-hand side of the Carrera RS. The two-tone leather bucket seat keeps me perfectly in place, while the bottom cushion offers more comfort than some of today’s seats. The cabin is simplistic and devoid of any unnecessary equipment, but it exudes solidity. Once on the move, there are no rattles or squeaks emanating from the cabin (or any sections of the car), which is impressive for a 20-plus-year-old car, even though it has covered only 35,000 miles.

The gearlever slips easily through the ratios and it only takes a few throttle applications to realise how happy the engine is to rev. The car feels light on its feet, and as the first few corners present themselves, the car darts from corner to corner with little input from the steering wheel. Furthermore, as you sit so close to the side window, A-pillar and windscreen, you feel particularly connected to the car and realise how compact it is.

As the first decent straight presents itself I let the engine rev all the way to the 6,800rpm redline before I change gear. The brakes do an excellent job of slowing the car down; I need to be careful with my steering and throttle input as the track is far from dry…

There are brief moments of understeer but a marginal reduction in throttle input eliminates it. But that is all you should do: just apply your right foot with forethought and the understeer disappears. I’ve driven this car in much better conditions and even then, the grip levels are not that high – the polar opposite of modern 911s. With my first driving stint at an end, I bring the 993 RS to a standstill, pull on the red door strap (a feature that again reminds you that you have just driven something special) and open the lightweight door.

The moment I climb behind the wheel of the 996 GT3 RS, it’s clear the car is closer in age to the Carrera RS than today’s 991 RS. The dashboard and interior have moved on from the 993, but overall it is very basic in terms of layout and features. Behind me is the half roll cage with its cross members and I’m pinned in place by the fire-retardant Recaro bucket seats, which are even tighter than those in the 993. At the top of the seats are neat cloth Porsche crests and the Alcantara-clad gearlever and steering wheel are overtly motorsport-inspired addenda; pleasingly purposeful elements arguably amiss in the Carrera RS. The 996 is fitted with a single mass flywheel and a rather aggressively-tuned limited-slip differential. As I start this 26,600-mile GT3 RS up, it emits a louder and more mechanical sound than the 993. I soon get into a rhythm with the GT3 RS and realise that its main driving attributes are similar to those of the 993 RS. 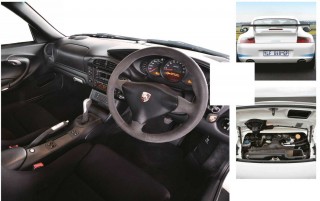 Make no mistake, however, the car’s ultimate grip levels are higher and, most notably, its engine revs with a level of vigour that the 993 RS can’t match. It positively yearns to be taken to the 8,200rpm rev limit and you can even play with it below 6,000rpm to experience the torque that is on offer. Again, small throttle inputs are required through a corner, but over a lap or two I realise that I just need to be sensitive to the car’s demeanour and trust the differential to put the power down. It is a fine balancing act, but one I and any enthusiast will revel in.

The brakes feel strong and the nose barely dips when you apply the brakes. Gear changes, again, can be executed with minimal effort, while the turn-in response to the steering inputs is sharper and more direct than in the 993. The fact that you have additional power and slightly more torque available results in a more exciting track experience than that of the 993 RS. Still, there is a vast gap between the 996 GT3 RS and its modern equivalent. You will undoubtedly learn its limits quicker than in the modern-day 991… 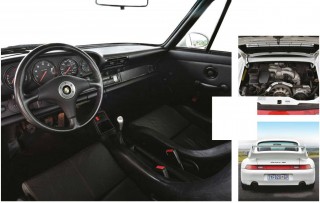 Although both cars command serious asking prices today, I think we’ve probably seen the 993 Carrera RS hitting a ceiling in terms of growth. The same might be true of the 996 GT3 RS but there could still be room for it to increase in value compared with the 993. Ultimately, I found the 996 just that bit more enjoyable as a track car. I welcomed the additional performance, even if the car is marginally heavier than the 993. It might be compromised as a road machine, at least more so than the 993 RS, yet in terms of that all-important performance the 996 is a genuine improvement. I’m given the choice of which car I would like to drive from the racetrack back to the owner’s garage, and it’s the 996 GT3 RS that I elect to take. Who says water-cooling was a bad idea?

Thanks Total 911 would like to extend a special thank you to Red Star Raceway for availing us their facilities. Visit them at redstarraceway.co.za.

Above Porsche only offered the 996 GT3 RS in Carrera white, with red or blue side script and wheels. Below The 993 RS achieved a top speed of 172mph and had a 0-62mph time of 5.0 seconds. Right Motorsport-inspired rear wing features an air scoop that channels airflow to the engine. Below right The 996 GT3 RS’s 3,600cc engine produces 386hp and 385Nm of power and torque respectively. Left 993 RS’s cabin is smaller and far more cosseted than 996. Nomex seats and alcantara all ooze motorsport appeal. Right 993 RS featured new rear wing that led to a reduced aerodynamic lift of close to zero.

“The996 is just that bit more enjoyable as a track car”

Negatives: Not usable on a daily basis. Might be too hardcore for some buyers.