Who’d have thought it? Last August, a minimal-miles, hyper-original example of Peugeot’s definitive hot hatchback sold at auction for a whisker under £31,000, bringing an army of hopeful sellers behind it asking hitherto unimaginable prices for unmolested examples. Shortly before that a restored one made £25,000 at another auction. Suddenly the 205 was the hottest of hot properties, leapfrogging the former sector barometer, the Mk1 Golf GTI, into a whole new level of serious-money collectability. 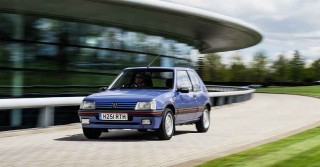 It was probably the biggest proportional value-leap per unit of time ever seen with a classic car, and in the aftermath came briefly perhaps the broadest spread of asking prices one model has ever experienced. This is a massproduction hatchback, after all, and to some minds sufficiently modern for unexceptional examples still to languish in used-car doldrums, as a quick trawl of eBay would surely reveal.

Except it doesn’t. The £500 ruins, bodged or abandoned track-car projects, and the terminally tired, seem to have vanished. The Peugeot 205 GTI has broken out of bangerdom for good, and even the saddest case is now a ‘great base for an appreciating classic’.

There are various flavours of 205 GTI but lightness, zingy engine, whipcrack gearchange, razor-sharp steering (1.9 especially) and a super-precise throttle/cornering balance are common to all. So are the pert styling, the neat graphics and the reputation for flying off the road backwards if you decelerate in a bend. This last attribute has been blown out of all proportion over the years; a sensitive driver could always make a fractional steering correction as the cornering loads shifted, and doing so was a central conversation with the GTI’s exuberant talkativeness. On decent modern tyres the frightening oversteer moments rarely happen, anyway.

The 1984 original was a 105bhp 1.6, raised to 115bhp shortly before the longer-stroke 1.9 arrived at the end of 1986. This had taller gearing, effortless torque, disc brakes all round and yet crisper dynamics thanks to lowerprofile tyres and revised offsets for the bigger wheels with fewer, larger holes. The engines weigh practically the same yet there’s no doubt that the 1.9 is an edgier drive, but it’s also a bigger thrill, and prices reflect that.

Other variables? Later cars could be had with power steering, with a quicker rack but some masking of the intense grip/slip dialogue. In late 1987 came a facelift with a less rattle-prone, more plasticky dashboard and less painted metal in the cabin, but the purity of the original Paul Bracq-designed interior was lost.

None of this matters much. Any 205 GTI will light up your life; no hot hatchback has ever been more beguiling to drive.

Freak auction results aside, top-quality, low-miles, full-history 205 GTIs wear midteens price tags at high-end dealers, their supply being limited. Hovering under £10,000 are cars in excellent condition with proper provenance and usually under 100,000 miles – at which mileage a well-maintained 205 GTI engine should be quite healthy. Half that sum buys a very decent GTI, probably in need of some fettling. Values reflect that 205 GTIs do not benefit from deviations from factory spec.

Accident damage: check panel gaps for consistency, inner wings and boot floor for ripples. The bodyshell resists rust well, but even the youngest is 23 years old. Check the base of the centre pillars, the sills’ rear edges and the quarter-panel above them, inner front wings, the front chassis legs/bulkhead junction, the boot floor and the seam between roof and rear side windows, which can crack.

Mechanicals are tough. Worn bushes, balljoints and linkages are betrayed by clonks, rattles and a sloppy feel. Jack up the rear of the car so the wheels can hang free, then try to rock them to check for wear in the trailing arms’ needle roller bearings. If bad, and the trailing arm shafts or the main suspension tube are damaged, significant expense beckons.

Body trim can be hard to find. Peugeot’s new classic division is planning to have plastic wheelarch lips and such remanufactured.